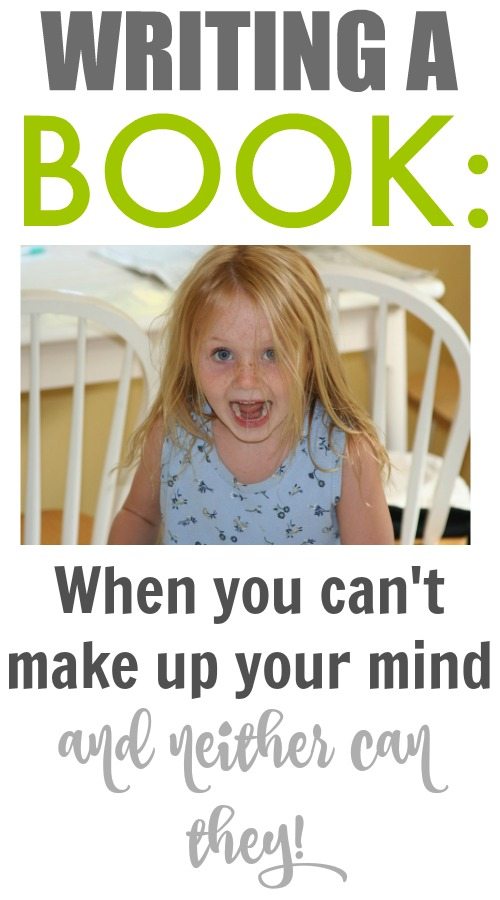 I shared recently that I’ve been working with a publisher on writing my first book these last few months. I thought it would be fun to let you peek in on the process every now and then and tell you about some of the different parts of the whole process. It really has been a huge learning experience for me and (I think) a really interesting little story. And we’re not even halfway through the process yet!

So during my last “book-writing story” installment, I was telling you about all the stuff that happens before you even begin writing the book. You think that’s it’s just a matter of deciding “Hmm, I think I’ll write a book” and then you just start typing away, but when you’re working with a publisher, there’s an amazing amount of back-and-forthing that happens before you ever put pen to paper, or characters to screen, as the case may be. 🙂

So after all of that went down, I was free to start writing this little book to my heart’s content, or rather, filling in the blanks in my already-decided-upon outline. I was happily working away, a little a time, and then I got an email from my publisher one day that really threw me for a loop.

They had this idea. This very interesting idea. And it was not what we had previously decided on when we were first coming up with the concept for the book, at all.

Now, this may not seem like a big deal to you, but as a blogger who basically shares step-by-step photos for almost everything, always, this was kind of huge.

The sales team at the publisher had suggested that maybe we would want to make the book black and white. With no photos. And make it smaller. And make it cheaper.

Well, OK, I liked the idea of making it cheaper, because the more people that can get their hands on it, the better, of course. But I was not entirely thrilled about the idea of having no pictures. Everything I had written up to that point had been done with the idea that there would be big, beautiful photos to inspire you and make you feel like “Yes! I can do this cleaning thing!”, and maybe even some fun illustrations thrown in for good measure. This idea also came at a time when they had just suggested a title for the book that I wasn’t particularly excited about either, so I wasn’t really the happiest of campers. I kind of, almost, sorta just felt like giving up on the whole thing and that’s just not something I would normally do, like, ever.

So we decided to get on another phone call and talk the whole thing out like civilized people instead of emailing politely back and forth while I secretly had a mini panic attack every five minutes thinking about this whole thing. I was actually looking forward to the call. I was thinking that surely they must have some kind of amazingly brilliant explanation for why we shouldn’t make my book beautiful and photo-filled, and as soon as I heard it, I would completely understand. But of course, that was not the case. Why is it that these phone calls always catch me so off guard?

It turns out that the only real thinking was that there had been another book, also about cleaning, that was in that same smaller format and it didn’t have pictures, and it was available at that lower price point and it had done quite well, so they were really just toying with the idea that maybe that was what readers would respond well to. And also they were thinking “How do you really show cleaning and homekeeping techniques in a photo anyway?” For some reason that last thought really struck a nerve with me, maybe because that’s what I do here on this blog, you know, pretty much all the time. And so I insisted there be photos. I insisted that beautiful shots of clean imagery, and tidy spaces for inspiration were key to the readers’ experience. I insisted that I knew what readers of this type of content would be motivated by and would find actually useful in their real-life lives because I am a reader of that type of content!

So being the reasonable people that they are, the publishers said that if I was really passionate about it, there would be pictures. And it could have been as simple as that.

I said I would mull all these things over for a few days, and I would look at the cover design they would show me too and see if I felt any better about that title that I had said I hated earlier. So they sent the cover design over, and some examples of how the pages of the book might look in that black and white, no-photo format, and I got to mulling.

I guess they got to mulling a little bit as well, and so they asked me to send over about 20 examples of the kinds of photos I would put in the book if we went the photo route. At some point in our conversations I had just offered to do the darn photos myself if that would make it easier for everyone. I never want to cause any problems, so I was really just trying to sound helpful, but nevertheless, they asked to see 20 photos to take a look at my photography and see if they could have me do the photos myself.

After our few days of pondering, I realized that these people were the experts and they probably knew what they were talking about when it came to book formats. I also realized that my book would probably actually stand up to being in just black and white because it is pretty entertaining, if I do say so myself. So I wrote to them to tell them that I was fine to go ahead with the no photos thing, and maybe if we could just do a few sparse illustrations here and there as visual cues for flipping, that would be perfect. And then I didn’t hear from them for three weeks, so I just assumed that was what we would do.

So, I was kind of enjoying all of the quietness on the book-front and getting back into thinking about focusing all of my efforts on my blog again, kind of stressing over that crazy title, kind of stressing over whether or not they were going to make me re-write the whole book, and just not thinking about the photo issue at all. But mostly just trying to enjoy the quiet. 🙂 And then there came the email that changed everything. Again.

I mean, I said I would take the photos and all, but I didn’t think they’d actually let me. I mean, I take pictures all the time, but they’re always just really casual, in-the-moment kind of things while I’m doing something that I needed to get done around the house that I thought you might be interested in reading about on the blog. It’s my profession and all, but I’m not like a professional. But maybe that’s a good thing. I mean, it’s my book, so it should probably look like my book, right?

…and that was exactly the post that I was about to publish and share with you, finishing right there, until yet another twisty turn happened in the ongoing saga of this book writing adventure!

So, here’s everything that happened after I wrote the first part of this post, but before I managed to hit “publish” on it. 🙂

I completed the first 20 or so photos and sent them in to be reviewed to make sure they were what the publishers had in mind. And they were not. Not even close.

One of the problems was that they had pre-decided on a very specific format, size, and dimension for these photos and it was just not within the realm of possibility for me to make cleaning photos work within those, mostly. It’s kind of hard to take a really nice, book-worthy photo of something in need of cleaning, really, and sometimes the way that I make my blog photos work is by changing the shape or angle of a photo. Or I just use the ugly photo anyway but it works because it still provides you with the info you need. But that won’t work for a book of course!

And then the other problem was that I’m not a mind reader. 🙂

There were a few photos that I thought actually turned out really nicely and would be really fun additions to the book, but the publishers really didn’t think they showed what needed to be shown for those particular parts of the book. I still maintain that those were perfect photos for the book because I’m just a fun person like that, and it really is kind of a fun book, but that’s just water under the bridge now!

SO. I let them know that those dimensions and particularly restrictive plans for the photos just weren’t going to make sense, and that I wasn’t happy with the photos either, so then I spent an entire weekend re-shooting a huuuuge amount of new photos to show them exactly what I thought would really work nicely and to show them what they were missing out on by not letting me just shoot the whole book with my own vision. And they turned out great! And I was really happy with them!

…And then they told me that ultimately they decided to leave the photos out of the book.

The funny thing is that I had already decided that I was totally fine with the whole no-photos-in-my-book thing before we even started on this whole photo-taking adventure, so I guess that kind of worked out? Sort of ? 🙂

I do wish that we had been able to reach some clarity on this subject and I hadn’t spent a month of my life taking these photos and stressing out, but the good news is that I still have all those “cutting room floor” photos and I’ll be able to share them in an upcoming post! Plus it makes a good story.

And, don’t worry, it’s a story with a happy ending.

I just got a preview of the new updated cover and a few sample pages of what the inside of the book will look like and they’re amazing! They’re fun! They’re easy-to-read! They let the content shine through clearly! They’re super functional and cute! So basically, the design team really knows what they’re doing and we probably should have just left them to it in the first place. 🙂

The most important thing to me is that this book will be a great, easy resource for anyone wanting to up their cleaning game a little, or who needs a little encouragement to dig their way out of a house that feels like it needs way too much of a time commitment to be cleaned properly, and I think we’re definitely on the right track for that.

I hope you’re finding these little book-writing stories interesting and informative so far! I think I’ll go back in time a little next time I share some of my book-writing adventures with you and talk a little about the actual writing of the book. Stay tuned for that!

In case you missed them!