Try this simple sheet pan cauliflower and potatoes recipe the next time you need a simple and delicious plant-based meal! Great as a side dish too for non-plant-based friends and family!

There’s something a bit luxurious about using all fresh ingredients in a meal when you’ve been focussing on mostly pantry staple meals or things out of the freezer, isn’t there? Of course we’ve been trying to limit our trips to the grocery store and we really don’t go inside at all. We’ve been placing an online order once every week or two and doing the parking lot pick-up thing, which has worked well. Our local stores have mostly had what we needed, but I’ve mostly made my meal time game plans based on simple pantry ingredients just in case some things became hard to find. I just didn’t want to deal with having a whole meal plan that I couldn’t make because of ingredient shortages. Well, that hasn’t happened, so I decided to try making a plant-based version of a sheet pan recipe that I’d found recently. A neat thing that I discovered last year was that you can pretty successfully replace chicken with cauliflower in just about any recipe you come across. So I decided to try it again in this lemon, garlic, and rosemary sheet pan cauliflower and potatoes recipe. 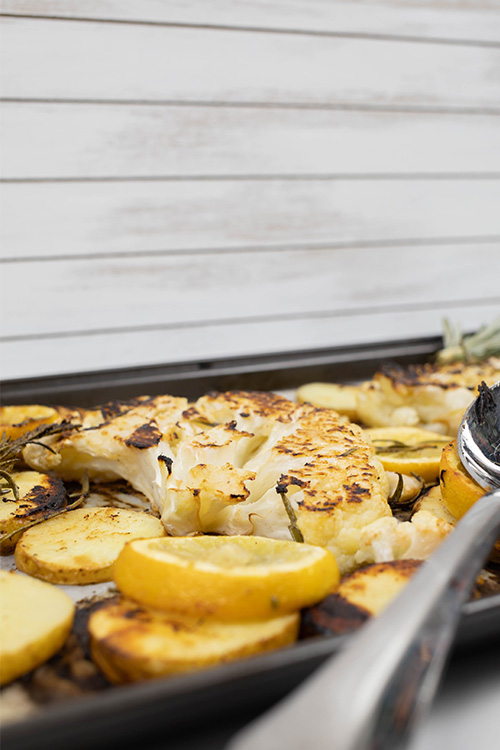 Ingredients Needed for The Sheet Pan Cauliflower and Potatoes

The only thing my grocery store didn’t have available this week was fresh garlic and what I had left was pretty old, so I just used garlic powder.

So simple. So good.

How to Make the Sheet Pan Cauliflower and Potatoes

The neat thing about making plant-based versions of regular recipes is that the method for making the meal is often so much easier than in the original recipe. You really can completely skip the pre-browning that would be required with chicken and just stick everything straight on the sheet pan.

Well, actually, you can see that the cauliflower and potatoes were a nice golden color on mine, but the lemon juice that ran out onto the parchment and some of the little bits of rosemary got quite charred. This is the price you pay for those nice crispy edges though! Worth it. 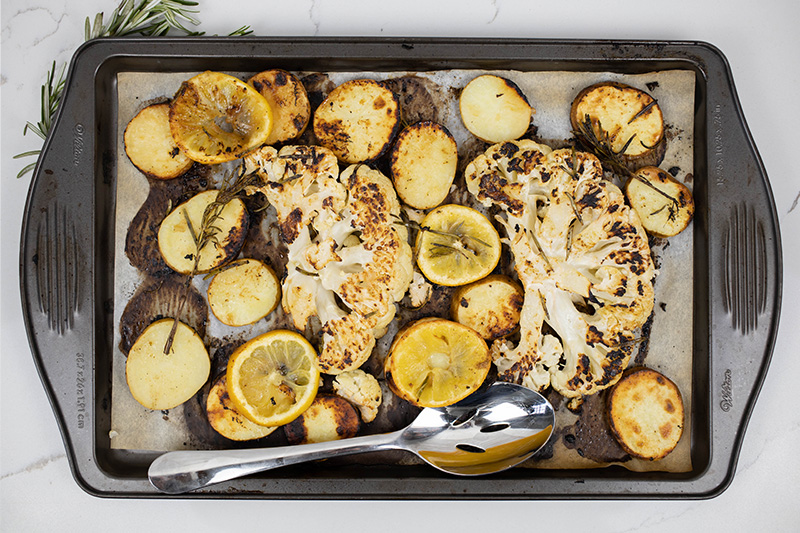 We love a good oven-baked cauliflower steak in this house and this recipe is just basically a fun variation on that. I don’t know how many people I’ve heard say that their husband’s favourite plant-based meal is a cauliflower steak and Chris definitely loves them too. If you’re trying to move your family towards eating more plant-based meals, definitely give this one a try.

He even took a picture of his plate once we got everything served up. I don’t think he’s ever done that before. Ever. 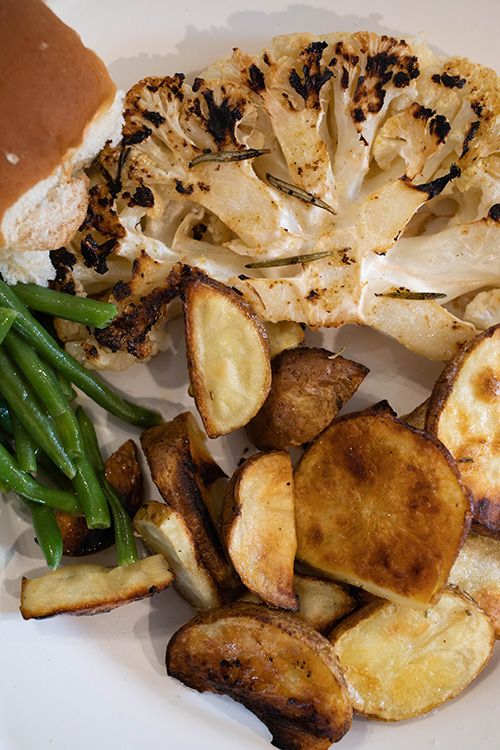 Try this simple sheet pan cauliflower and potatoes recipe the next time you need a simple and delicious plant-based meal! Great as a side dish too for non-plant-based friends and family!