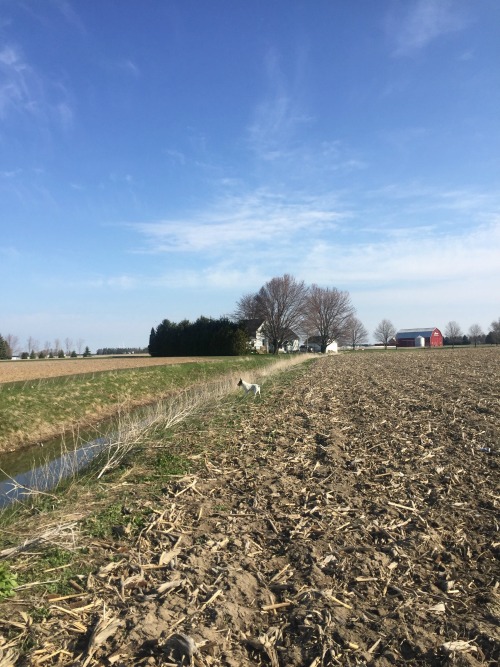 I decided to change the name of my weekly check-ins to “wins for the week” because it’s just more positive and this was the week I needed all the positivity I could get! 🙂 I don’t know what it was, but I had kind of a vague feeling of hopelessness come over me early in the week that I just couldn’t shake. I just couldn’t seem to stop myself from focussing on all the things that I couldn’t do, rather than focussing on the positive. I’m so well aware that, in fact, we’re actually “safe at home” and not “stuck at home” when so many brave people are going out into the world everyday and facing terrible things and then having to live with the fear of bringing that home to their families. There’s a bit of a sense of loss that we’re all dealing with right now I think, as we get closer to summer and realize that all the fun things we had planned probably won’t be happening. I’ve always loved the process of building a life, little by little, and I’ve had this vague sense of not being able to move in the direction of my goals lately, or at least my goals exactly as they were. Are you feeling like your brain can’t quite adjust to the new reality and what that means for your future plans? What’s worked for you? I need all the help I can get! Ha!

So here are some wins that came out of this week for me! 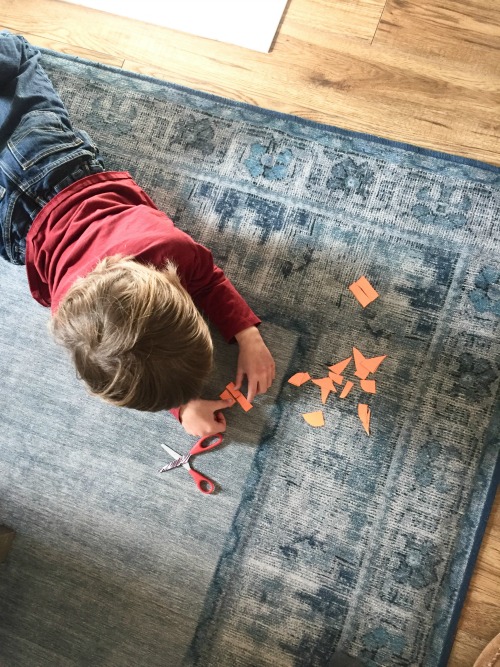 I’ve honestly been so annoyed at this whole home school situation. OK, I’ve been flat-out angry about it, I have to admit. The disorganization of it all, the fact that it kind of gets in the way of us being able to focus on work-related tasks, which is we still need to do, all of it. Our area just began mandatory, teacher-led school a few weeks ago and it’s really starting to be a struggle, at least for Jack who’s in grade one. He really thrives in the classroom environment and I think he’s been experiencing a bit of hopelessness too. It’s like every morning we wake up to a big list of tasks from his teacher and none of them are things he wants to do. Every day is the same and it just goes on and on without an end in sight. This week, we got into a situation where the teacher had increased our workload quite a bit and the number of assignments that needed to be handed in, and simultaneously, Jack just had enough of it. Basically he just started saying “Nope.  Not going to do that.” And of course, I’ve been trying to get work done as usual while also managing this schooling. So I would schedule in little 15 minute blocks for school throughout the day, which would have worked fine if we hopped right to it. Unfortunately, that 15 minutes was taken up by fighting and then we’d be behind schedule, with nothing to show for it. Anyway, it was bad.

We ended up kind of just completely re-setting the whole process and starting again with homeschooling in a completely different way and with a different schedule for it and different goals. It’s not perfect, but we’re getting things done without yelling or tears. I’m feeling pretty hopeful about the whole situation now, rather than angry and that’s a great thing. I’ll share a little more about that whole process soon, I think, since I know a lot of parents are in the very same situation right now. 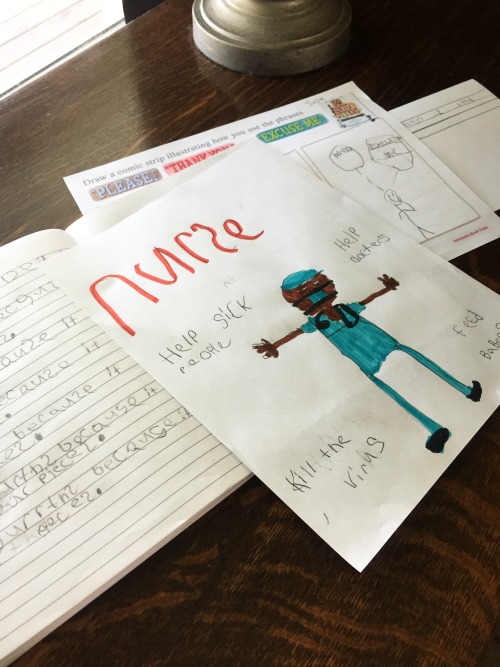 The Base Cabinets Are In!

We made a really fun little bit of progress with the fireplace/built-in project! We installed the base cabinets for the shelves this week and even put on the pretty glass-front doors. I, of course, moved my things in right away. I always say that you know you’ve done a good job designing your project when you just automatically start using it immediately after completion. Like the front porch that everyone is suddenly always out on, or these cabinets that were suddenly full. It’s very clear that we still need a lot more storage in this house. I moved our photo albums, some boxes of old DVDs that we still watch occasionally and our laptop stuff into the cabinet and it’s been so nice to have a real place for all those things to live. We included an outlet right inside the cabinet for charging our laptops and it’s just the perfect place for them. Obviously all the grey parts need to be painted and the stuff inside won’t stay exactly like this. But it was fun to have a little extra storage all of a sudden. 🙂 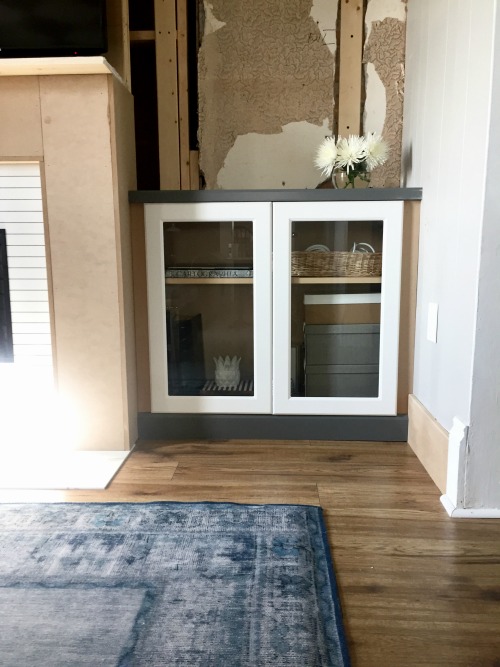 Just snapped this on my phone this morning to share it with you. Lighting is terrible, obviously. Real photos coming soon! 🙂

I mentioned above that I’ve been feeling like all of our summer plans are being pulled right out from underneath us. We had a pretty quiet summer last year while we were working on the porch and I kind of regretted it in the end because I felt like we’d done basically nothing and summer had just passed us by. We started making plans right away to make this summer a little more exciting: Camping, a trip out to Northern BC (which the kids both LOVE) to see my grandma, a big school trip to NYC for Kennedy, lots of paddle boarding and kayaking. All the things. Well of course all those things are cancelled. At first, I started by making a list of all the people I wanted to see and things I wanted to do once we’re able to again. That was fun, but I ended up feeling frustrated because I can’t say exactly when any of those things will be able to happen. So I made a new list. A list of fun things for us to do, things that I would love to do anyway, but things that are completely social-distancing friendly. Things to look forward to that we can actually do. Kind of a social distancing summer bucket list, if you will.  And it helped. 🙂 It was a win.

There are so many times that I feel so silly for getting so wrapped up in my own little world when there are so many people doing big things to try to keep us all safe and healthy and get life back to normal for everyone. My problems/frustrations are so small, and I know this. I also really think that it’s extra important right now for each of us to focus on ourselves, how we’re feeling, and what we can control to keep ourselves feeling settled and comfortable so we can just stay put. It’s easy to get restless right now, and you can see from the news that some people are getting themselves so worked up that they’re lashing out, rebelling, and putting themselves and their loved ones at risk because they just can’t handle this waiting game any longer. So even if it seems silly to spend so much time making sure you’re doing OK and feeling relatively happy when there are so many bigger things happening in the world, it’s important.

By the way, those creek bank daffodils I showed you the other week are almost in bloom! 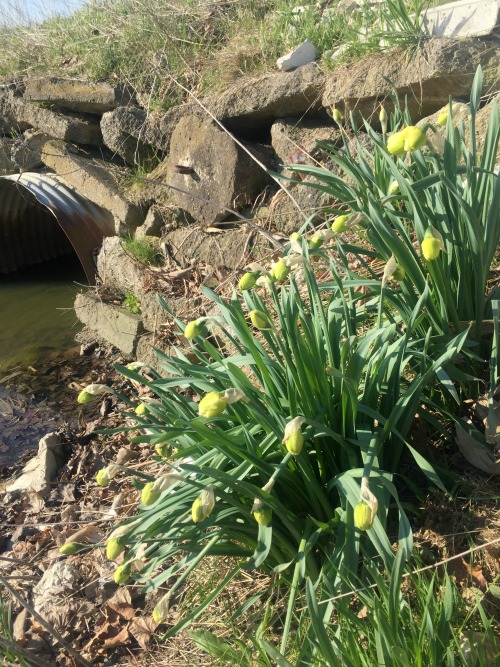 Hope you had a great week and it was a little less tumultuous/frustrating than mine was! Good things will be on the way if my new list of summer fun has anything to do with it! It will just need to stop snowing here first. 🙂