I think we’re kind of, sort of starting to find a good daily routine for this new way of life that allows us to get some things done and also not lose our minds. I thought it might be helpful to share, so here’s what our daily routine during social distancing looks like! 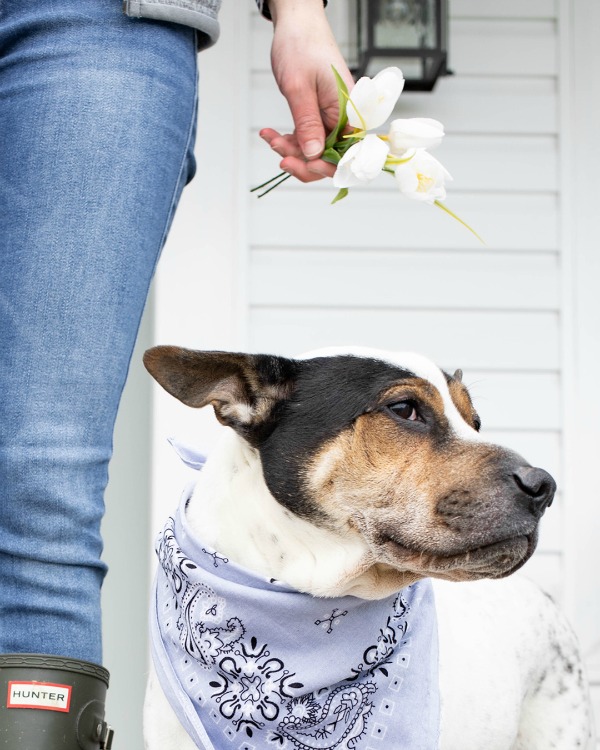 I’d mentioned last week how it seems like we’re kind of moving in slow motion around here and not getting as much done each day as it seems like we should be able to, now that we don’t have anywhere to go, but despite that fact we’re still having quite a few “wins” around here. After this week, I do still feel like we’re not as productive as I’d like us to be, but I feel like we’re settling into our own little (slow-paced) routine and I think it’s working for us. We’re still able to squeeze a little bit of productivity out of the day, we’ve incorporated some homeschooling activities successfully-ish, and we’re even managing to enjoy ourselves at least a little bit everyday. So I’d say those are signs of a decent routine.

Despite my best efforts, none of us are getting up quite as early as we were in the “before times”, but we’re slowly working our way back into normalcy there, I think. When all this first started, we would be pretty wound up at night and would stay up a little too late reading the news, so that will inevitably lead to sleeping in when you don’t have anywhere to be the next day. I still make a point of getting up and getting dressed right away and it makes me feel better and just starts the day on the right note. The first hour or two of the morning involves getting breakfast for the kids and myself (Chris likes to eat a little later), folding the load of laundry that I ran the night before, doing a few minutes of work (responding to comments, scheduling pins, stuff like that), then I try to get out of the house for a little walk around the property with Jack and Chuckers for a little fresh air by 9 am ish at the latest. 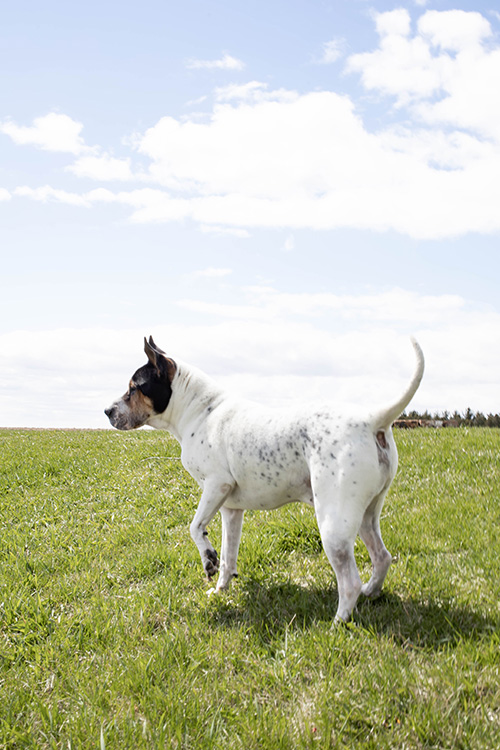 We’re really lucky because Kennedy is in high school and has great time management skills. She’s also been using things like google classroom for years already, so the transition to online schooling has been pretty easy for her. She does her school work when she feels like it, usually from late morning to the early afternoon, but she gets is all done on her own and we don’t have to nag her about it at all. She’s even set up a little homeschool nook for herself in our back hall mudroom off our bedroom. Her desk in her room is dedicate to drawing and painting so I thought this was a pretty clever little spot. 🙂 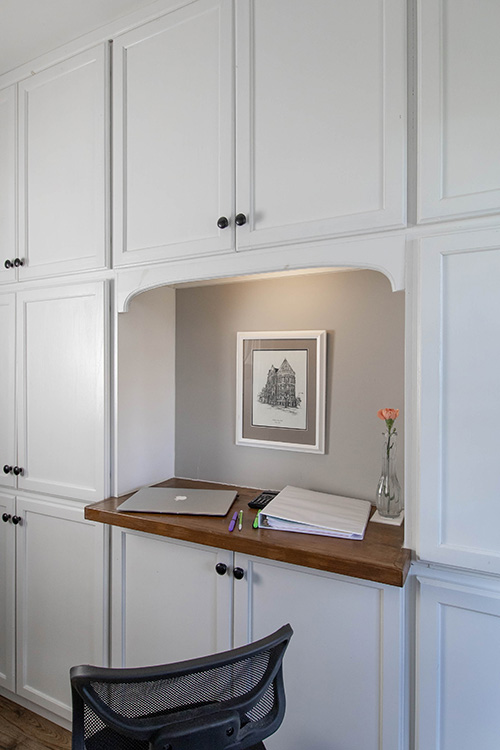 Jack has quite a bit less work to do because he’s just in the first grade, but doing all his work all at once is still a bit too much for him outside of the classroom environment. He does really well with other kids around and he just kind of gets bored at home alone I think. I find doing one activity right when we get in from our morning walk works really well because we’re both usually refreshed and energized. Then, we come back to it after dinner and do another activity then, usually after another good dose of fresh air.

If I’m being honest, we usually end up getting into the work that we meant to do in the morning during the afternoons. Better late than never! Blog posts are still managing to get written and photos are being taken even if we are moving a little more slowly. This whole scenario is actually a bit of a blessing in disguise though because I think this is the time of day where we might be prone to start checking in with the news if we had a bit of down time. Having something that we definitely need to focus on immediately during that time is kind of a good thing. The news is obviously not great right now and I’ve also found that, unlike the last couple of weeks, there isn’t really much new information on there that we need to be aware of immediately. It’s just like “Yup, world is still shut down. You should still stay home. Got it.”

Evenings have actually been a lot of fun! If the weather is reasonable, this is usually the time when Chris likes to make a bit of progress on our fireplace project, which I’m hoping to update you on in the coming week. I also try to do a little more “school time” with Jack. We also just seem to find ourselves naturally doing enjoyable things like spending time on the porch, or watching the birds that I’ve become obsessed with feeding on our front walkway. It’s just another step in my early transition to eccentric granny. I can’t help myself. It’s my natural tendency in life.

This is my pile of birdseed that I try to replenish every day or two. 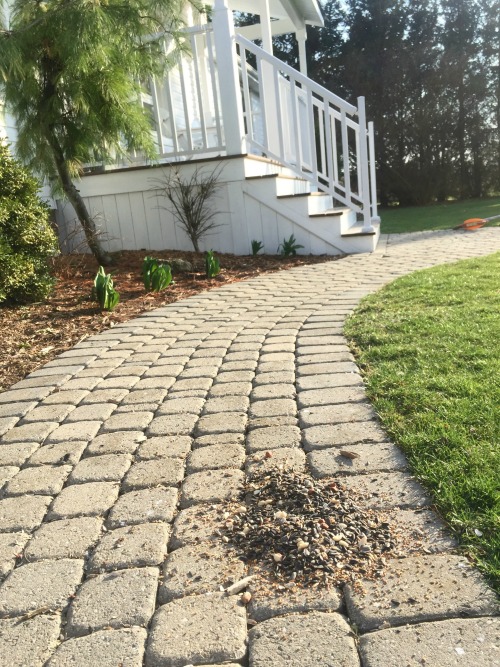 Some highlights from this week have been playing cards with the kids (Kennedy and I taught Jack how to play Uno and I’m pretty delighted that he’s loving it) and taking a family bike ride into our little village down the street, which for some reason we never do. We have a random patch of daffodils growing in one spot along our creek and I was pretty interested to see that there are patches growing here and there all along the creek between our place and the village, which I’ve just never noticed before as I zoomed by in the car. I had this little thought that it would be neat if I could start a movement where everyone who lives along that mile-long stretch of the creek would buy a bag of daffodil bulbs each fall and plant them along the creek banks. It would make for something pretty spectacular after a few years. I may have to see if I can get that going. 🙂 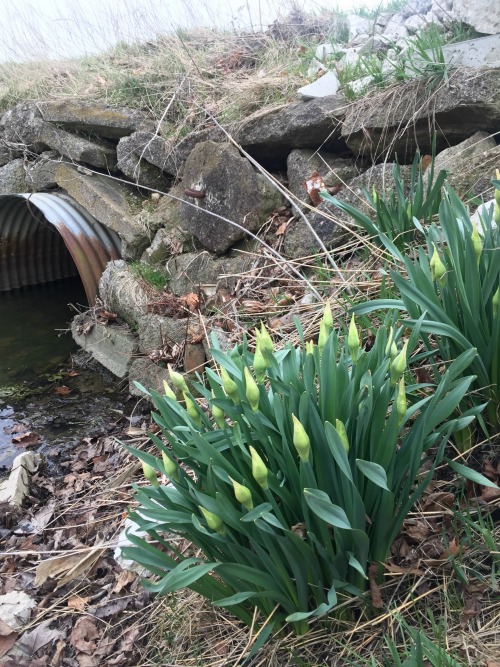 We’ve had some beautiful days this week as well and I’m happy to report that we’ve been making good use of our porch already. I’m really looking forward to refining my porch-sitting skills as the season progresses. I think I still have much to learn. 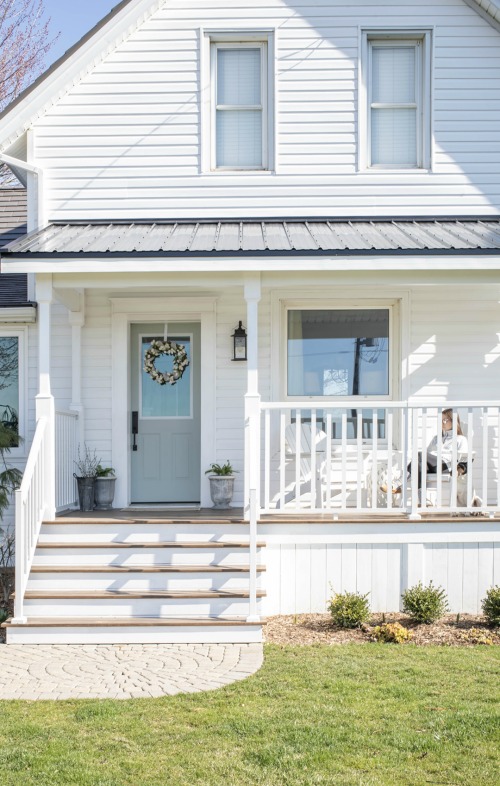 So that’s what our days look like! I feel like this explanation was a little disjointed, which is perfect because our routine still feels a little that way. I can see it falling into place though and I think we’re starting to get it figured out, which is encouraging.

How has your week been? Are you starting to see a new routine forming or do you still have that “Who am I? Where am I? What day is it?” feeling going on?

PAST “CHECKING IN” POSTS