Suspended ceilings can be really practical, but they can seem like eyesores in certain rooms of your home. Here’s how to update a suspended ceiling and turn it into a beautiful feature in any room!

We’ve been more than a little annoyed with the suspended ceilings in our living and dining rooms since we moved into our house. These are rooms that you usually want to make extra comfortable and beautiful. Something as utilitarian as a basic suspended ceiling just doesn’t seem to fit in. It seems like installing suspended ceilings in 100+ year old homes like ours was really popular at one point a few years ago and we’re thinking maybe it was maybe for heating reasons, because it’s easier to heat a room with 8 ft ceilings than one with ceilings that are 10ft or higher. We’re not completely sure though! One thing we are sure of is that we didn’t love the idea of having ceilings that look like they belong in a 1980’s basement. If you have a similar situation in your home, here’s how to update a suspended ceiling!

How to Easily Update a Suspended Ceiling

I’m so excited to share this transformation with you today. I partnered up with Decorative Ceiling Tiles earlier this spring to update our suspended ceiling and we really couldn’t be more thrilled with how easily and almost instantly this new ceiling made our living room and dining room feel so much better. No more basement vibes in here!

If you’ve been following along with me on Instagram, then this is old news to you, because I’ve just been talking about this project so much over there, but I’m so happy to be able to finally put it all together with full before-and-after photos. You know I love a good before and after! 🙂

If you’re not following along with me on Instagram, why in the world not?! 🙂 I especially love Instagram Stories because that’s where I’m able to easily share all our projects as we’re working on them, little snippets of daily life, and my favourite tips and tricks right when I think to share them. I’m @creeklinehouse. 🙂

So let’s start out with how this ceiling used to look. Here’s the “before”. 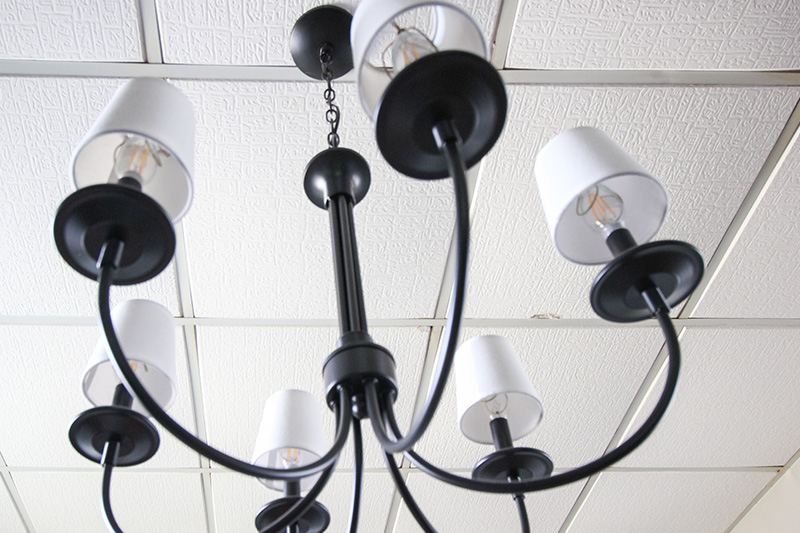 And here’ s how the ceiling looks now! 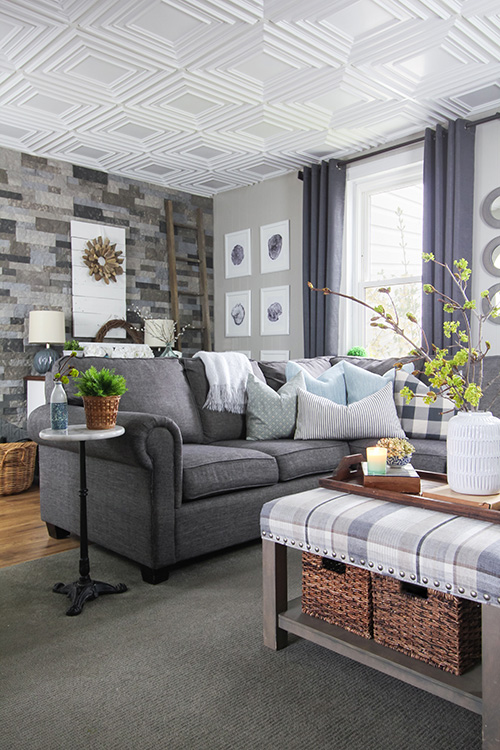 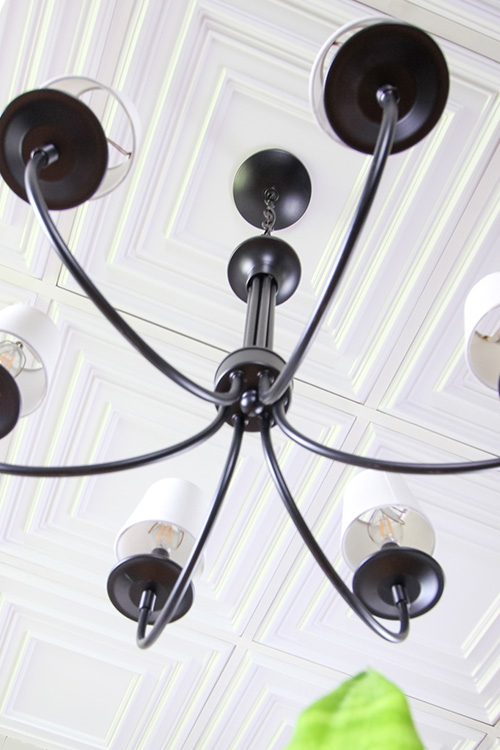 Would you believe that this is still a suspended ceiling? It looks like a beautiful, artfully tiled ceiling now, doesn’t it? The trick is just to find the right tile. I had no idea that beautiful tiles for suspended ceilings even existed before I discovered Decorative Ceiling Tiles, but they just make all the difference. 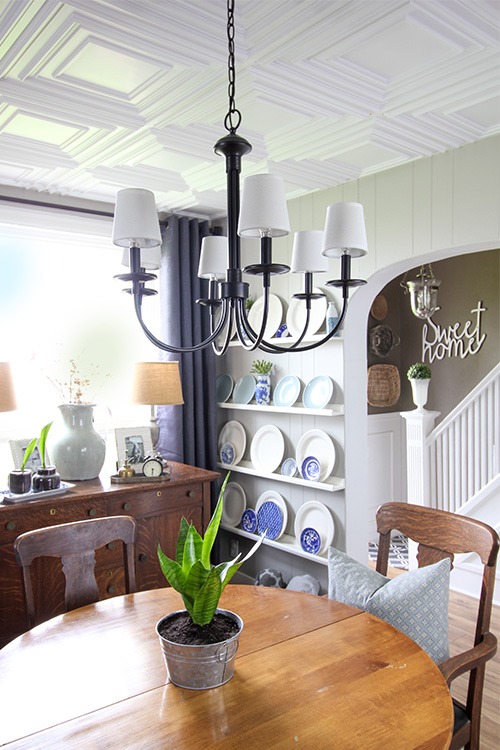 How to Update a Suspended Ceiling: The Process

In order to update a suspended ceiling, all you really need to do is select a style of tile that fits your home decor, pop the old tiles out, and replace them with new tiles!

We actually painted our suspended ceiling grid as well, since the metal bars were grey before and we wanted them to be white to match the new tiles. Once that was done, we just dropped the new tiles back in place of the old ones!

This is definitely instant-gratification at its finest. 🙂 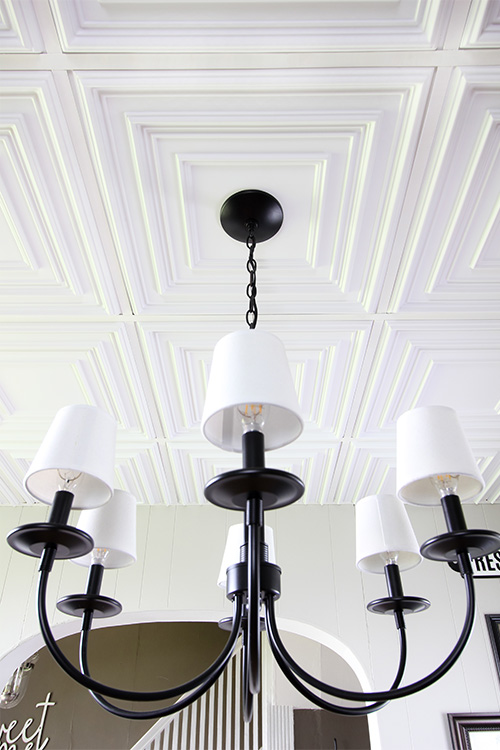 These tiles are made of a lightweight PVC and are super easy to work with. We actually had to cut a few to fit along a few walls where the space in the grid wasn’t a full square. We were able to do this really easily and precisely using an oscillating multitool, but you couldn’t honestly probably cut them with a utility knife or even scissors.

Once the ceiling tiles are in place, you would never know that they aren’t real tin tiles.

This style of tile that we used is called “Schoolhouse”, but you can find ceiling tiles in just about every style and color that you could imagine on DecorativeCeilingTiles.Net. 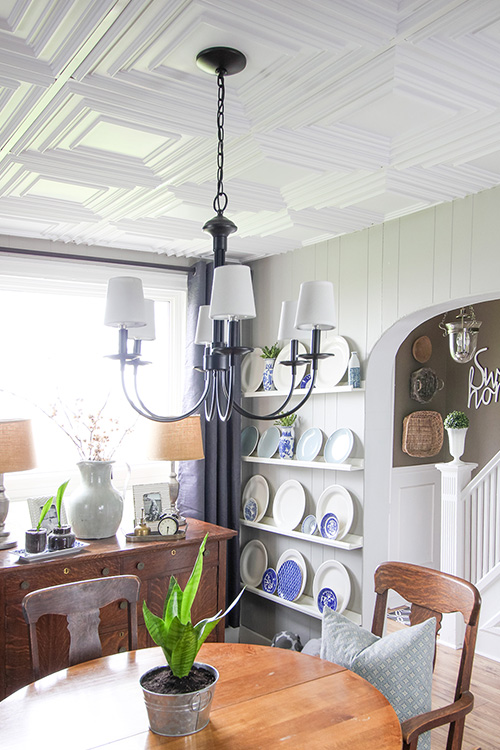 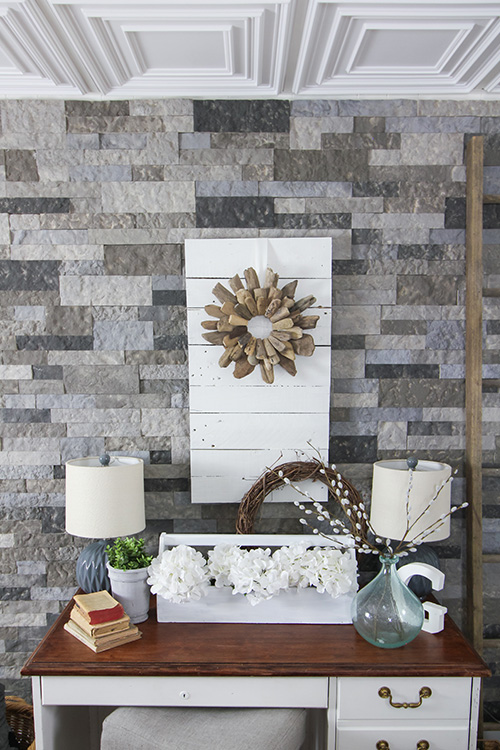 If you have ugly suspended ceilings and you aren’t sure what to do about them, this is definitely a great, simple solution!

Did you know these fancy drop-in ceiling tiles existed? Do you need to update a suspended ceiling in your home?

Thank you so much to Decorative Ceiling Tiles for providing the ceiling tiles for this project!