Old galvanized metal can be so beautiful and so full of character. There are many ways to quickly “age” shiny new galvanized metal, but a lot of them use scary harsh chemicals so they didn’t appeal to me so much. Read on to see how I age galvanized metal containers quickly using just basic household ingredients!

I’ve been really inspired to try to age galvanized metal containers lately so I can use them outside later in the season. My nearest dollar store carries really shiny galvanized buckets and bins of all shapes and sizes and I’ve been walking past them for a few years now feeling like there must be something that I could do with them. I finally picked a few up the other day and decided to start my experiment in aging galvanized metal!

How Not to Age Galvanized Metal

Well, it turns out that there are a lot of ways to do this. Some of them really fast, some of them a little less. Almost all of the methods that I came across used scary harsh chemicals though, which you know I’m pretty freaked out by. Some of the methods listed actually used some normal, seemingly harmless ingredients, but upon closer inspection it turned out that the instructions were to mix the two chemicals together in a way that I knew was a big no-no. For example, one method suggested mixing vinegar and bleach together. Mixing these two things together causes toxic chlorine gas so definitely avoid that method, even if you’re working outside.

Another method suggested mixing vinegar and hydrogen peroxide. Mixing these together creates peracetic acid which, again, you don’t want to do. I used a safer variation on this method which turned out be super effective, but not so scary.

How I Age Galvanized Metal Containers

The method that I used was really effective and pretty fast although it did take a few hours rather than a few minutes. It really didn’t involve any extra effort on my part though and I definitely didn’t mind waiting for the results that I got!

This method really couldn’t be any easier. It actually seems like a lot less hassle to me than a lot of the other methods I saw.

I started out with some very shiny metal buckets. 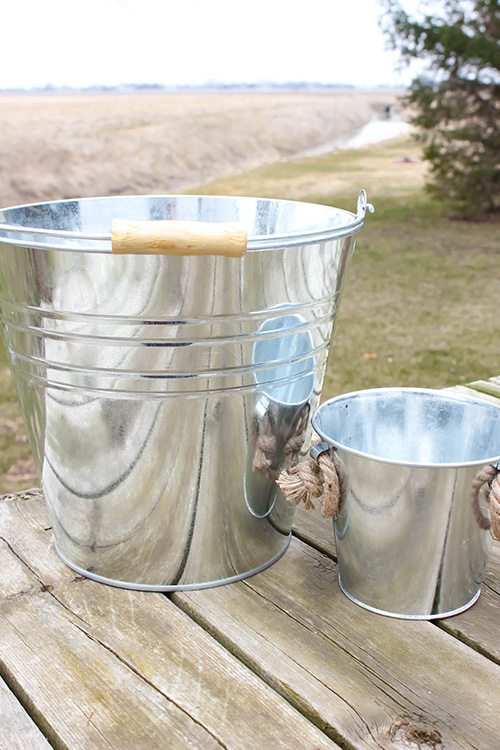 I put about 1/4 cup of table salt in the bottom of my plastic container and then filled it up with my vinegar.

Next I took my steel wool and quickly roughed up the shiny finish on my containers, then I placed them in the tub with the vinegar. 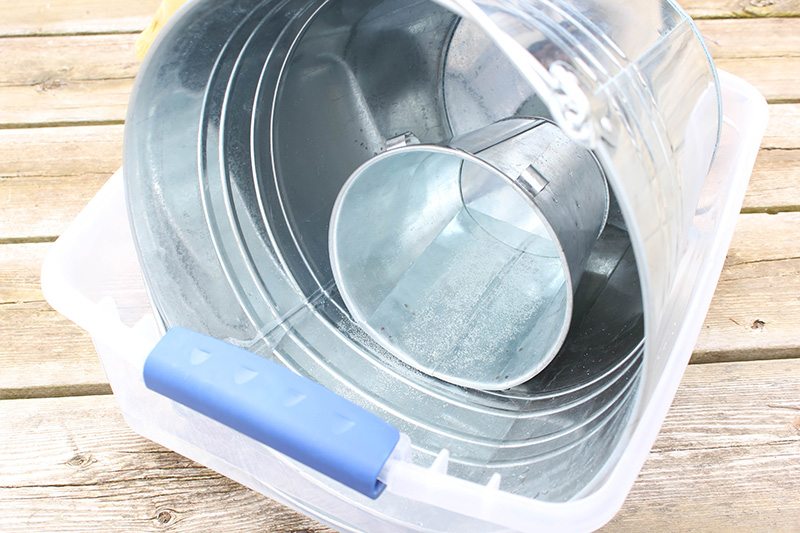 Don’t worry if your metal containers are really large and they aren’t fully submerged. You can easily work in sections.

I left my containers to sit in the vinegar for about an hour then I turned them a little bit to submerge the next section. I kept going outside each hour-ish to turn my containers until I had made it all the way around.

If you want a really super rusty rustic finish on your metal, just leave each section submerged for awhile longer. 8 hours should give you a whole lot of rust. 1 hour will give you more of the finish that you see on my little bucket here. 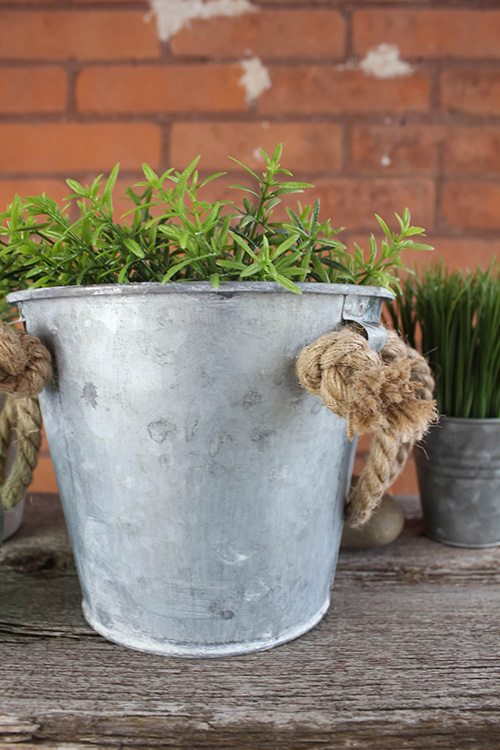 How to Age Galvanized Metal Containers a Little Bit More

After the vinegar bath, my containers were pretty well aged, but I felt like I wanted to see if I could take things just a bit further. There were still some spots that seemed a bit shiny and a little too new looking for my liking. So I rinsed my containers thoroughly to remove all of the vinegar then dried them really well.

Next I put about 2 tablespoons of salt in a little plastic container along with about 1/4 cup of the hydrogen peroxide. I dipped a paper towel into the mixture and wiped by buckets down with it. Then I left them to sit outside for about half an hour. The hydrogen peroxide really sped up the oxidization process and gave me this really nice, mellow patina. I really like the white crustiness that formed around the edges as well. We have a galvanized metal bucket that is actually old and it looks really similar to this. 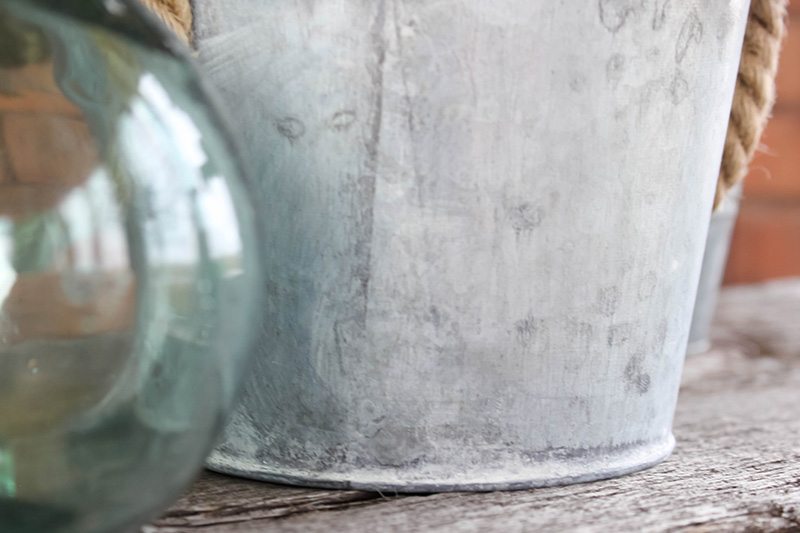 Keep in mind that even though we’re just using vinegar and hydrogen peroxide separately in this case and not mixing them together, we are still creating a chemical reaction when the protective outer coating on the metal is being eaten away. It’s important to do this project outside in a well-ventilated area. 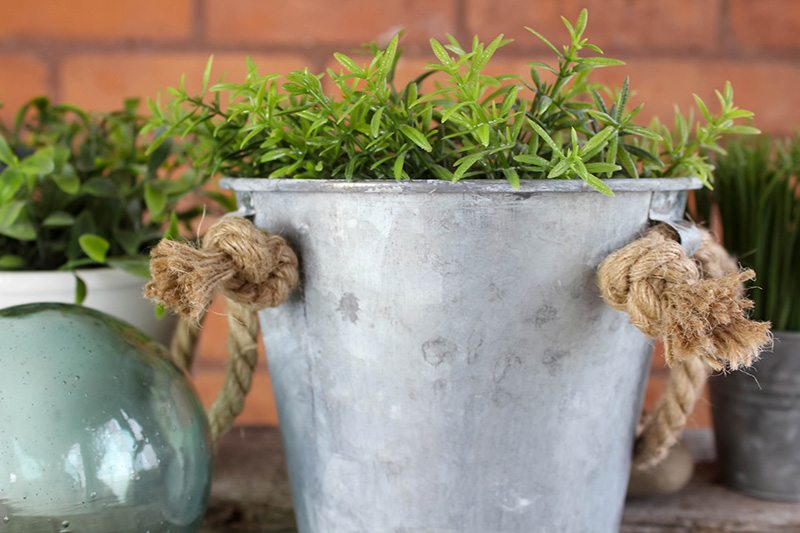 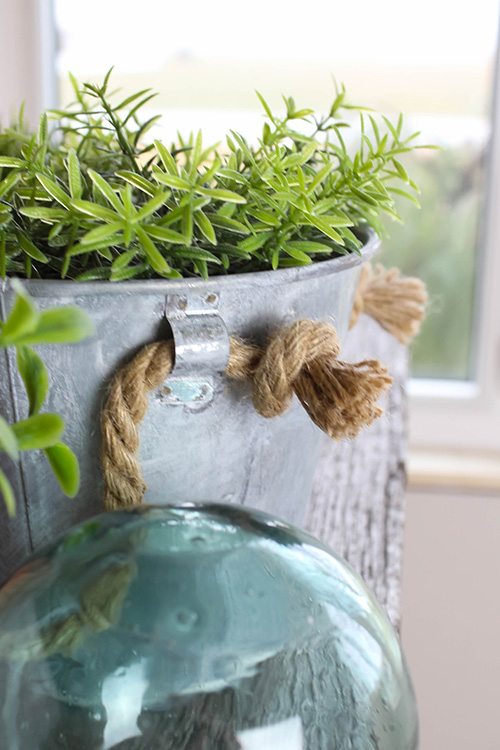 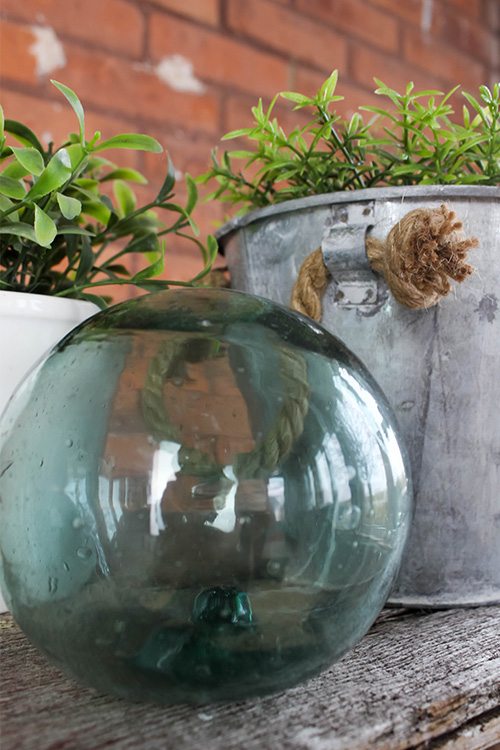 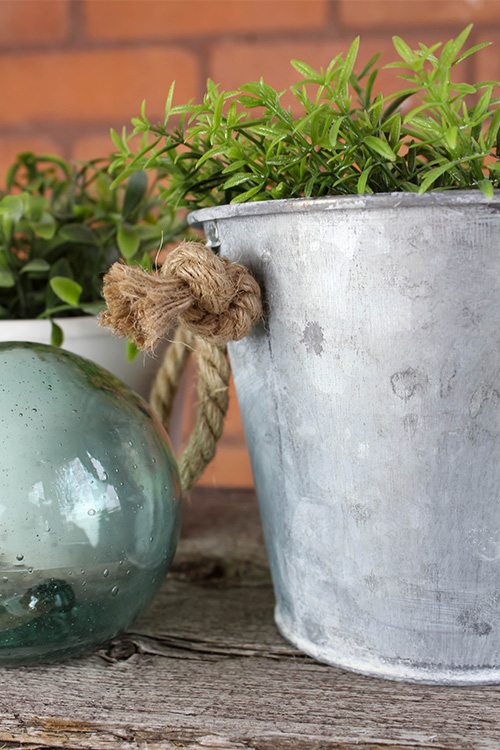 I’m so thrilled with how well this experiment to age galvanized metal worked out! I definitely have plans to do quite a few more of these for various uses this summer now that I know how easily it can be done!

I recently shared detailed, in-depth videos of this process on Instagram Stories, give me a follow for more real-life, fun projects!