Use this Crock pot veggie stock recipe as an easy way to make use of your leftover veggies scraps, to improve your soup game, and to make your kitchen smell amazing!

Some purists may say that this technically isn’t “stock”, because stock sometimes refers to something that has been boiled with bones in it, and veggies don’t have bones. So those people would actually call this “broth”. I’ve also heard in the stock-vs-broth debate that you use one to describe a boiled liquid that has been seasoned, and that the other is when it is unseasoned and just left plain. Either way, I just always call this “stock” when I’m working in the kitchen so that’s what we’re going to call it today. 🙂 Crock Pot veggie stock is a great way to use up your leftover veggie scraps before they finally make their way out to the compost and it makes all the things you cook with veggie stock just a little bit better.

To make your veggie stock, you’ll need two basic things: Veggies (or veggie scraps) and water. The types of veggies that you use can vary a bit each time, but some basic things that you might want to use are the following vegetables, either whole, or just bits and pieces of them leftover from other recipes:

Any combination of those would make you a great, basic veggie stock. As a general rule, stay away from cruciferous veggies like broccoli, cauliflower, and cabbage as these can usually create a really strong flavour that doesn’t work well in a basic, everyday veggie stock.

Some other ideas to try if you’re feeling creative:

You never know when you’ll discover the world’s best veggie stock recipe using something unusual! Just keep this one thing in mind: If you do find something amazing, please let me know! Ha! 🙂

If you’re doing a big meal-prep session, or you’re cooking a big holiday dinner, it’s a great idea to have your crock pot set up next to you on the counter so you can toss all of your veggie scraps in there as you go. When it’s all full, just add water and turn it on!

If you tend to cook smaller amounts at a time, don’t worry! Just grab yourself a reusable freezer-safe container and toss your veggie scraps in there each time you chop some veggies. Before you know it, you’ll have enough to make a big batch of Crock Pot veggie stock! 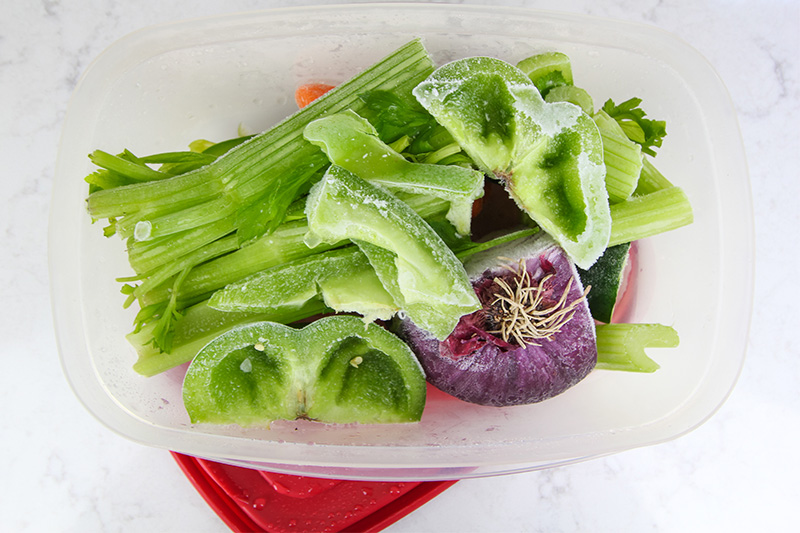 The general rule is that 1 pound of veggies should make about 4 cups of broth, so if you want to fill a big Crock Pot, you’ll probably want about 3 pounds of veggies to 12 cups of water. Like with anything though, you can definitely use your own judgement and play around with it a bit until it’s to your liking.

When you’re ready to make your veggie stock, toss in your veggies and fill your Crock Pot with water. It’s totally fine if your veggies have been stored in the freezer and are still frozen. Add in a few peppercorns and a couple of bay leaves, then put the lid on and cook on low for about 8-10 hours or on high for about 4 hours. 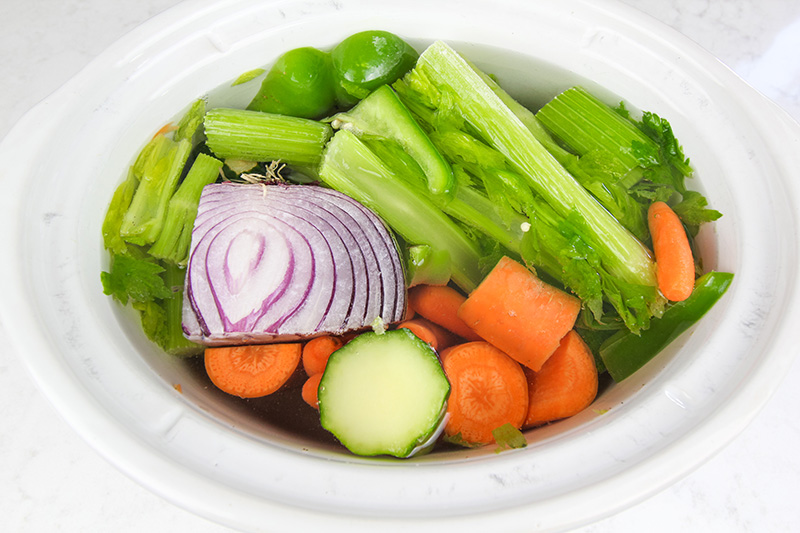 When you’re all done, turn your slow cooker off, remove the lid and allow the stock to cool for about 30 minutes or so before you work with it.

Since we’re working with such a large amount of liquid and veggies, here’s the method I find works well for removing the veggies from the broth:

I like to first use a slotted spoon to remove the biggest pieces of veggies, and I set them aside in a bowl to be added to the compost. Next, I get a big bowl and place a strainer on top, then I line the strainer with a few layers of cheese cloth to get the broth as clear as possible. I pour the broth out of the Crock Pot, through the strainer and into the big bowl below.

Season your veggie stock to taste at this point before you pack it up and store it away. 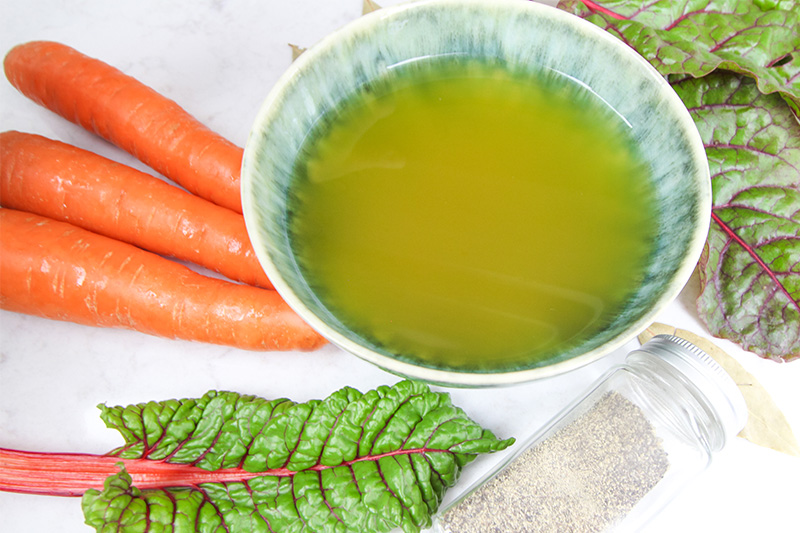 The broth can be stored in the fridge for a few days or frozen for about 3 months! Store it in 4 cup portions if you want to use it in your recipes in the same way that you use the tetra packs of broth from the store.

Do you make your own broth or stock at home? Have you ever tried using your slow cooker to do it?