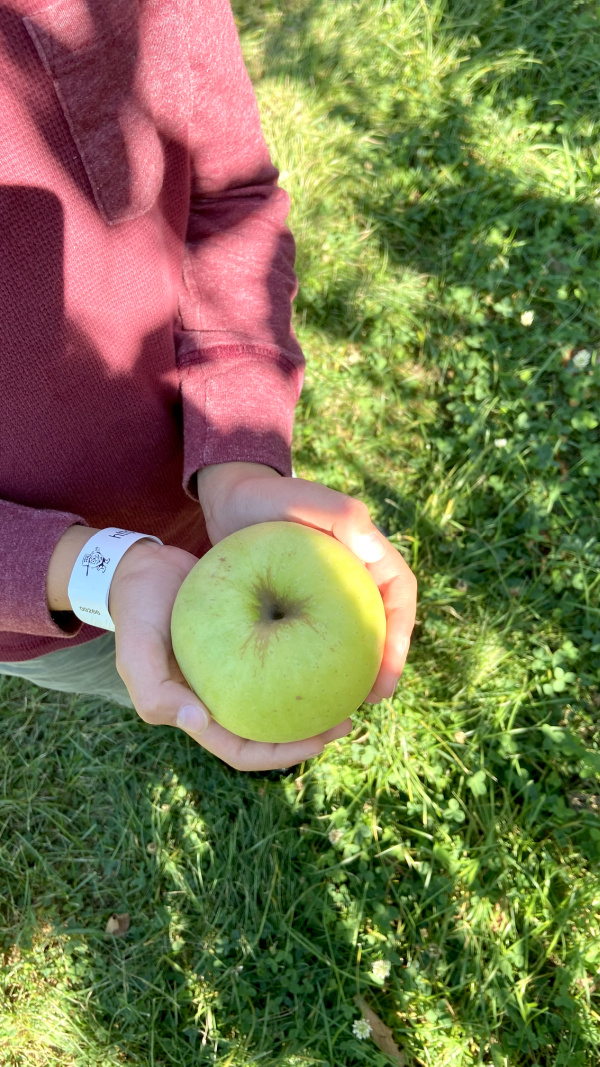 You may have noticed from my lack of frequent posting over the last couple of weeks that we’ve once again ended up just being way busier than I thought we were going to be. I’m hearing the same thing from a lot of parents right now. It seems like everyone felt like they’d have all kinds of extra time to get things done once the kids were back in school, but mostly everyone’s feeling like there just aren’t enough hours in the day! Isn’t that always the way it goes though? When will be ever learn? 🙂 Anyway, we still managed to squeeze in a bit of fun and a bit of productivity here and there. Here are five random tidbits that come to mind when I look back over the last two weeks.

We went apple picking! I wasn’t sure if we were actually going to make it this year, but we did it. Apple picking is such a big favourite fall activity for all of us and we’re always trying to find the exact right time to go. We don’t want to go too early because we don’t want it to be too hot, however I’ve figured out that my favourite McIntosh apples ripen really early in the season and if we go too late, then we miss them. So basically we can’t win. Or we’ll just have to go twice, once early in the season to actually get the apples, and once later on to enjoy the fun and atmosphere in the beautiful autumnal weather while wearing cozy sweaters. Ha! We usually try to go when the weather is a bit gloomy so the crowds aren’t too bad, but this year we went on a beautiful sunny day, and we still survived. 🙂 We picked the apples, saw the sunflowers, played in the big “fun acre” playground, ate the caramel apples on the drive home, and I made a big batch of homemade apple sauce for Kennedy, which is her favourite. We didn’t have anything like this nearby where I grew up, so I feel so lucky that we have all this classic fall fun so close to us here. 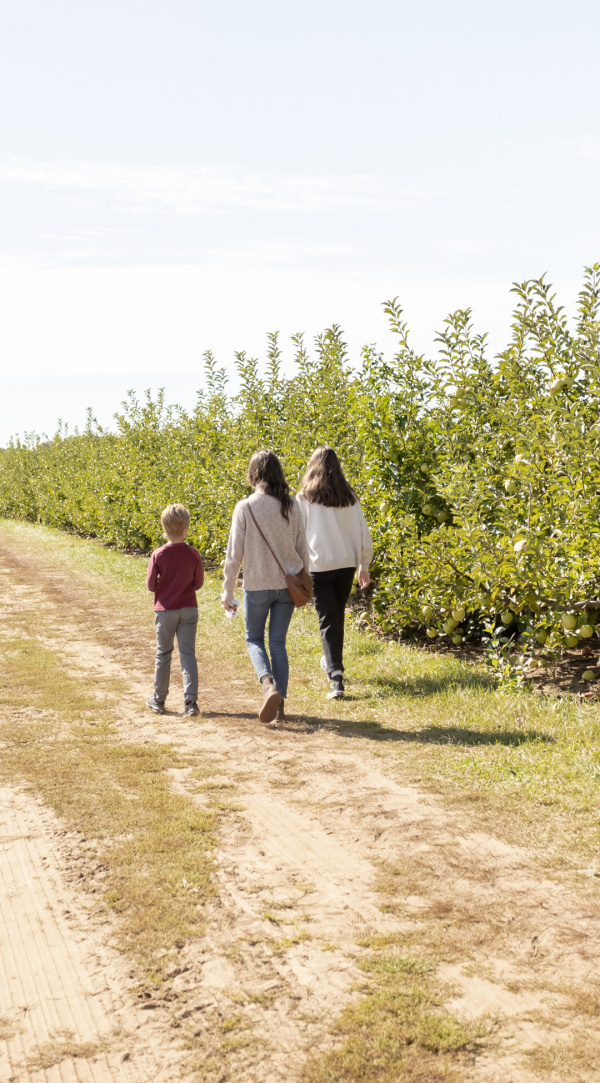 My freezer is full of baked goods already. Oops! I got a bit excited with this whole back to school season and getting back into a routine and I’ve been doing just a bit of baking a couple of times every weekend… and then maybe once during the week too, and then one more thing here and there. And every time I realize that I made just a little too much and there’s no way that we’ll be able to actually eat everything so I end up putting half the batch of cookies, or one of the two loaves in the freezer downstairs and now I realize that I’m (sadly) going to have to lay off of the baking for a couple of weeks or we’ll never get a chance to eat all of this stuff and I won’t have room when I start my Christmas baking. We’ll see how that goes because I just love filling the house with the smells of something delicious from the oven on a Sunday morning. I’ve gotten in the habit of setting up all of the ingredients for whatever I want to make that weekend on Friday night and then it’s just so fun and easy to whip something up whenever I feel like it during the weekend. 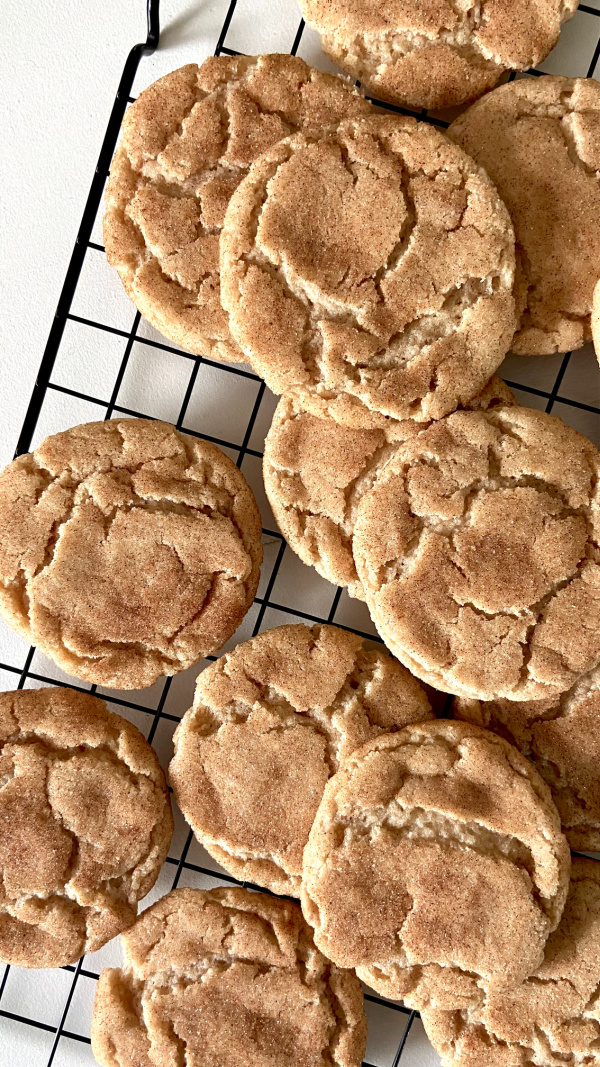 I’ve been trying to work towards having our house in a state that’s “always ready for company”. I always get in the mood for getting really organized with my routines in the fall, as a lot of people do, so this mindset has really been helping me focus and feel like I’m getting decent results with the few minutes that I have to try to keep things clean and tidy here and there. I start out by focussing on the areas that someone would see first when they walk into our house if they were to pop over unannounced, and then I work my way back from there to the less “public” parts of the house. So I start by making sure the mudroom is presentable, then I move into the kitchen, then the living room. Although the mudroom is of course our dumping ground, I find that taking 30 seconds to get things in order in there a couple of times a day means that it still never really gets out of hand and always looks presentable enough that I would never be worried about someone seeing it. I’m so glad I did my little mudroom update last year, because I find having the console table and the pretty washable rug really make the room so much more welcoming automatically, even if things do get a bit messy and lived-in. 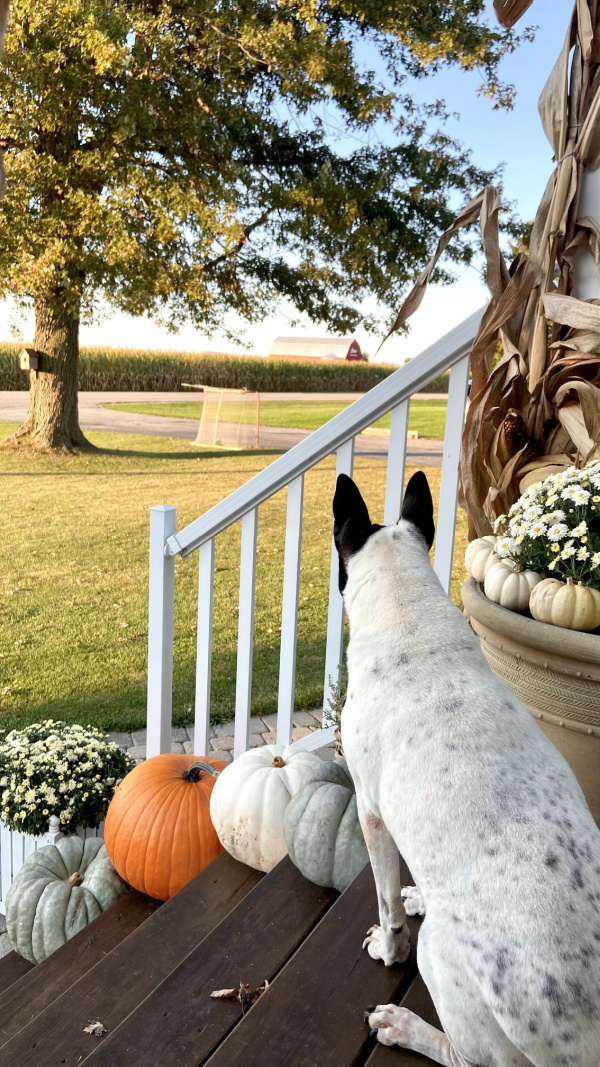 I switched my closet over to fall and it kind of goes against everything I’ve always said. I’ve often suggested that if you find that you have enough clothing to fill your closet twice, and you find you need to empty your closet out at the end of the warm season and the end of the cold season to make room for the opposite season’s wardrobe, you probably own way too many clothes. You only have one body after all, and there are only so many days and so many clothing items that are actually useful to you during most of these days. Well, this spring, I found myself feeling like I was wading through a sea of sweaters in my closet to get to the few things that I would actually use during the summer months, so I put all of my cold weather stuff away in a big bin downstairs and I actually enjoyed having a less full closet and more space to move around. Last week I went and pulled out the bin of cold weather stuff and I have to admit that it was fun. There were definitely some things that I’d forgotten about and it was kind of like getting a whole new wardrobe. I still think that you shouldn’t own more clothes than can comfortably fit in your closet, even if it’s one of those small, single-bar closets like I have, but maybe it’s even better if you only have half of your clothes in there at a time and just enjoy all that extra space and a brand-new wardrobe every six months. I might change my mind again in six months and decide that it’s a big waste of time to switch everything around, but just maybe I’ll keep this fun new habit up.

We finished our bedroom mini update! If you remember, I mentioned a few weeks ago that I decided to start a new “mini project” on one little section of our bedroom and it has come together so nicely. Of course, the rest of the room is still pretty unfinished, with bare drywall and exposed brick from the exterior of the original house still waiting for some cabinetry to go in front of it, but it’s nice to have the space refreshed where we actually sleep. Jack is pretty excited about it and thinks it looks like we have a hotel bed now. He said he wants to re-do his room too and change the theme from Star Wars to “Hotel”. 🙂 Anyway, I’ll go over the update in a bit more detail soon, but we ended up using the same white velvet curtains that we used in the living room and they didn’t let me down. I also found this super inexpensive quilt set on Amazon that ended up being so beautiful and comfortable in person, and these gingham sheets that look so great with it. I’ve seen that soft beige and cream gingham quite a few places in different fall fashion applications so I was pretty excited about those being both so on-trend and also just so classic. I’ve discovered that I absolutely can’t do fancy, expensive bedding at this point in our lives because it gets destroyed so quickly by pets and kids, but Amazon Basics bedding never lets me down! Very much recommend that headboard, by the way, if you’re in the market for one. I bought this one as a cheap quick-fix six years ago and it’s somehow still available. The price is crazy low, but the fabric and tufting are beautiful and I just can’t see any reason to replace it when it still just looks so nice to me. There’s definitely a reason that they’re so popular. 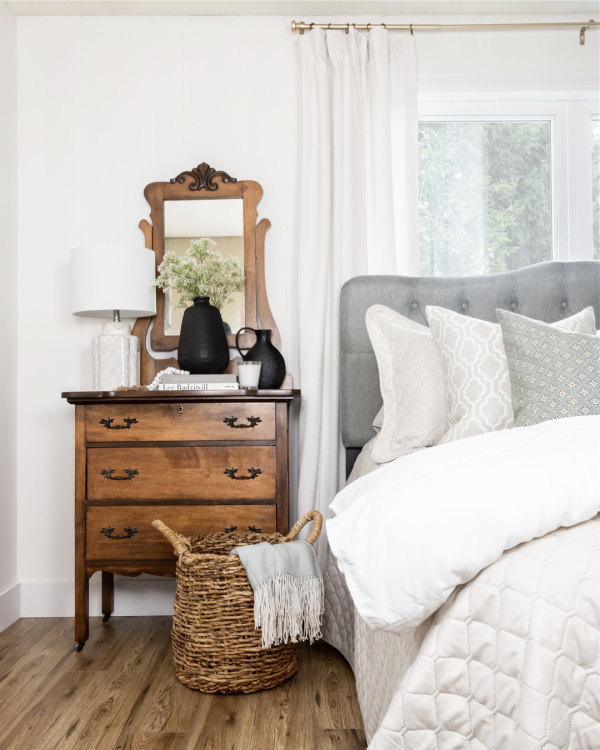