In this post, learn how to grow pumpkins in your garden for fall decorating and fall treats!

We grow pumpkins every year in our garden and they’re definitely one of the most rewarding things to grow. I feel like I say that about so many different things we have in the garden, but pumpkins really are awesome to grow if you have the space! For one, they make your garden look really beautiful and full throughout the summer months without too much effort at all. Then, of course, in the fall when it’s time to harvest, there’s nothing like having a mountain of pumpkins to decorate with without ever having to make one trip to the farmer’s market or the pumpkin patch! It’s probably a little late in the season now to grow pumpkins, but since we’re all starting to think fall thoughts, I thought I’d tell you about this now so you can get ready to grow pumpkins next year. 🙂

How to Grow Pumpkins: Getting Started

You’ll want to make sure that you dedicate a fairly large area to your pumpkins because  – oh wow – do those things ever grow once they get going. We have about 1/4 of our garden set aside for the pumpkins and they truthfully start to take over other areas as well near the end of the growing season. 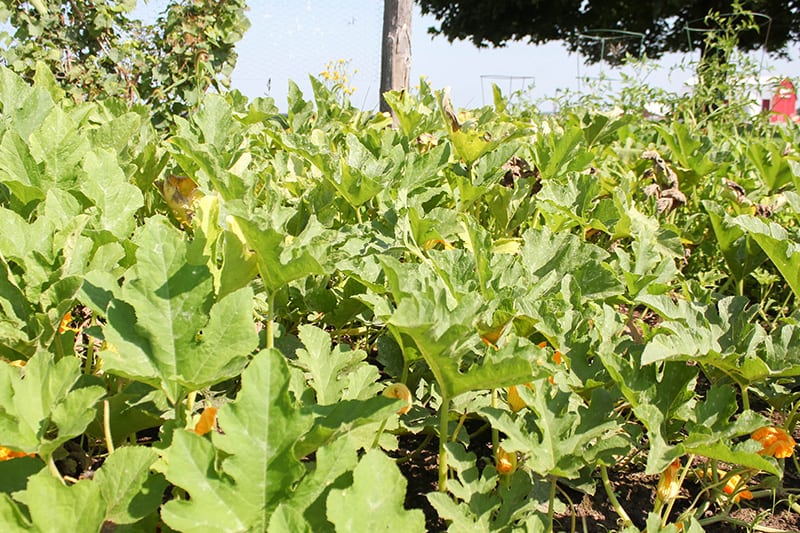 Pumpkins will take about 90 days to reach maturity, so plan accordingly so that they’re ready when you need them. We often plant our pumpkins near the end of May which means that they’re ready to be harvested somewhere around the end of August. That’s probably a bit too early for most people, but it works for us because it allows us to get a bit of a jump on fall projects for blog posts! 🙂 If you wanted pumpkins for November though, you’d want to think about planting your pumpkins around the end of July or beginning of August. 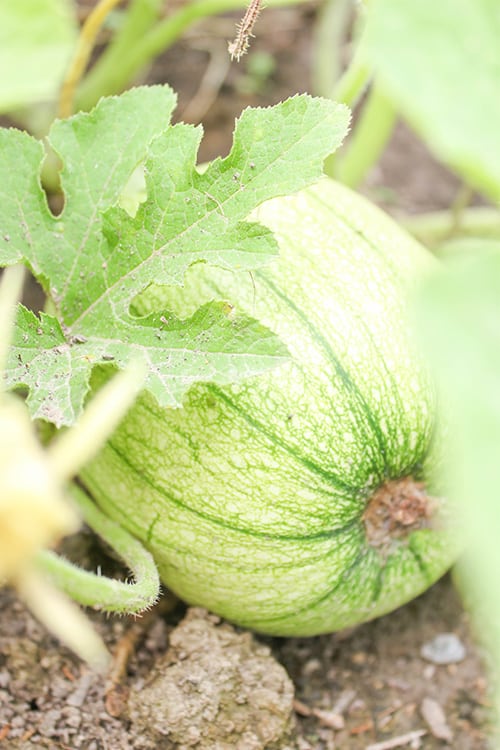 When you go to plant your pumpkin seeds, you want to mound the earth up a bit into a little hill about 10 inches across and place your seed in the middle, about an inch deep. Rather than planting your seeds in rows, focus on giving each mound quite a bit of space, so form your mounds about four feet away from each other. Pumpkins will grow like crazy in every direction anyway, so there’s no point in trying to keep them in tidy little rows! 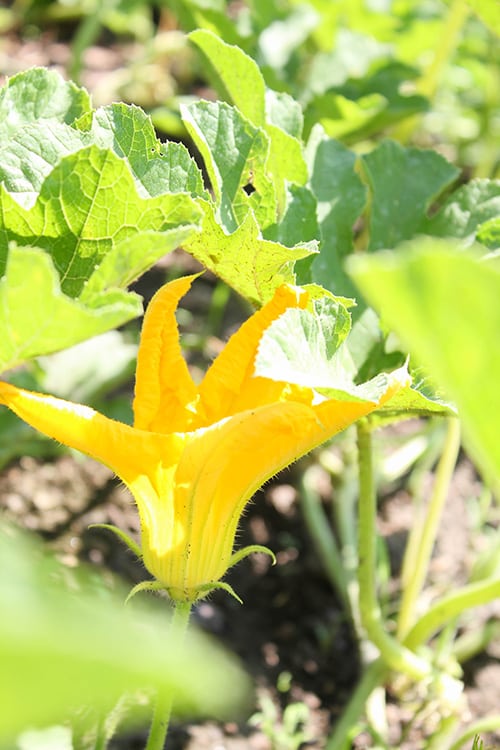 The little mounds of dirt are really helpful because they allow you to see where to water just the seeds rather than watering over whole rows. This really keeps the weeds down in the areas around your baby pumpkin plants. 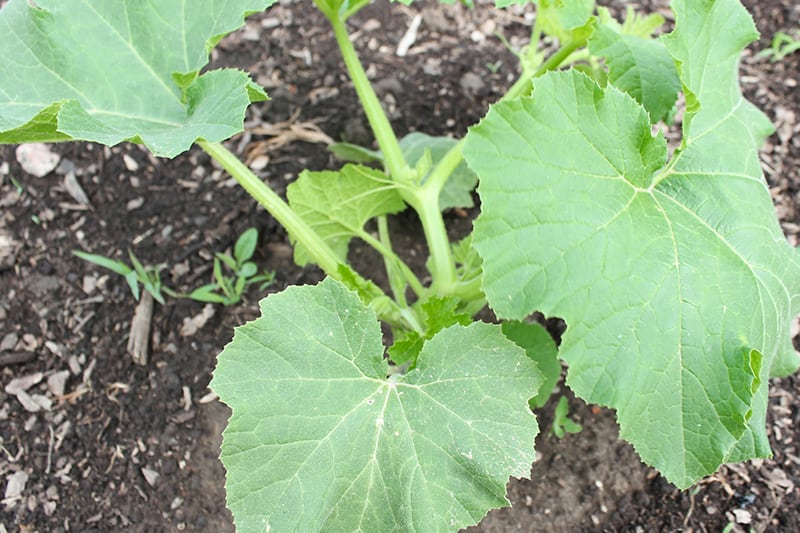 How to Grow Pumpkins: Challenges

There really aren’t a huge number of challenges with growing pumpkins, but we have run into a few things that have made us have some less productive pumpkin years. 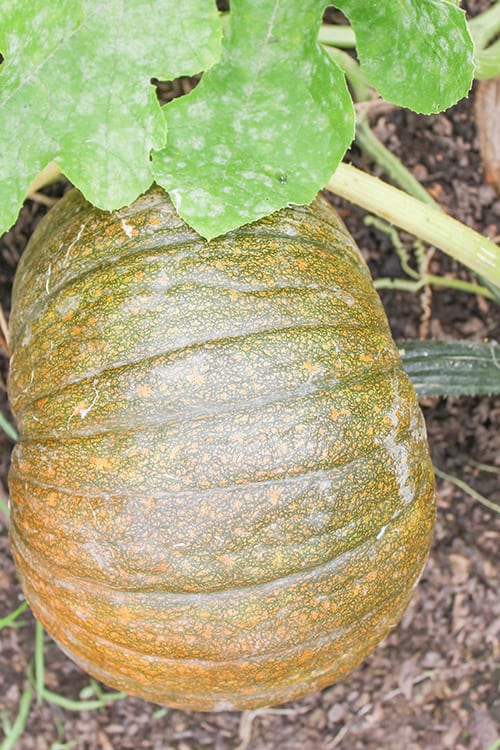 It really makes a difference if you can keep the weeds down when the plans are young and just starting out. Pumpkins are really fast-growers and they will outgrow the weeds, so having weeds in your garden won’t necessarily prevent them from growing well, however, we did run into a bit of an interesting situation with some really tall weeds one year when Jack was really young and we couldn’t make it out to the garden as much. The pumpkins actually started to grow up the weeds, which eventually got to be about 5 to 6 feet tall (#countryweeds), and they ran out of room to grow! It’s like the pumpkins got to the top of the weeds, got confused as to what to do next, and stopped growing. 🙂 We had smaller and fewer pumpkins that year. 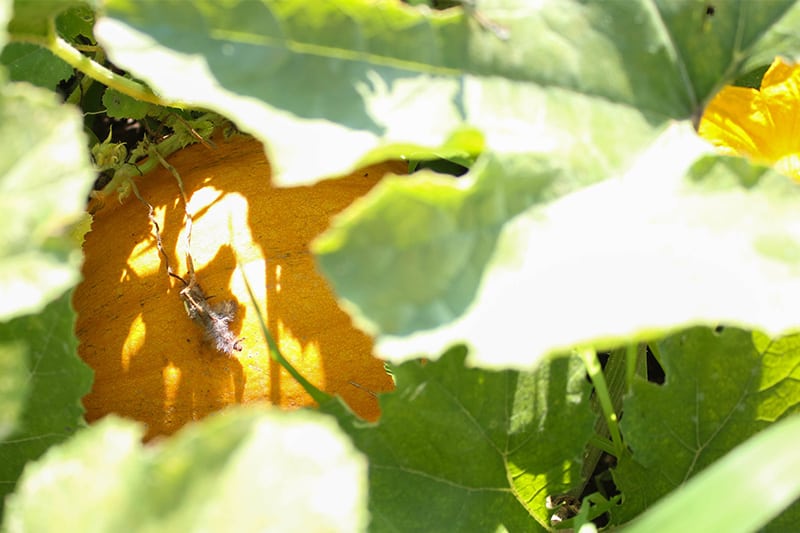 Another issue that we’ve run into some years is cucumber beetles. They tend to show up in June-ish so they’ve only been a problem a few times when we’ve planted our pumpkins earlier in the season. cucumber beetles love anything vine-y so they go after cucumbers, zucchinis, pumpkins, and things like that. Basically they just appear one night and start munching on the leaves. They’ll eat young plants right down to the ground, which obviously kills them. The best solution we’ve found is to use clear plastic domes over our young pumpkin plants until they get to be about 10″ in diameter, or when they can no longer fit under the dome.

Cucumber beetles look very similar to lady bugs, only they’re yellow instead of red. Don’t worry if you see one or two of them later in the season when your plants are larger. The only danger is really when the plants are just babies and June seems to be their peak snacking season. 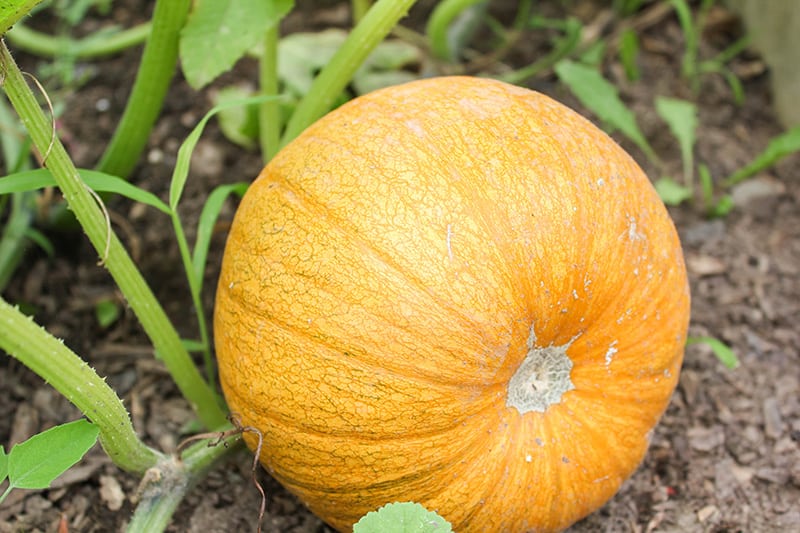 And that’s how we grow pumpkins! We’re going to have a huge harvest this year and I can’t wait to share all that fall festiveness with you soon!