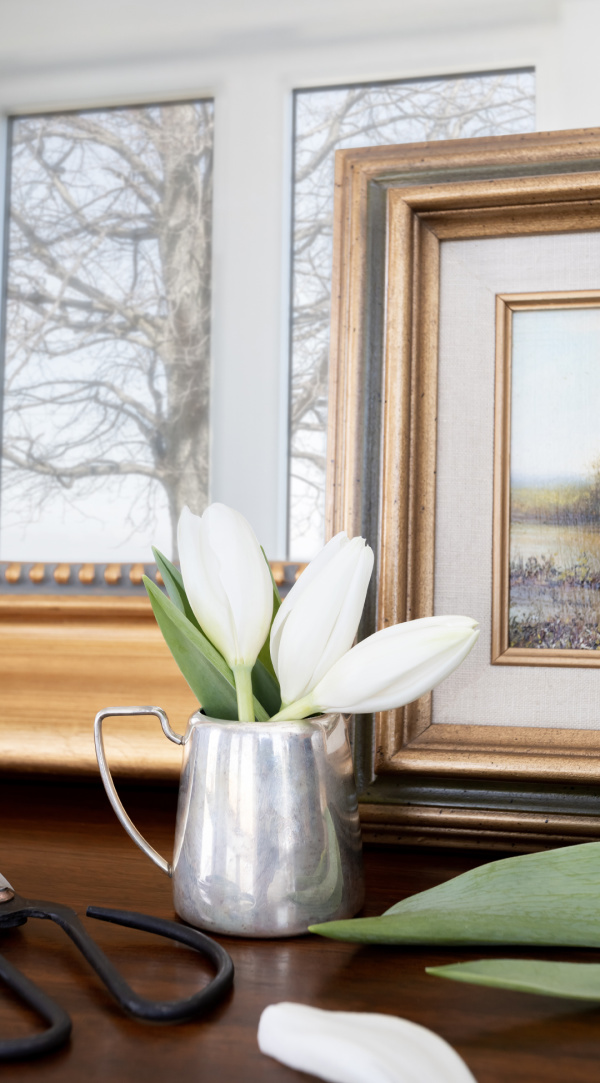 We’ve been having our first little hints of spring around here. The world is still mostly pretty dull and grey, but it’s to the point now where I’m pretty sure we’re not going to get anything more than just a little sprinkling of snow here and there. I even washed and put away everyone’s serious winter gear like the snow pants and ski goggles! This time of year is generally kind of icky as things melt and just get really muddy, but we love the tradition we have where we tap just a few of our maple trees and harvest some sap for maple syrup. We actually have Norway maples, not sugar maples, but they work just as well. 🙂 We got a tree tapping kit from Amazon a few years ago and it’s really simple to use. Once we have about five or six big 4 litre bottles of sap, we boil it all down and we can get about 2 cups of syrup. The boiling takes almost all day, but it’s a fun thing to do at this time of year.

Have you heard of “Project 333”? I seem to have kind of stumbled into participating in it. I’ve followed Courtney Carver for awhile and I caught her on a podcast talking about the project a few weeks ago. Although I’ve known about her Project 333 capsule wardrobe program for years now, something about right now made me think “Hmm, you know, that actually sounds refreshing.” You can read all about how it works over on her blog, or she actually wrote a whole book about it. She does such an amazing job of describing the benefits, and explaining the process. Basically, the idea is that you dress with only 33 items for three months (a season), including clothing, shoes, and accessories. Since we’re almost to the start of the spring season, which starts in April, I decided to do just a mini one-month trial period for March. I absolutely love the breathing room I’ve created in my closet and I just feel such a relief every time I open the doors to put things away or take them out. I do think I kind of overdid it though. I just threw a few things together one evening and I think I may have almost cut back too much. I just added my favorite items for work scenarios, and for more casual days and then I was kind of stuck. I didn’t know what else to add! So I just kind of stuck in 10 pairs of shoes into my list of items at the end, but really I don’t need 10 pairs of shoes at all. But I could use an extra sweater at this time of year! So it’s a learning experience. 🙂 I’ll fine tune things in a few weeks when I pick out my 33 items for spring. Maybe I’ll share the items that I end up choosing for all my fellow fans of decluttering. 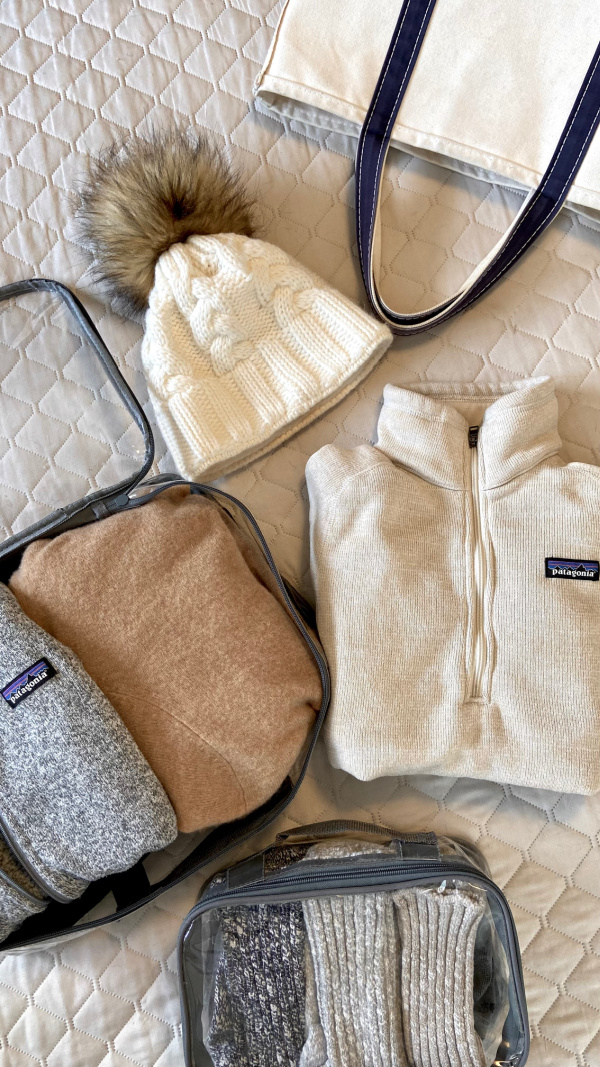 The last few years for March break, rather than pretending that it’s spring here, we’ve starting to treat it as if it’s a second winter break. We definitely would love it to be warm and sunny, but March isn’t quite that here, most days. You get hints of spring, but also a lot of cold, winter-like days and if you try to will it to be spring, you just end up frustrated and cold because you’re not wearing the right jacket. The snow pants might be put away for the most part, but the jackets are still very necessary most of the time.:) We’ve started a tradition of going winter camping every year, usually in a heated yurt, and we all enjoy it so much. If we have a warm, sunny day, we can explore the beaches and eat lunch outside, but if not, we still enjoy the coziness and the winter activities we can enjoy like hikes through the forest and feeding the chickadees. We went for a few days this week again and it was just such a refreshing experience, as it always is. It never ceases to amaze me how much beauty there is to be found out in nature even at this greyest, most “blah” time of year. 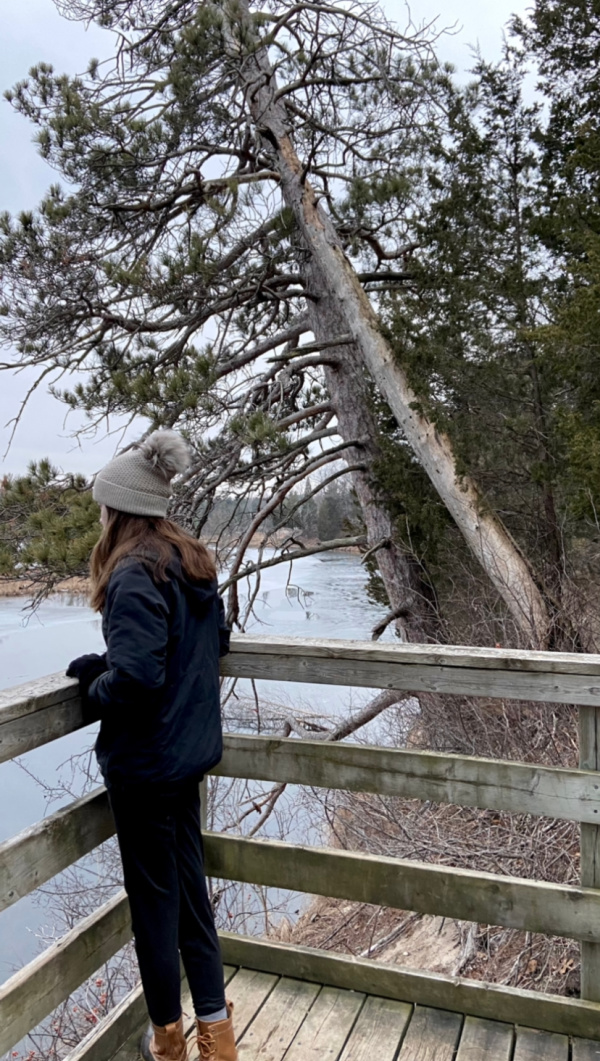 Half of our bedroom is finished and the other half has been under construction for about seven or eight years now. We have one wall where we’ve exposed the brick, but also the ugly header above the door and some of the other structural 2x4s, plastic vapor barrier and things like that. We have another wall and a half of just plain drywall. We had a burst of inspiration last week and we decided to make a little progress! Maybe it was that new light fixture I finally ordered? Anyway, we have drywall finishing underway, I ordered some new curtain rods as well as some pretty finials to replace the ones we put in last fall in a rush for a project that I just never felt were quite right, and we installed that beautiful new light fixture. All just a bunch of little things, but it’s nice to get them checked off the list and it feels good to do something relatively simple that ends up with actual progress that looks pretty when it’s done.  🙂 We have some plans for the trim in there that I’m really excited about too. The closet door is painted Benjamin Moore “Onyx”. 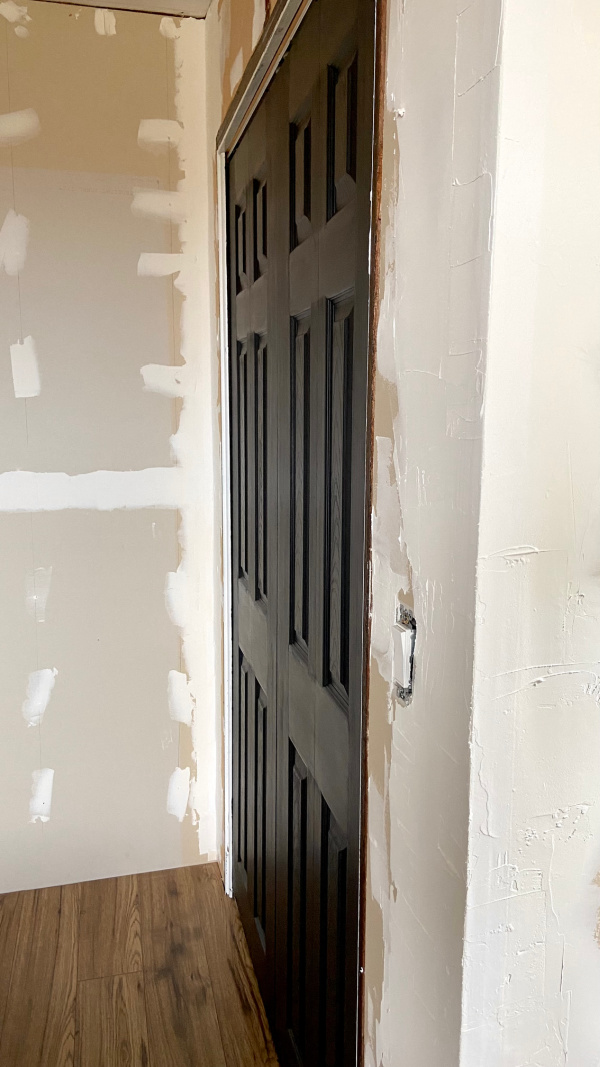 We picked up my niece and brought her home with us after we had a shoot near her house a few hours away and it was so nice to get to spend some time with her. “Cousins time” is just such a special thing and we have such a hard time getting them all together these days between sports and life and then the lockdowns that came before. I’m just trying to recognize how great these moments are when they happen and figure how to create more opportunities to get them all together in the same room whenever we can. It’s important.

-I’m finally learning how to make reels “properly”. And by properly, I mean the lower-quality, more casual reels where you just use your phone to capture a little idea in video form. We’ve always used the real camera, lighting, gimbal, tripod, and all that, then we’ve done the editing in Adobe Premier on the big computer. The actual quality of the reels is much better that way, for sure, but I think there’s something really great and friendly about the more casual reels too. Anyway, I never bothered to take the five minutes to learn how to make them because we have all the real camera gear, but I’ve always wanted to. So that’s a little project I’m working on. It’s fun! I’ll be sharing them as I make them over on Instagram. Follow along with me there if you aren’t already!

-I’ve really been wanting a fancy dog bed for Chuckers. I just can’t get it out of my mind lately, I don’t know why. Maybe because I realized what rough shape his current one is in and then I realized that I could replace it with something nice instead of another $30 piece of junk that will just look sad again in a month. I randomly saw someone share the Dogwood Co. wicker beds the other day and I thought Aha! That’s the one!… and then I discovered that they of course don’t ship to Canada. So I’m still on the lookout. This shop on Etsy seems to make some really good options, too. This one in particular is really nice. Has anyone found a good wicker dog bed available in Canada or a similarly-nice dog bed option?

-These black modern decor links were such a great find. You see these types of objects everywhere lately and they can be really expensive. You’ve probably seen my marble chain object show up in quite a few photos. I ordered these links off amazon just to see if they would be any good because they were about 1/3 of the price of others that I’ve seen. You can see below what arrived! I love everything about them. If you’ve been liking the look of these objects stacked on top of books on a coffee table, but haven’t been able to justify the price, these will do the trick quite nicely! 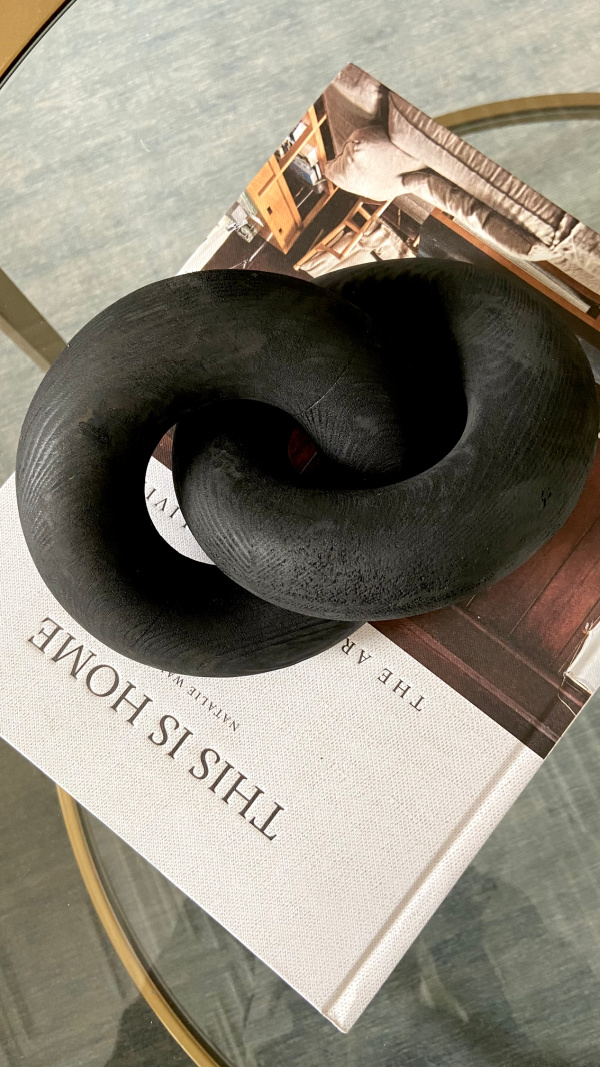