I think it’s safe to say that we’ve officially hit the toddler stage with Jack! If you have grandkids, nieces, nephews, neighbors, or kids of your own who are at the toddler age, then you know that it’s a constant battle to try to keep those little hands busy. If you don’t, they’ll find something on their own and it probably won’t be the best thing! Maybe something like trying to throw out every diaper they come across, clean or dirty, and then desperately trying to pull them back out of the trash can or diaper genie. Or eating the cat food. Or unrolling the toilet paper and shredding it into tiny pieces and then eating those pieces. You know what I’m talking about.

We’ve got Jack in daycare three days a week now and he’s loving it, but I’m really trying to make the most of the days when he’s home with me and I’ve been trying to come up with some fun things we can do together while we wait for spring. I tried this one idea out the other day and Jack just loved it, so I thought it might come in handy to you too if you have little people to entertain!

It’s so easy, which is key!

Grab a few different colors of craft paint. Any paint will do, and any colors! They won’t care, as long as they can squish it all together. You’ll also need a big ziplock bag and some type of tape. I just grabbed the zebra print duck tape because it’s the first thing I saw, but painting tape would work well too. 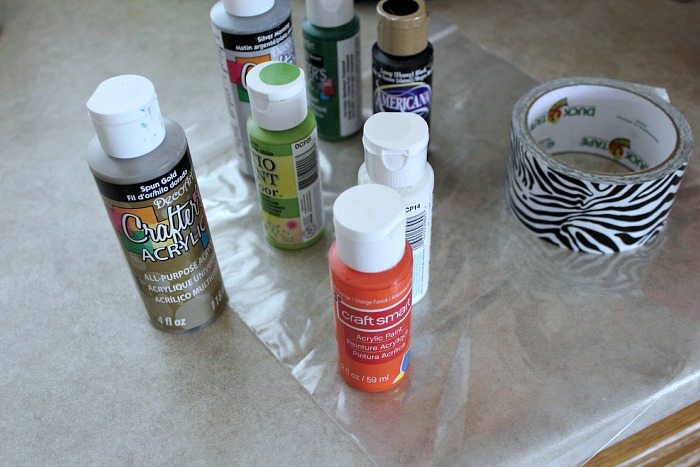 Next, open the ziplock bag up and put a squirt of each paint color inside. It should look something like this! 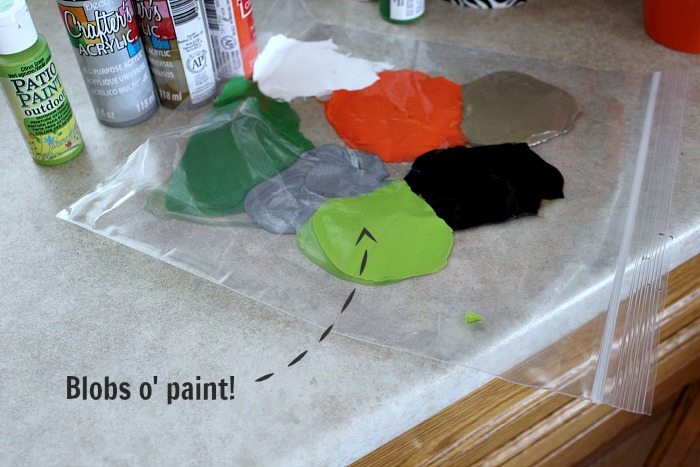 Seal the bag up really well and then tape it down on the floor, or a table, or whatever. I used the floor because I just thought Jack would like that the best. 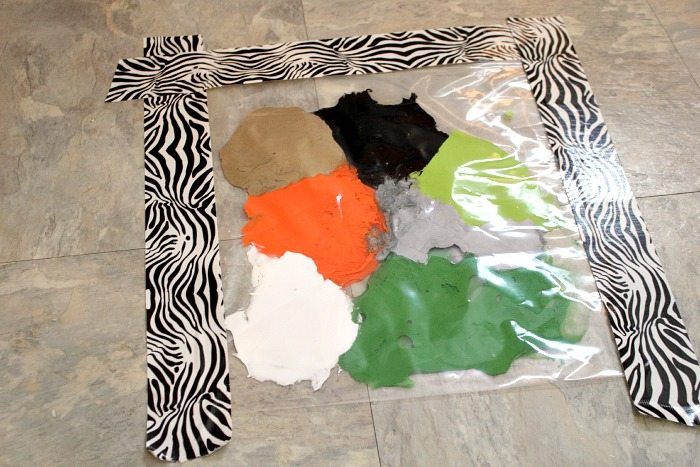 At first I thought that taping three sides would be enough, but I quickly discovered that Jack was smart enough to get under the open side and try to pull the bag up to get a closer look. So I added more tape there. 🙂

When I brought Jack down from his nap, he went straight for it! 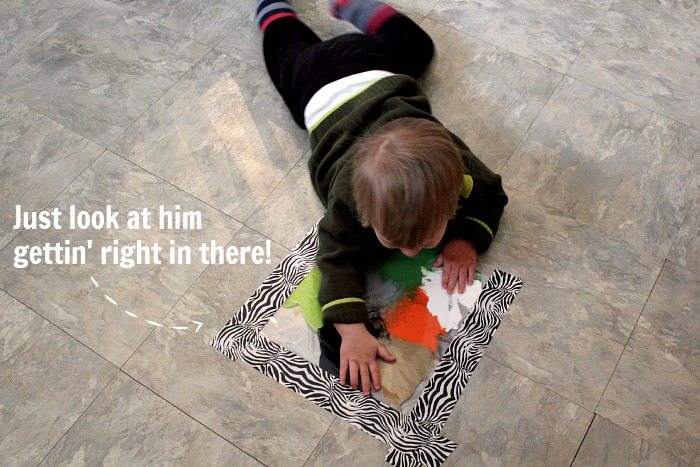 Actually, he pretty much threw himself at it! 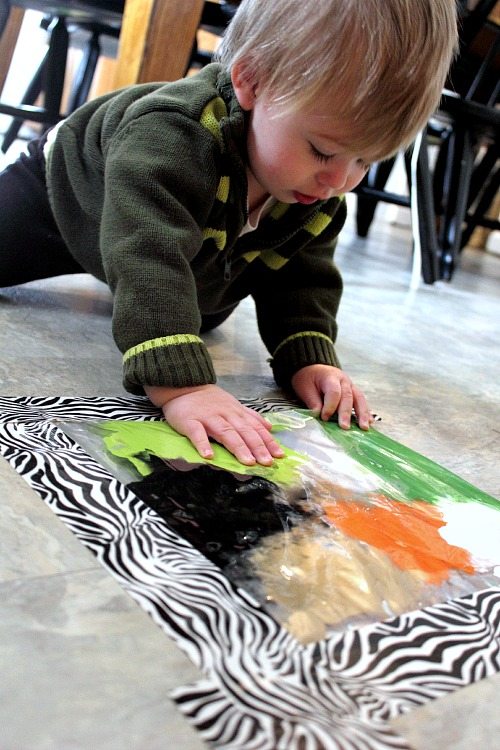 I felt pretty much like the best mom ever. 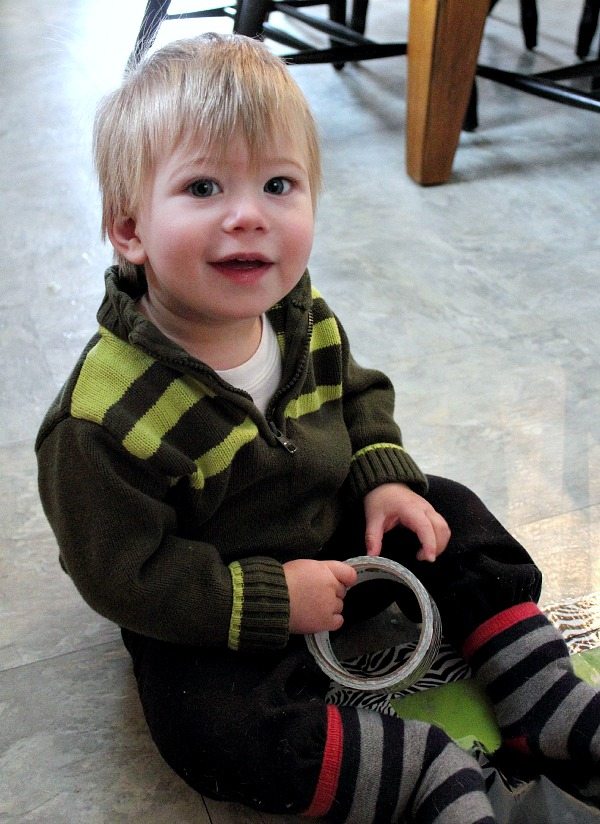 I left it down for about 4 hours and we kept coming back to it and then Kennedy came home from school and walked on it a bit because it was fun and squishy. 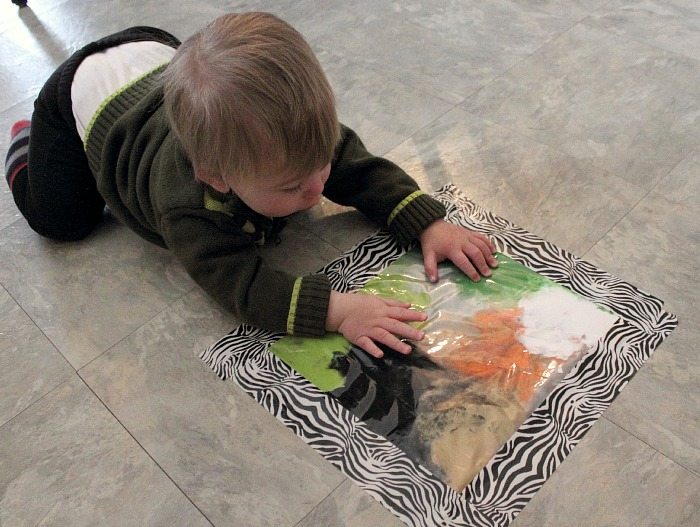 I thought I might need to scrub a little bit to get the glue from the tape up when I pulled it all up later that night, but it actually came up just fine!

So keep this one in your back pocket (well, not literally,but you know what I mean) for the next time you have toddlers to keep busy!