I thought it might be fun to give you a little update on the epic, ongoing back stairwell project today! 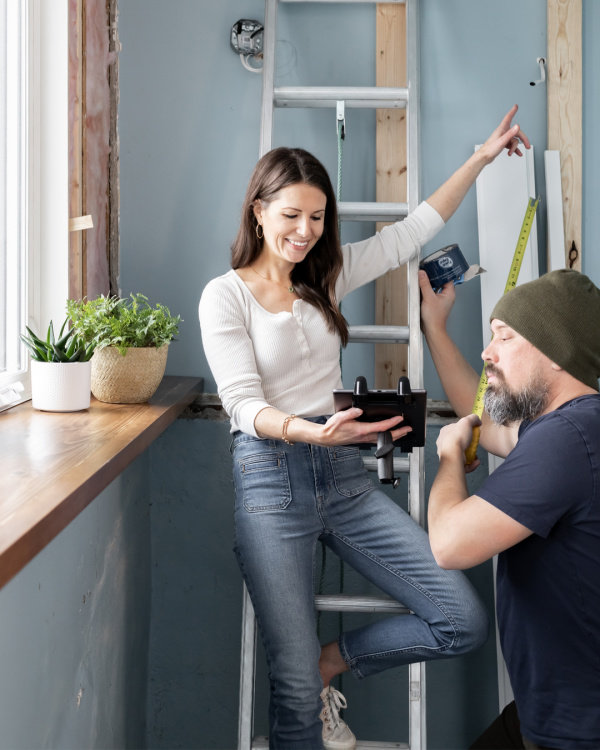 Oof. This project. So much is getting done with it and yet we’re getting nowhere. There’s always something. Either we’re super busy with shoots, or the next step in the process involves cutting wood and the weather is just too cold and windy to justify going back and forth to the garage a million times to use the saw. So I really can’t get in there and do anything pretty at all until Chris gets all the necessary “underneath” stuff done, which is frustrating. It’s been over a year now on a project that was supposed to be much, much quicker. We’ll get there though! Better late than never right? 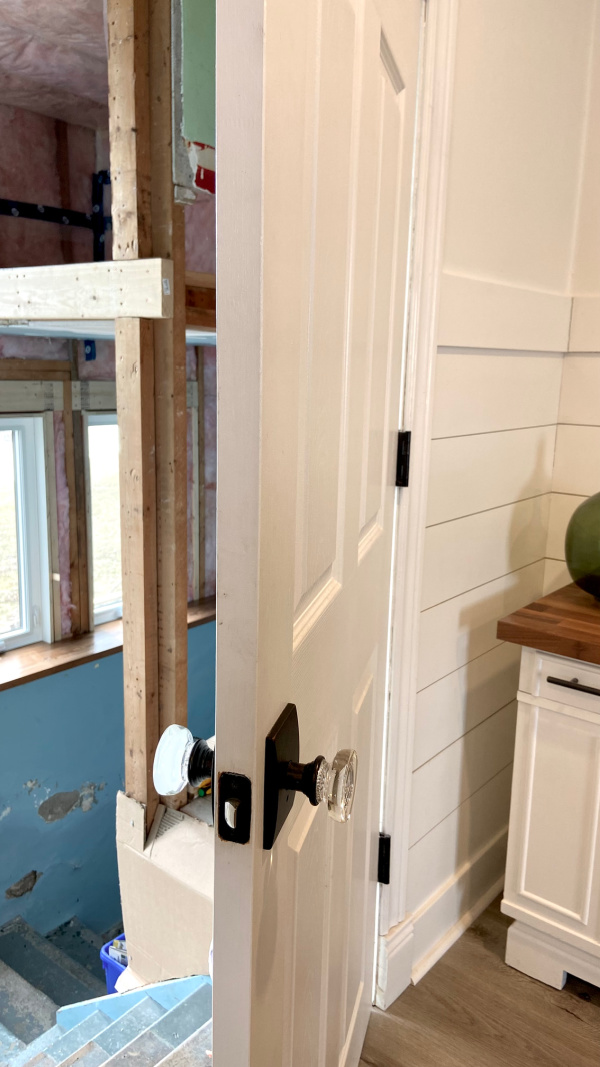 So the biggest thing is that we now have the room fully insulated and that has made such a difference. We used to have to keep the door from the kitchen to this area closed, especially during -10-ish weather like we’ve been having and now it’s no problem to keep it wide open. Chris opened up a part of the attic up there and insulated all around it so that he’ll be able to make a giant cabinet to fit in there where we can put all of our Christmas bins when they’re not in use. He also got the whole back wall around the new door and windows fully insulated. 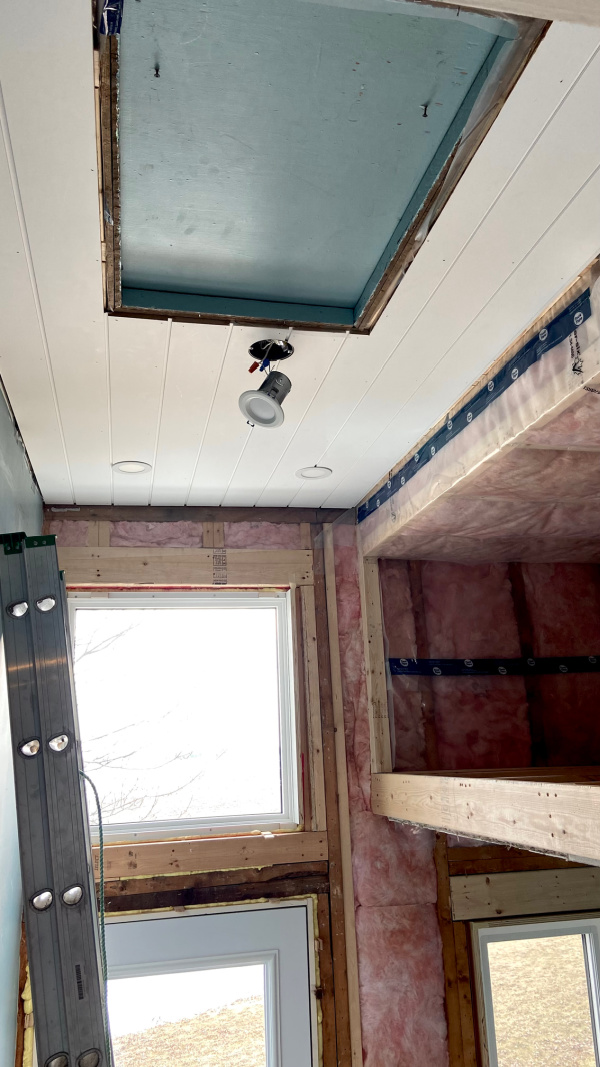 All of the new pot lights are in, which make the space so bright and welcoming at any time of day and the wiring is in for the sconces and the pendant too.

One kind of funny snag that we hit was when we went up to do anything that needed attic access, like lighting and insulating, we discovered that there was just tons and tons of stuff stored up there from the previous owners. Like, boxes upon boxes. There was so much in some parts of the attic that we had to actually remove it because it was just completely in the way. And this isn’t like a clean, storage space attic. It’s just an empty cavity filled with insulation and I guess they’d forgotten about the stuff up there because someone had actually blown in some extra insulation on top of the stuff at some point. No real treasures though, mostly. Just old school papers and pieces of carpet. Still, definitely a good reminder of how great it is to actually let go of your unwanted items rather than holding on to them for 40 years until one day they’re just a nuisance. 🙂

We have two new things that actually are real, pretty, finished parts of the room done now and I’m just enjoying them and cherishing them as much as possible until all my back stairwell dreams can finally come true. First, we did a really beautiful tongue and groove ceiling before we installed the pot lights, which I just love so much. It’s so fresh and clean and such a welcome change after the scary crumbling ceiling we had there for so long.

And my plant shelf is in! Chris built me this long wood shelf and he integrated it into the window sills so my plants can have lots of space to get right up close to the light. I just love it. The color of the stain we used is called “Early American”. 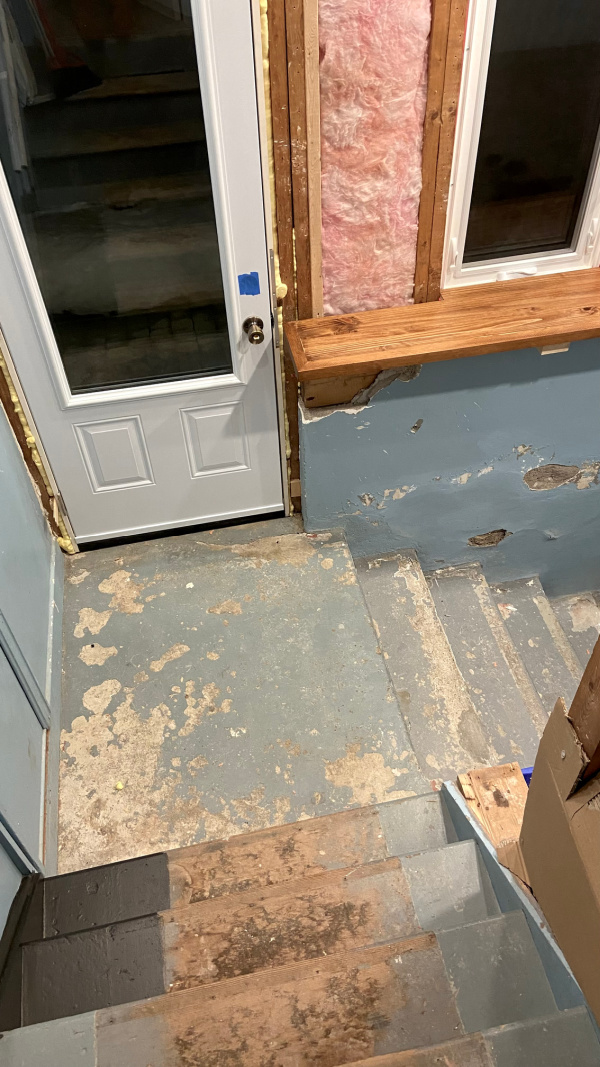 One day I decided to test out a little patch of the black paint I want to use for the stairs (which will be sanded down first when I paint them for real) and I was taking photos of it to see what I thought of it in different lights. So this is it at night, obviously. I love it! The color is Benjamin Moore “Onyx”. If you’ve been following along with my other assorted updates, it’s the same black I used on our closet doors and the French door between the kitchen and mudroom.

I think I’m pretty well settled on quite a few things when it comes to how we’re going to finish the space, but there’s always time to change my mind at the last minute, of course, since not many things are actually ordered yet. I thought I’d give you a little sneak peek of what I’m currently thinking anyway. 🙂 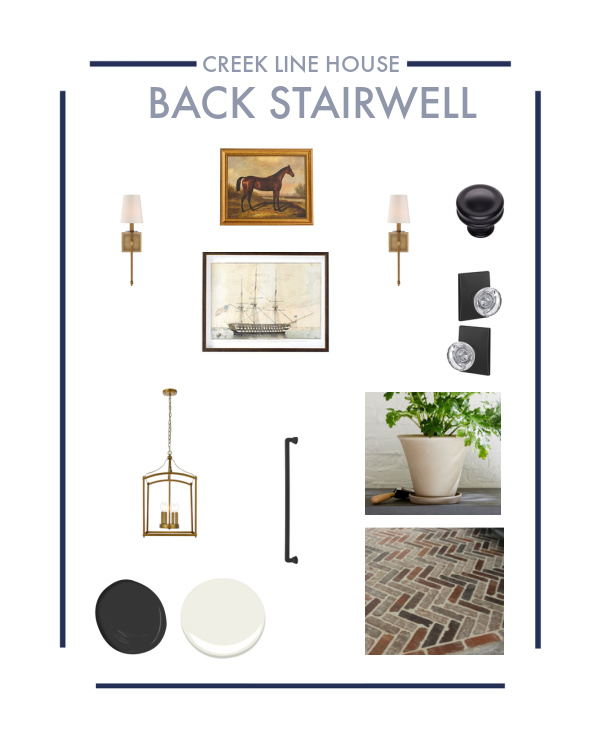 Can’t wait to see it all come together, eventually!