Out in the garden or a bouquet in your home, nothing better announces the arrival of spring like freshly blooming tulips!   Give your indoor bouquets that springy feeling for longer with this little trick to prevent drooping flowers.

Depending on where you live, you’re either right in the middle of tulip season right now, or you’re about to be getting into tulip season any second now, so it’s the perfect time for me to be sharing this little trick which prevents drooping flowers! It’s a goal of mine to get some tulips planted somewhere on our property this fall so I’ll have my own tulips popping up at this time next year, but for now, I’ve just been picking up a little bouquet of grocery tulips every now and then and they’ve been just the thing to make my home feel a little extra springy. 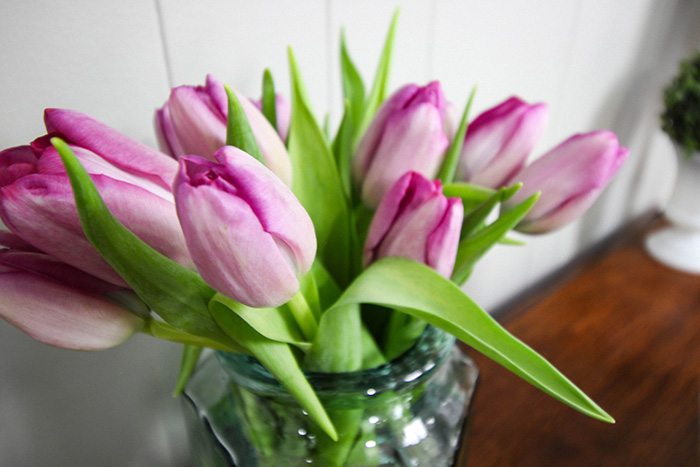 I shared a few tips for keeping cut flowers fresher for much longer the other day, but I have one trick that I specifically like to use for tulips that I thought I should mention as well.

Tulips have a tendency to get really bendy in the stem-area and just kind of flop over and look sad. This can be helped by keeping your flowers trimmed everyday so they don’t get overgrown, but this is another little trick you can have up your sleeve if even regular trimming isn’t keeping them looking as perky and springy as you’d like.

So here’s what you do to prevent drooping flowers! 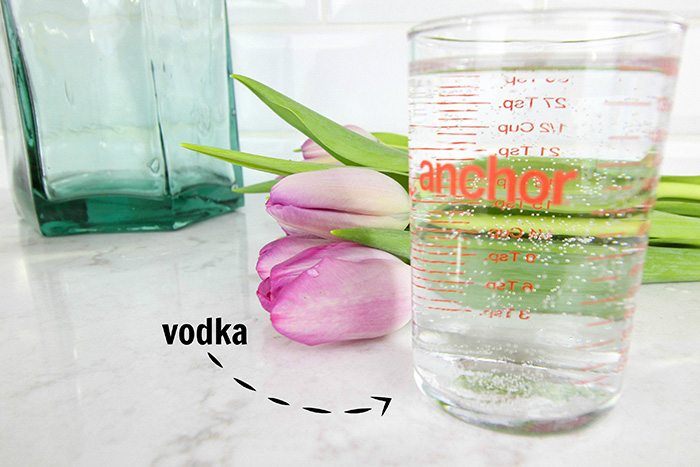 If your tulips are looking sad, make a mixture of one part vodka to seven parts cool water in a vase of your choice. Pop your tulips in the vase and within a few hours, you should see them perk right up.

The vodka also helps to keep your tulips upright over the next few days because the alcohol acts as a growth retardant for the leaves and stem, but not for the flowers themselves. Tulips tend to be able to grow an extra few inches after being cut so even if they start out upright, they’ll often keep growing taller and will eventually flop over anyway. The vodka stunts their growth so your arrangement will always look just as you originally intended it to! Thanks to the Cornell University website for all the science-y facts! I always knew this worked, but I didn’t know why it worked, so now I do! 🙂 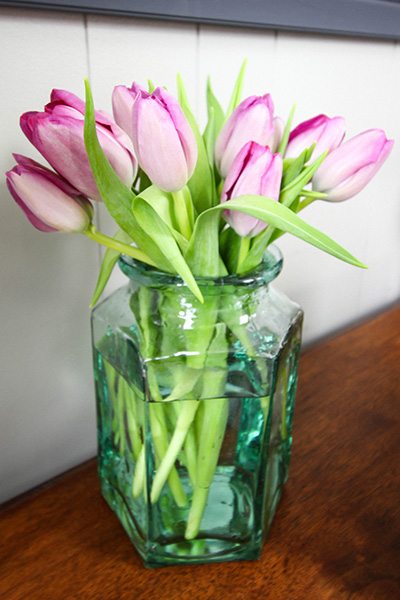 So there you have it!   No more drooping flowers.  One more little gardeny tip to add to your bag of tricks this spring! Have you tried using vodka in your tulip vase before?