Look no further than your kitchen cupboard if you’ve been looking for the perfect solution to organize all of your small jewelry and accessory pieces! The ice cube tray jewelry organizer to the rescue!

This ice cube tray jewelry organizer idea was one of those ones that I just had to jump up and try as soon as I thought of it. Those are always the best ideas, aren’t they? I love this idea because most people probably have a few extra ice cube trays hanging around in the back of a kitchen cupboard somewhere, and if you don’t, they’re pretty easy to find at a thrift store or the dollar store! And who doesn’t have a bunch of tiny junk somewhere that could use an effective and cheap organizing solution? 🙂 Even if you don’t have a bunch of little earrings and rings, this idea works just as well in a junk drawer or to organize little fasteners and other bits of hardware.

If you know me, then you know that I basically just wear the same little pieces of jewelry all the time. For some reason, that still hasn’t stopped me from collecting a few little shiny things here and there, just for fun. The little blue and white dish that I was using to hold these things was getting pretty crowded and it was getting hard to find things, so I knew another solution was in order.

Of course, when I organize something, I like the idea of a solution that looks neat and tidy, but also that functions really well. There are some beautiful jewelry organizers available to purchase out there, but for some reason I always get a little extra excited about the idea of finding a solution to a problem using something that I already have on hand. This white ice cube tray is perfect because it actually does look clean and tidy and it displays the jewelry pieces quite beautifully, but it allowed me to reuse something that already exists rather than creating more plastic waste that will eventually end up discarded or needing to be recycled. It was also free! 🙂 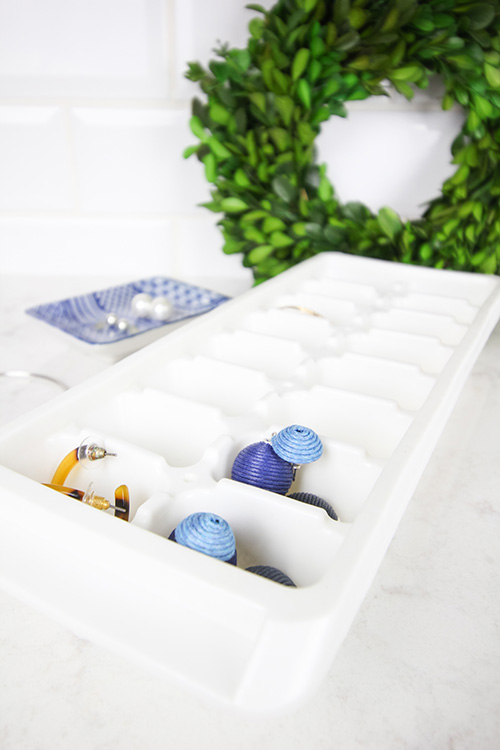 Organizing With the Ice Cube Tray

I mostly used my organizer for earrings and a few rings. I ended up sorting things by putting the larger pairs of earrings in their own separate “cube”, and then for the smaller pairs, I put several similar pairs together. I just wanted everything to be really easy to see so I could easily locate an item in just a few seconds. 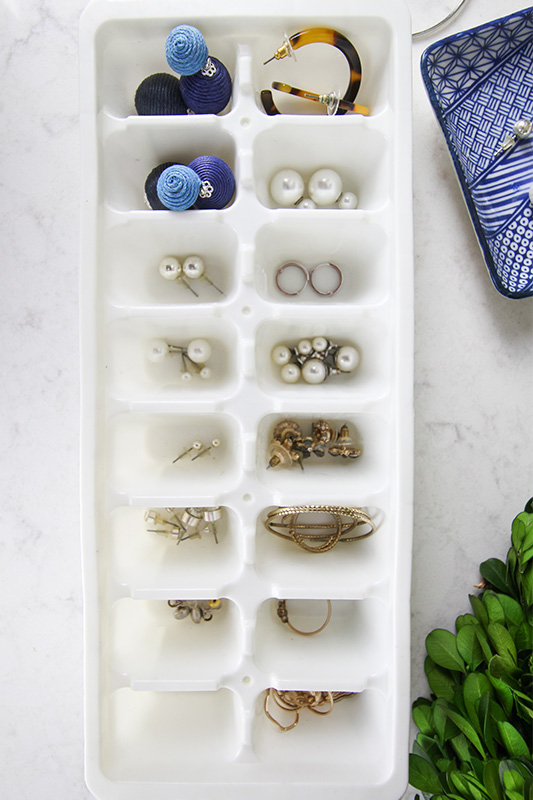 It works! This little organizer works really well in one of the larger drawers in our huge bathroom vanity. Can you believe we still have a lot of empty space in this thing even though we’ve had it for a few years now?

And -bonus point- this ice cube tray jewelry organizer can be easily tossed in the dishwasher when I find it’s starting to get a little dusty. So, it’s basically perfect for this purpose in every way. 🙂

Do you use ice cube trays for organizing around your house? 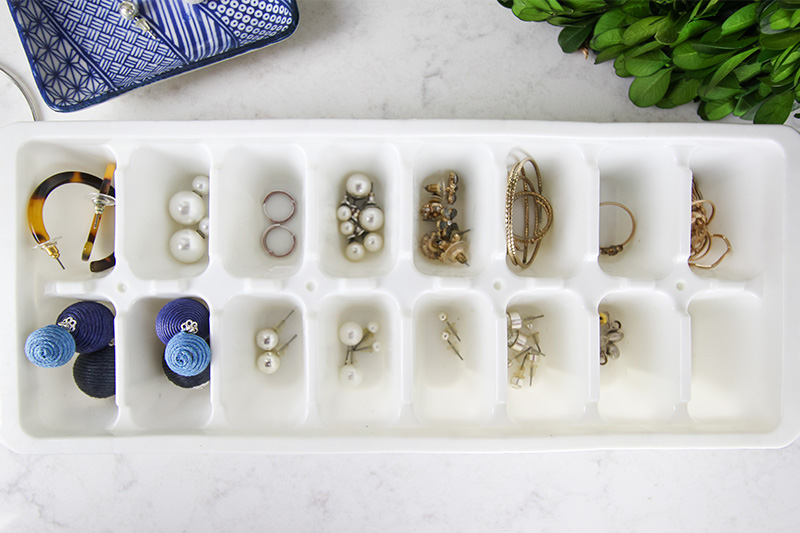