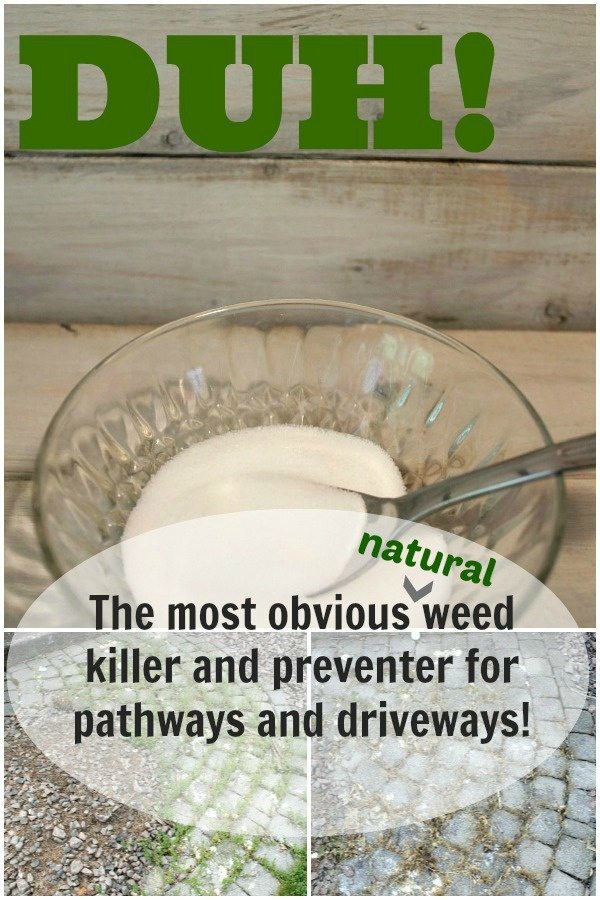 So, remember when the Romans salted the earth?

Just kidding! I have a little more to say about it than that. If you start looking up natural weed killers, you’ll find all kinds of good stuff. There’s also a lot of discussion as to which ones should be used and shouldn’t for different applications. I’ve been trying a whole bunch of them out and I’ll be sharing some of the best ones I’ve used over the next little while.

The idea of using salt appealed to me because it’s so darn simple and so darn cheap too. And it really works! Check out my front pathway. 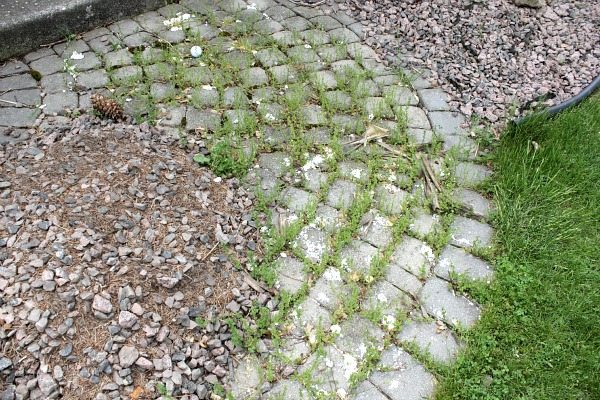 Don’t worry. I’m thoroughly embarrassed. We’re in the process of removing all that pink rock from all the garden, so it’s pretty much everywhere right now. And there’s a golf ball there for some reason too. I hope that doesn’t mean that Chris was hitting balls at the house.

But look! Here’s the after! 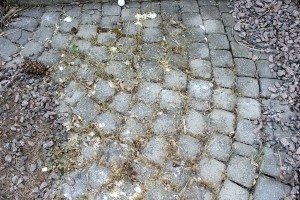 Good and dead. Most of that white powder that you see is actually Borax, which I’d tried a few weeks before and just never swept up. It didn’t do a thing for my weeds.

Of course the weeds still need to be pulled out, but now they come out as one piece instead of breaking off and re-growing. I can’t believe I never thought of this these last few years as I’ve been trying to keep up with these weeds. I just can’t believe it!

So you want to know a little more about this salt trick, don’t you?

Well, how quickly and how effectively it works depends on a few things. It works by completely dehydrating the plant, so a nice hot sunny day really speeds up the process. I tried this during a hot spell and it worked in less than 24 hours. This patch that I’m showing you now took about 5 days because it was a little bit cooler and more overcast during that time. It still worked, but it took some time. Of course it also works better on certain weeds compared to others. You really do need a few different tricks up your sleeve to kill all your different weeds, but luckily I’ve got some of those in store for you soon. Salting only takes 20 seconds though, so it’s worth a shot if you’ve got a walkway that looks like mine.

Where we live, the climate is quite humid, so the salt really clumped up and stuck exactly where I put it, but if it’s dryer where you are, you may want to sprinkle the ground with some water first so the salt doesn’t blow away.

Something else you should know: This salt trick is a little controversial in the organic gardening world according to my reading. If you over-salt your yard, then you risk the salt leaching into the ecosystem and harming all kinds of plants, animals, and water systems. My thinking is this: Harmful chemical weed killers do that anyway, but they’re also harmful to you. At least you know that salt is safe for your family. Use the smallest amount of salt possible. Start with just a pinch at the base of the plant on a sunny day and see what happens.

Never salt in an area where you hope to have things grow in the future! That’s why it’s also a weed preventer. Nothing will grow again for at least a little while in the areas where you’ve used salt. It’s perfect for those driveway cracks and pathways like mine.

So what do you do about those weeds that don’t react to salt or that are in the middle of a garden? Stay tuned! I’ve found some great solutions to those too!

*update* You can check out my magical natural weed killing potion here!

These ideas might come in handy for you too!