So, three years ago, we took the leap and bought the old farm house. We’re livin’ the dream. A lot of people spend hours watching renovation shows and hope to one day be able to bring an old beauty back to life with a little creativity and a lot of hard work and on the surface, especially on TV, the whole thing can seem pretty exciting and romantic. I’m not saying that it’s not, but I am saying that when I tell you about how scary and shameful many parts of our home still are, I’m not lyin’. Since about 98% of the time, I show you fun, pretty pictures, I thought it might be fun to have a look at the other side of reality at our place. Who doesn’t love to snoop through other people’s messes some times? 🙂

So of course when you buy an old house like this, you’re going to get an inspection. Because you’re smart like that, right? You want to know what you’re getting into. Well, as fun and interesting as those things are, it seems like they never really tell you the full truth. ‘Cause then, honestly, no one would buy houses, ever. The thing is though, as scary as some of these things can sound on paper, none of them have been something that we can’t deal with. So let’s tour the madness!

In almost any old house that you get into the wiring is going to be straight up weird. I can pretty much guarantee it. There were so many switches and extra thermostats and gadgets that were just taped over when we moved in here. Our house didn’t even have electricity or running water when it was built, so these things were added in over time and there have been a lot of different ways of doing electrical throughout the years. We’re lucky to have a couple of rooms (like the kitchen and master bedroom) that are completely modernized and up to code, and the rest of the house is only a little outdated, mostly. One of the houses we looked at had all kinds of crazy things going on, like knob and tube wiring mixed with other things, and it was just a little too much for us to deal with at the time. We do have some pretty ridiculous looking outlets though. They’re functional, but we’ve been slowly updating them as we go through the renovations on different rooms. 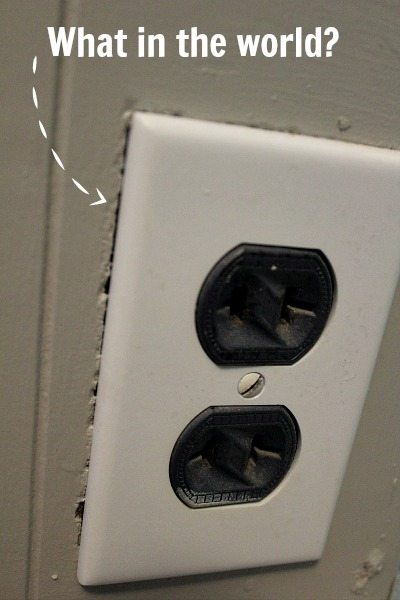 So, our roof wasn’t too old when we moved in. It was about 10 years old, but it was leaking in MULTIPLE places! All over the house. We replaced it with a new steel roof last year, that’s supposed to last until the end of time, but we still have some pretty dramatic evidence of the stress we felt every time it rained that first year. And it always rains here. 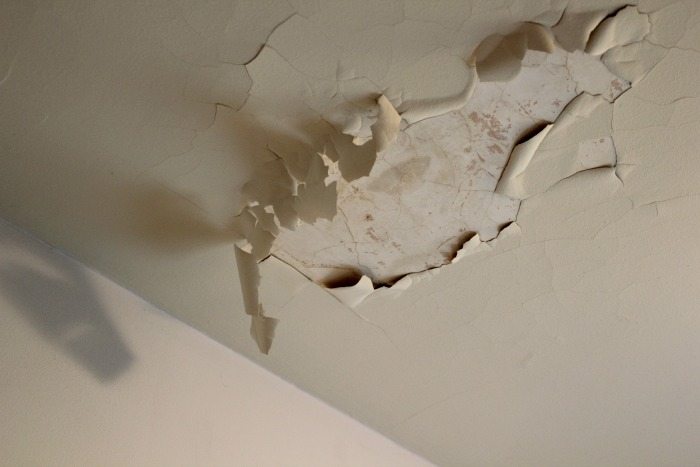 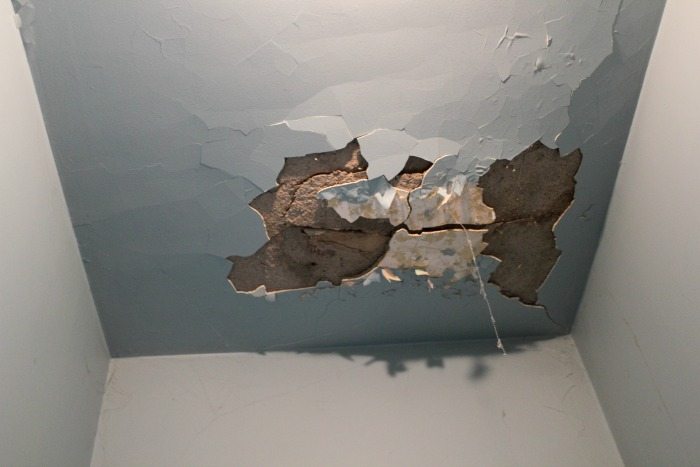 Yup, that’s for real. When the roof used to leak, pieces of cement board would fall out and land on the stairs below.  Thankfully this is just in a back hall leading down to the basement that we don’t use very often, so it’s not a high priority. It definitely reinforces my point that our house is far from perfect though, doesn’t it?

Speaking of basements, I can’t believe that I’m about to show you ours.

Let’s just get it over with. 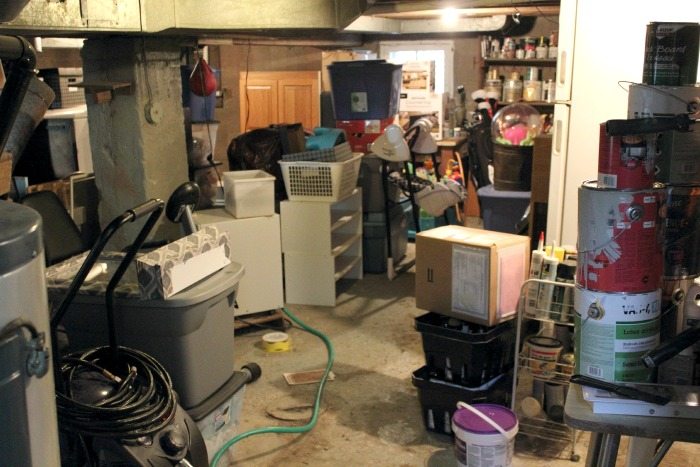 Again, as far as old farm houses go, this one is actually pretty good.  I swear that one of the basements we looked at was half swamp. This one is at least dry enough to store our stuff in and keep a usable extra fridge in. In time we hope to really clean it up and make it a really nice storage area, but that’s obviously a long way away.

Seemingly Random and Senseless Renovations of all Kinds

I can’t tell you how many times I’ve cursed the previous owners. Why did they do all these things to this nice old house?! Well, I’ll tell you why. Because all of these things seemed like a good idea at the time and worked for the family here at the time. And there was a lot of time. So things like the wall paneling, multiple colors of peel n stick tile, and terrible paint colors, were all perfectly lovely at one time, I’m sure. 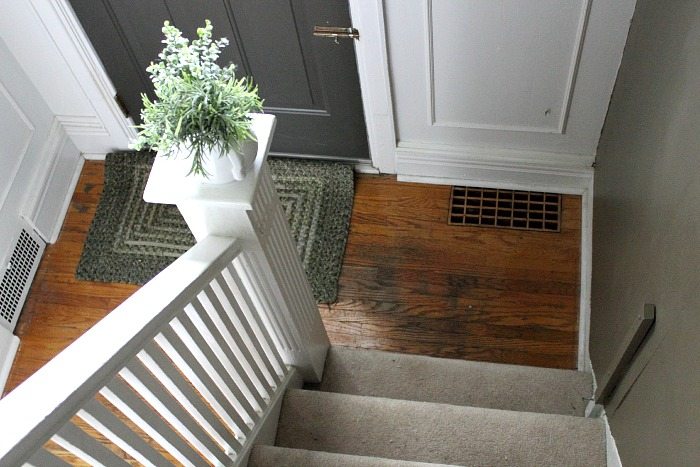 Here’s one spot where I’ve pulled up the peel n stick tile off the hardwood and then haven’t done anything about it since. See? Even I’m contributing to the madness! Why did I do that? Even places where the previous owners did a quick and not-so-quality job are understandable, because who hasn’t done a little quick fix “just for now” and then left it for way too long? Well, now it’s up to us to deal with all these things, but that’s what we set out to do, so we only have ourselves to thank for that, really! 🙂

Old houses can build up quite the impressive smell. Cooking smells, pet smells, people smells, garbage, leaky roofs, all building up over 114 years… and yeah. Luckily a good primer before painting, and good basic renovations do help a lot. 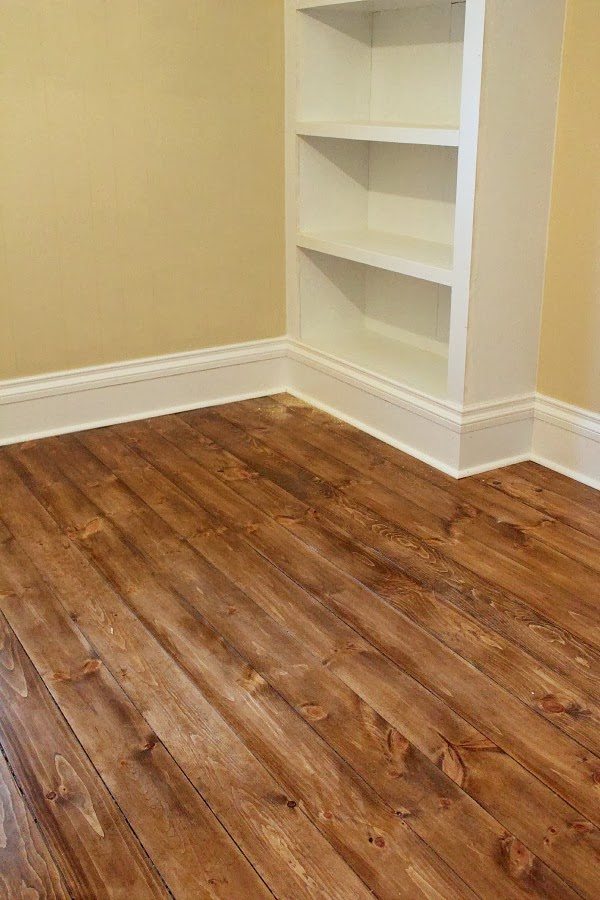 I don’t think “level” was really a thing back when this house was built. They built the outside walls out of brick first and then filled in the inside walls after. Of course, over time everything settles and there are definitely noticeable slopes in the floors in some of the rooms, but you just have to go with it. Chris loves his level so this can be a challenge for him, but he’s learned some ways to work around all the weird angles that we find in this place.

As much as restoring an old house can be a big, frustrating mess that you don’t see coming, there are probably just as many benefits that will surprise you if you take on the challenge.

For one, building a house back in the day, without all of the technology and conveniences that we have now meant they REALLY had to plan out what they were doing. If you find a house that’s still in pretty good shape 100 years later, chances are that the builders of your home did a pretty great job. Our home sits right next to a creek, too close by today’s building standards, and yet we never get a flooded basement, even when half of the town is underwater. Our house is also incredibly energy efficient in a lot of ways. It’s still cool here in the Spring long after everyone else has had to turn on their A/C and we turn our heat on in the Fall pretty late too.  Strategically planted trees, and double-brick wall construction seem to have made a big difference for us.

We also have an amazingly unique floor plan, one that you’d never see in a new build, but one that really works for our family. Our kitchen and laundry room are in an addition that can be totally shut off from the rest of house so I can get stuff done late at night or early in the morning without disturbing anyone and there’s a washroom in there that seems really strange until you realize how convenient it is to be able to do laundry, bath the kids, and cook dinner all pretty much in the same room. 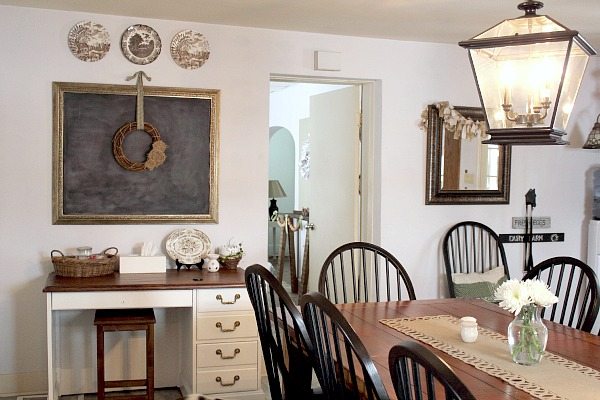 Most of all, I love the sense of pride and wonder that we get from owning our own little piece of local history and being in charge of its care and restoration. And it doesn’t hurt that we seem to get a ton of compliments on our cute house no matter what state of semi-disrepair it’s in!

What about you? Have you ever dreamed of bringing an old house back to life?

Don’t forget to visit my most recent home tour if you’re feeling in need of some pretty pictures to look at after all of this old house messiness!