I thought it was time for a little update on our front porch progress. Here’s where we’re at and what we’ve been up to!

I mentioned a few times that our big project for this summer was adding a front porch onto our house. If you follow along with me on Instagram, particularly on Instagram stories, then you’re probably pretty familiar with this project because I basically haven’t stopped talking about it. It’s a good one, if I do say so myself! 🙂 Our house previously just had a little cement stoop in front of the front door and a little overhang and that was it. The stoop really wasn’t even big enough for more than one person to stand on it at a time, so we basically never used the front door. What’s an old farmhouse without a nice, welcoming front porch? It was just wrong, so this year we’ve been working on making it right! Since we’re getting pretty close to wrapping this project up, I thought it was time for a little porch progress update to get you up to speed.

The Scary Before Photos

When I look at these photos now, I almost can’t believe this was our house. Adding this front porch on did exactly what I hoped it would. It’s changed the whole look and feel of our house. It’s so much friendlier-looking now than it used to be. 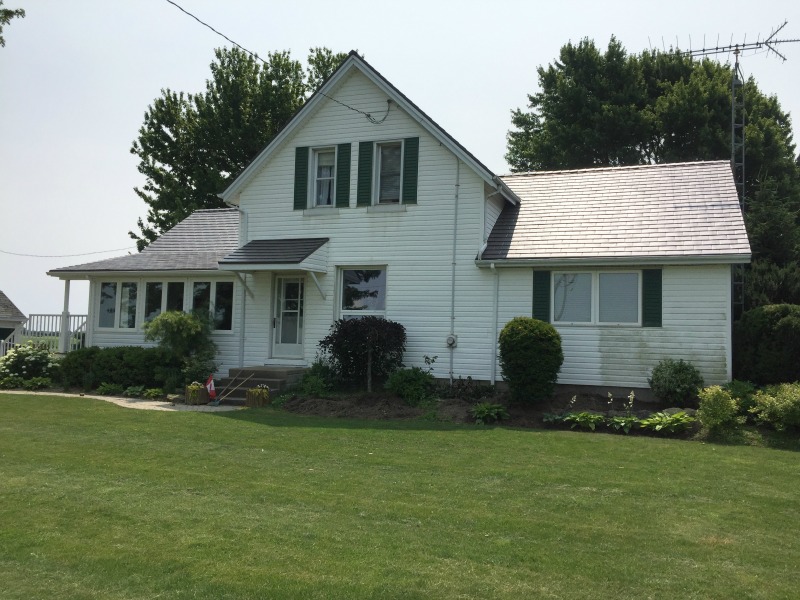 Pretty terrifying, right? You can see on the left side of the house that everything is all neat and tidy. That’s the new mudroom and the side porch that we built last year. Everything to the right of that though was pretty awful at the beginning of summer this year. We had just ripped a few hedges out and were preparing to move some landscaping around, so that stained siding that we revealed really didn’t help things either. 🙂 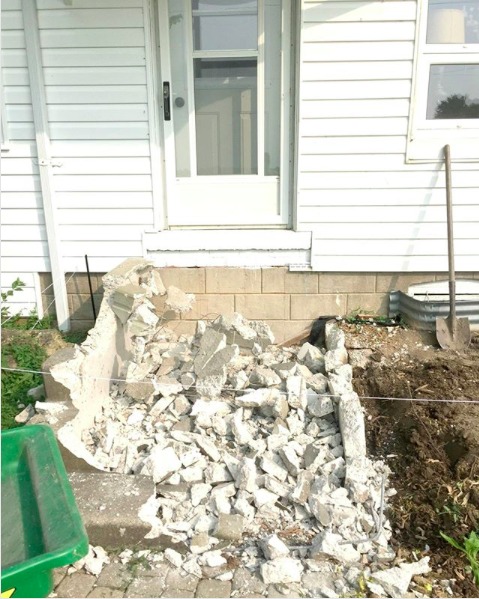 I think this is my favourite of the “before” photos for this project. This was right after we smashed the old cement front steps. So satisfying. 🙂 I don’t usually think of myself as a “Demo Day” type of girl, but this was fun!

And then it was on to building the porch!

The Reality of Building a Front Porch 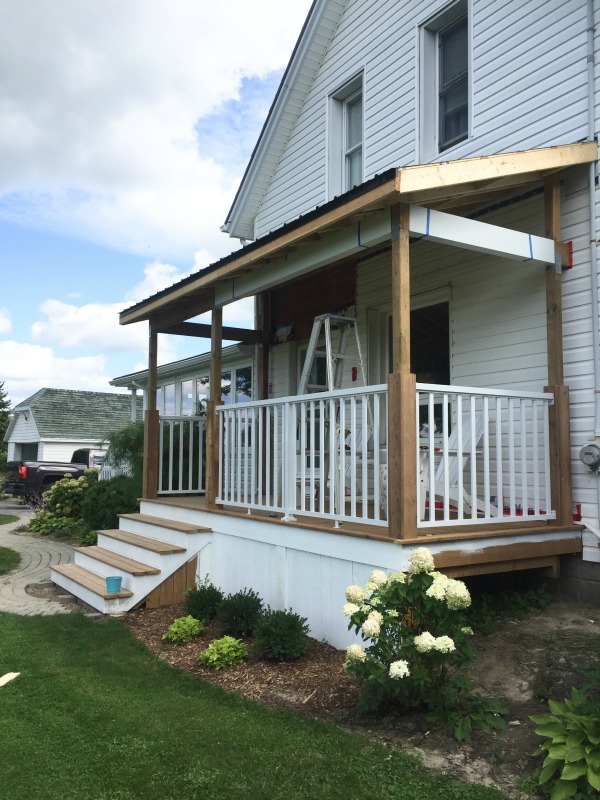 Building a front porch may not seem much more difficult than your usual backyard deck project, but let me tell you: It’s all those little details that go into making a front porch really welcoming that really get ya! 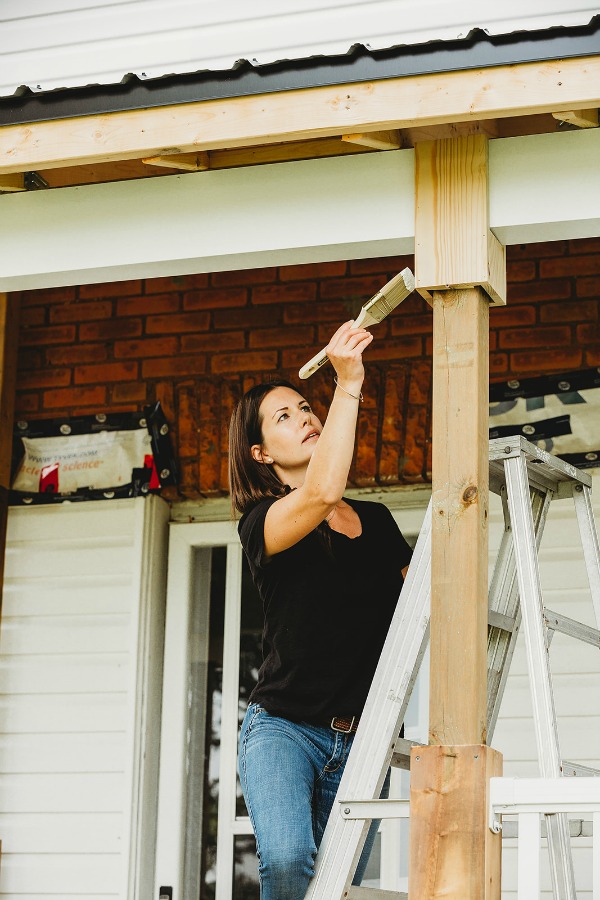 Since this is a front entrance, we really wanted to make sure that every last detail was perfect. The actual building of the structure, as in the building of the deck and the roof part, came together really quickly, but it’s all that trim work and those finishing touches that have really turned this into a huge project. It didn’t seem like such a big undertaking at first, but taking this porch from “OK” to what we really want it to be is what we’re working on now. It’s slow-going but also so fun to see our vision really take shape.

The types of things that take a little extra time are things like finishing the underside of the roof instead of just leaving it exposed, wrapping the posts and adding trim to make them look a little more grand, wrapping the beams in custom aluminum so they look extra sharp and also so we don’t have to paint them every year, and trimming out the window and door. All of these things make a big difference in the overall impression that the front porch creates, but when you start to think about it, they result in adding thousands of extra measurements and cuts that need to be added on to the project. 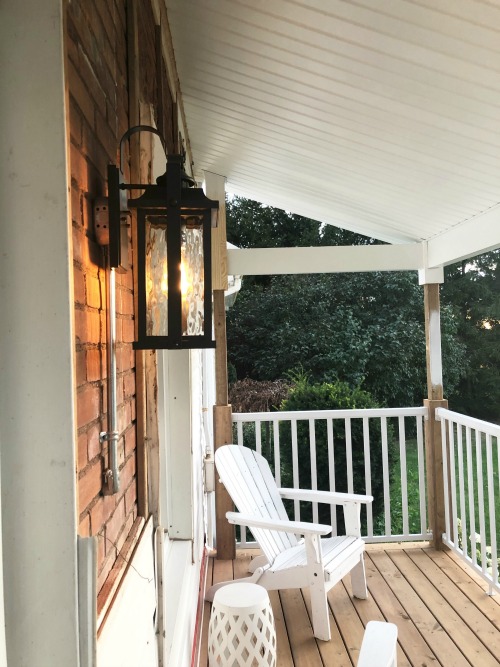 It’s all the little details that really make it for me though and I can’t wait to sit out here and admire them with a cup tea on a chilly fall day when the leaves start to really show off their colors. 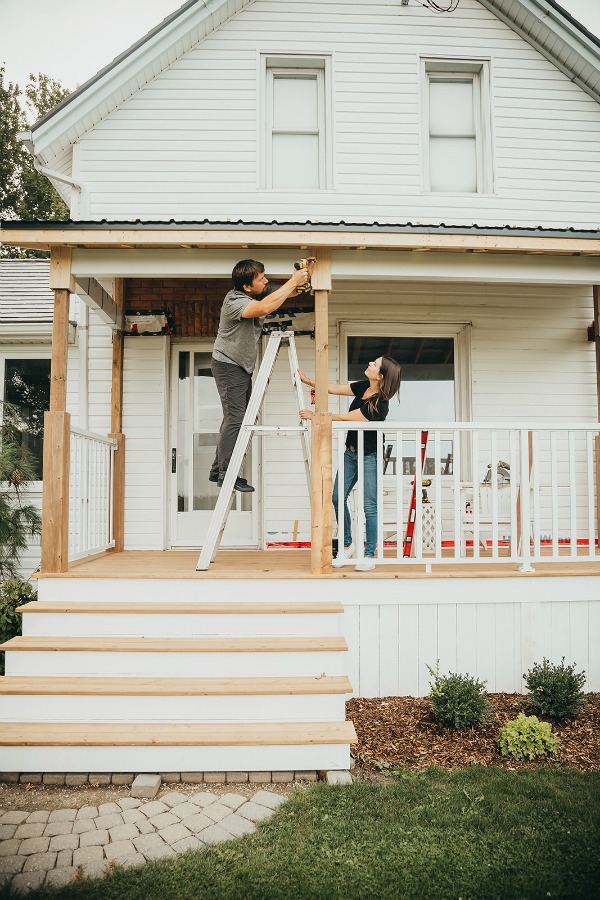 So the next steps in our porch progress journey will be some really fun ones. The front door is of course the focal point of the porch when you walk up the steps, and instead of just replacing it with a new one, we’ve decided to make things a little more… interesting. 🙂 We decided to use our creativity and see if we could take our regular, boring front door and make some clever changes to it so that it will be really worthy of this new front porch. Be on the lookout for a post detailing that project soon!

So that’s where we’re at with the porch right now and where we’re going! Obviously I can’t wait to have it done so I can dress it all up and show it off!