Our back stairwell has definitely been the scariest part of our house ever since we moved in and now we’re finally tackling it! In today’s post I’ll share what it looks like right now and what our plans are for our remodel!

The “before” shots of this space are really just unbelievable. I can’t wait to look back on them when this part of our home is all fresh and new and clean and say “Wow! I can’t believe it used to look that creepy back there!” We have a ceiling that’s caving in from a roof that used to leak profusely before we replaced it, really banged up bright blue walls, and just a whole lot of mess. This area has always been the most in need of attention, but it has also always had a door to it that could be shut, so we could ignore it whenever necessary. Aside from the way this space looks though, it really does have some positive points, like the fact that the stairs are really wide and narrow and that there’s a ton of storage potential hiding behind these walls. So let me show you around!

The Back Stairwell “Before” 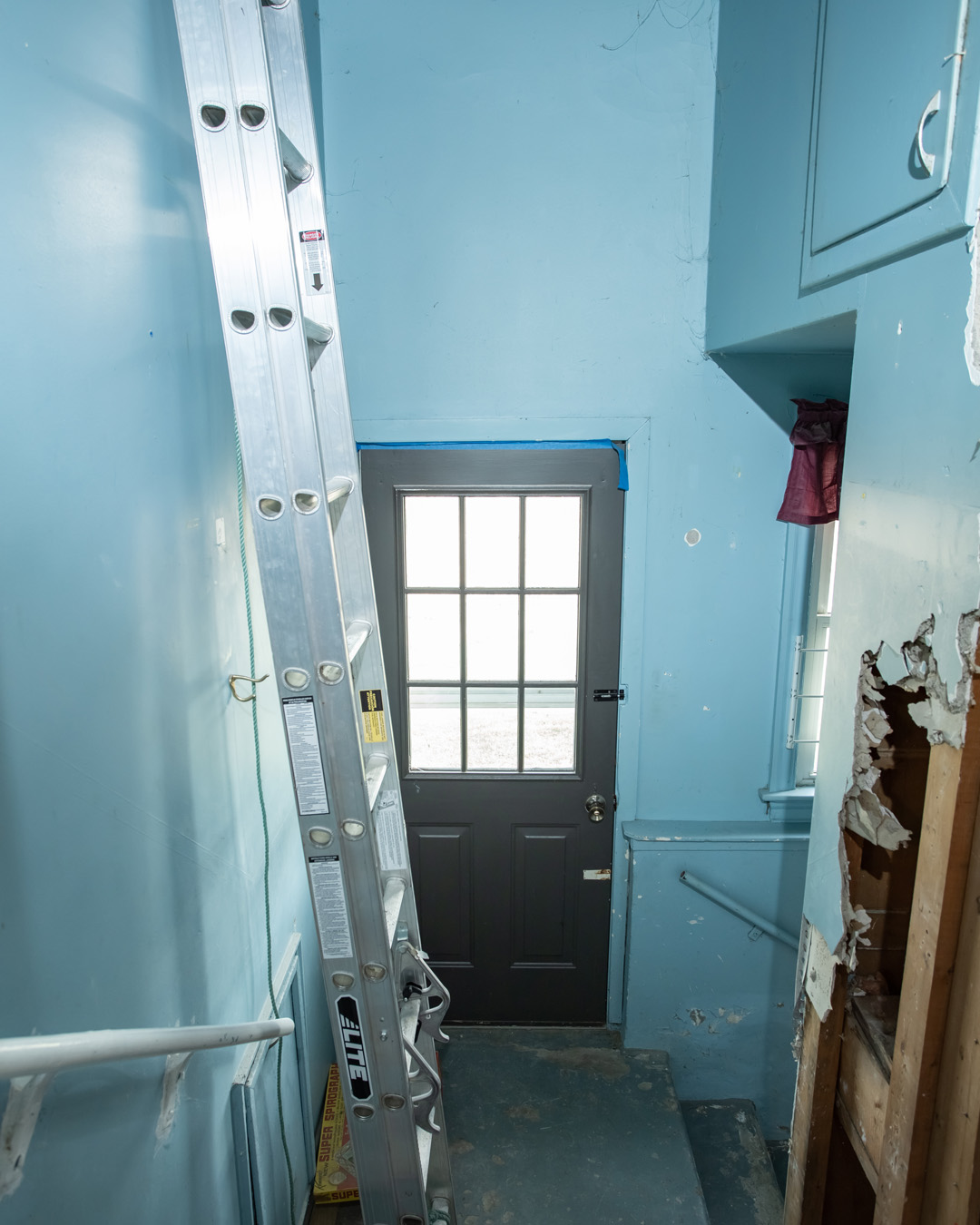 Well, here it is. It’s really just as bad as I say it is, and maybe even a little worse. The dust-encrusted 1990s valance hanging over the window back here really doesn’t help at all, does it? It’s pretty funny at this point. I took down all the old window coverings right away when we moved in, but left this one up because it’s kind of hard to reach and also because I thought we’d be fixing this area up fairly soon anyway. Of course, that was almost 10 years ago now. 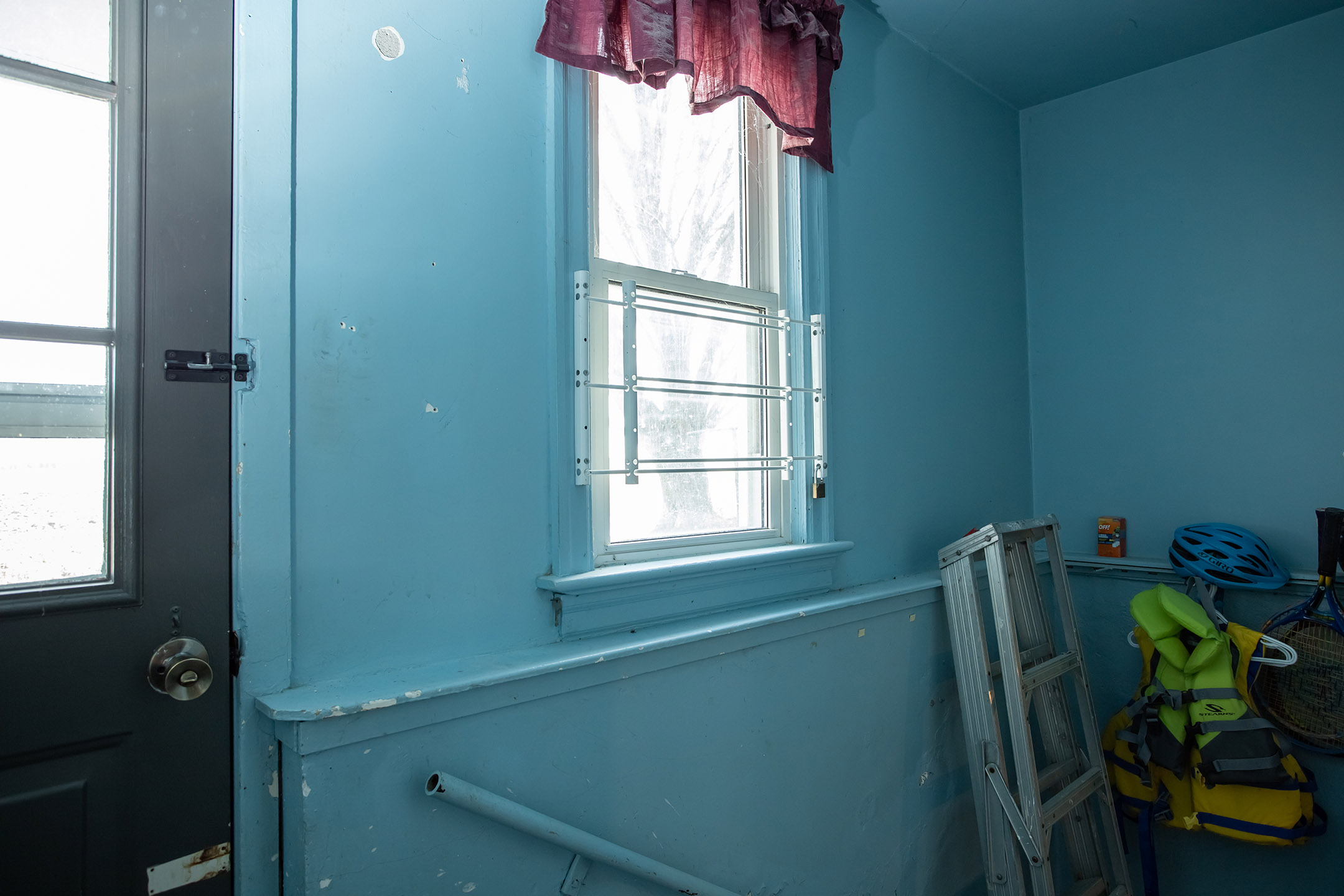 I’m actually kind of glad that we’re only getting to this area now though, because we’ve come up with some good ideas for how to use the space that I don’t think we would have thought of back in the day.

Currently we have yucky walls, a yucky ceiling, a yucky door, a yucky window, yucky stairs, and some fairly unfunctional storage options. You could say that it just isn’t working for us. Can you even believe we’ve been living like this? Ha! 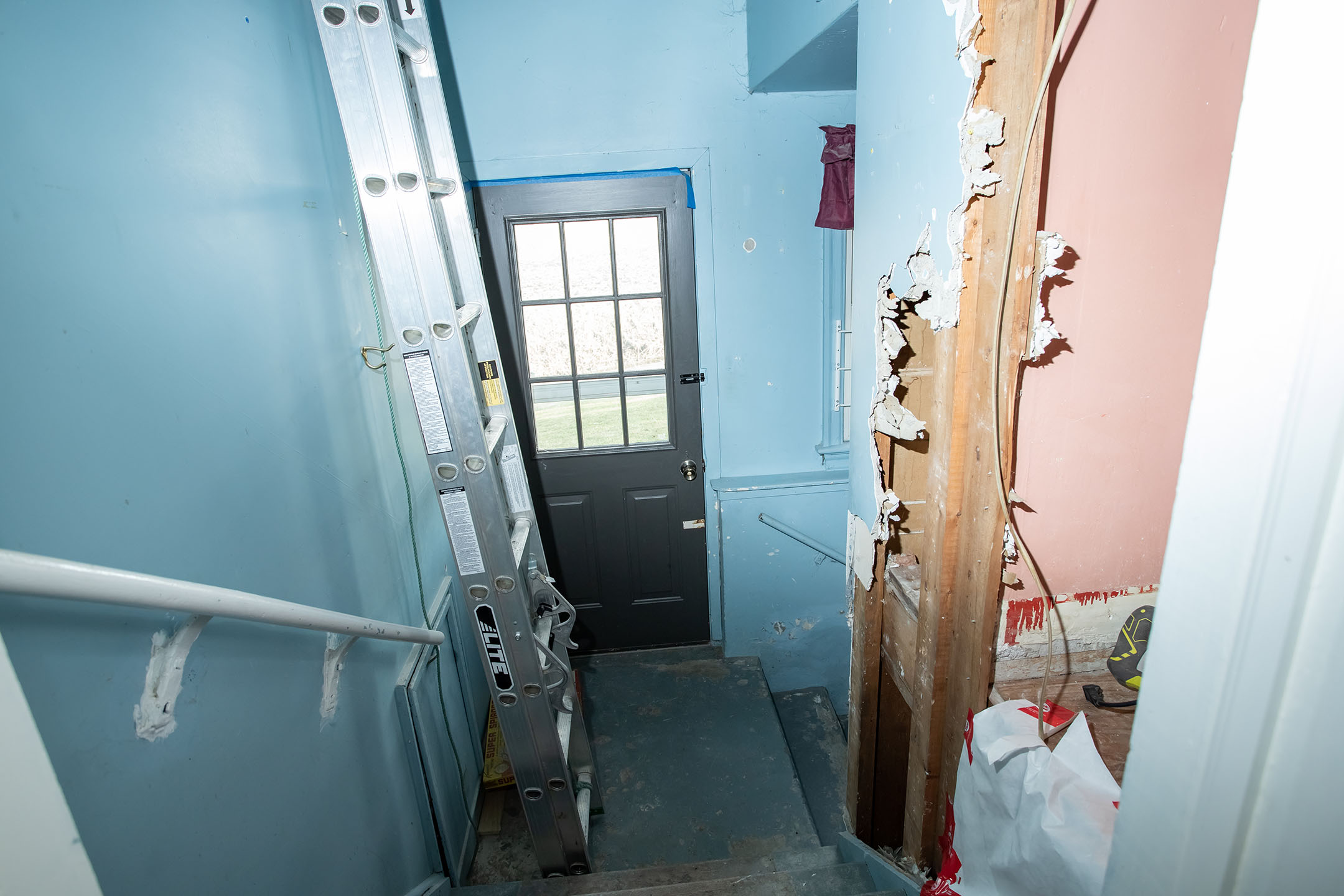 We have plans though!

Plans for the Back Stairwell Remodel

My main priorities for this space are to include more storage, and bring more light into the space, and therefore into the kitchen as well, to a certain extent.

There’s a big open space behind the walls to the right of the two sets of stairs so our main goal is to first build some cabinets into those walls. Old houses like ours often lack a lot of things like broom closets and pantries, so these cabinets will serve those purposes. Because this area is right off the back of the kitchen, it will be the perfect location.

These stairs lead out to the backyard and down to the basement, and we’re hoping that if we fix this space up, we’ll actually use this back door to get outside, rather than going all the way around through the mudroom like we usually do now.

Because this part of the first addition added onto our house about 90 years ago, the walls are all wood construction rather than brick and that makes it really easy to get more light back here. We’ll be switching out the door to be the same style as the door we have in the mudroom, which is basically a window. Then we’ll be removing the rickety old overhang outside and replacing it with a window that will be directly over the door. The window that you can see to the right of this door is actually our laundry room. We’re ordered a new window for that room two, so from the outside we’ll have two matching windows, side-by-side, eventually. 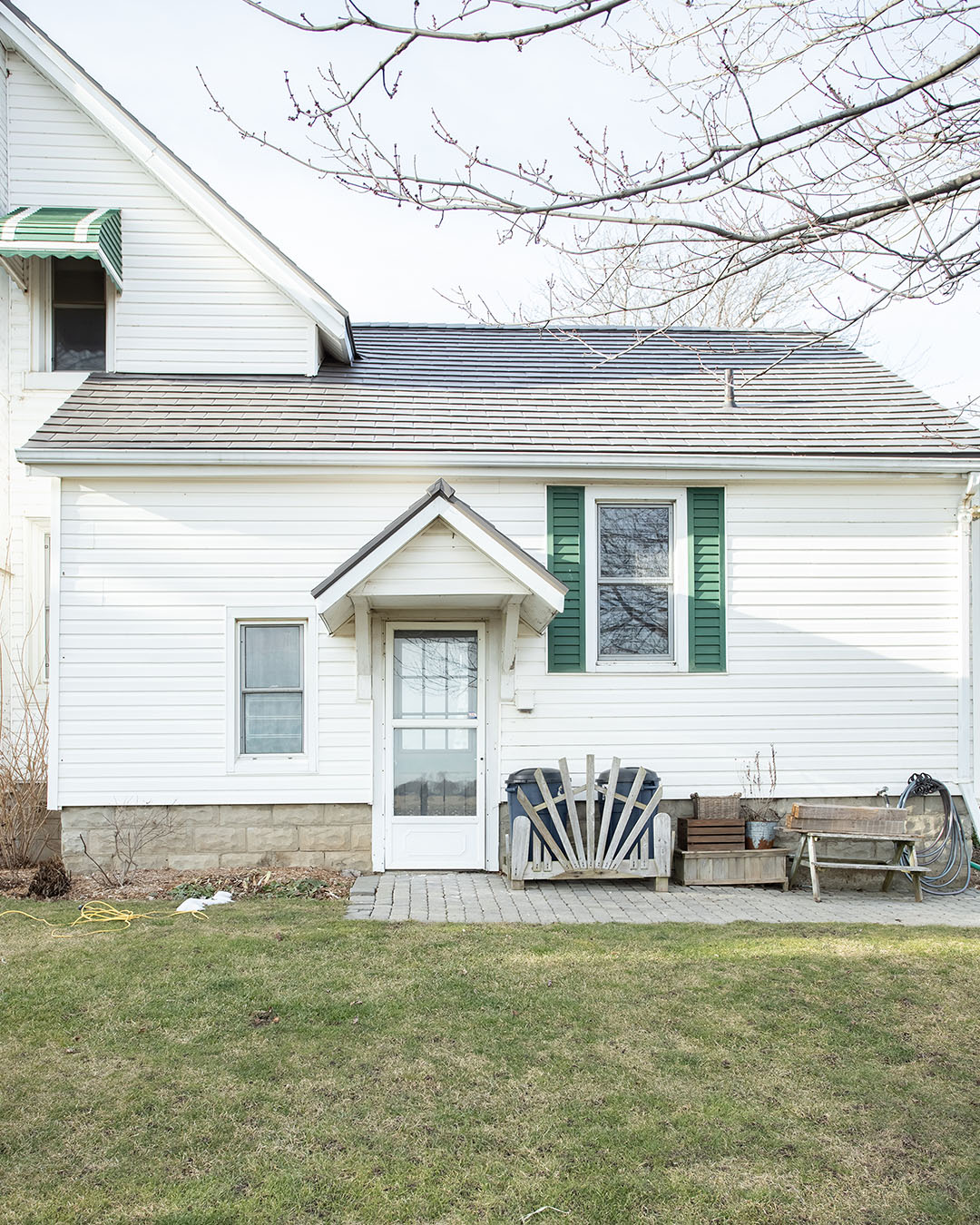 On the wall next to the door, we currently have one window, but we’re going to remove that and replace it with two. So this whole wall will be windows. I had the brilliant (if I do say so myself) idea to increase the depth of this little ledge that runs under the window so that I’ll have a nice sunny spot to put all my plants! Really excited about that little feature. 🙂

As far as a design direction goes, I don’t have everything 100% nailed down yet. It will be a light, bright space, with a lot of white paint, but I’m not sure about the finishes yet. I’m thinking simple matte black, oil/rubbed bronze hardware on the cabinets like we did in our other back hall mudroom area, and then maybe some brass for the light fixtures for some sparkle. Chris also likes the idea of maybe doing a tile on the walls around the lower stairwell area, I’m just not sure what kind of tile I think would work for that application, so I’ll have to ponder that one a bit more. And then there’s the stairs themselves! Do I paint those white as well? Install some kind of stained wood over them? Paint them a darker color? So many options for this tiny little space. 🙂

I’ve been putting together a little collage of inspiration images as I come across them and here’s what I have so far. 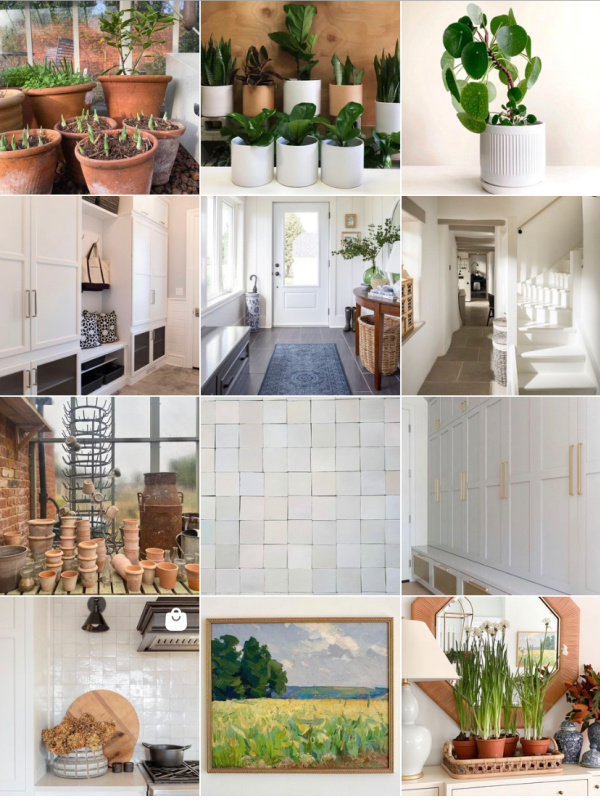 So that’s what we’re going to be up to when we find ourselves with little pockets of time here and there! Really looking forward to seeing some progress with this one!