Since I’ve been talking so much about my new all-weather Adirondack chairs, I thought a full, formal review was definitely in order today.

We’ve had a pair of beloved white wood Adirondack chairs for quite a few years now and I just love them. They’re comfortable, look great anywhere, and are just a classic type of outdoor furniture that I can never get bored of. We had them on our front porch last year and got quite a bit of use out of them, but at some point last year, I noticed one of them was starting to crack and rot a bit from years of being outside and exposed on the lawn before we built the porch. I started putting some thought into purchasing some new all-weather Adirondack chairs so that I wouldn’t run into this issue again. And put some thought in I did. For almost a year I researched and pondered different styles and brands of white chairs until finally I landed on these. Today I’ll share my thoughts on different aspects of the quality of different white Adirondack chairs, as well as the style features that, in my opinion, make all the difference. Looks definitely matter when it comes to something that’s going to be living on your front porch for years and years to come. 🙂 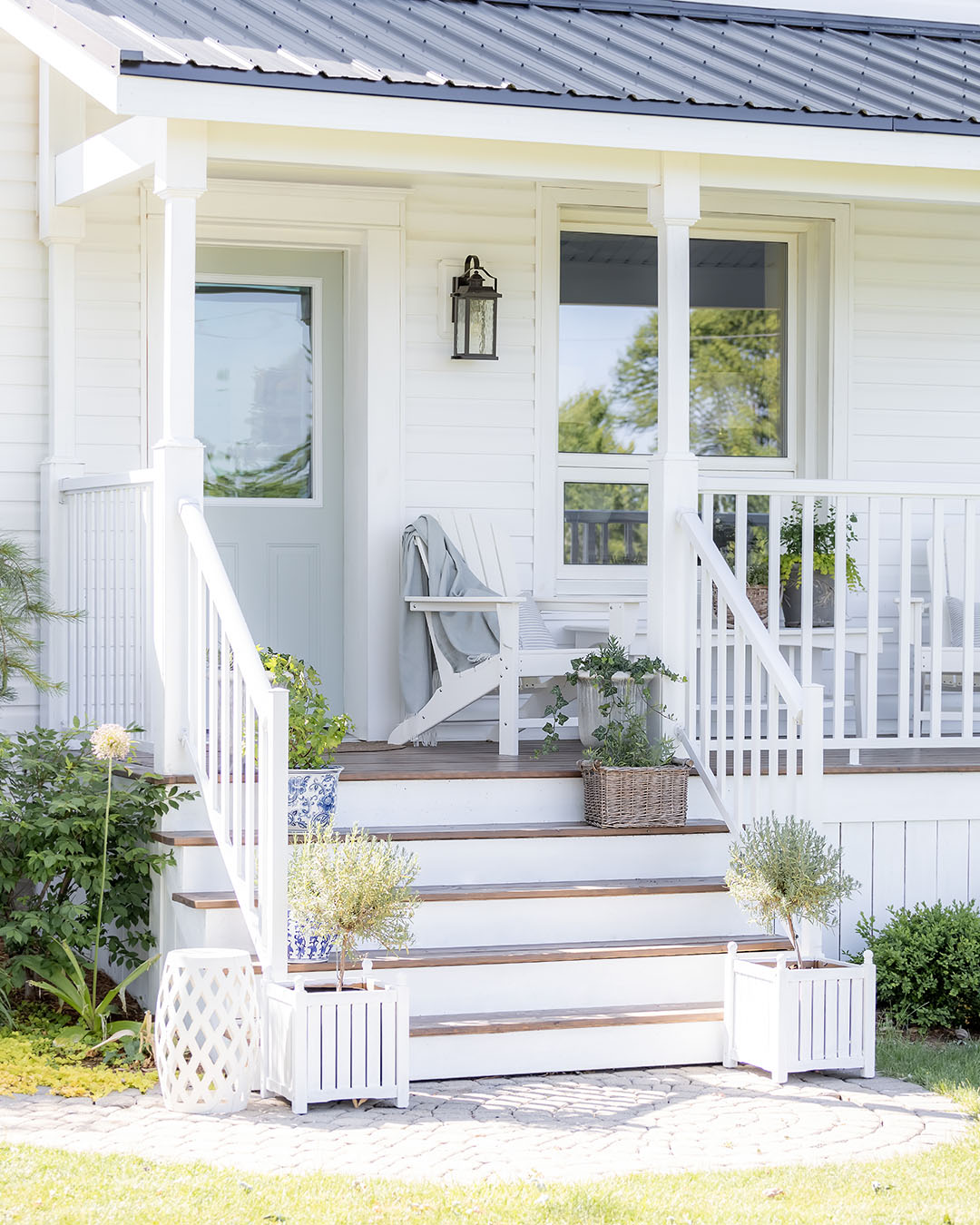 The All-Weather Adirondack Chairs That I Finally Chose

So, I know myself, and if there’s something I have in my mind, I’m usually not satisfied until I get the real deal. With that in mind, I knew that I should probably look into getting the all-weather chairs that I originally fell in love with a few years ago, and that made me know that I wanted to replace our wood chairs with the all-weather version. The original chairs that caught my eye were from CR Plastics, which is an Ontario company. I then discovered that we had an even more local company Polyboard Design making very similar, super high-quality chairs, so I thought they’d be an option that I would have to look into as well, and probably go with. LLBean makes beautiful all-weather Adirondack chairs as well, and they’re always a trusted brand for us, so I probably might have ended up going with those, but they don’t ship their patio furniture to Canada yet, so that wasn’t an option for us. 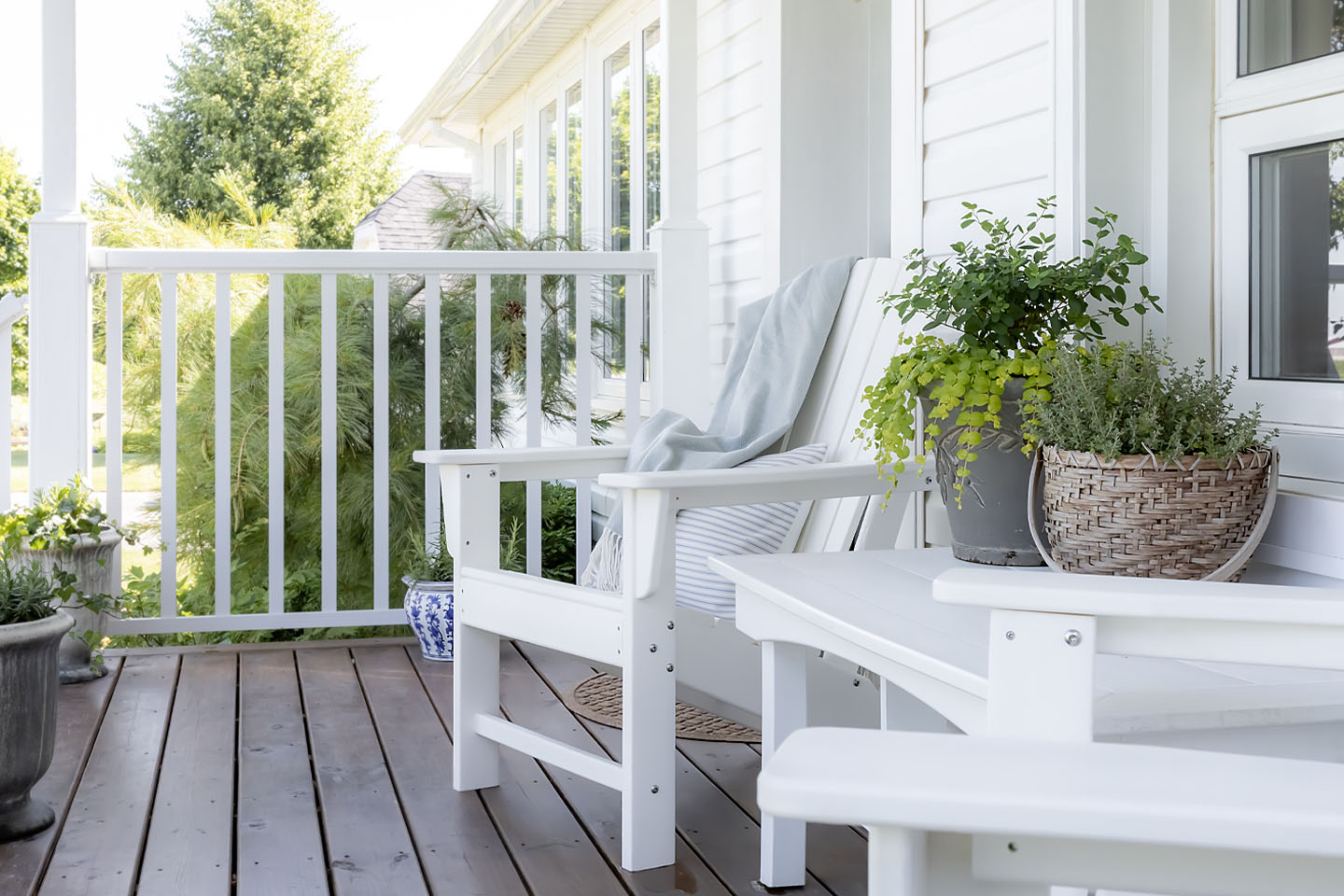 In the end, I actually went with none of those options and honestly, it kind of came down to price, and of course availability. I researched many many different options online, as well as those two local options and I found some that were much more expensive, and a few that were quite a bit less expensive. I was a bit worried that if I spent close to $1000 on two plastic chairs, that I would basically never hear the end of it from Chris. Ha!

So the chairs that I ended up choosing were from Wayfair. They ended up being some of the least expensive chairs that I came across, but they looked like they fit really well into the classic look I was going for and they had hundreds of amazing reviews. When people are saying things like “These chairs are perfect.” You can feel pretty confident in at least giving them a try. 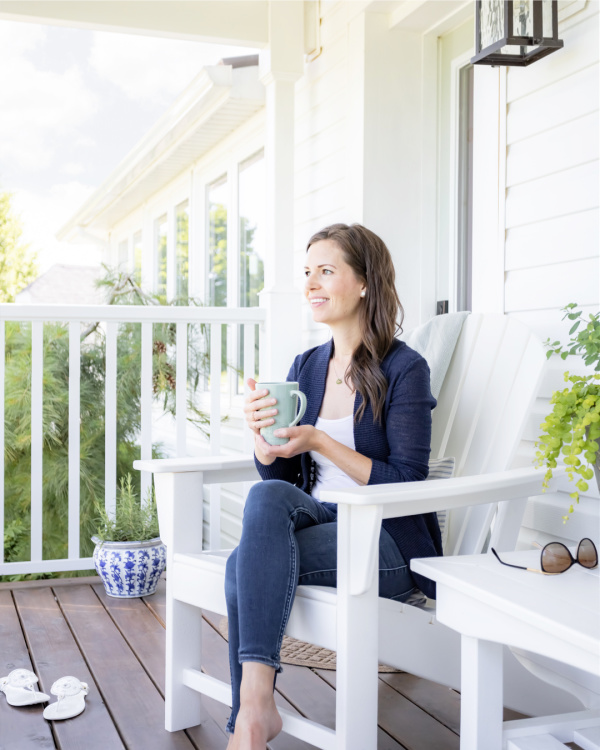 There are so many different styles of chair that come up when you search for white Adirondack chairs. The main differences are in the shape of the back of the chairs (flat vs. rounded), the curve at the top of the back of the chair (a smooth curve, flat, or “stepped” boards), and the number of boards in the back of the chair. There are a lot of modern versions right now that are really popular and they typically have fewer boards on the back and a flat top. I have to admit that those caught my eye, but I knew that in the long term, the more classic the style of the chair, the better. At least for me.

If you’re looking for a chair that’s really inexpensive, most of the options that are available have fewer boards on the back, but I found that when I compared, chairs with more boards always looked better. They were more classic and just looked less cheap. Ideally, if you want chairs that look as classic as mine do, count the boards on the chairs you’re buying and make sure that there are 6-7 boards on the back of the chair. 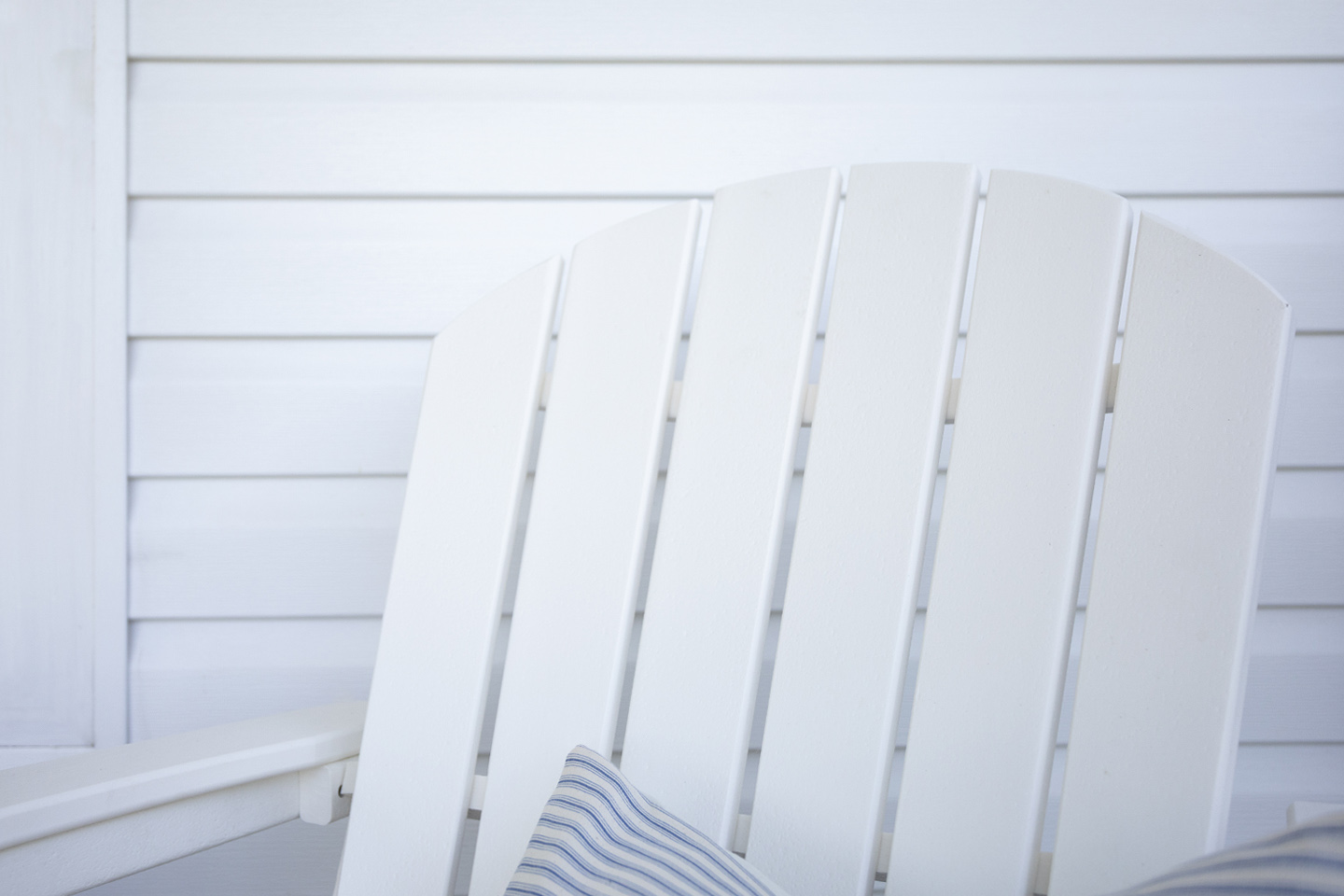 The other option available is a built-in cupholder. While this seems like an upgrade and a nice added feature, it actually really takes away from the look of the chairs, in my opinion and is also totally unnecessary. Adirondack chairs have flat arm rests and therefore already have their own little built-in tables for your cool summer drink.

I should also note that these chairs do have exposed, stainless steel coloured hardware. Our last chairs had painted fasteners and it does make a bit of a difference in appearance. Chris was satisfied with the quality of the fasteners, which he’s pretty picky about, as well as they fact that they’re stainless, though. The visible fasteners weren’t a deal breaker for us in the end. I think more expensive chairs would normally have color-matched fasteners, but we do have the ability to remove them from sight in photos if they’re really bugging us, so that helped with our decision too. 🙂 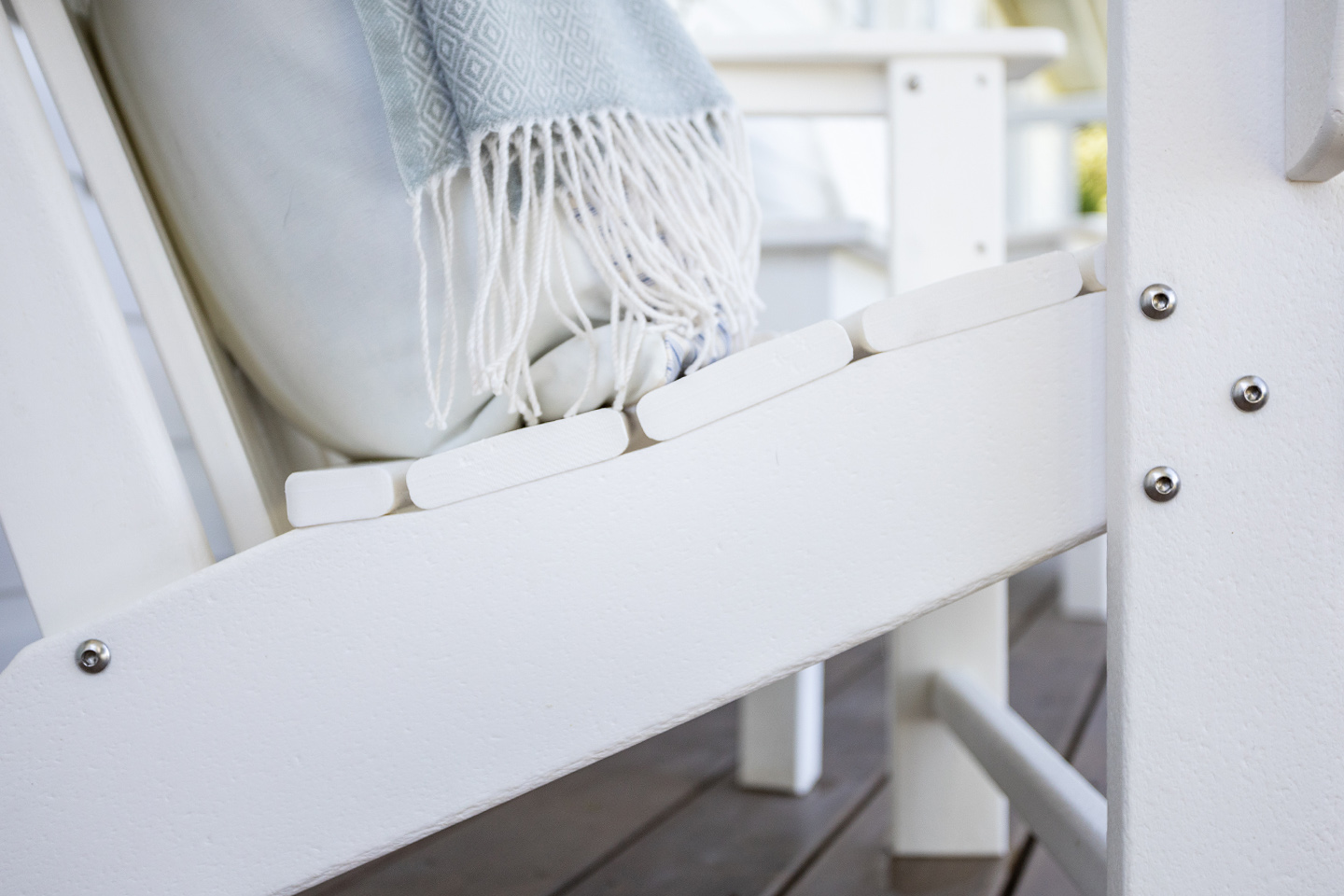 How These Chairs Are Working Out For Us

These chairs are a good deal, there’s no doubt about that, so we definitely had a bit of a “you get what you pay for” kind of moment when we were putting them together. The sent us two of the same side for the front leg/arm support, which could have been a bit of a hassle if we didn’t have tools available and someone who was confident that he could take it apart, drill a new hole in exactly the right spot, and put it back together in the right configuration so it would fit on the other side of the chair. That someone was Chris, of course. That whole fixing process only took about 10 minutes, but of course we have one extra unnecessary hole drilled in one of the legs. It’s not noticeable at all, but of course it will kind of be bugging Chris until the end of time. So there’s that.

Shipping for these chairs was as-expected and they took about two weeks to arrive, which was fine. The chairs arrived undamaged and the packaging wasn’t too excessive at all, but there was a bit of bubble wrap inside the box to keep the chair protected and unscratched. 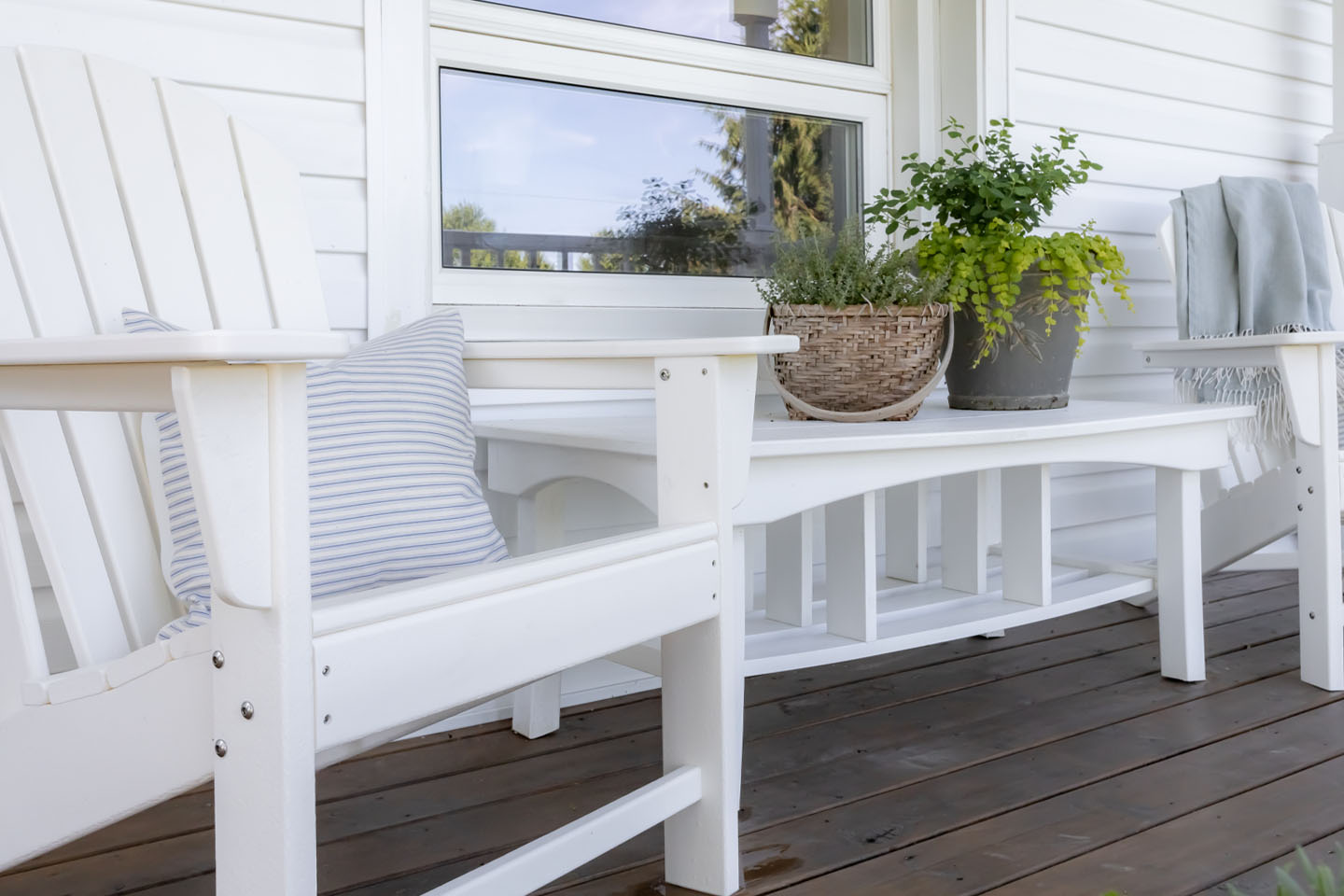 Where these chairs really shine is in how comfortable they are, which is of course really what matters. They have a really nice smooth surface that’s slightly texturized for visual appeal, but doesn’t catch on anything or collect dirt. They have a nice, wide back, but also they sit slightly more upright than our old chairs. I’ve heard a lot of people complain about how hard Adirondack chairs can be to get out of, so I think this is a feature than is probably widely-appreciated about these chairs. You could comfortably sit in them for hours, but it won’t be because you’re stuck and you can’t get out. Ha!

All in all, I’m super happy with my purchase. These chairs are exactly what I was hoping for and I love the way they look every time I walk out on this porch. I’m looking forward to many hours of porch sitting this summer if we can manage to squeeze it in!

Have you tried any of these all-weather Adirondack chairs? How did you like them?