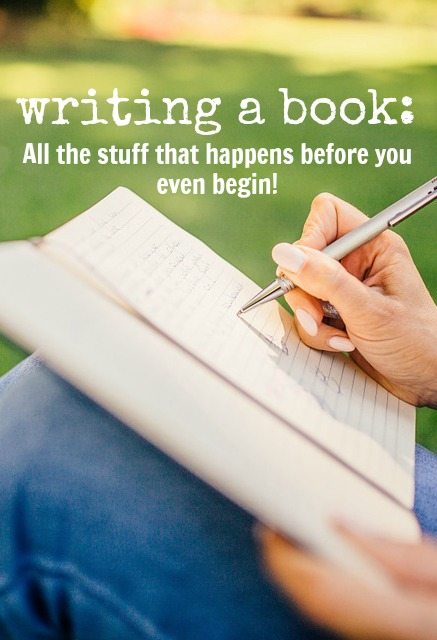 I shared with you a few weeks ago that I’m working on a book that’s due out early next year, and I thought it would be fun to share some of the ups and downs of the process with you along the way. It really is kind of a long and twisty road to get from the start to the finish of the book-writing experience and I’m learning so much along the way. There have also been quite a few surprises and some pretty good little stories too, so whether you’re thinking of writing a book, or whether you just want the chance to peek in at what it’s like, this is your chance!

One of the first things that I found really surprising about the whole book-writing thing is just how much back-and-forthing goes on before the book-writing can even really begin! Well, it may be a little different for every author, because of course there are those that write the book first and then “shop” it around to different publishers. In my case, the publisher reached out to me to see if writing a book would be something that I would be interested in, and we started building the concept for the book from there.

When the editor at the publisher first emailed me, of course I was excited and felt pretty honored that she/they had read my blog and felt that my writing style and what I wrote about would be fitting for an actual real, live book. We scheduled a time to chat on the phone about the book idea a little bit more, and my impression was honestly that she would be kind of trying to sell me on the idea of writing a book for them and letting me know what that would entail and it would just be up to me to either say “yes” or “no”.

The first call was almost like an interview for me, which in retrospect makes sense, because they want to be sure I’m an actual person, with an actual passion for what I’m going to write about. They wanted to know a little bit about my story and my background, and if I had any other interests besides the main subject for the book, and of course what made me so interested in writing a book on this subject, which was homekeeping/cleaning tips.  I was really surprised though, as I thought that I would mostly be listening rather than talking on this call, so I kind of had to gather my thoughts quickly on the spot and then “sell” myself a little bit. I didn’t think I’d have to do much talking or “selling myself” because they really have access to a huge amount of my writing on my blog, and I just kind of thought that would speak for itself. Nope! 🙂

There was a second call about a week or so later where we were supposed to talk about some ideas for concepts and things like that, and by that time I knew a little more about what to expect, so I came prepared! I came up with a few different ideas for the book and got myself ready to talk about my general vision for what type of book I would want it to be and how I would want it to look and feel. I still felt like I really had to sell myself on that second call, maybe even more so than on the first call, but it was much easier when I knew that I was the one who would be doing most of the talking, job interview-style.

So we landed on a concept pretty quickly and they asked me to send them a list of the chapters that I wanted to include in the book, along with the introductions to each of those chapters as it would appear in the book, and 1-2 fully-written chapters for them to look over. They needed all of that within a week or so and then they would look it over and make their final decision as to whether or not they really wanted to have me write this book for them. Basically I wrote a really big chunk of the book and came up with most of my ideas for how the book would come together within about a week. That sounded like a nearly impossible feat at first, but it was really amazingly easy! I loved seeing a whole book kind of materialize in front of my eyes within a few days.

So, fast forward a few more weeks and they decided that we were good to go with the book! They told me they’d be sending me a contract and I could start writing the whole book from start to finish and I could turn it in at the end of March. Just like that! “OK, Courtenay, you’re an author now. Go write a whole book! Have fun!”

One of the main things that I learned about the whole book-writing process during those pre-contract-signing days was that the book writing process is S-L-O-W!! That’s definitely not how I normally roll, at all, but it’s actually something that I’ve come to appreciate because it allows you to create something really pretty special, without having to completely upset your whole life. You can do a little bit at a time, or a lot at a time and then have a few weeks off while you wait for a response from the publisher on a certain step in the process. I was really anxious about all of that waiting at first, but I’ve learned to love those breaks in the action. 🙂

So that’s how that part of the process looks! I had no idea that there was so much pre-work involved, so if you find yourself in a situation where you get to write a book sometime soon, I hope this will be helpful for you!

More about the next steps in the process coming soon! 🙂