So I knew that one of the final finishing touches that I wanted to put in Kennedy’s room was a really awesome, fun bed skirt. I wasn’t exactly sure how I was going to go about making one, or what it was necessarily going to look like, but I knew it had to be awesome. What I came up with is something I totally love, and I’m so happy that it wasn’t nearly as fancy of a project as the end result would imply.

I started out by contacting my friends at Online Fabric Store and choosing some fabrics that I knew would look fun, and fresh, and trendy, and just perfect for this tweeny room.

I ended up going with these: 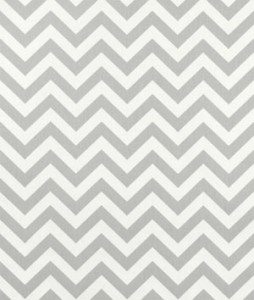 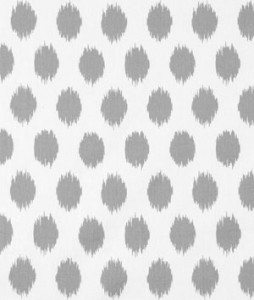 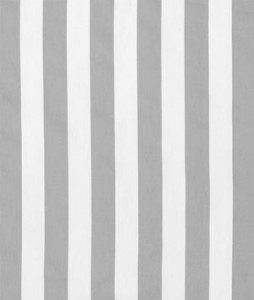 I also wrote a post about covering up the old box spring in a cute fabric a few weeks ago. For that I used this one: 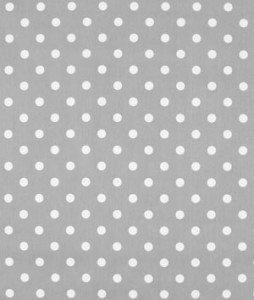 Once I had my fabric all ready to go, I started out by measuring how far the floor is from the bottom of the bed, dividing that by three (for three fabric layers), and then adding about a 2 inches to each number to allow for seams and for a bit of overlap. I didn’t worry about being too exact, but I wanted them to be around the right size. Then I ripped about a million strips of each fabric to be that width. 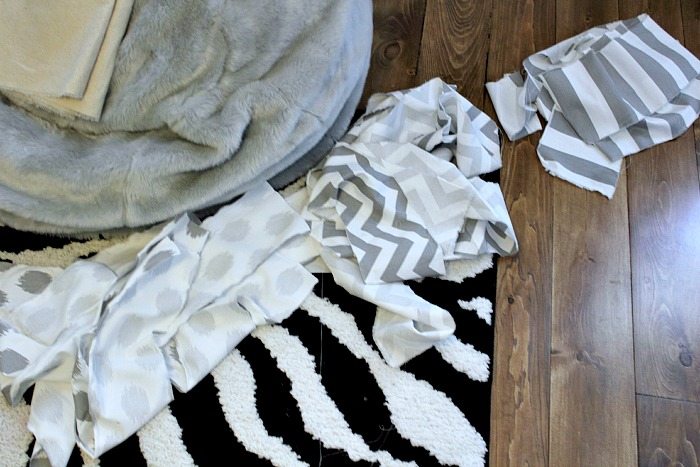 OK, not a million, more like 6. But it looked like a million when I was sitting in the middle of all the piles!

I laid the fabric strips down and decided how I wanted to put them next. 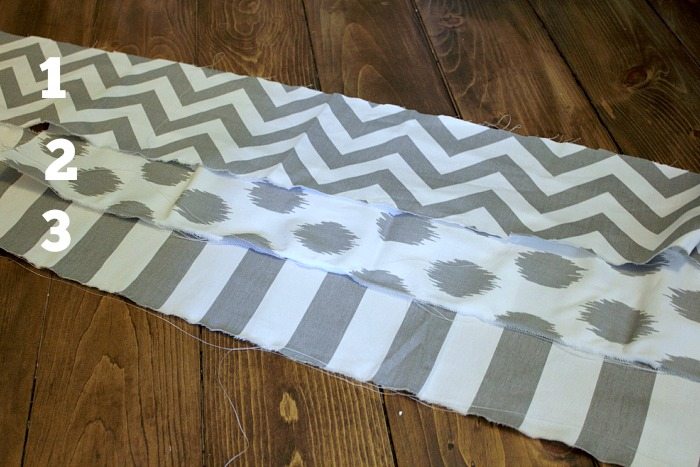 I ironed each strip and folded over a seam that was about 3/4 of an inch wide for each. Then I sewed those seams in place.

Next, I became reunited with my old friend the glue gun. It was a glorious day!

I was going to use velcro strips for this step, but I didn’t have any on hand the day when the inspiration to work on this project struck, so I just went for the glue gun. I’m so glad I did! Realistically, I know I’ll probably replace this bedskirt before I actually take it out and throw it in the laundry, so glue was the way to go!

I took some wide strips of some scrap drop cloth that I had laying around and glued those to the bottom of the bed to act as the secret “base” to the bed skirt. 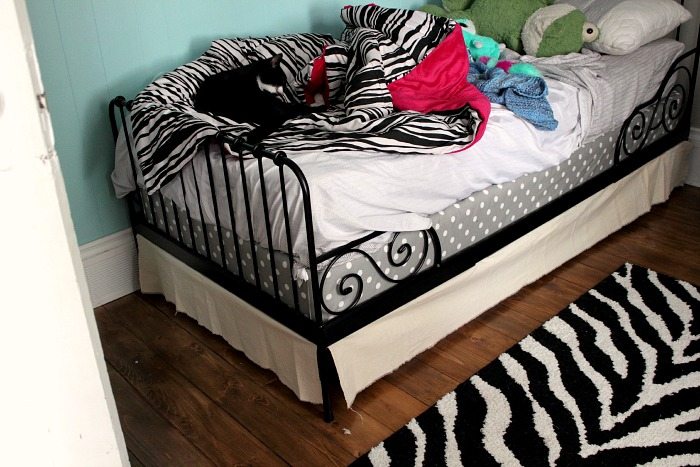 At this point, I realized that I probably could have just stuck some wide strips of a nice patterned fabric on there and that would have been good enough for a bed skirt, but it was too late! I was in too deep!

I also realized that I didn’t have the heart to disturb the kitty’s nap to make the bed for this picture, so I didn’t. 🙂

I had originally wanted to make this a ruffly bed skirt. I took one of the strips of fabric and hand-sewed some big, one inch stitches in it, then I pulled the thread tight to make it ruffle up. 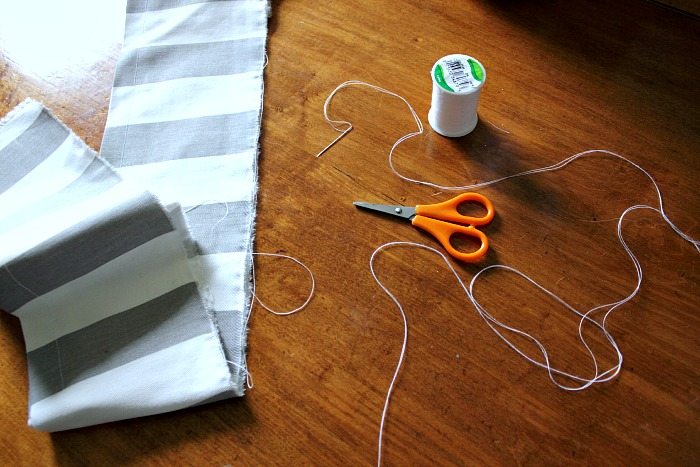 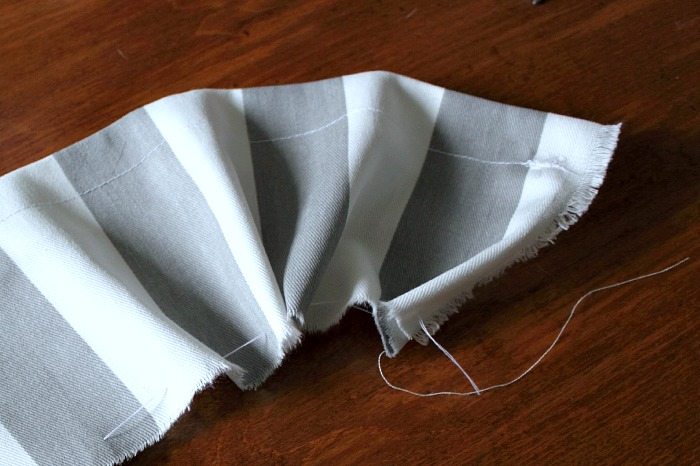 The thing is, when I brought this strip upstairs to hold it up to the bed and see how it would look, I quickly realized that this whole ruffle thing was going to be a little too frou frou for Kennedy. So basically half of all of those millions of strips of fabric that I’d ripped, and ironed, and sewn were totally not needed.

Oh well! You live you learn!

I just took my strips up to the bed, got out the hot glue gun and started sticking them right on to the base fabric that I’d already put up there. 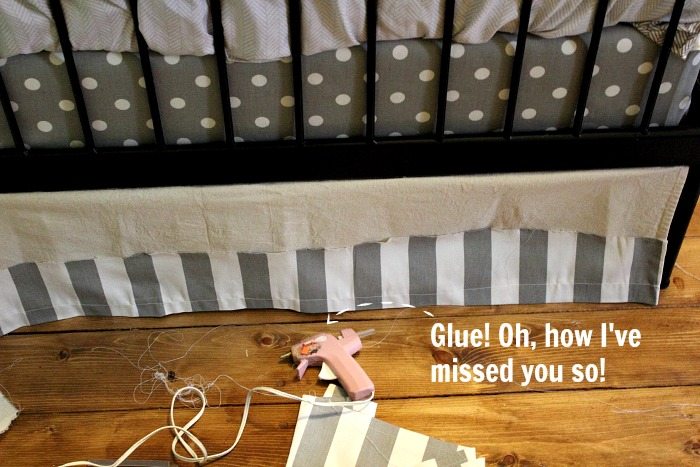 You can see that I really didn’t worry about how straight my fabric strips are. And now that the skirt is done, you’d never know! Well, YOU know, but only cause I just told you. 🙂

I just attached each fabric strip layer with a single line of glue at the top and let the layers hang down over one another. 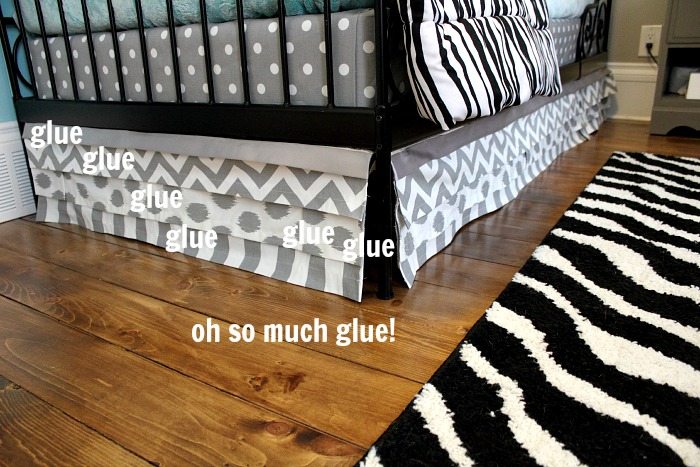 At the top, I finished it off with a nice wide satin ribbon.

The sneaky thing is, that since I sewed the seams on each fabric strip, it really looks like the whole thing was meticulously sewn together over hours and hours and hours. 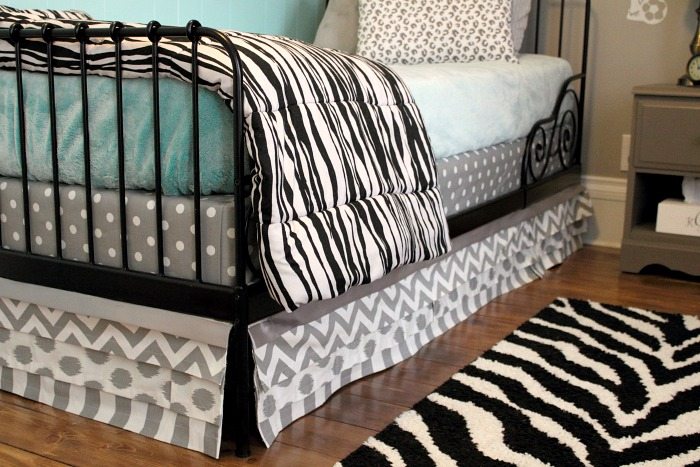 Of course, you and I know the truth.

And the truth is that I got my awesome bed skirt for Kennedy’s room and still had time to do fun things like eat and sleep. 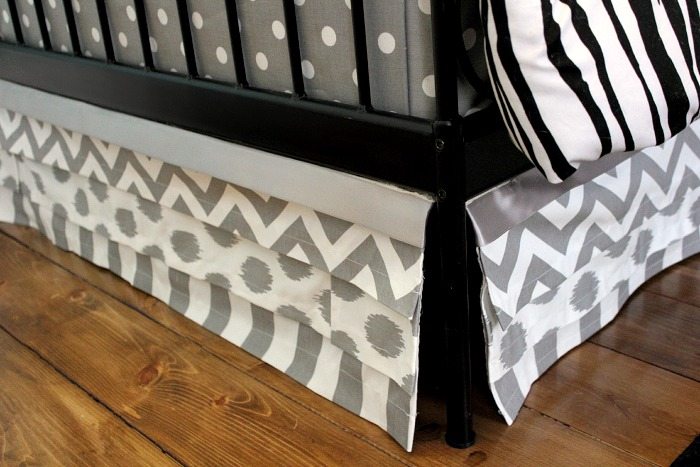 As for cleaning, I just vacuum it gently if I see any kitty furs stuck to it, but it’s not really a high-mess area, so this bed skirt getting dirty really isn’t a big issue. 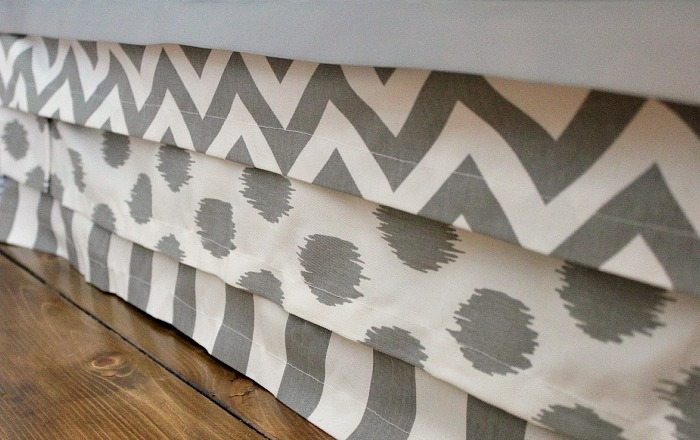 There are so many neat, creative ways to make a bed skirt out there and now here’s another one! Have you ever made your own bed skirt? How did it turn out?