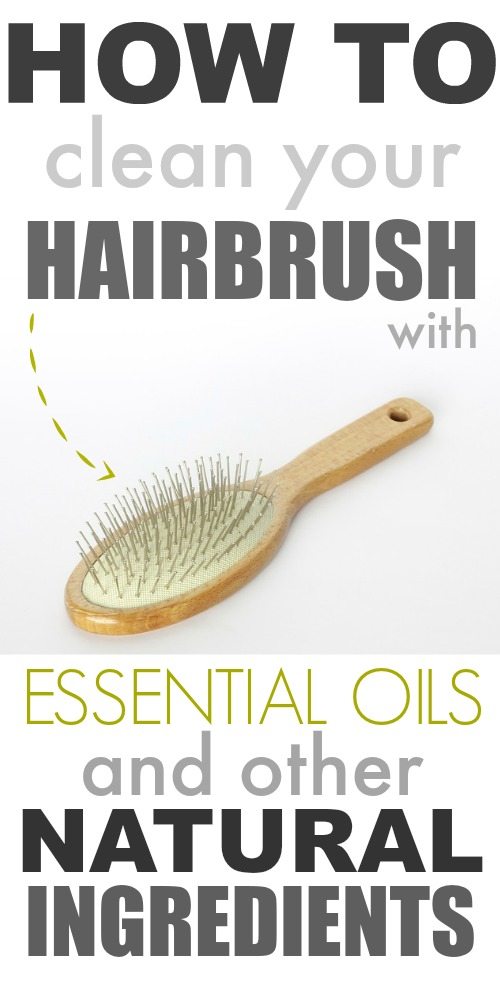 OK, so go ahead and call me weird, but I really get such a sense of satisfaction and accomplishment from little cleaning projects like this. This hairbrush cleaning project is something that only takes a few minutes, but gives you really great results. It’s one of those things where you can see the difference right before your eyes and that’s always kind of fun, isn’t it? OK, in this case, it’s a little gross too, but a fun kind of gross!

So here’s the hairbrush I was working on. This is Kennedy’s hairbrush that she’s probably had for about 8 years now and she refuses to use any other. She has this long, thick, wavy hair that just has a knack for getting itself tangled in knots and she’s always insisted that any other hairbrush just hurts her head. So I really have no choice but to keep cleaning this magical brush and hope it lasts us at least another 8 years! 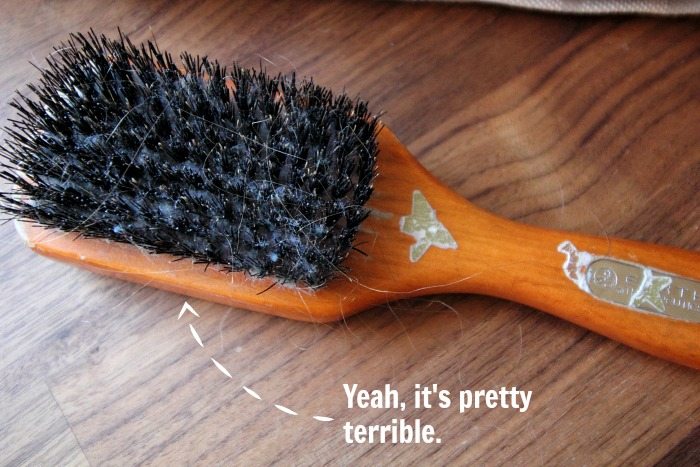 I clean the brush out quickly after each use, but of course there’s a lot of stuff that gets stuck deep down in there that needs a little extra help. As you can tell, she has a fluffy light blue blanket and the fuzz from that always seems to end up in the hairbrush, and those old stickers on there that are peeling off look pretty terrible too.  It’s not a pretty situation!

If you have a hair brush that looks something like this, here’s what you do!

First, take a pair of scissors and cut down in between the rows of bristles to help release any of the tangled up pieces of hair. 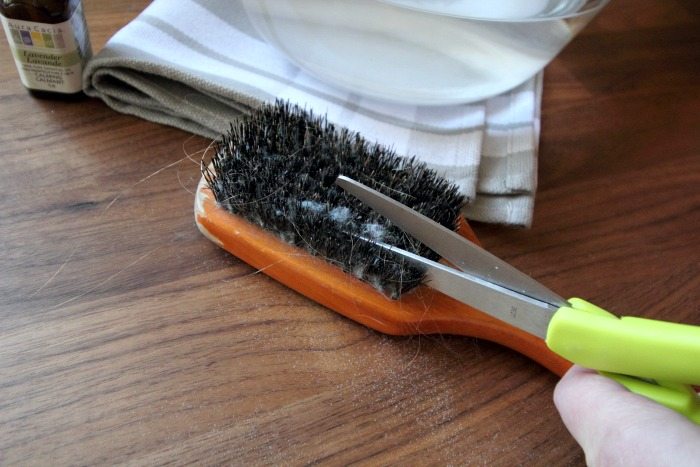 Next, grab yourself a big bowl, some baking soda, and the essential oil of your choice. Lavender, Eucalyptus, Lemon, and Tea Tree oil are all known for their cleaning and disinfecting properties so they’re all good choices. 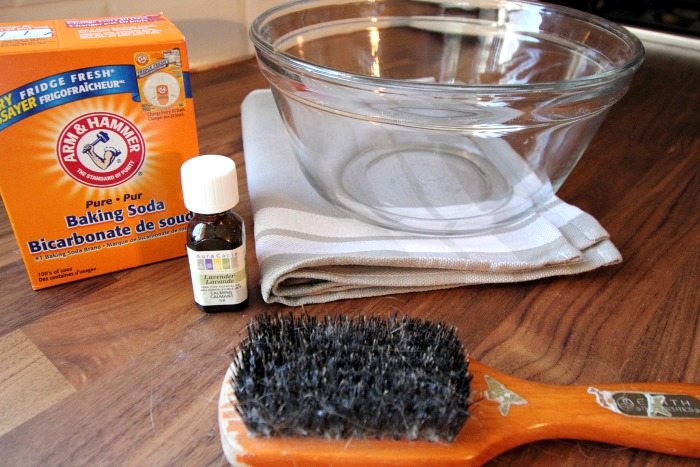 Fill the bowl up with warm water and add in about 1/2 cup of baking soda, stirring it so it dissolves completely. Add in about 20 drops of your essential oil of choice.  I grabbed the lavender to use for this project, so that’s what’s in the picture, but when I opened the bottled I discovered it was empty! Oh no!

So I used lemon instead. 🙂 My kitchen, and the hair brush, both ended up smelling amazing. 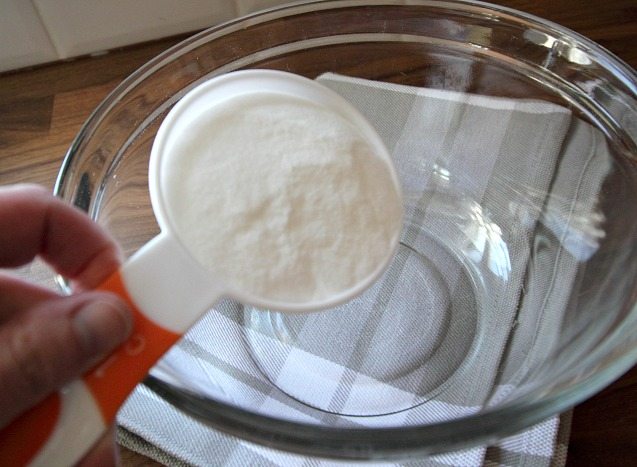 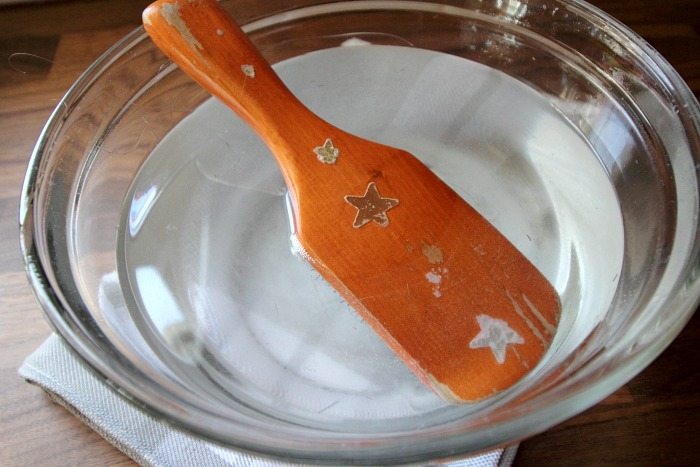 Leave the brush to soak for about 30 minutes. When the time’s up, you’ll see that all the gunk and debris from the brush has loosened up considerably and a lot of it will have actually fallen out into the water.

Take a regular, old-fashioned comb and start using it to lift out all of the hair, lint, and whatnot from the brush. I bought a two-pack of these combs that I use just for cleaning brushes for about $1.50 I think. 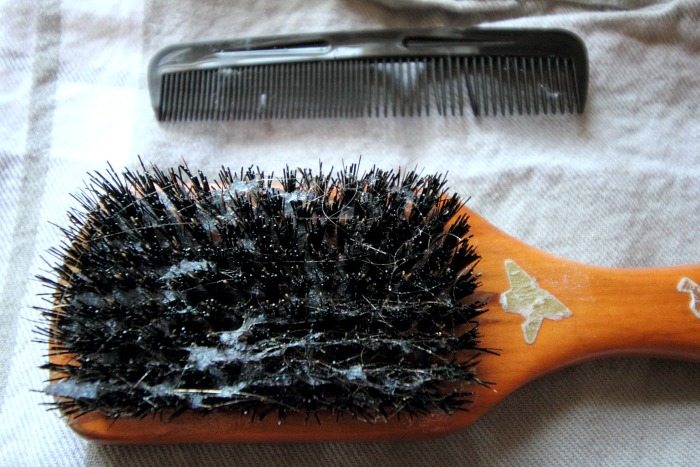 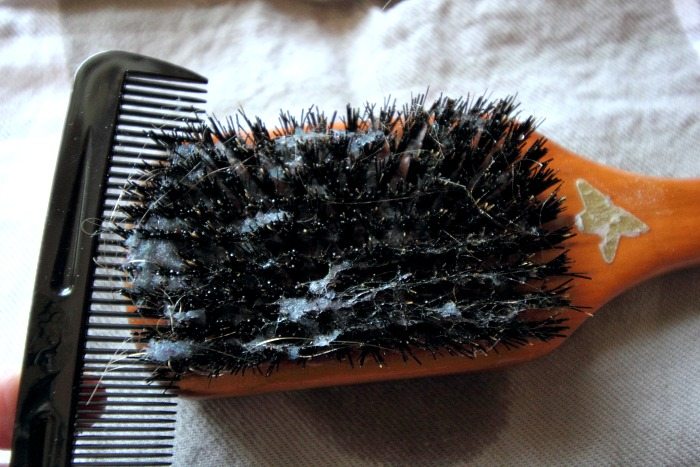 Look at all that lint coming out! 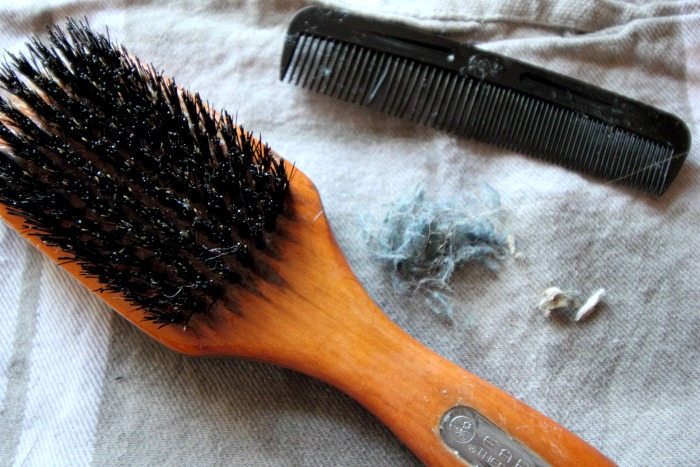 As a nice little bonus, those peeling star stickers came right off too! I think those stickers have been on this brush since summer camp 2 years ago!

When you think you’ve gotten everything out that you can with the comb, swish the brush around again in the baking soda/essential oil water to rinse out anything else that may have been left in there, then rise the whole brush thoroughly with clear, clean water. You can’t see it, but there’s actually quite a bit of baking soda clinging to the brush and if you don’t rinse it off, you’ll have a weird white coating over the whole thing.

I loved the lemony freshness of this brush so much after I was done, that I did my own brush as well!

I thought it was pretty clean to begin with because this brush is so new, but I still managed to get the water looking pretty murky just from soaking this brush in it.

So that’s all it takes to thoroughly clean your hairbrush! It’s a good idea to do this once a month if you can to keep it from putting dirt and oils right back into your clean hair when you use it.