Our dog Chuckers has been living a life of leisure and gluttony and earlier this year we decided it was time to make a few lifestyle changes for him. Our newest change has been switching to Ollie fresh dog food and today I’m sharing everything we’ve experienced with it so far!

Thanks so much to Ollie fresh dog food for partnering with me on this post! This post contains affiliate links and I will be compensated if you make a purchase after clicking on my links.

This year we’ve been working on helping our dog, Chuckers, get a little bit healthier. Kind of a canine New Year’s resolution, if you will. 🙂 I’m happy to report that it’s going really well so far and I thought since we’re a few months into the year, now would be a good time for a check-in. We’ve also decided to add in one more element to our healthy habits so today I’m going to tell you about the new Ollie fresh dog food that Chuckers has been trying for the past few weeks and what our experience with that has been like.

Chuckers used to be quite a slim little dog and he had a knack for escaping his previous owner’s home to go for all-day runs around town. That wasn’t exactly the safest scenario for him to find himself in, but it sure did keep him fit. We adopted Chuckers when he was about four years old and he had lived in shelters for most of his life at that point. He settled in quite happily into a life of endless food and treats and long all-day naps on whichever bed in the house he decided looked good to him that day. He even enjoyed the occasional nibble from the cat food dish.

In the seven years that we’ve had him, he’s gone from 27 pounds to 37 pounds, which is obviously a pretty dramatic increase when you’re dealing with a little Jack Russell/Sharpei cross like Chuckers.

We decided to start small with our new healthy lifestyle measures and have been focussing on restricting the treat consumption just a bit, moving the cat food dish to a higher counter where he can’t reach it whenever he feels like it, and going for longer walks.

We had previously been usually just going out for five to ten minute walks along the creek behind our house, so we’ve been trying to load Chuckers up in the car more often and head over to the park where we walk for about 30 minutes around the path there.

Just these few little steps have made a big difference and Chuckers is already down two pounds! We’ve been so excited to see the scale moving in the right direction that we’ve been motivated to see what other measures we can take to help improve Chuckers’ health. 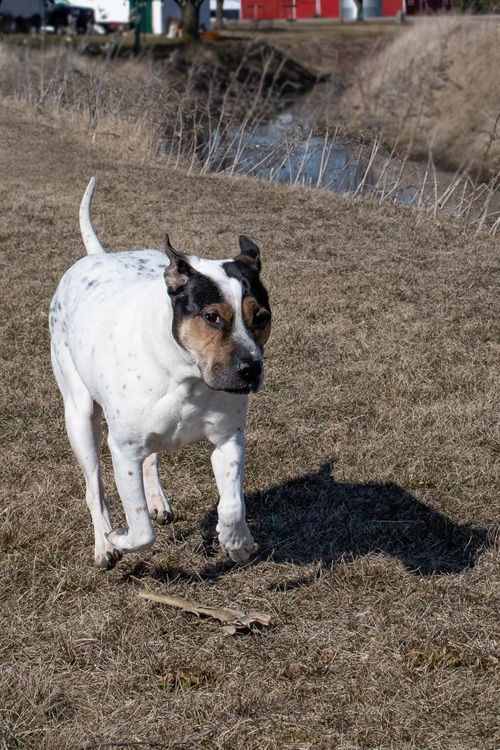 I first became interested in looking into fresh dog food when I learned about some dry dog foods being linked to all kinds of issues like canine heart problems and weight gain. That part wasn’t particularly surprising to me, because I could see the weight gain that Chuckers had been dealing with. The thing that was really shocking is that the brands of dry dog food being listed as potentially dangerous were the ones that are often marketed as the “premium” dog foods. You know the ones that I’m talking about. The fancy ones you get when you really care about your dog’s health. So when Ollie asked if we wanted to try fresh dog food for Chuckers, I jumped at the chance. You know that we make a lot of our own food choices based on wanting to be as healthy as possible, so I was willing to try something different to see if it would make a difference for Chuckers as well.

First of all, you’ll create a profile with Ollie, letting them know basic info like your dog’s breed, weight, and if they have any known food allergies. Then you’ll choose which recipes you’d like to receive. We just went with a variety. Chuckers isn’t picky and he loved them all. 🙂 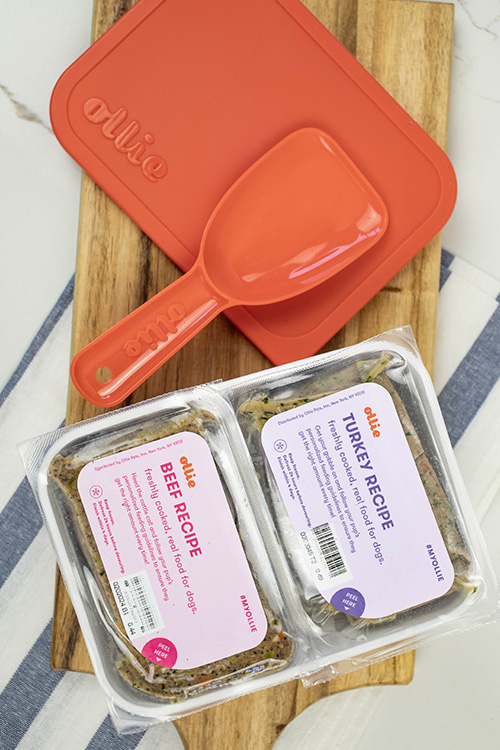 Your supply of fresh dog food arrives frozen within two days of ordering and you store it in the freezer. You’ll just need to take out the appropriate number of portion packs to defrost in your fridge 24 hours before you want to serve them. Along with your shipment of food, Ollie will send you information on exactly how many portion packs to feed your dog specifically, based on the information that you gave them. You’ll also get a serving spoon, as well as a container and a lid, which are perfect for storing any leftover portions of food in the fridge. Ollie also provides you with instructions for safely and healthfully transitioning your dog from dry kibble to fresh food. Basically you’ll do it over about a ten day period, slowly adding in a larger percentage of fresh food and reducing the amount of kibble. Our Experience with Chuckers and Fresh Dog Food

Ollie is made with human grade ingredients so I feel like it pretty much goes without saying that Chuckers absolutely loves it. What dog doesn’t love human food? The difference here is that this human food is actually good for him, unlike those pizza crusts that he manages to snag under the table.

Ollie sources most of their ingredients from reputable, family-run farms in the US and each partner must go through a rigorous certification process. All the ingredients absolutely must be human grade and the meats are all USDA certified. Occasionally, Ollie will need to source an ingredient from outside of the US to assure the highest level of quality, for example sunflower seeds grown in Canada or chia seeds from Mexico, but the emphasis is always on assuring that the ingredients are the best possible, human grade ingredients, which I think is pretty neat. 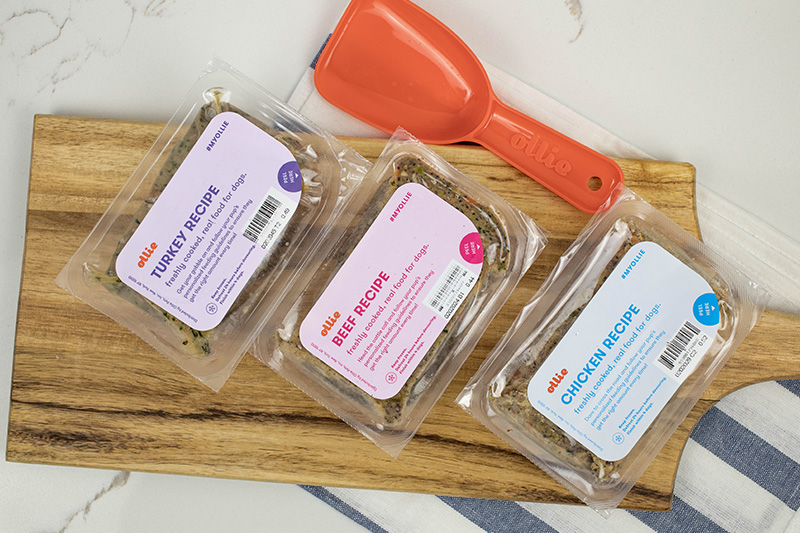 Now, I mentioned earlier that I had moved the cat food in an effort to keep Chuckers from eating it, because that has surely been a big part of what caused his weight gain. Well, one day I got kind of fed up with keeping the cat food on the laundry room counter. It was just in my way. So I put it back down in its old spot and decided that I would put it back up later when I was feeling less annoyed by it. And I noticed the craziest thing. Chuckers now has absolutely no interest in the cat food. Won’t touch the stuff. His palate has been refined. 🙂

Also, all this fanciness is clearly starting to affect other areas of his life too. Check out that bow tie! 🙂 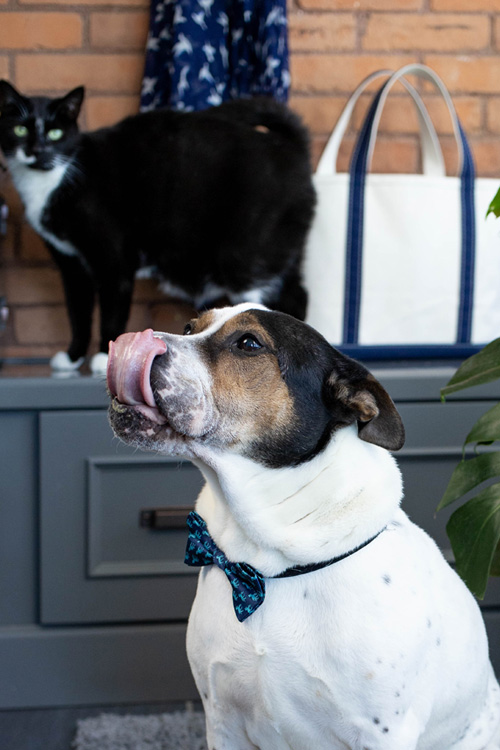 We’ve only been on the fresh food for a few weeks, so it’s probably a bit too early to tell if he’ll truly lose any weight, but I swear he has become so much more responsive. There really is an unmistakable new energy about him. Previously, we would have to call him five or six times to get him to come down from upstairs to go outside. Now he’ll perk up and run down to see us if we just mention the word “dog” casually in a sentence. Not even his name, just the word “dog”. It’s both really nice to see from an 11-ish year old dog and also hilarious. 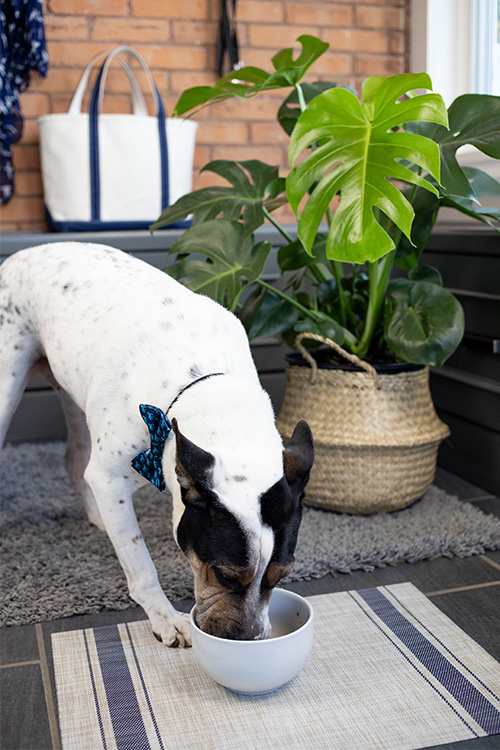 Ollie fresh dog food has been shown to help with weight loss, dental health, allergies, and so many other health concerns and they’re proud to say that they’ve never had a single recall of their food. If you’re interested in having your dog join Chuckers in his new healthy lifestyle, it’s definitely something worth looking into?

Have you tried feeding your dog fresh food before? What was your experience like? Click here to Get 50% OFF Your First Box of Ollie!