Make your own pumpkin puree in the Crock Pot! Follow this quick and simple recipe and enjoy fresher, better tasting pumpkin-y treats this fall.

At this time of year, there’s no avoiding all of the pumpkin recipes that we see popping up all over the place on Pinterest and on Instagram. Eventually, we all give in to temptation and decide we have to make at least one of these ridiculously over-indulgent treats because, hey, it’s Fall Y’all! 🙂 Of course, the one thing that all of these recipes have in common is pumpkin puree.

Some recipes call for a lot and some recipes call for just a touch. The problem with the canned puree that you can buy in stores is that you really can’t just use a little bit at a time because you have to open the whole huge can. And, let me tell you, that stuff can be expensive! I always find it so funny how expensive canned pumpkin puree is here, especially because there are pumpkin patches growing all around here that I’m pretty sure are specifically grown to make canned pumpkin puree. Funny how that works, isn’t it?

Making your own pumpkin puree from fresh pumpkins is so much cheaper and it allows you to package it up and freeze it in the right measurements that you’ll actually use. And of course, it tastes a lot better too! 🙂

Making your own pumpkin puree is just about the easiest thing in the world, especially if you use your crock pot. Here’s how you do it!

Make Your Own Pumpkin Puree

Start out with a pumpkin! 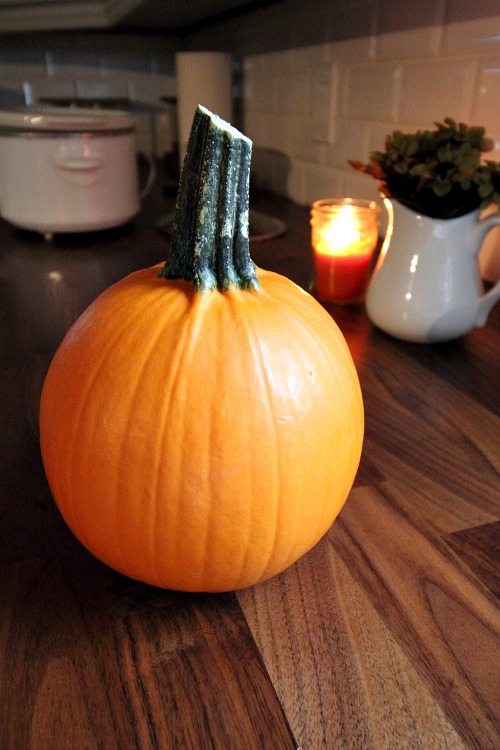 These little round pumpkins are called “pie pumpkins” and will give you the flavor that you’re used to with typical pumpkin puree. You really can use any pumpkin to make pumpkin puree though! These little pie pumpkins can usually be found in the grocery store in the squash section at this time of year. I think this one cost about $1.50 and gave me a little over 2 cups of puree. I’ve seen the canned stuff in the grocery store for over 4 bucks this year! Crazyness!

So once you have your pumpkin, carefully cut the stem off, then use the flat end that is created as a base to rest your pumpkin on for stability. Carefully cut the pumpkin in half right down the middle using a very sharp knife. Be careful because these pumpkins can be really hard to cut through! 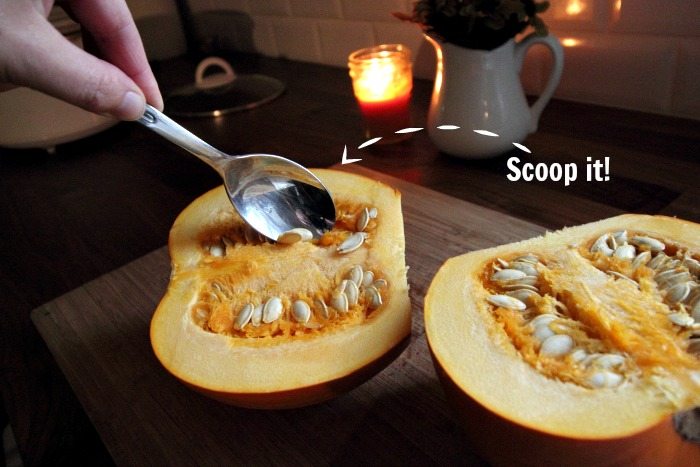 Scoop out the “guts” of your pumpkin with a metal spoon. You can save the seeds for roasting too while you’re at it! Check out my candied pumpkin seed recipe for that if you need an idea for what to do with them!

And then you’ll have some nice clean pumpkin halves! 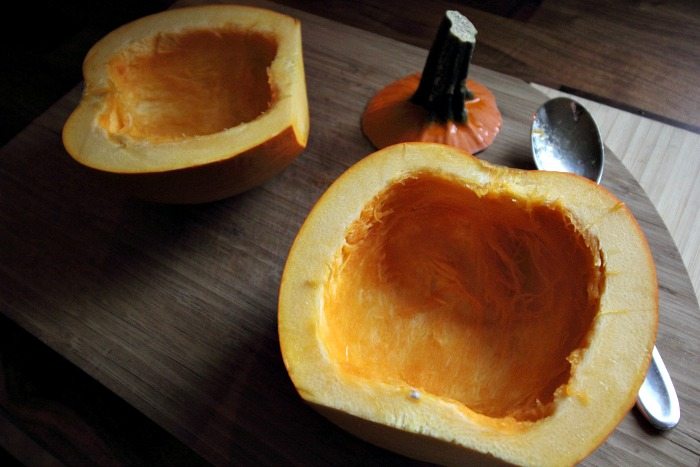 To the Crock Pot

If you have a bigger crock pot, you can just plunk the two halves into it just like that. I was using a bit of a smaller one, so I cut the pumpkin down into quarters to fit it all in there. 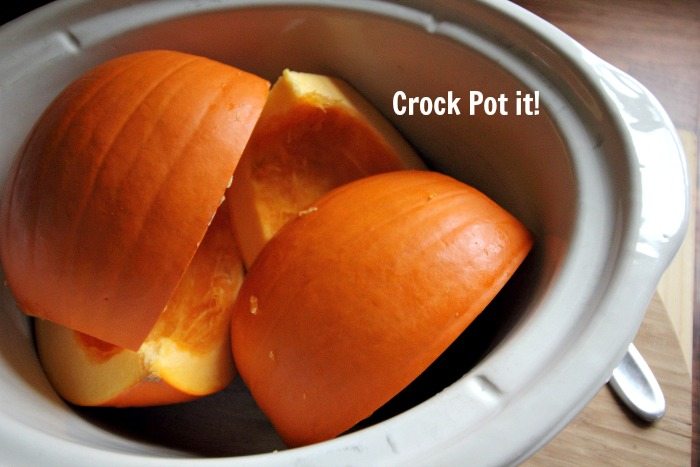 Turn the Crock Pot on low and let the pumpkin cook for about 8 hours.

When the pumpkin is good and cooked, scoop the pumpkin flesh out of the skins with a spoon and put it in a bowl or a measuring cup so you can see just how much you have. 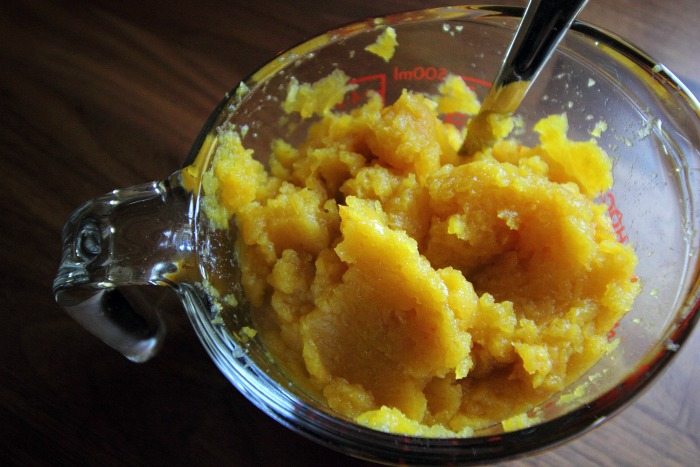 My plan was to use a blender at this point to make it really smooth, but that didn’t really work out so well. 🙂 Because I didn’t add any liquid, the pumpkin puree just kind of sat there and didn’t fall on the blades of the blender like I thought it would. Not to worry though! The puree is actually already so soft that you can really just stir it up a bit with a spoon and it’s perfect. You really don’t need any additional steps other than that! 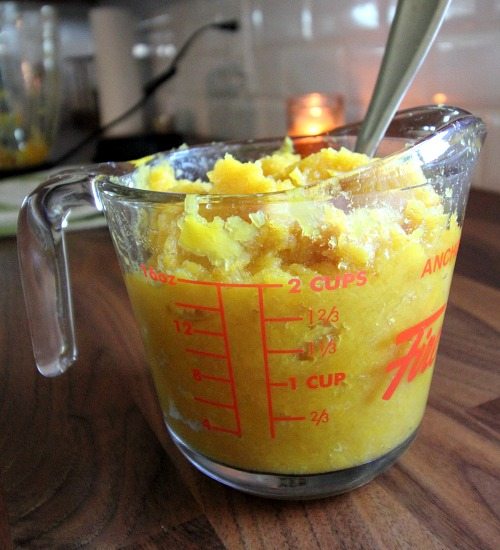 All the Pumpkin-y Goodness

The puree can either be used just like this to make a pie or you can freeze it in smaller amounts to use for later. You really do get a whole lot of puree out of one little pumpkin. Of course, if you grow your own pumpkin patch, this way of making pumpkin puree would be really really cheap because pumpkin seeds cost next to nothing and pumpkins are so easy to grow! We actually did have some pie pumpkins in our patch this year but they all ended up on our front step. I think I’m definitely going to plant a separate little patch next year for just this purpose though. You really can never have enough pumpkins!

If you’re planning on making a pie or any other pumpkin treat this year, definitely try this one out! It only takes a minute to get it going and it’s so fun to know that you made your pumpkin puree right from scratch this year!