If you’re looking for a fall dessert with some serious wow-factor, these caramel apple cinnamon rolls are it! Perfect to have with afternoon coffee or even for a fun breakfast.

I love making cinnamon rolls for my family every Sunday morning. It’s just a fun little tradition and honestly, I’d be lying if I didn’t say that I was just trying to plant the idea in their minds that at home on Sunday mornings, we always have freshly baked cinnamon rolls coming out of the oven, right around 9am. Just so when they eventually move out, they know what’s waiting for them at home if they decide to come back and visit often. 🙂 I wanted to do a bit of a fall twist for last week’s Sunday morning cinnamon rolls, and since I had just learned how to make homemade caramel sauce, and since we had just been apple picking, the next step seemed pretty obvious. Here’s how to make my caramel apple cinnamon rolls!

It should be noted that the recipes that I’ve linked to here are both plant-based, but I almost always use traditional methods for baking, so you can easily substitute non-plant-based versions of all of the ingredients if that’s what you have in the house when inspiration strikes. 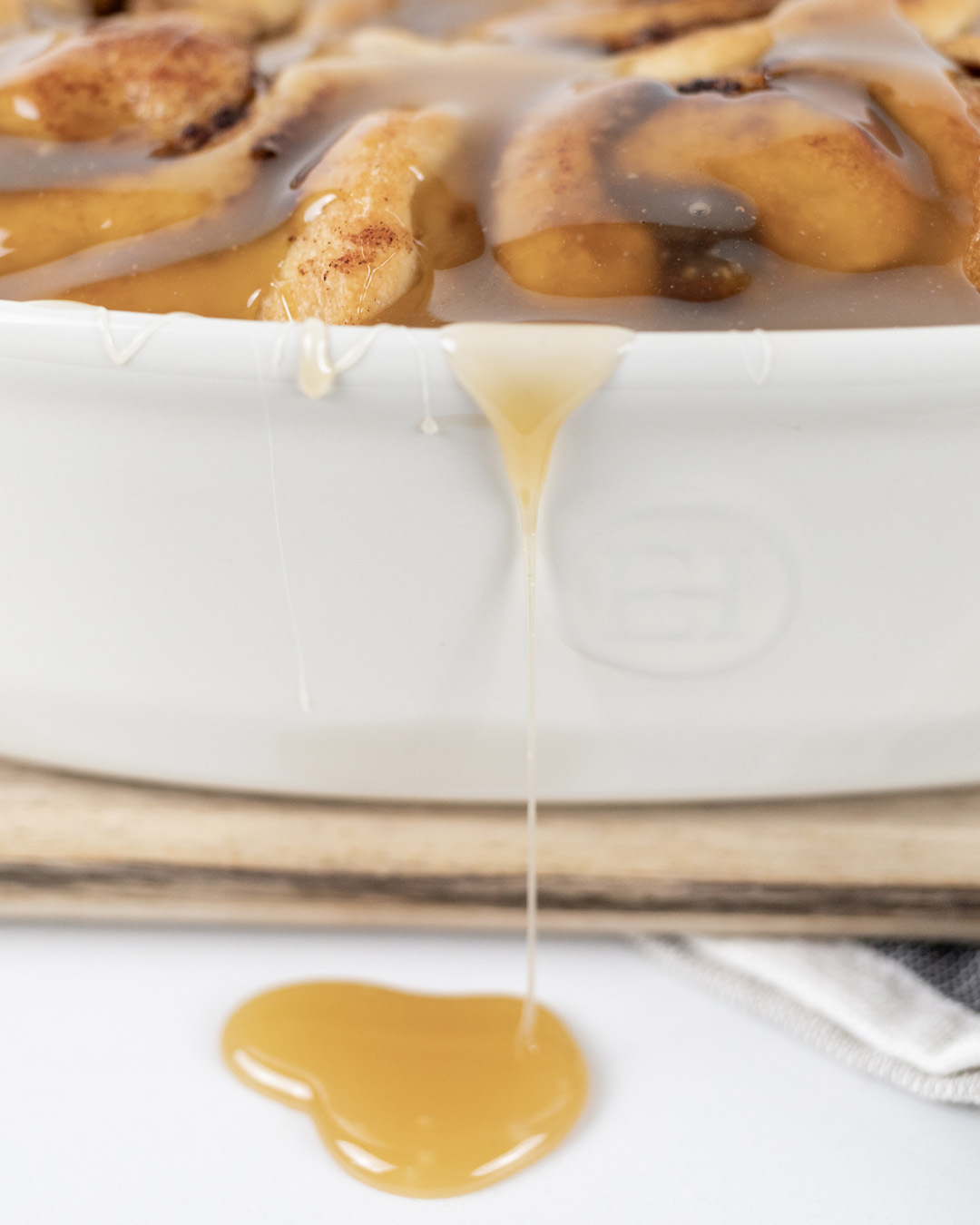 So, this is really less of a recipe in itself, and more of a super easy variation on an existing super easy recipe. I’m hoping to do a few different seasonal versions of these cinnamon rolls, so it’s worthwhile keeping the cinnamon roll recipe handy if you’d like to play along! 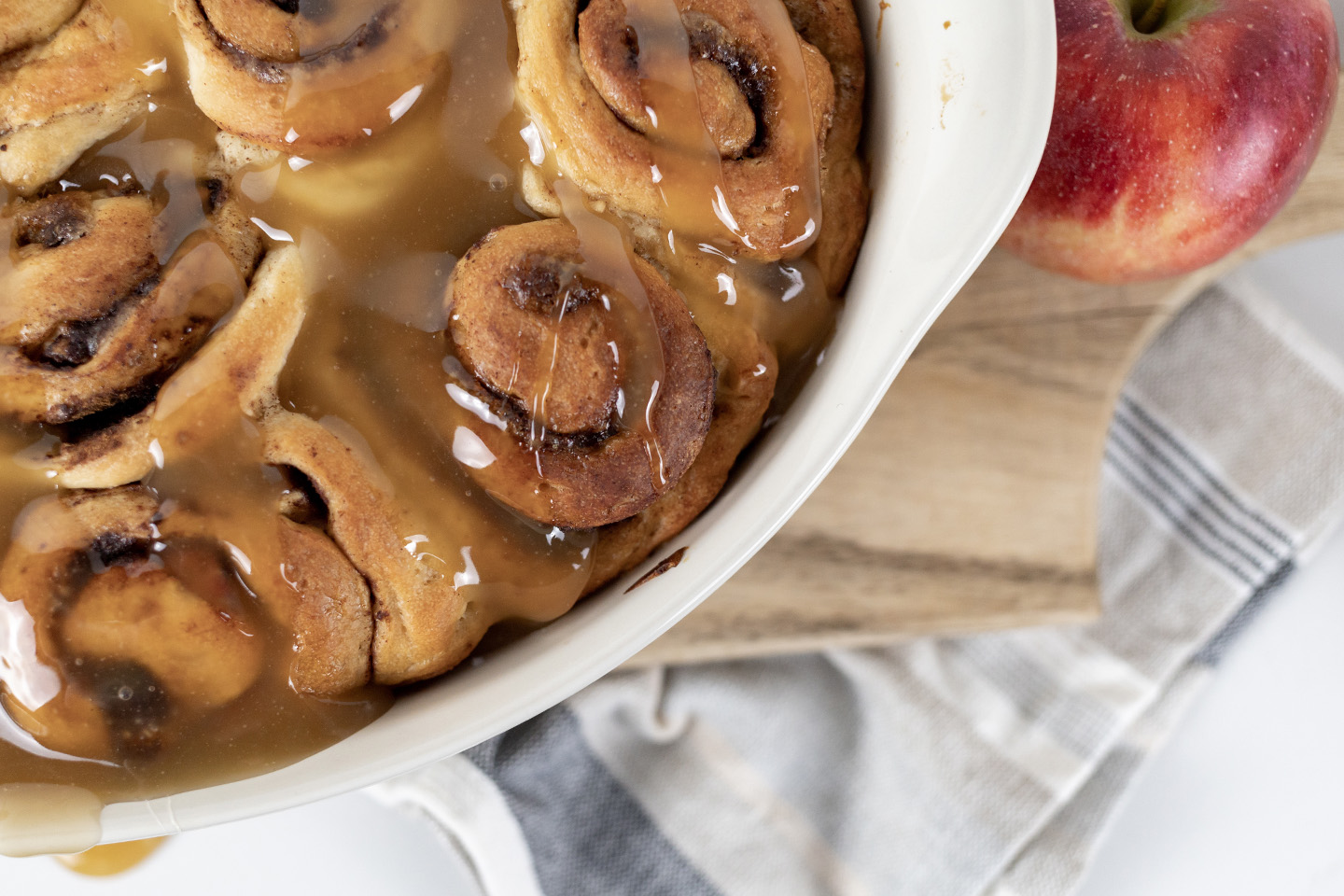 I think one of the most important parts of my cinnamon roll making method is the timing of it. Making cinnamon rolls is a really slow, relaxed endeavour and that total time required can make the whole process seem intimidating. It can actually really easily be broken down into baby steps though, and each one only takes a few minutes, which actually makes this recipe really easy to fit into a busy family’s weekend schedule.

Here’s what I do: On Friday evening, I take five minutes to set out my ingredients, my tools, and my baking dish. I measure out the flour and put it into a plastic food storage container so it’s all ready to go for me. The baking dish pictured here is my Emile Henry Large Oval Baking Dish and it’s the perfect size for a double batch of these cinnamon rolls. I usually use my square ruffled baker for a single batch. I love these baking dishes because they make for such a nice presentation straight out of the oven and they’re also super easy to clean, almost nothing sticks to them, which is important when you have all those delicious cinnamon sugar crusty bits stuck on your dish!

On Saturday evening after dinner, I make the dough and let it rise for about an hour while I go do something else. Usually I take my shower or hang out with Jack or do a little planning for styling for upcoming shoots. 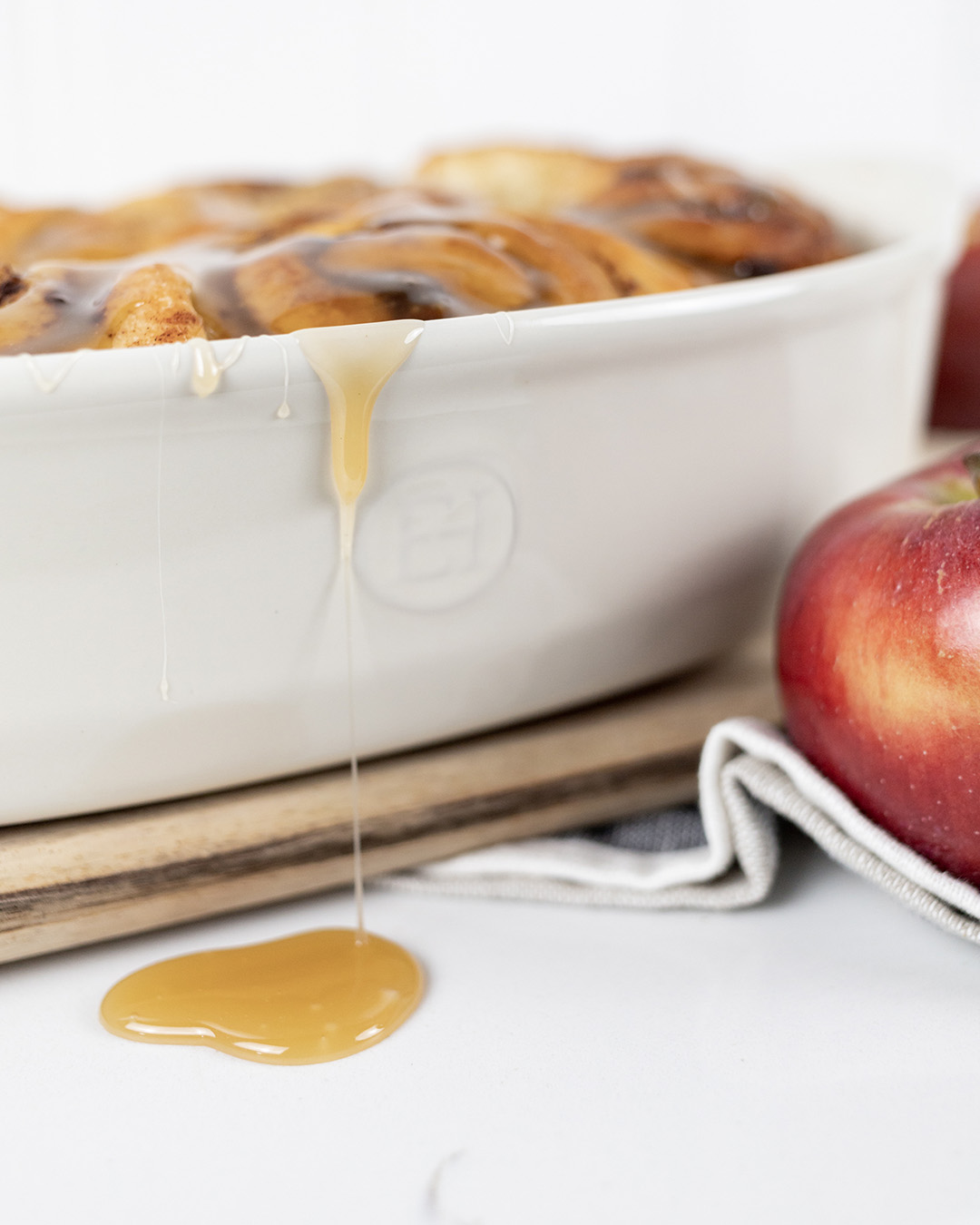 After the dough is risen, I roll it out, sprinkle the cinnamon and sugar over it, roll it up, and slice it. Then I place the rolls in my baking dish, cover it, and stick it in the fridge. I do the actual baking on Sunday morning while I’m folding the laundry and then we have cinnamon rolls and life hardly even skipped a beat!

For the caramel apple cinnamon rolls, dice the apple into 1/2″ cubes and sprinkle them over the rolled-out dough along with the cinnamon and sugar. When your rolls are done baking, just drizzle them with the caramel sauce. Feel free to make a double batch because these are great for a few days if you store them in the fridge and just reheat them one-at-a-time for a snack.

Hmm, what kind of cinnamon rolls should we make next?