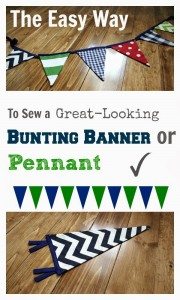 Guess what, friends? I was looking over some old photos from when we started working on the baby’s room and it’s officially been about 13 months that this project has been going on. That’s got to be some kind of record or something. In fact, when we started, it wasn’t even the baby’s room, it was just “One of the upstairs bedrooms”. I’m so happy to report that it finally feels like a real live room in there and not a shady lean-to off of someone’s old backyard shed. It’s an accomplishment, I tell you!

Just because I can’t resist, let’s see how this room was looking around this time last year. 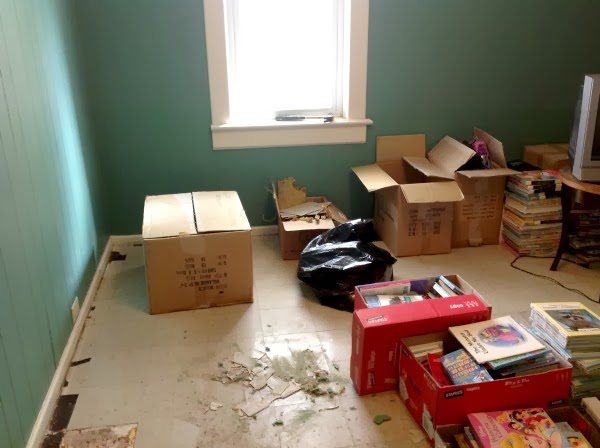 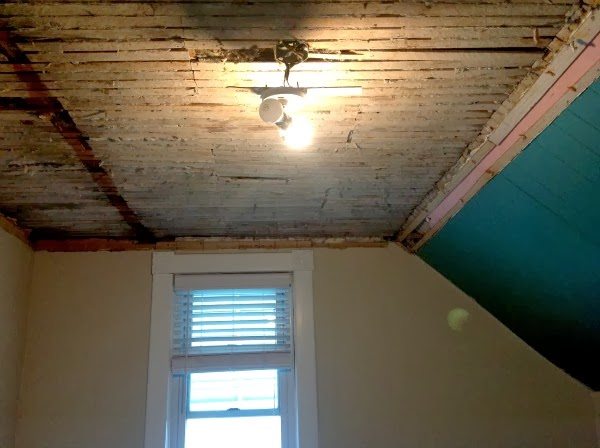 To all those who don’t think we’ve really got a fixer upper on our hands here: What say you now?

Maybe I shouldn’t be so proud of my icky ceiling pictures. 🙂

Anyway, we’ve come a long way and I’ll show you how it looks today at the end of this post.

First thing’s first though. Today I want to show you another project I’ve been working on for the “decor” part of the room with some of those fun fabrics that Online Fabric Store sent me a few weeks ago. I’m so glad that this bunting trend doesn’t seem to be going anywhere because I love them and I’ve finally learned how to make my own in a way that’s easy enough for someone as impatient as me. It’s a lovely thing! 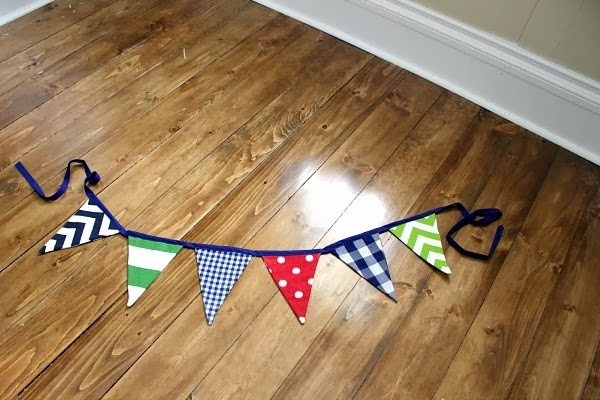 I’m sure there are many “better” methods out there for making these, used by the “real” sewers of the world. This one works just fine for me though! 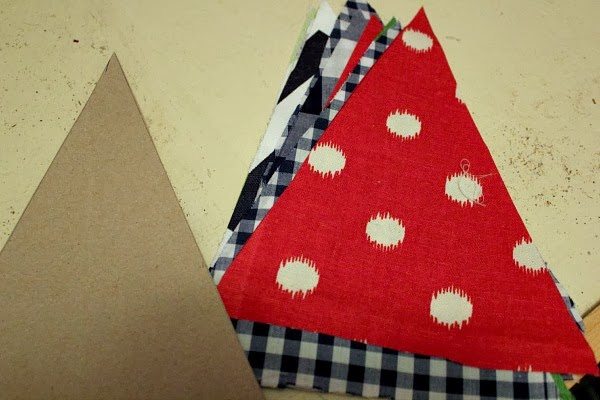 Make yourself a triangle template out of some kind of cardboard (mine’s from a old lasagna box if you’re interested) and cut out two triangles from each fabric that you’d like to use. 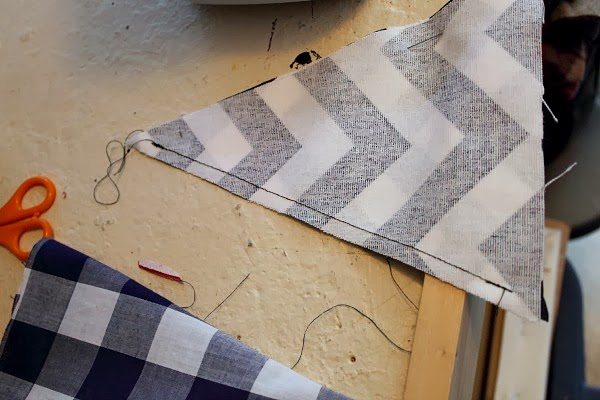 Put the two triangles together with right sides facing in and sew along the sides of the triangle, leaving the top open. 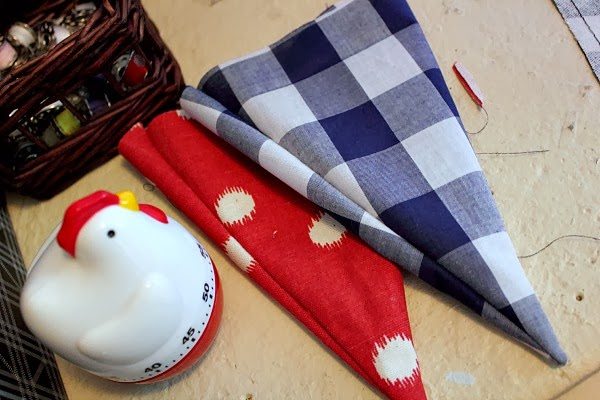 Turn them all right side out, using something pokey to get the tip of the triangle nice and sharp-looking. The chicken timer isn’t entirely necessary, I was just using it that day to get the sewing done in between my other daily tasks. So I was doing 5 mins of sewing, then 5 mins of something else, then 5 mins of sewing, etc.. It works for me and the chicken timer always looks so handsome in photos, don’t you think? 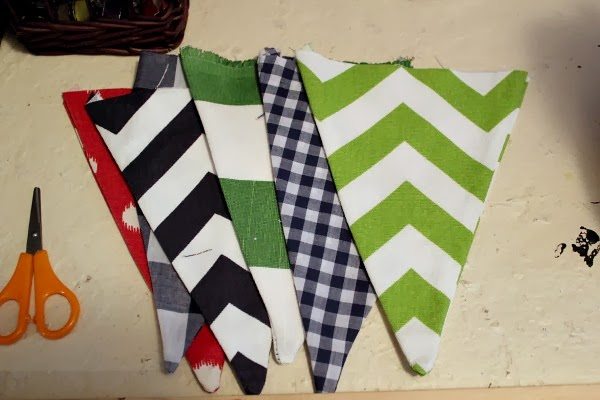 Once you’re done, iron all the triangles super super flat. 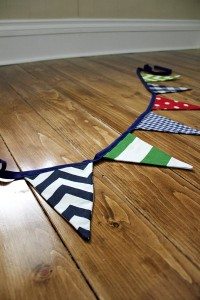 Get some double fold bias tape, place each triangle inside the fold and sew it them into place! Done! 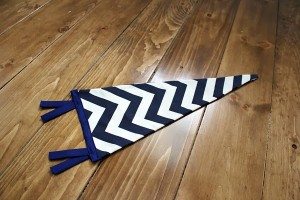 Since this is going to be a sporty, baseball-themed room, I made this pennant type thing for the wall too. Pretty much the same thing only you need just one triangle and it needs to be bigger, obviously. I wanted to find some more places to use this navy and white chevron pattern because it’s just the best, so this worked out perfectly. 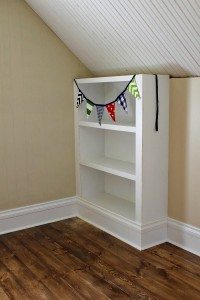 I hung the bunting over one of the bookcases, just to show you, and Chris got a little insulted that I was already trying to “jazz up” the shelves. He assumed that meant they weren’t pretty enough on their own, so now he’s working on adding a little something to them. This isn’t even where the bunting is going to go, but I’m not going to stop him from adding more trim if he wants to! More trim is always a good idea. 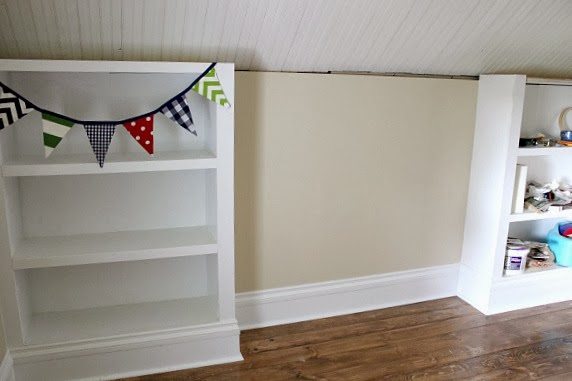 You can see the trim isn’t quite all finished in here, but it’s definitely a big difference from this time last year. 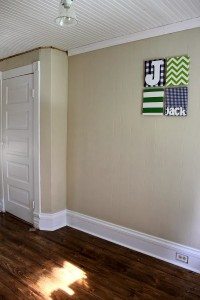 Here’s the other side of the room with the wall art that I showed you last week. 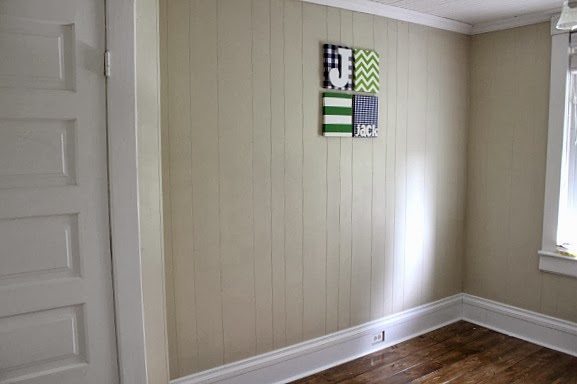 …and looking the other direction.

Next up we have the trim to finish, paint to touch up and then we’ll start bringing in the furniture, curtains, rugs, etc. And maybe another bunting or two for good luck. Those things are just too cute!

Thanks again to Online Fabric Store for providing me with the fabrics for this room!