Whew! Just in time! It’s Christmas Eve and here I am with my last Christmas post of the season. I can’t believe I got it done on time!

Back in October, Balsam Hill contacted me to see if I’d be interested in trying out one of their artificial trees. We’ve always had real trees, but recently I’ve been really interested to see what an artificial tree is like as well. We have two real trees up right now in our house, and eventually I’d like to one year be able to have a tree in every room. Going to the farm to cut down all those trees just wouldn’t be convenient, so having a few artificial trees for the bedrooms makes total sense.

Balsam Hill agreed to try to rush a tree to me within a week so I could get it up and make a little video for them with plenty of time before baby Jack would be born. Unfortunately, the customs people at the border had other plans and I actually only ended up getting the tree about 6 weeks later, which was a couple of days ago. I still want to show you the tree all decorated up, so I’m doing a quick blog post on the tree instead.

So first we had to put the tree together, of course. 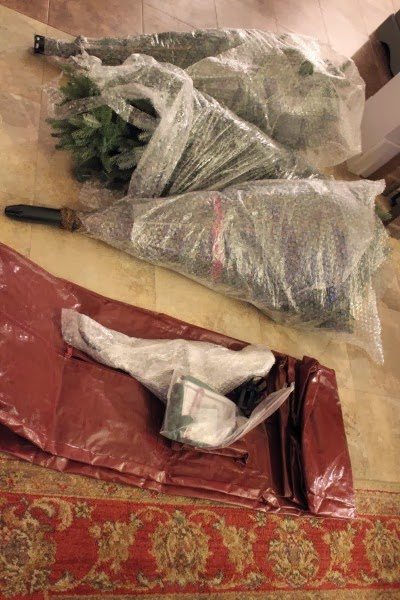 It came in three separate sections, all wrapped up. I love that there was even a storage bag provided for the tree. 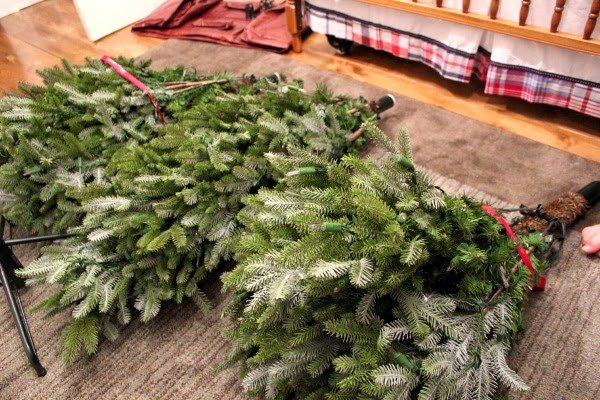 All we had to do was stick the three sections together and it was good to go. The tree’s pre-lit and even those lighting connections went together automatically when the tree was assembled.

Here it is in the middle of the room. 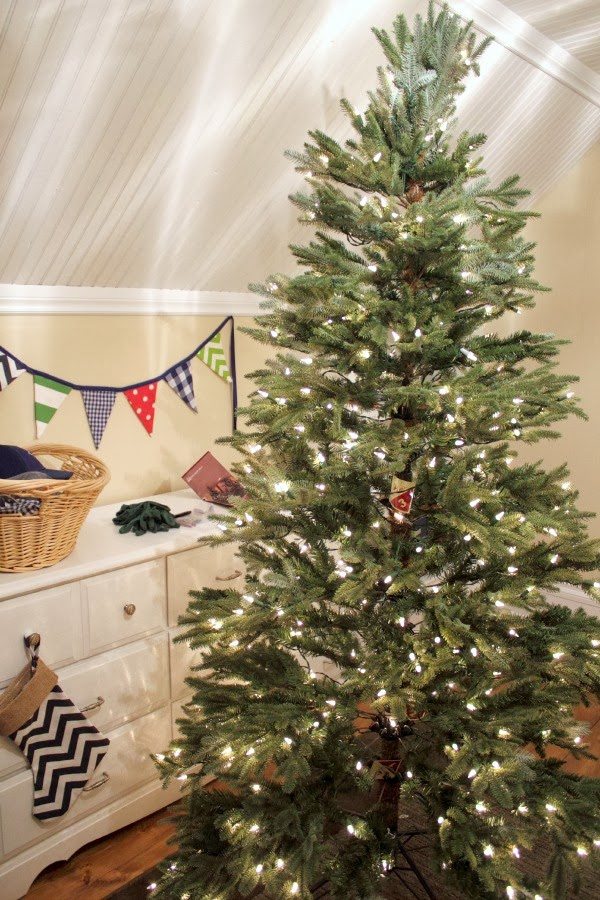 You can see it looked pretty great like that already, but we fluffed the branches up a little first before decorating it. One of my favorite features of the tree was the extra long cord that came with it. We could set it up in the middle of the room and still not need an extension cord to plug it in! 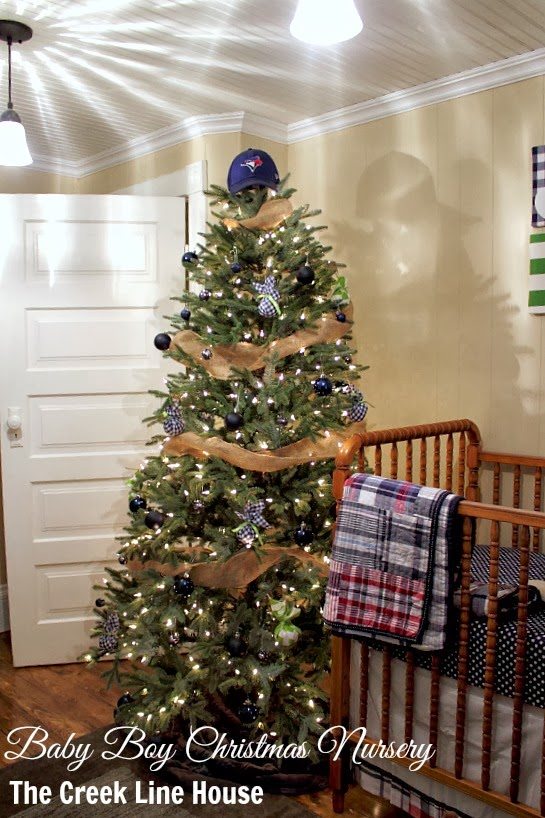 And here’s the tree all decorated! The plan was to have this done a long time ago, of course, before Jack was born. As it turned out, I ended up decorating it mostly holding a fussy baby in one hand. 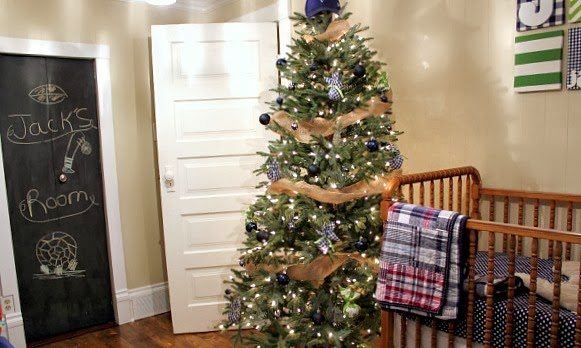 I had to make it a pretty quick decorating job, but I still really love how it turned out. It helped that I had all my decorations planned out already. 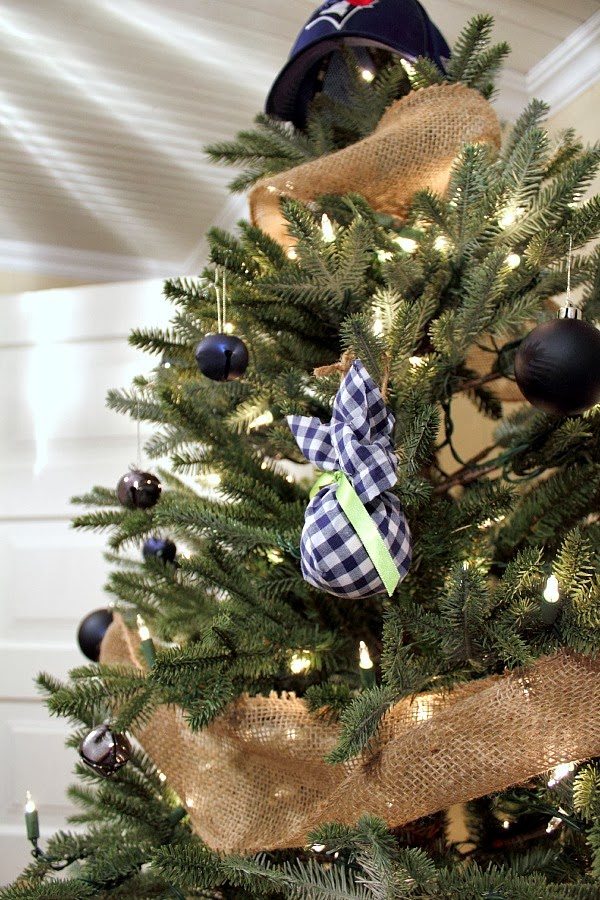 Chris isn’t a big fan of the idea of an artificial tree. He says you might as well just have an artificial turkey as well. I have to admit though, that the greenery on this tree is pretty convincing. This one is the Fraser Fir Style. 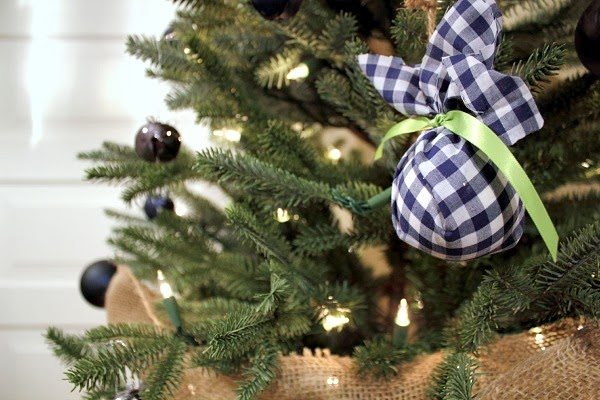 Most of the decorations on this tree are pretty simple jingle bells and balls in various shades of blue, but I used my super easy DIY fabric ornaments on here as well and I love the way they look in the room with all of the other fabrics I used in here. 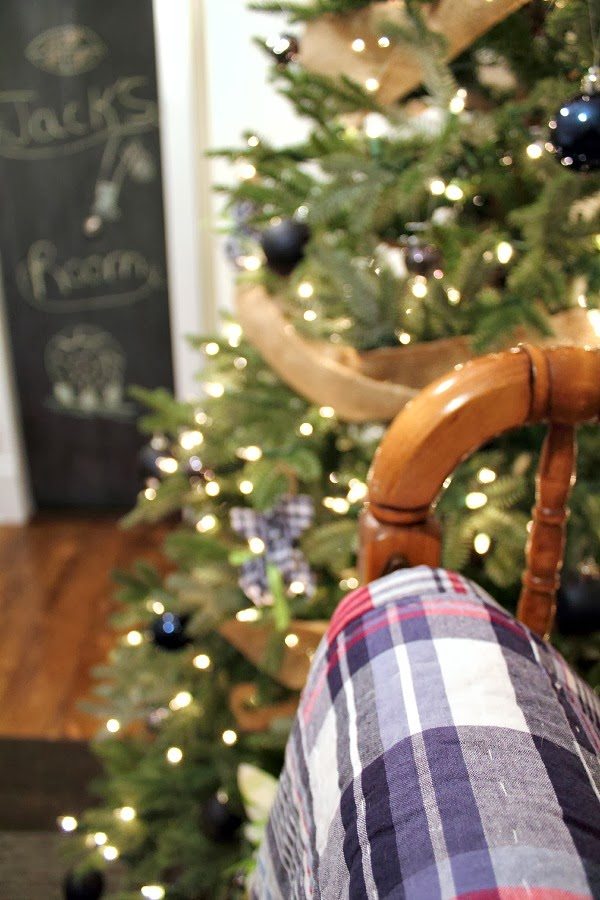 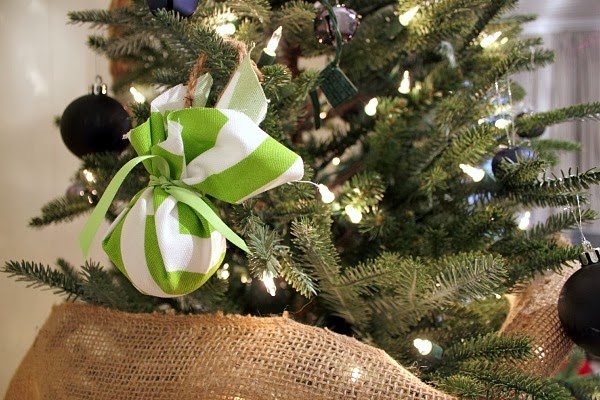 Can you spy that extra little plug hanging there on the tree? There are a few of those as well so you can plug in any other lighted elements that you might like to add. Love that! 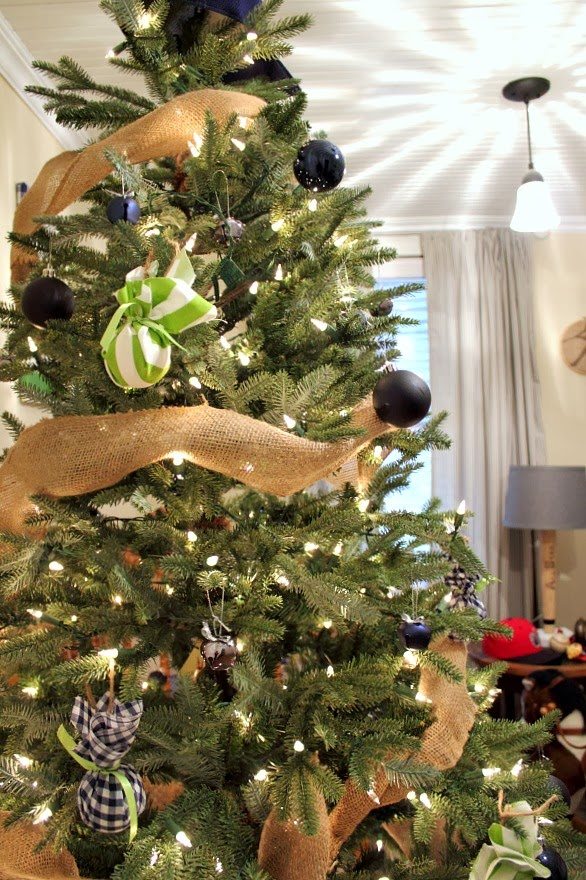 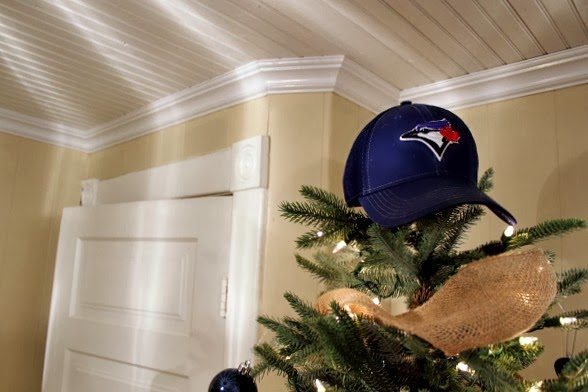 We often used lighted angels for our tree toppers, but I thought it would be fun to use a Toronto Blue Jays hat for Jack’s baseball nursery. Is it cute or is it just totally ridiculous looking? I’m not sure, but at least it’s fun! 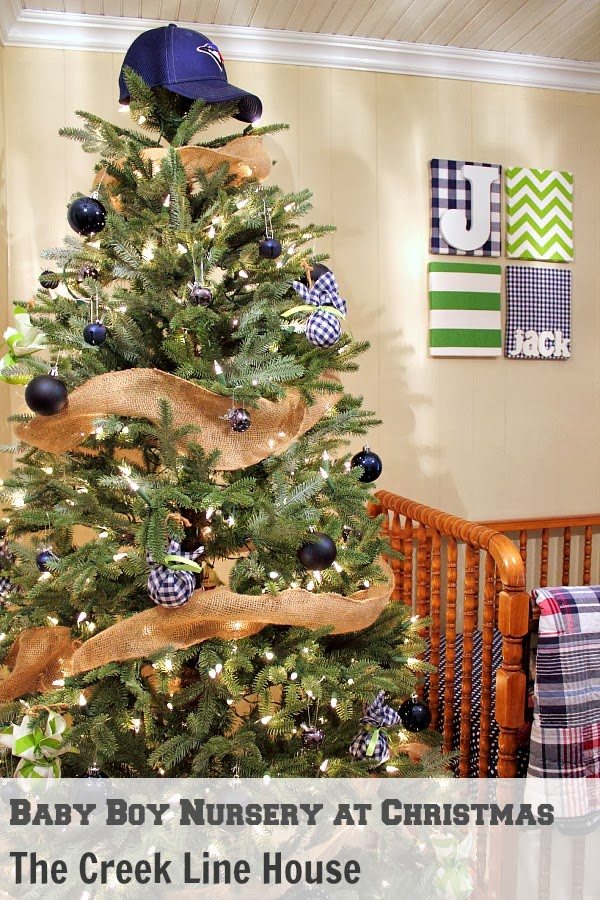 Chris says he’ll be starting renovations on Kennedy’s room in the Spring, so I’m hoping to get another tree just like this for her room next year. I’m so thrilled with how cozy it makes Jack’s room feel. 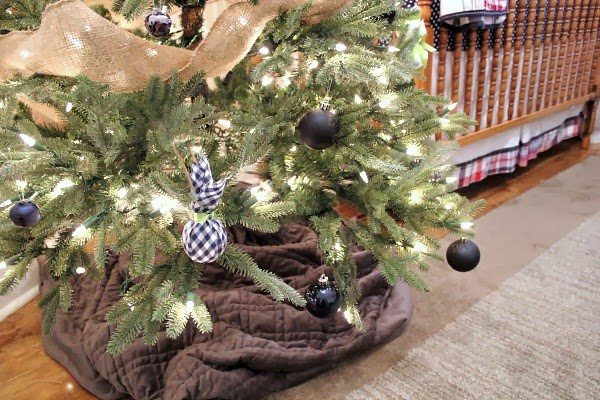 I always seem to be forgetting about tree skirts, so I just stole the throw from the living room and used it up here. It works! 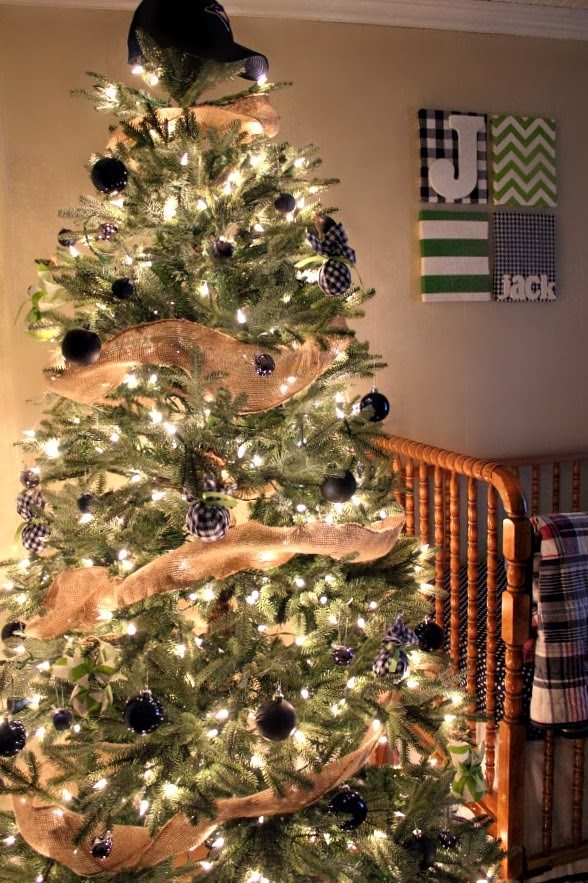 Here’s how it looks in here all lit up at night.

You might be thinking it’s a little unfair that Jack gets the beautiful tree while Kennedy has to wait until next year, and you’d be right. I promised her that hers will just have to be even better than his to make up for it!

No pressure for me or anything.

In the meantime, she’ll just have to torment her little brother the way only big sisters can. 🙂 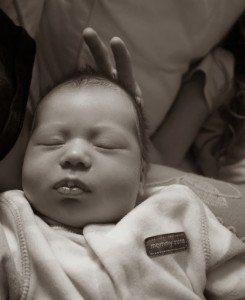 If you’ve enjoyed the little peeks at Jack’s room in these photos, stay tuned for the full before and after for the nursery coming up on the blog really soon!

Thanks so much to Balsam Hill for providing me with this beautiful tree. I’m definitely convinced that I need a few more good quality artificial trees around the house and I’ll for sure be heading back to the Balsam Hill website to place my order next year!