This is the best way to keep celery fresh for a really long time! Store your celery using this trick and you’ll be amazed at how long it can last! 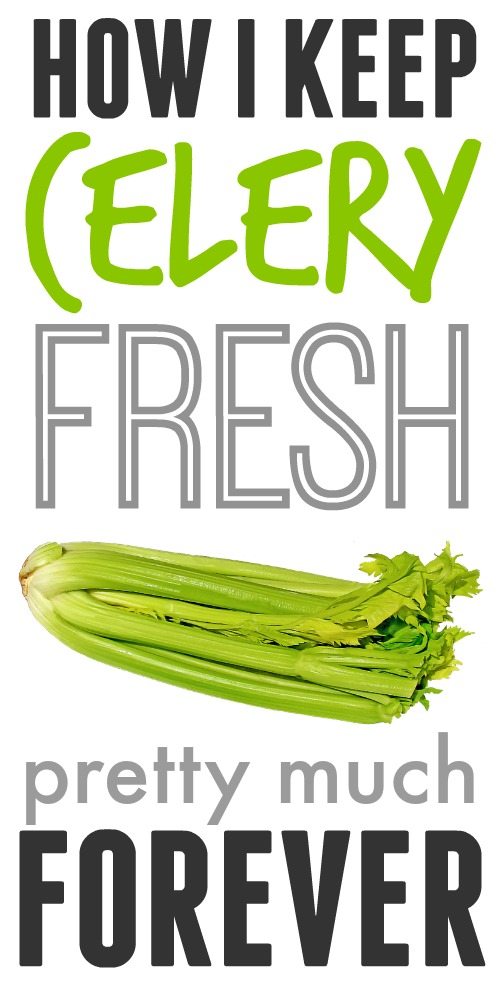 If you’re a fan of celery and have struggled in the past with how to keep celery fresh, this little tip may change your life a little bit! Most people need celery for a recipe every now and then. I personally love celery and cream of celery soup is actually one of my favorite foods ever in the world. BUT. Every time I pick up celery, it seems to go floppy and rubbery before I have a chance to use it to its fullest potential. I always have big plans, but really, the window to use up celery while it’s still nice and fresh is only 3-4 days at the most.  I usually just end up having to get rid of it. It’s such a shame because celery adds such a nice flavor to so many dishes and it’s such a great snack too!

I didn’t really believe this trick would work when I first heard about it because it seems just a little too good to be true. After testing it out for 3 and a half ish weeks though, I can tell you, that this is one amazing piece of useful information! It actually worked, you guys!

So here’s all you need to do to keep your celery fresh for pretty much the rest of forever:

How to Keep Celery Fresh

First, pick up some celery at the store and bring it home. Use a bit of it for a snack or for a recipe if you need to, or not. It doesn’t make any difference.

Next, grab your handy-dandy roll of aluminum foil and tear off a sheet that’s about 12 inches long.

Now, here’s where there’s a bit of controversy:

I’ve seen it done a couple of ways. Some people like to wrap the entire bunch of celery in the foil, some people like to just wrap the end. I just wrapped the ends because I guess I was being a bit of a slacker. 🙂 I placed my celery back in the half-ripped-open produce bag after that. I’m not sure that the bag was necessary especially being it wasn’t doing much in its state, but I thought I’d let you know just in the spirit of full transparency. 🙂 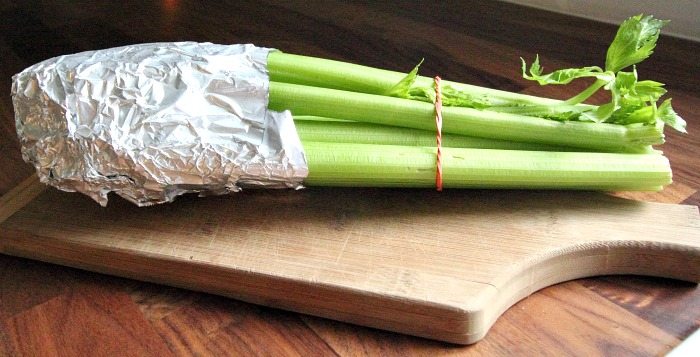 How I Figured Out That This Works!

I stuck the whole thing back in the fridge and forgot about it.  We traveled to Virginia for a soccer tournament, then Washington D.C., then back home for a few days, and finally to Michigan for a few more days. After arriving home and being here for a few more days, I decided I would make some stew freezer meals that I could throw in the Crock Pot later and realized that I had that several weeks old celery still in the fridge. I decided that this was the perfect chance to test things out and what do you know? That celery was still perfectly crisp! As crisp as the day I bought it, and maybe even crisper if that’s possible. 🙂

I’ll definitely be doing this from now on whenever I have celery in the house, which will be a lot more often! Have you tried this trick before? Do you have something different that you do to keep celery fresh?