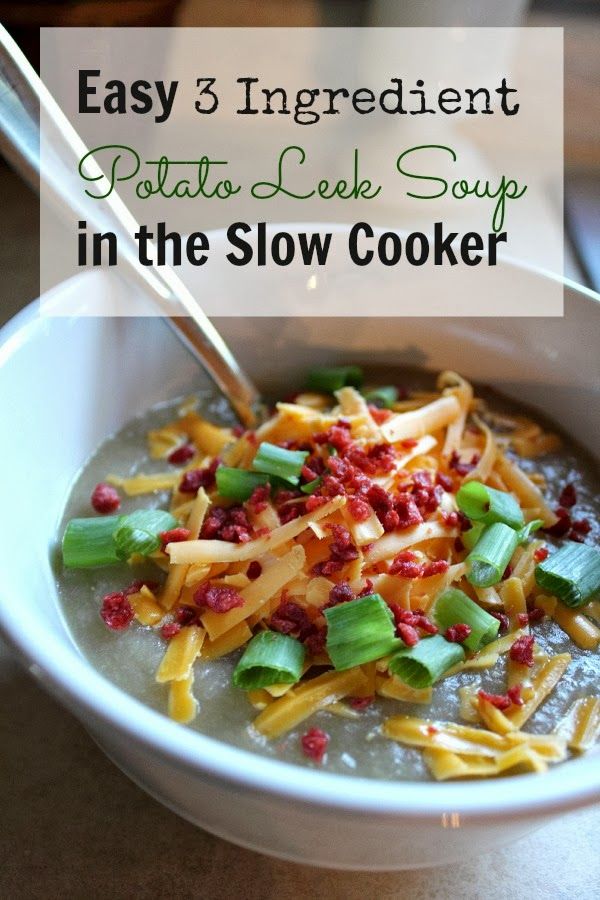 Veggies. Does your family eat enough? I know mine definitely doesn’t, so the other day I set out to make a recipe containing veggies. But it had to be super easy. And I had to be able to disguise it as something comfort food-y, like we would normally eat.

This recipe is actually something I like to make quite often in the cooler months, but I’d forgotten about it over the Summer. So I thought I’d share it with you today, since I was making it anyway and it’s so darn good.

It starts with just three ingredients! 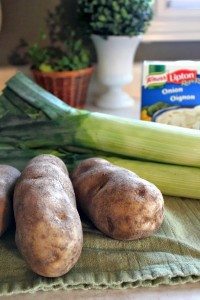 OK, so potatoes aren’t the #1 healthiest veggie around, but real potatoes and leeks are infinitely better than chicken fingers are fries, right? Hooray for real food! And for baby steps that are just so yummy. 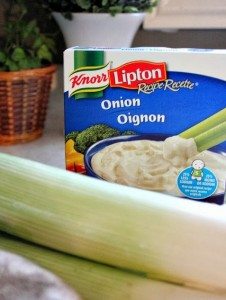 Here’s what you do:

2) Rinse 1 large leek and slice it into 1/4″ rounds. If your leeks came in a pack of three like mine did, slice the other two and freeze them so you can make this soup again anytime you like!

3) Combine potatoes, leeks, 1 packet of onion soup mix, and about 4 cups of water in the crock pot.

5) Puree the soup with an immersion blender or in small batches in a blender. Add a bit of water or milk (if desired) to thin the soup out to a consistency that looks good to you! 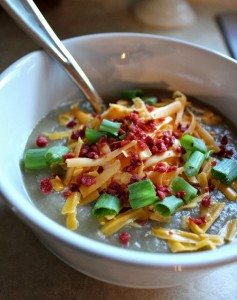 Now, this soup is delicious as-is, but I find that the key to getting my family to actually eat it is all in how I dress it up. Doesn’t that look like a party in a bowl? They have no idea that they’re getting several servings of veggies here. Mwahahaha.

I like to add things like sour cream, shredded cheese, bacon bits, and sliced green onions to the top, but really there are so many different ways you can mix this up.

The great thing about this basic soup is that, since it’s pureed, you can even add in all kinds of other veggies while it’s cooking and no one has any idea! Broccoli and cauliflower are my favorites so far.

Well, now that this recipe is dusted off for the season, I think it will be making a lot of appearances around here as the weather gets chillier. I hope you’ll try it out too!