Wood counters are a beautiful, inexpensive and very DIY-friendly way to update your kitchen.  Here are some things you need to know about wood counters to help you make the right decision for your home. 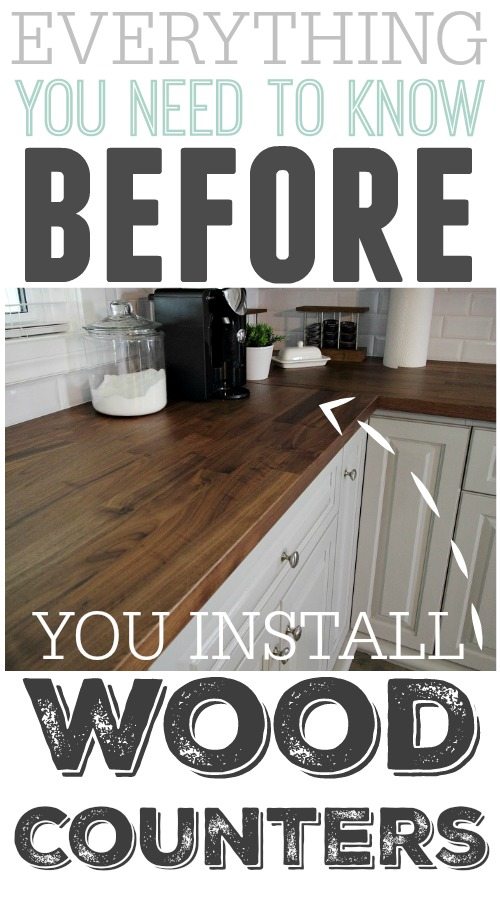 We finished up our little kitchen update a couple of years ago and I’ve been meaning to take some time to talk to you about some of the details in the room as well as why we chose what we chose and how we’re liking everything now that we’ve lived with the room for a couple of years. Today’s all about those lovely wood counters!

We honestly went back and forth on these counters a few times last fall when we were trying to figure out what exactly we wanted to do to bring our kitchen into the current century. We had beautiful granite installed in our master bathroom last year and it’s pretty stunning so I was starting to think that granite was maybe the way to go in the kitchen as well. I had been planning on wood counters in the kitchen since we moved in here 5 years ago, but of course I got temporarily distracted by the beauty of the granite. It’s understandable, right? 🙂

At the end of our string of many many conversations on this subject, Chris finally convinced me that wood was probably the way to go this time around, for a number of reasons. Mainly, we wanted this update to be quick, cheap, and super beautiful. We only spent about $1500 in this room, maybe less, to make it feel almost brand new! OK, that doesn’t count the appliances but we’d been slowly upgrading those over the last few years, so we’re not counting them. These counters that we decided to go with are from IKEA (yay IKEA!) and they’re called Karlby in Walnut. I actually ordered one too many pieces so this project could have been even cheaper, but we’ll find a home for that extra piece somewhere at some point. The counters, just like our gorgeous new farmhouse sink, saved us a ton of money but still look like a million bucks!

So if you’re thinking about installing wood counters, here are some things that I hope you’ll find helpful to know as you enter into this kitchen-upgrading process! 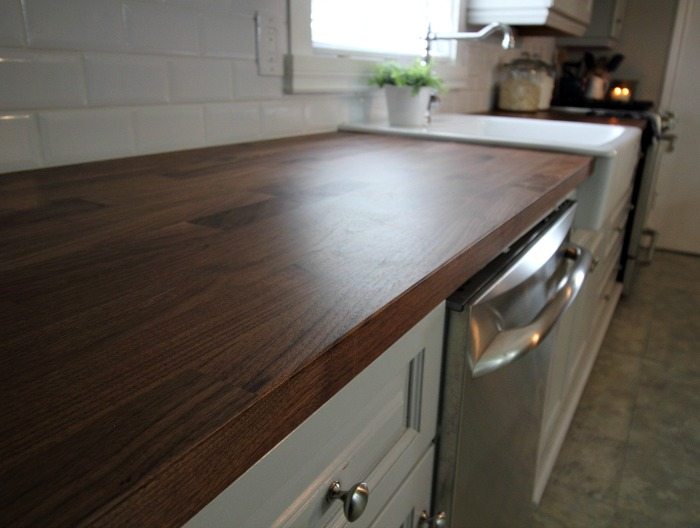 (The dishwasher is this one from GE Profile)

You may think this really goes without saying, but sometimes it’s hard to tell from a picture in an online store or on a website how something really looks in person. Wood is kind of tricky too, because sometimes wood can look really fake and plasticky even when it’s totally real and of a good quality, just because of the way it’s finished. These are the walnut counters from IKEA and I was a little worried that they’d look fake as soon as we took them out of their protective packaging because it seemed like maybe they were a little too perfect, but once we got them installed and could see the way the light from the window hits them and the way the grain is really apparent, I knew that my new counters and I were going to be best friends. 🙂

Well, compared to other natural materials, like granite, they are. How much would granite be in a kitchen? Well, depending on the square footage of your counters and the type of granite you choose, I think most kitchens usually end up costing between $5000 and $10 000. Our beautiful walnut counters? About $500. And I ordered too many pieces, so actually probably more like $400. You can’t beat that and you still get the beauty and the warmth of a natural material. 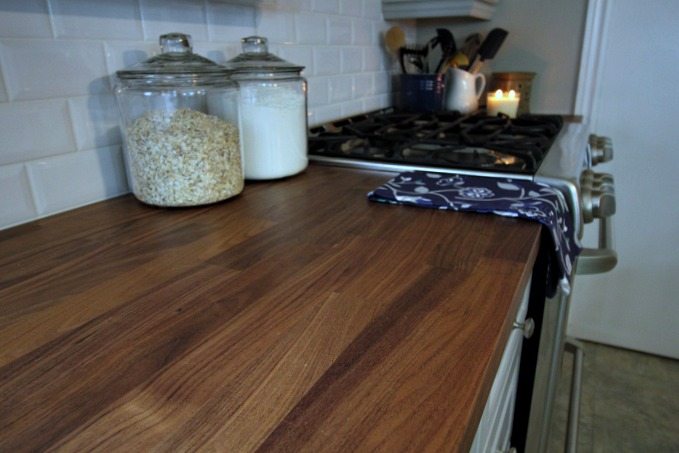 You may think that the next thing that I was going to tell you was that not only are these counters beautiful, but they’re also amazingly convenient, tough, and scratch-resistant. But I’m not. They definitely do scratch, get dinged up, and show marks if any of your kids happen to cut a strawberry with a butter knife on them. Of course they do. I know, I was hoping they would somehow be magically scratch-proof too, but they aren’t. We mostly have tiny dings near the side of the sink where we put our dirty dishes down, and a scratch or two from sliding a rough-bottomed pan out of the way without thinking. Nothing too huge and nothing that you would notice at first glance, but they’re definitely there.

The great news about wood counters is that you can easily refinish them at any time. Just give them a sanding with a piece of fine-grit sandpaper and reseal them with an oil made for wood counters or even just a mineral oil. Other than conditioning them with a bit of oil every now and then when I’ve felt like it, I still haven’t needed to “refinish” my counters yet, despite those few dings and scratches that I mentioned earlier. With any other material, if you mess it up, you’re pretty much stuck with it for the life of the counters, but with wood, it can all be fixed! 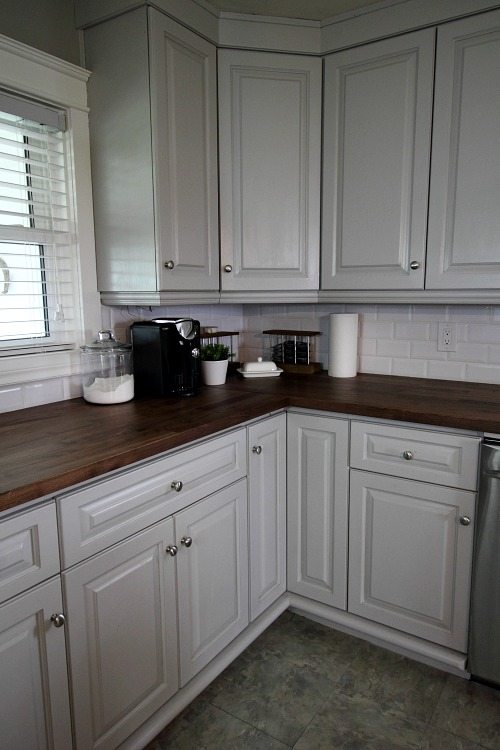 Despite those few scratches, I have been surprised at some of the more durable characteristics of our walnut counters. They hold up amazingly well to moisture from wiping, steam, and things like that. I was worried at first about wiping them down with soapy water, because that just seemed wrong to do to wood, but they continue to hold up to moisture perfectly despite my constant counter wiping throughout every day. I’ve also been amazed that they’ve not had any burn marks or heat marks when  we’ve accidentally put a hot pot or pan down on them, which has happened pretty frequently. I definitely try to use trivets as much as possible, because I really don’t want to push my luck, but so far we haven’t had a single mark from any kind of heat.

They Get Dirty-looking Pretty Easily

There’s a reason that I wipe my counters down so often and that’s because they look like they need it. That’s mostly due to the fact that they’re a dark wood color, but just like dark hardwoods, they show every little speck, dust bit, or smudge, so wiping them down frequently really makes them look a whole lot better. The good news is that wiping them down really makes them look a whole lot better! Yes, I meant to say that twice. 🙂 You may think that having to wipe your counters so frequently is kind of annoying, but once you see how great they look when they’re freshly cleaned by such a quick and easy wipe-down, you’ll definitely know that it’s worth it. 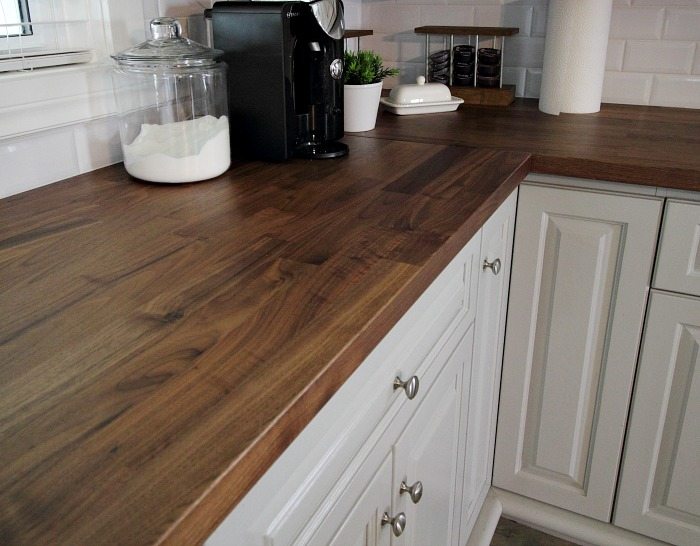 Installation is so so so Easy

You can cut these counters yourself in almost any basic home workshop and you don’t need to worry about the weight of your counters being an issue for one or two people to handle on their own and those factors alone make wood counters a lot easier to install than most counter options. One extra little bonus that we were happy to discover was that corners don’t need to be mitered with wooden counters. Of course, we assumed that we would miter the corner,  just like our old laminate counters were mitered, but once we started looking at pictures of other wood counters, we realized that the mitered corners actually look kinda silly in a lot of cases and having the two straight-cut chunky pieces butt up against each other looks so so so much better. And of course, it’s a lot easier to cut too!

They Really Make a Kitchen Come to Life

In the end, I’m really glad we went with the wood counters instead of the granite. I love love love my granite counters in the bathroom, but I think they would have made the kitchen look a little cold and sterile. Having so much wood right front and center in the room really gives it a warm and welcoming feel and our kitchen really does feel like “the heart of the home” now with our new wood counters. And you can see that they play nicely with our DIY wood folding counter in the laundry room and our big farmhouse table too! 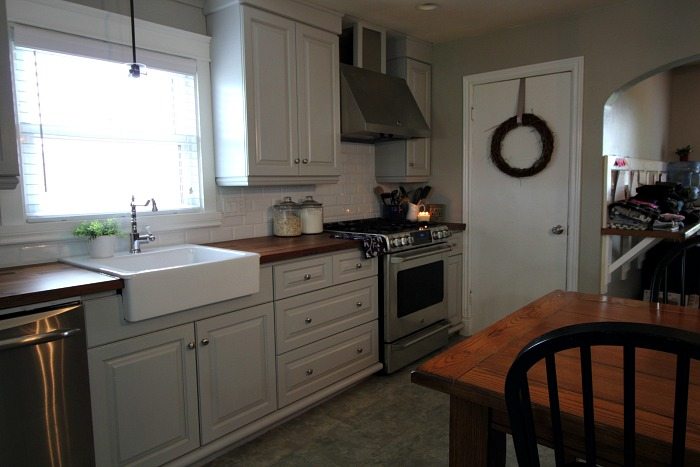 I hope you found some of these thoughts/tips/ideas helpful today if you’re in the market for some new wood counters of your own!

*Update* We’ve had these counters installed for over three years now! Check out my update post to see how they’ve held up!