So, what’s been going on in that potentialful front hall of mine that I’ve been working so hard on? Is it done? Is it almost done?

You just won’t find it here!

Instead I offer you this: 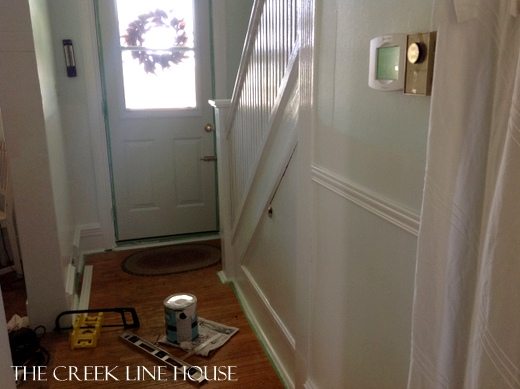 It’s in pretty much the same state as what I showed you last time. Only messier!

You see, I’ve been trying to get some progress happening. And there has been some. 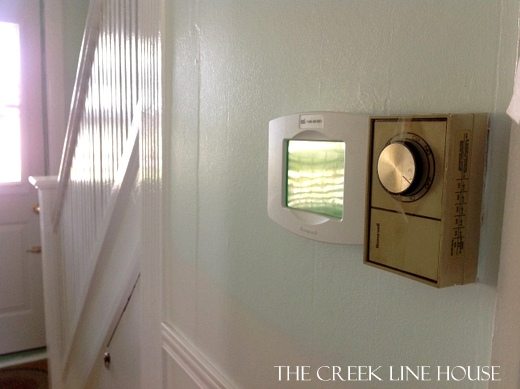 I did manage to put up that little bit of chair rail there all on my own. Actually, no, it’s not really up. It’s mostly just cut to the exact size so it wedges in between the other two pieces of vertical molding.

All the other pieces that need to go up involve me learning how to use new power tools. And I can. I have no doubt that I can. The problem is that to figure all that out and then get working and get some installation going on would take pretty much a whole day. Or more. And then I think I’d feel guilty for all of the other things I’d miss getting done during that time. Yup, I over-think things. So I haven’t yet. But I might. Or Chris may just do it in “20 seconds” like he says he can sometime this weekend. 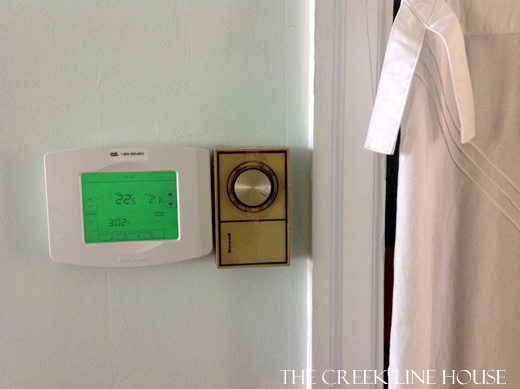 I did get a new thermostat though! It’s something I’d been meaning to do anyway while I was working in this hall and I ended up getting it for free through the hydro company. Isn’t it pretty? OK, well it makes me happy at least. Now if I could only figure out if and how we can rip down that ugly non-functioning humidity controller thing beside it.

So there you have it, my friends! It’s not much, but progress is progress, I say!