Sharing my favourite Sunday Morning Cinnamon Rolls Recipe today! This recipe happens to be plant-based, but feel free to use whatever non-plant-based substitutions you like instead.

I’ve mentioned before that I decided to learn how to make cinnamon rolls a few weeks ago and I’ve started making them every Sunday morning. I’ve really fallen in love with the whole process. Of course, I love the idea of such a comforting weekend tradition, and it’s so great to know that I can now make something that I previously thought would be really difficult or time-consuming, but also, making the cinnamon rolls themselves is just a really enjoyable process. I love how this way of making them is less about an exact recipe and a little more intuitive. Once you know the process, there isn’t much measuring needed. You just grab your ingredients and get started. It’s the perfect relaxed weekend activity. So here’s the recipe for my Sunday morning cinnamon rolls! 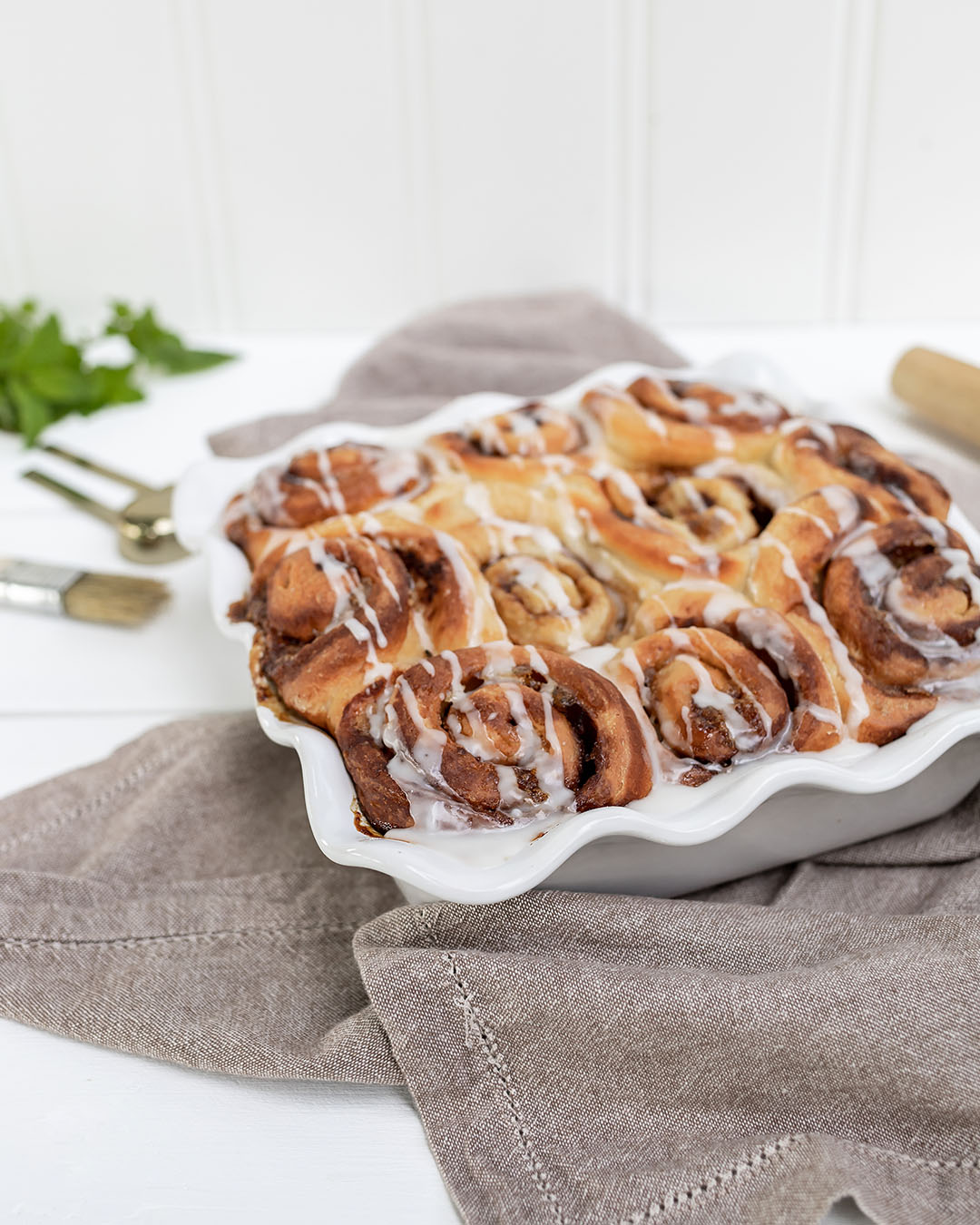 If you’ve been following along, then you know that this is the ruffled baking dish that I’ve been dreaming of as my perfect cinnamon roll dish and finally ordered recently. As you can see, it is indeed perfect! 🙂

So simple. So good. 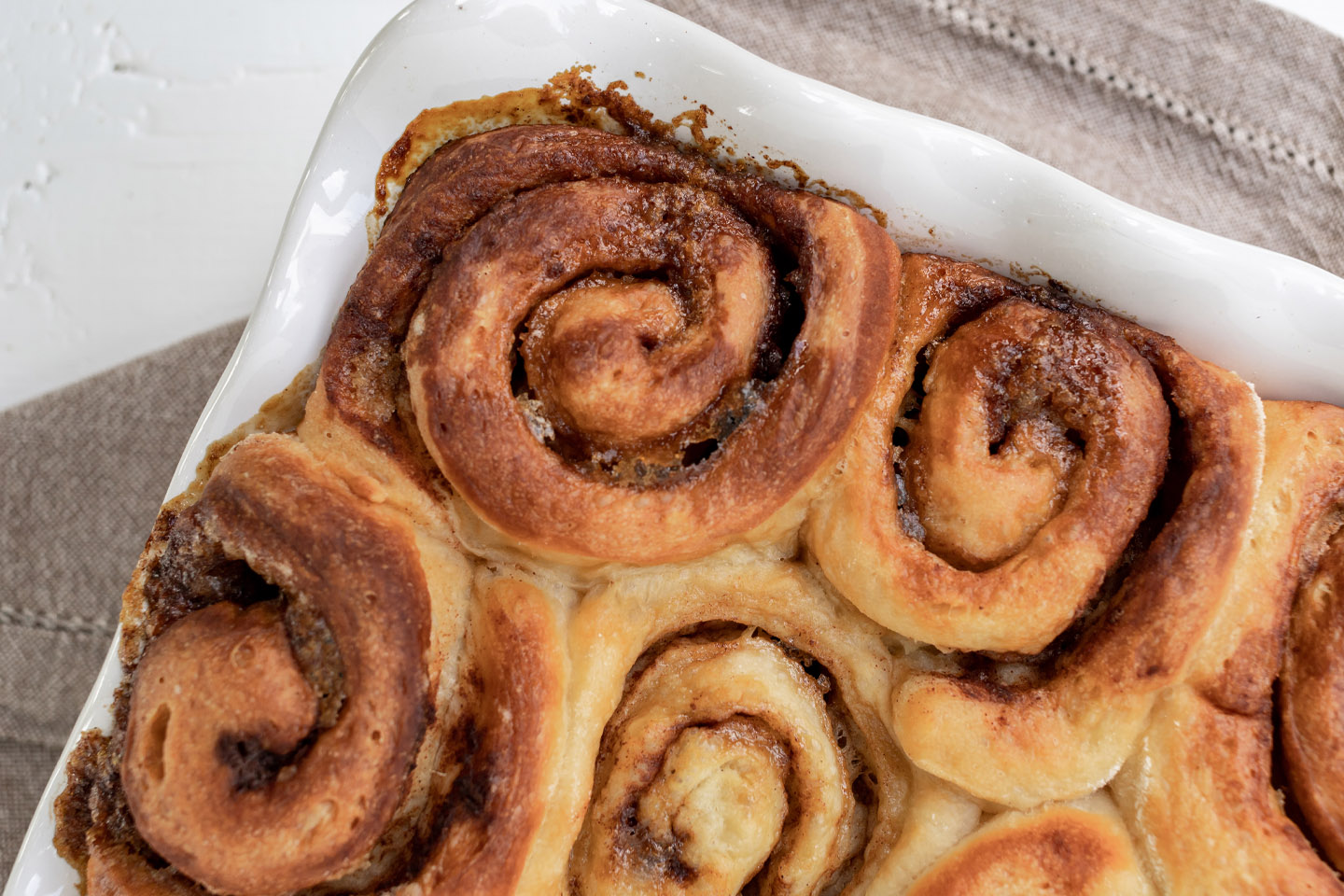 So, when I finally decided to go for it and learn how to make cinnamon rolls, I really expected it to be a pretty big, challenging thing. I thought it would be time-consuming, but I thought it would be worth it, because cinnamon rolls are a great thing to know how to make. So you’d better believe I was super surprised to find that the actual process of making the rolls took me no more than 15 minutes (with about an hour of rest time about halfway through). 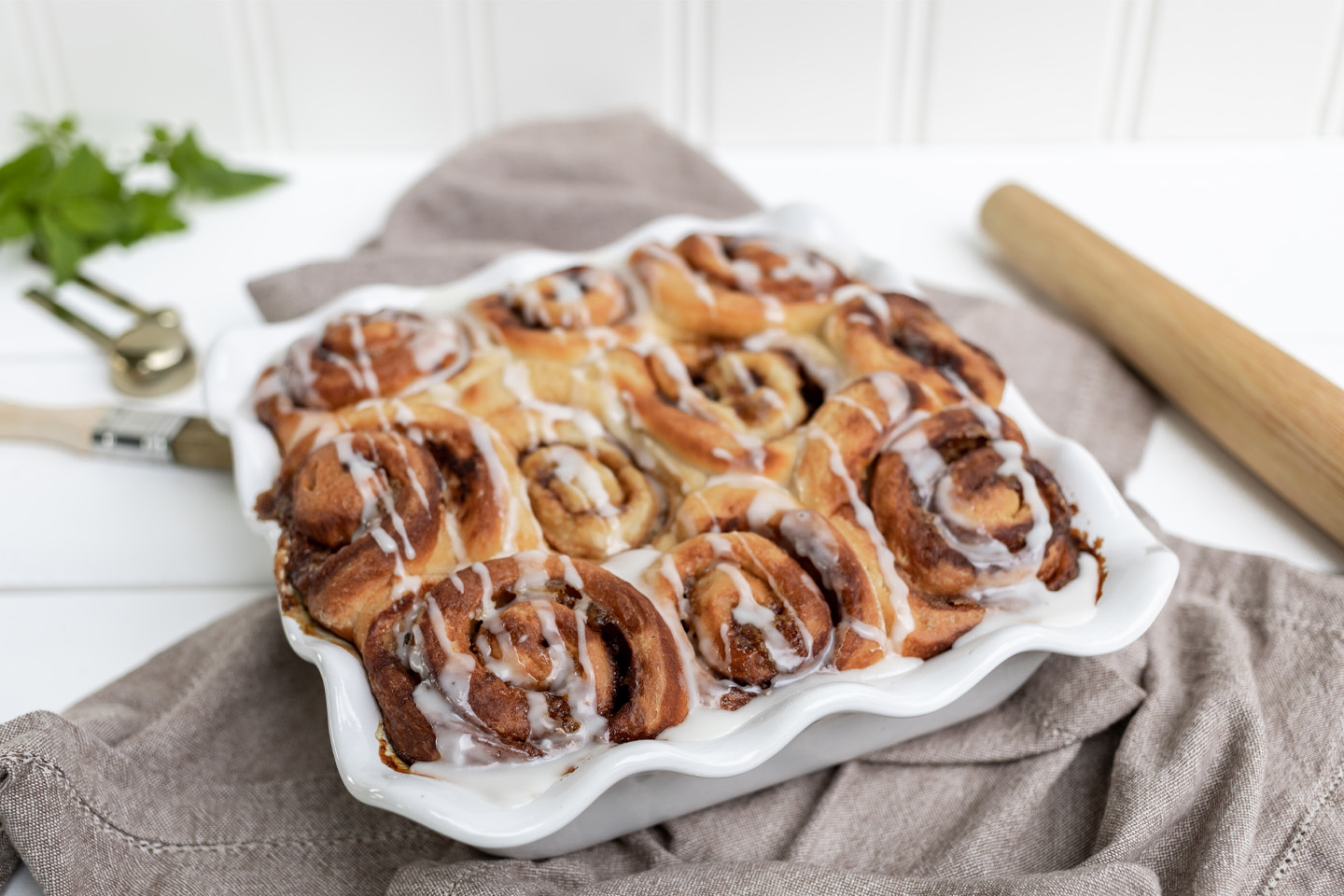 Since these are my official Sunday Morning Cinnamon Rolls, I usually make the rolls on Saturday evening and then just cover them and pop them in the fridge until I’m ready to bake them fresh on Sunday morning. Is there any better smell than cinnamon rolls baking first thing in the morning? 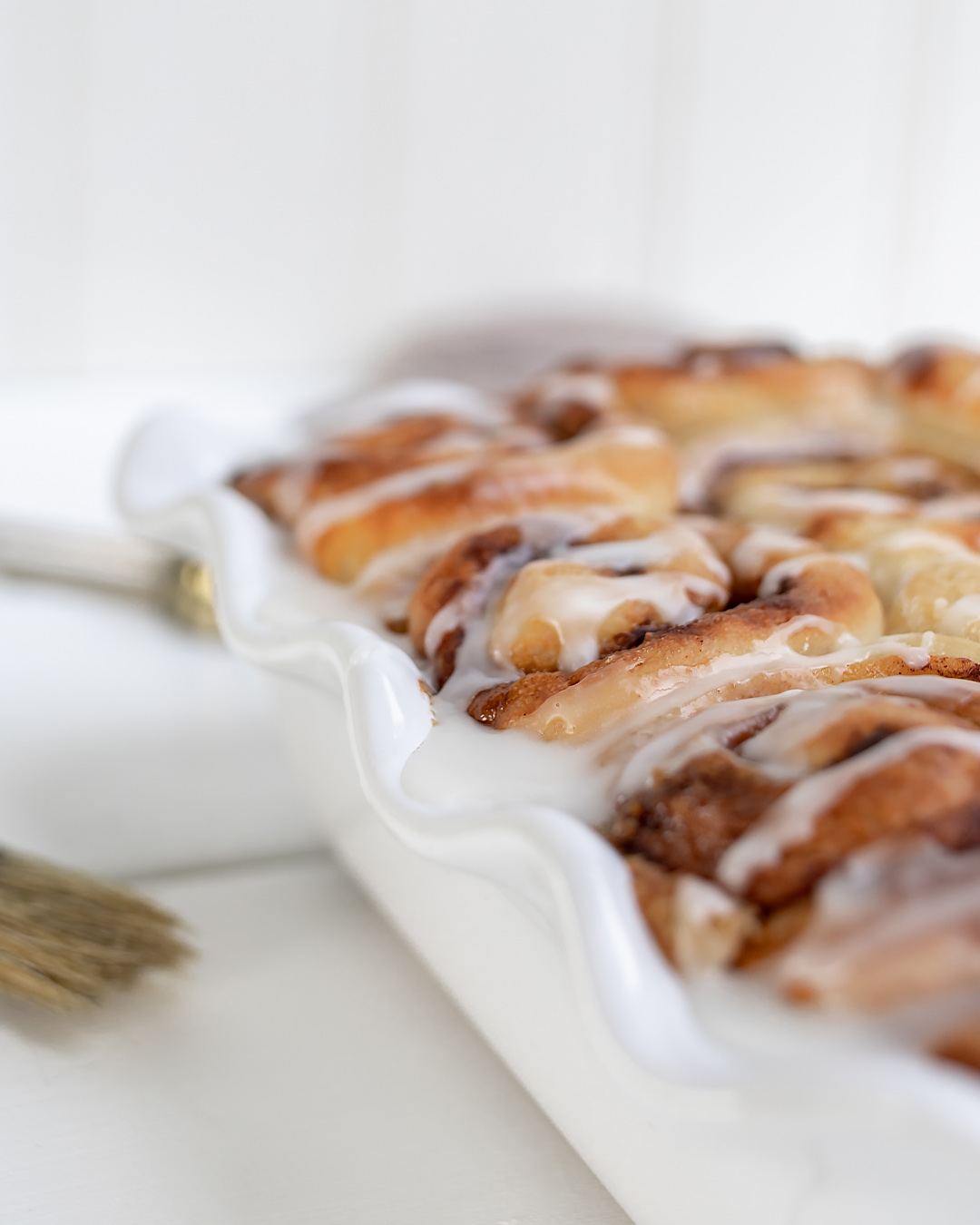 I love how once you know the process for making these, you barely need a recipe and you almost don’t even need to measure anything. It’s just a beautiful thing. Here’s the full printable recipe! 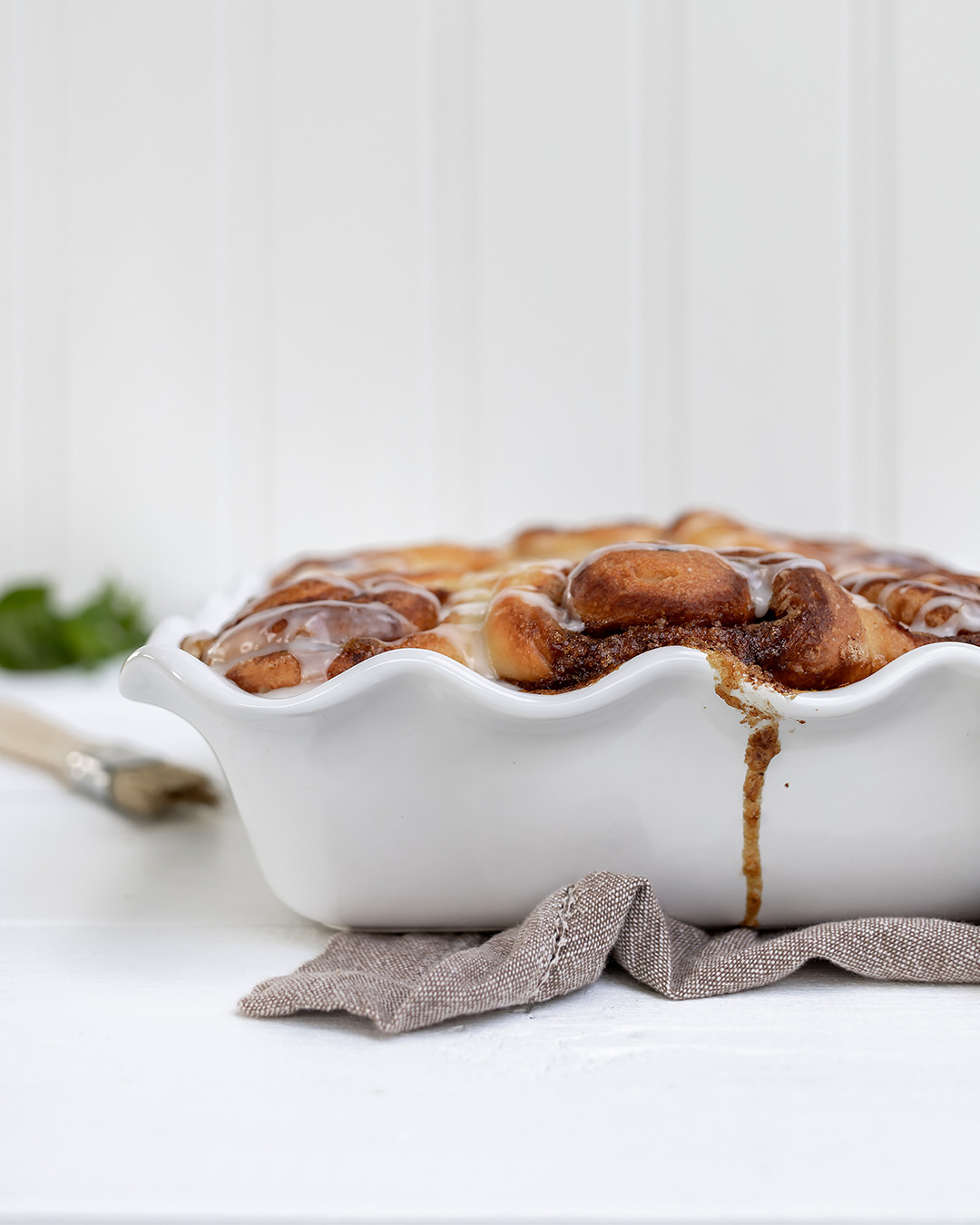 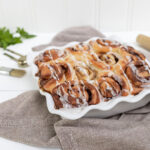 Sharing my favourite Sunday Morning Cinnamon Rolls Recipe today! This recipe happens to be plant-based, but feel free to use whatever non-plant-based substitutions you like instead.