Front load washers are great for a lot of reasons, but they can also come with their challenges. Today I’m sharing our experience with our front load washer and dryer so you can make an informed decision if you’ve been thinking of purchasing new laundry machines.

I’ve been meaning to give you a little update on how things are going with our new front load washer since we installed it about a year and a half ago. I’m glad I waited this long actually, because I feel at this point I can give you my real, fully-informed opinion to maybe help make your decision a little easier if you’ve been considering buying one. I definitely read a whole lot of pros and cons about front load washers when I was trying to decide what pair of laundry machines to buy so hopefully I can help bring a tiny bit more clarity to the situation for some people.

I think the biggest concern that we all hear about front load washers is that they can start to develop a bit of a mildew-y stink after awhile. I’ve even heard stories of people having their clothes smell worse after running a load of laundry. In most cases, the smell comes from seemingly simple ways that people are using their washer incorrectly and they’re easily fixable. Using the right HE detergent is important because front load washers use so little water. If there’s too much detergent, it won’t get rinsed away and will actually trap things like dirt and tiny skin flakes to the fibres of the clothing and the internal workings of the washing machine. You can see how that might start to stink after awhile.

I’ve been really successful in keeping my washer completely stink free by using an HE detergent, running a load of laundry almost everyday to keep mold and bacteria from having a chance to grow, and by keeping the door slightly open most of the time to increase air circulation. The good news is that you actually only need to have the door open a sliver, so it’s almost totally unnoticeable. By taking just a few small, simple steps, you can totally avoid the stink issue.

We actually went through two sets of new front load washers and dryers before we ended up with this set we have now. The first pair we bought were actually much fancier than these (although these are still pretty fancy in my opinion!) and had the biggest capacity of any of the washer/dryer sets in our local appliance store. We were just so frustrated with our old washer/dryer being on the fritz so often that we just wanted to buy the best set that we could and be DONE with laundry problems.

Well, as luck would have it, of course we ended up having trouble with those first two sets as well. They ended up being defective (they were from a different brand than these) and we had all kinds of appliance tech guys out to look at them. No one could figure out why they were acting up so back to the store they went! We ended up going with this set because we’ve known people who’ve had really good experiences with this brand of washers and dryers. I was sad to lose that huge capacity of those super fancy machines, but I thought I’d still probably do OK.

As it turned out, I was still blown away by just how much I can fit in these machines compared to our old ones. They definitely help me breeze through my laundry every day, even on days when we have an emergency load of blankets to wash after a  juice spill or something like that. 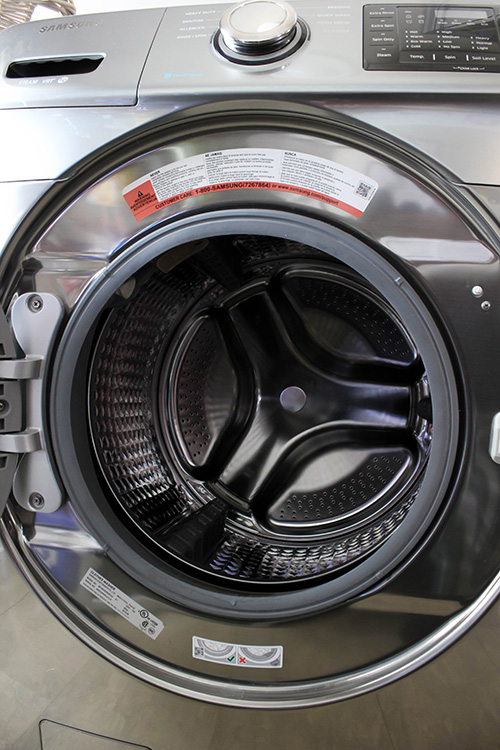 They Aren’t Really That Much Quieter

If you’ve ever replaced an old dishwasher, with a new high-end model, then you know the difference in the amount of noise that they make. You go from needing to leave the room when the dishwasher is on, to being able to carry on a conversation at a whisper while standing right next to it. This isn’t like that. Our new front load washer makes pretty much the same noises that our old top-load washer did. The only exception is that our new front load washing machine doesn’t get unbalanced and make the load banging noise that our old washer did.

On occasion, heavier blankets can sometimes get tangled up into a ball and end up thumping around in the washer, but it’s not quite as dramatic as an unbalanced load was in the old top-loader.

Honestly, the way that the doors open on our new washer and dryer isn’t ideal. They both open in the same direction, rather than facing toward each other so we can’t easily move the laundry from the washer to the dryer without having to go all the way around the washer door, or close it to get it out of the way. On some models, you can actually adjust which way the doors open, but on ours, you can only adjust the dryer door. Definitely think about which way you need the doors to open and inquire about how easy it is to adjust them when you’re considering front load washers and dryers. 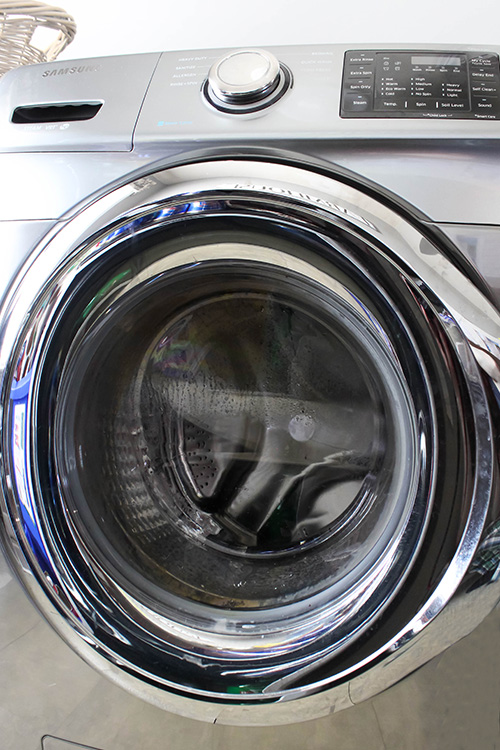 This obviously will be more important to some people and less important to others, but it was definitely a key factor for me. Our laundry room is a little nook right off our kitchen so we end up looking at them all day. I know it sounds weird to have your laundry room in your kitchen, but it’s actually super convenient and I love it. I just tell myself that it’s very English. Everytime I see a house from England on HGTV, they always seem to have the washing machine in the kitchen instead of a separate laundry room somewhere else in the house. 🙂 Anyway, I love the way the front load washing machine and dryer look and they were really a big upgrade to the room visually as well as functionally. 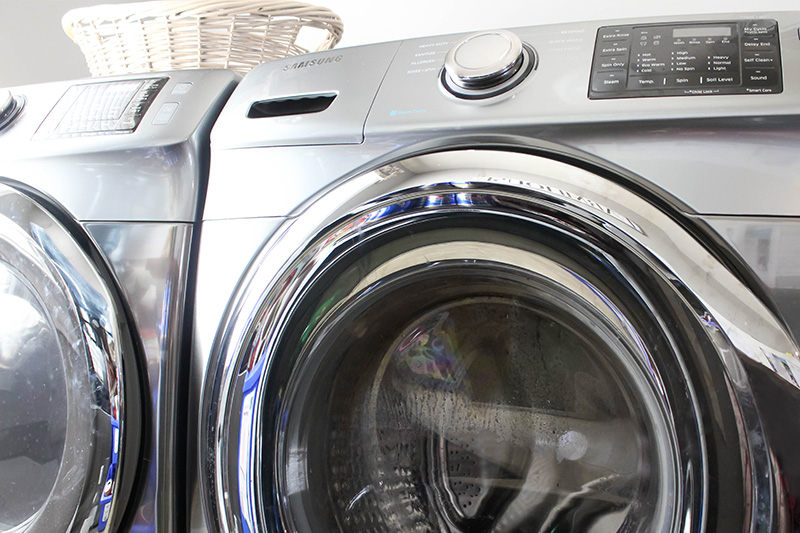 They Require a Bit More Maintenance

Front Load Washing Machines do require a bit more maintenance than top-loaders. First of all, because of the possibility of developing a stink in the them in some situations (if you aren’t using them correctly at all times), it’s a little bit more imperative that you run a regular cleaning cycle. There are products made just for this purpose so it’s a pretty easy process, but it is still one more thing on your monthly cleaning list.

You’ll also need to keep a really close eye on the area where the water drains in your washer, especially if you have pets. Fur and hair can tend to clog up the drain (just like in your sink or bathtub) and it needs to be cleared out regularly or you’ll get an error message. Front load washers also have a lower trap that needs to be cleaned out every 2 months or so. Ours is a little finicky and can results in water all over the floor if we aren’t careful, but this collects a lot of fur and debris as well and results in an error message if it gets too clogged up.

One other thing to look in to: The tops of our machines are made from a metal that’s much less durable than the fronts and that scratches really easily. These machines are really meant to be installed with a counter running over them, which we haven’t done yet. Anytime we put anything on top of these machines, even just a laundry basket, they get scratched. We put a tea towel down to rest our laundry baskets on and the problem is solved, but definitely pay attention to this area. If you’re putting your machines into a room where you won’t be installing a counter over them, pay close attention to the material that they’re made out of on all sides.

So that’s my experience with my front load washer so far! Do you have any points that people should consider to add?