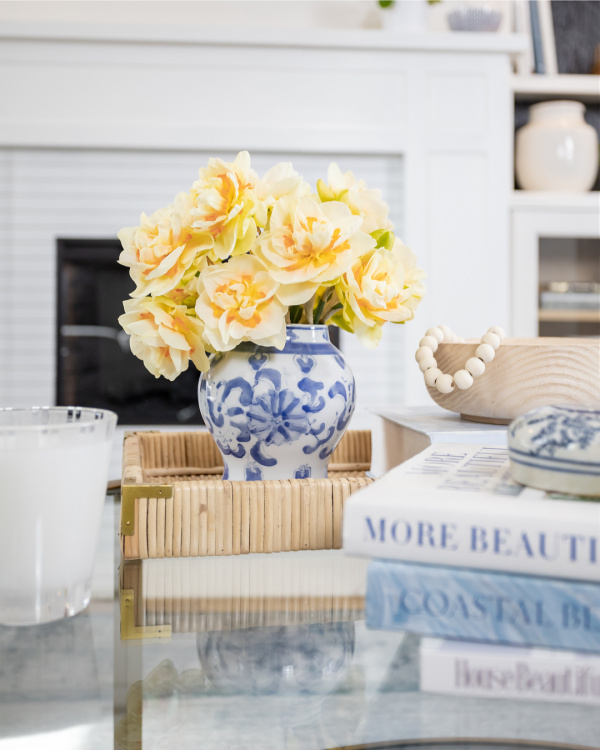 More little updates from my world! Hope you’ve had a great week so far, and if not, I hope your weekend is looking a lot better. 🙂

There’s nothing I love more than a big hole in the side of our house. That sound like sarcasm, but I’m finding it’s actually true. Every time Chris replaces a door or window, or adds more windows in, not only does it look much better, but they always function so well and that area of our house is always so much less drafty after he’s done. We had a big hole in the side of our house earlier this week while Chris was getting ready to add in our last two windows for the back stairwell project we’re working on and it just had me feeling so excited about how this previously useless space is going to become comfortable and beautiful. I actually already find myself thinking a silent little “yay” when I have to change the kitchen garbage because the new door back there is so nice and clean and open and closes so smoothly, where you really had to lean in to the old one. The whole back patio already feels so much cleaner and more welcoming, even though we keep the garbage cans back there right now. 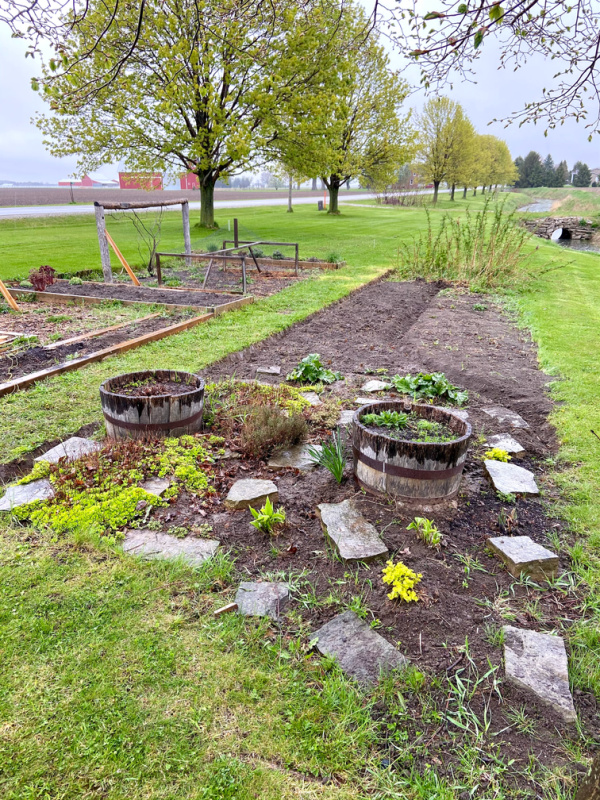 We made some amazing progress in the garden(s) this past weekend and it cost me absolutely nothing. I can’t get over the joy that splitting perennials brings me. Last year, I decided to re-locate my perennial herb garden to the far end of the garden because the little tree that we had growing at the corner is suddenly not so little. I decided that this year I would fill in that old perennial herb area with some shade-loving plants, just so that it would be pretty and I could enjoy it when I look out the mudroom window. I thought I’d start out by just splitting a few existing mature hostas here and there and putting them in there, and I guess I didn’t realize just how many I had to work with already because I ended up filling in quite a bit of space with some of my favourite varieties and I think it’s going to be so beautiful in a month or two. Then I was inspired to add in a little bit of bright chartreuse Creeping Jenny as well to offset the darker green and blue-green of the hostas I added, and of course I had plenty of that to work with after my Creeping Jenny planting adventures last summer. So now I find myself with just a few areas to add in some fun new plants and I’ll have a really nice, lush shade garden, just like that. I’d love to find some Soloman’s Seal, but I never seem to come across it when I’m looking for it. Anyway, it was exciting to make some real progress so early in the season, without every having to leave our property or spend a penny.

We’re getting a new air conditioner and furnace and I’m actually kind of thrilled. A part of me always feels like it’s lame to spend so much money on home improvements that don’t improve anything visually, especially since I love to share pretty and useful home projects here on the blog as much as I can, but these boring, necessary home projects also just make me so happy. I love the feeling of doing a good job of taking care of our home and our family and these types of projects just really do that for me. They’re expensive, but they’re always so worth it. 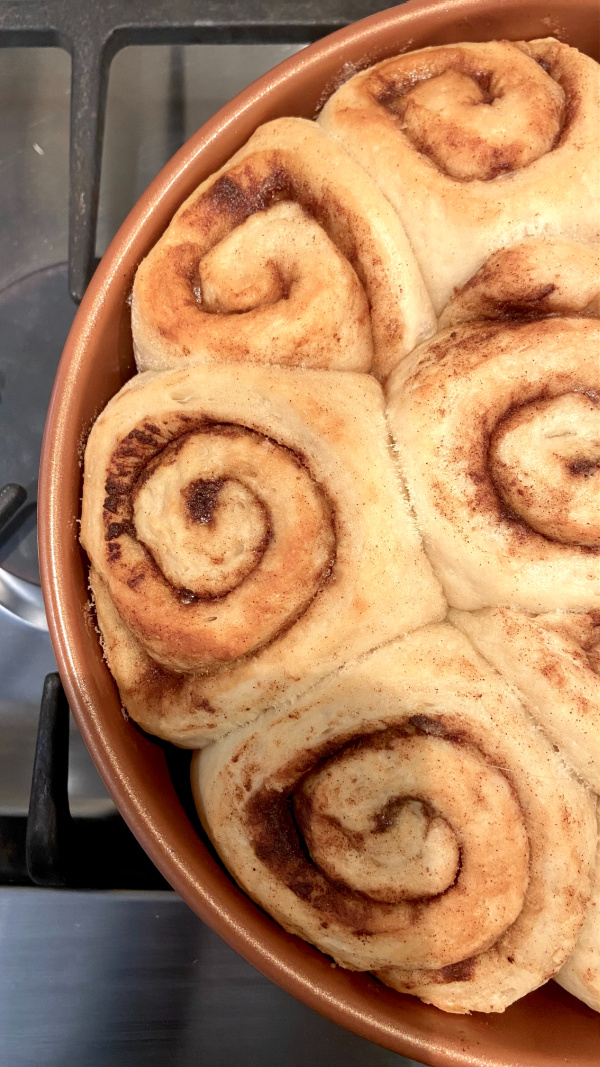 I’m officially introducing cinnamon roll Sundays in our house. Is there anything more joy-inducing than the smell of fresh cinnamon rolls? I don’t think so. Now that I’ve discovered that I can make them with a pretty good degree of success, I’ll definitely be making them on a fairly regular basis and Sunday morning just seems like the perfect time. I’m perfecting my recipe a little bit and then I’ll be sure to share it. I’ve been using this round Gotham Steel baking pan that Chris got me for Christmas and it’s worked out really nicely. It cleans out well without any of those delicious crusty bits of sugar and cinnamon sticking to it, the reviews don’t lie. 🙂 I do have my eye out, though, for the perfect cinnamon roll pan that will elevate the whole experience just a little bit more and I think I may have found it. This white ruffled dish would make me so happy to put on the breakfast table on Sunday morning, but I also found this one, which is from the same company, but looks a little different, and I think I might like it even more even though it’s mysteriously quite a bit cheaper.

White ruffled loaf pan, which is related but not appropriate for cinnamon rolls, and which I’ve been dreaming of for about a year now. Ha!

Remember the new white all-weather square planters (similar here) I bought a few weeks ago? I decided I’d better get moving on finding some inexpensive planters to actually go inside them so that I can plant them up in a few weeks and I found something even better than what I was looking for. These planter bags have all kinds of rave reviews on Amazon, they’re super inexpensive, and they have handles to easily move your filled planters out if you want to switch them out between seasons like I do. Apparently plants actually prefer to grow in them compared to regular plastic grower’s pots because they allow more air flow to roots and they’re softer and move a bit when roots grow up right against them. So excited to try them out! They came in already and they look great! Just a note: Really pay attention to the diameter of the size of grow bag you’re buying. I assumed that I would need at least the 10 gallon size because my planters seem pretty large to me, but the five gallon size is actually perfect for my square planters.

OTHER NEWS WORTH MENTIONING

-Speaking of side porch improvements, you know how much I love these nearly indestructible LL Bean Waterhog mats and I ordered this crescent-shaped one in khaki to go between the two square planters. I feel like the crescent shape just adds a little something special, just like how I insisted on the finials on the planters. 🙂 I love my washable cotton rugs in the summer, but they just won’t do in this high-traffic area in the winter, so I’m hoping this will be a long term, year-round solution.

-Completely random, but I can’t not mention this: If you find yourself in need of boys’ shorts for your sons or grandsons, I’m pretty sure these H&M boys shorts are the best on the market right now. I always find that little shorts get so wrinkled and sloppy-looking right out of the wash for some reason and I just can’t stand them unless they’re meticulously-ironed, which of course doesn’t always happen. These lightweight poplin shorts look great right out of the wash in a casual-yet-presentable kind of way and they’re incredibly affordable. Jack still has his from last year and they’re his favourites so I ordered more for him this year in one size up and they’re just as great.

-I’m crazy about these black Windsor-style patio dining chairs (and the price) from Target. Such a classic. Target, why did you have to leave us here in Canada??

-We’re almost halfway through our quest to do a little every month in preparation for a stress-free Christmas! I’m working on another checklist to put out early in May, but you can get caught up in our Monthly Christmas Countdown Archives here. We’re doing a few (3-5) little tasks each month and working towards making Christmas preparations a little easier this year when November and December roll around. Feel free to join in now if that sounds good to you!

-The apple trees are just coming into bloom! We don’t usually have a lot of luck with these trees but things are looking pretty great so far for this year!