If you’re going to be heading out into a forested area with lots of low-growing greenery, definitely make sure that you know how to identify poison ivy so you can protect yourself and your family.

I grew up in an area where poison ivy wasn’t really a threat, so I wasn’t very familiar with it at all until pretty recently. Of course I had heard of it, but I’d never actually seen it in real life. I don’t know what I expected, but I think I at least thought that it would look like some kind of evil plant. In fact, it looks fairly innocent and very much like a lot of other plants that grow around it. Where we live now it’s pretty common, so I’m happy to say that I’m comfortable in my abilities to both know where it’s likely to be growing, and to recognize it when I see it. If you’re a little unfamiliar with this plant, it’s worthwhile to learn how to identify poison ivy because there’s a good chance that you’ll run into it at some point!

My advice to you is that if you’re ever going to come into contact with poison ivy, do it when you’re young. 🙂 Jack (our five year old) had it four times last year (four!) and it was pretty amazing to see how quickly he recovered from it compared to when an adult gets it. He picked it up when we weren’t around and the adults that he was with weren’t totally sure what poison ivy looked like. It took us awhile to figure out where it was coming from, but we finally got to the bottom of it by the end of the summer. Fun story: At one point he had made himself kind of a big hat out of it and said that he was dressing up as a blackberry bush. His poor little face was pretty uncomfortable for a week or so after that! That’s obviously when we figured out exactly where he picked it up. 🙂

If you’re older, or if you’ve had poison ivy multiple times in your life, the rash can end up lasting for a few months rather than a few days or weeks. That is definitely a recipe for a ruined summer and something you need to avoid if at all possible!

If you’re looking for some relief from poison ivy, my friend Sarah from The Project Pile has had multiple run-ins with it and shared a super detailed account of all of the different things she tried on it and how well they worked. You can read all about it here: Poison Ivy Relief Methods – Tried and Tested.

How to Identify Poison Ivy

I had actually seen these faux plant examples before, but didn’t really feel comfortable identifying poison ivy until I actually saw it growing in the wild for myself. It really does look exactly the same though in real life! 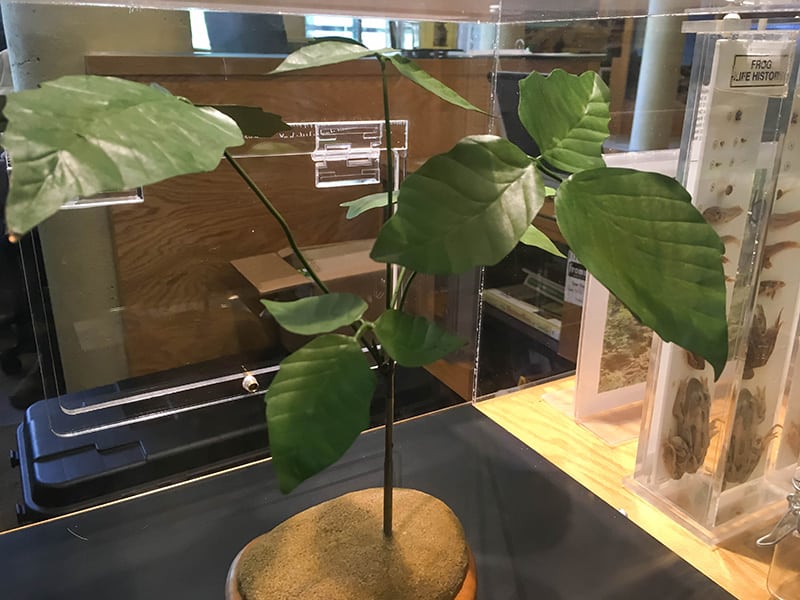 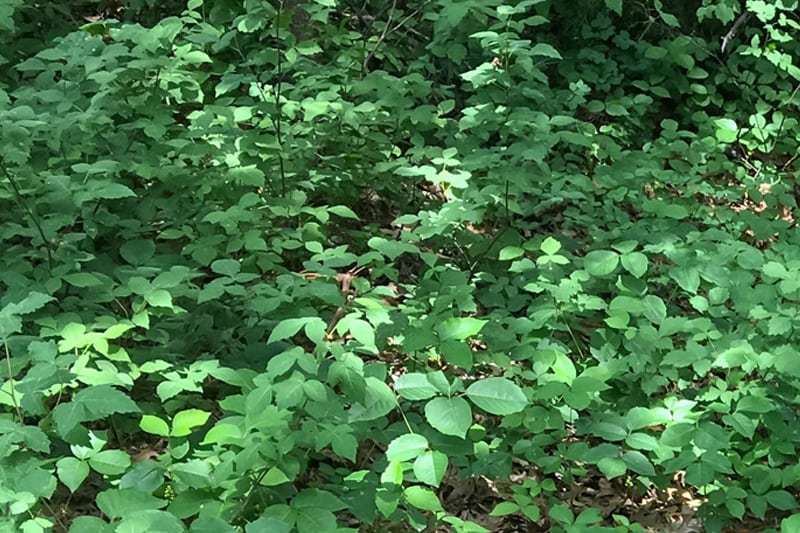 Here’s a photo of the area around the campsite that’s been our favourite for the last few years. This is exactly the kind of low-growing greenery you want to be on the lookout for. This particular area is actually about 50% poison ivy so we definitely stay well away from that side of the campsite! 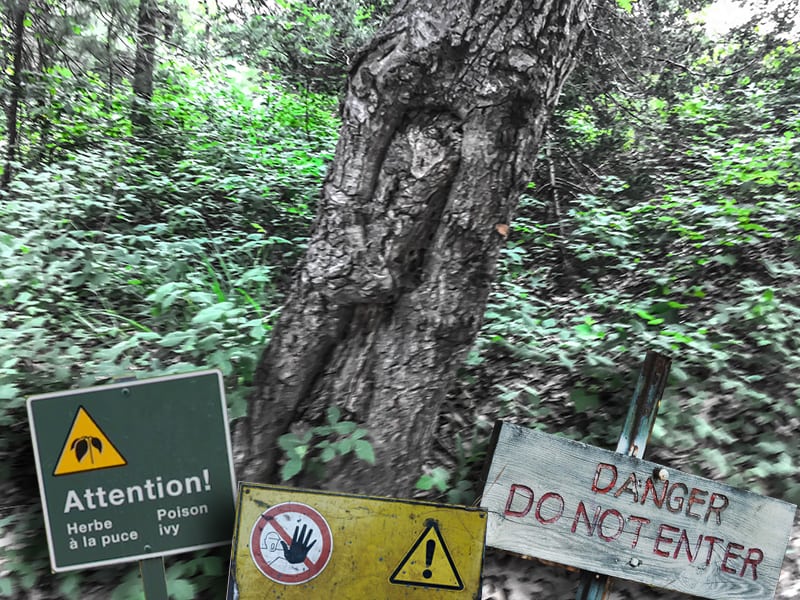 Of course, most of us have heard the saying “leaves of three, let it be”, but there are a few different plants that have leaves that grow in threes like poison ivy. Here are the main differences between poison ivy and other similar looking plants:

While poison ivy leaves do grow in sets of three, you’ll see that there is actually a space between the middle leaf and the other two. On other similar plants such as the fragrant sumac we get here, there is no space. The space isn’t terribly noticeable if you aren’t looking for it, but you’ll see that there’s an extra little bit of stem, about 1/4″ long, on the middle leaf on poison ivy. 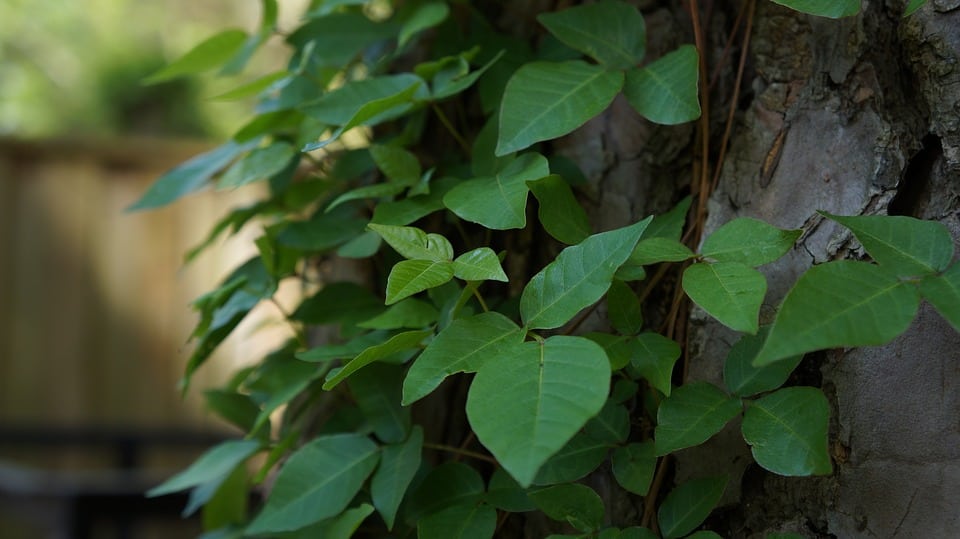 When you see poison ivy growing in the wild, you’ll also see that it’s more of a vine, so it will be growing either along the ground or up another plant or tree. Fragrant sumac tends to grow a bit larger and will grow into a full shrub-sized plant.

You’ll identify poison ivy leaves by their slightly darker color and their smooth, slightly glossy texture. Not super shiny like a holly plant, but they do have a slight sheen to them. You’ll also notice that the two side poison ivy leaves tend to be asymmetrical, with one side of the leaf being smoother and the other side being a little jagged.

I find this little poster that I saw in the visitor’s centre at the park we camp at to be a little misleading actually because I find that it’s the poison ivy leaves that are a bit glossier looking in real life, and the fragrant sumac leaves are not at all as high gloss or as dark comparatively as they look in this picture. 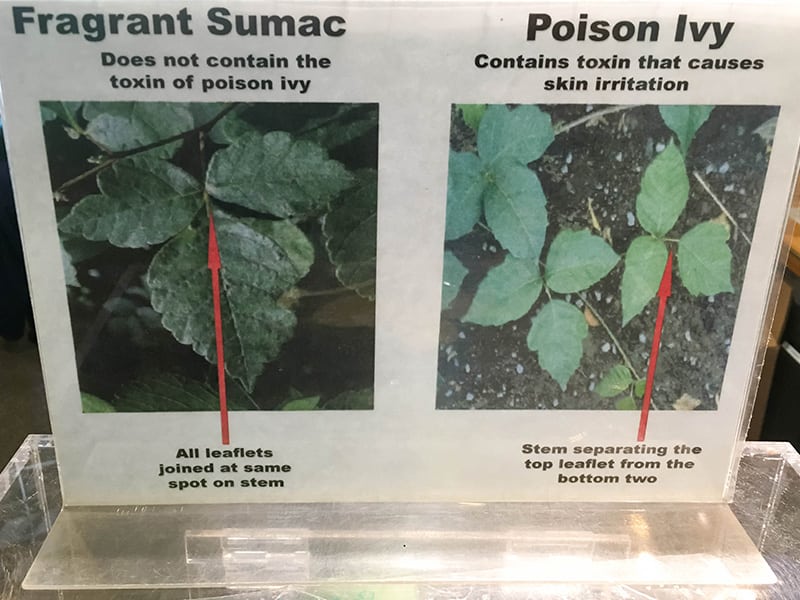 Have you ever heard the saying “berries white, take flight”? Well, if you see white, or very light green berries, you can be pretty certain you’re dealing with poison ivy. It’s better to get comfortable with identifying the way the leaves go, rather than relying on the berries to tell you if a plant is poison ivy because the berries are not present during the whole season, but that’s an extra little bit of information you can use to help you feel certain when you’re trying to identify poison ivy.

Learn to Identify Poison Ivy Yourself

The next time you’re out on a hike through the woods, take a look and see if you can use these hints I’ve provided to see if you can positively identify a poison ivy plant. If you do see something you suspect to be poison ivy – stay away! One method of identifying poison ivy that really doesn’t work is checking to see if you start to get itchy. Poison ivy rashes are very different from other summertime itches such as mosquito bites in that they don’t start to itch right away. In fact, it can take 2-3 days before an itchy rash shows up after you’ve been in contact with poison ivy, so it can be really hard to figure out where you got it from.

Whatever you don’t, do say to yourself “Well, I don’t feel itchy, so there must not be any poison ivy in there.” This is not a good method!

If you do find yourself with poison ivy, you’ll just have to wait it out and allow your body to clear it out of your system, but you can get some temporary relief by using my homemade anti-itch bug bite cream on it. I swear by that stuff now! 🙂

Do you have any other methods you use to identify poison ivy other than what I listed here?