You don’t need an open fire to enjoy this delicious festive treat! Here’s how to roast chestnuts on the stove. Singing of the Christmas Song is encouraged!

Have you ever heard the opening line to The Christmas Song and thought to yourself, “Who actually does that? When have I ever seen someone roasting chestnuts on an open fire?” There are definitely some areas where roasted chestnuts are a lot more common and unfortunately I don’t live in one of them. Last year I set out to fix my little problem of a chestnut-less Christmas and I decided to learn how to roast chestnuts on the stove myself. There are a lot of ways to cook chestnuts, from steaming them to salt-roasting them in a wok, to baking them in an oven, but I decided to be a bit of a traditionalist on this one.

Tools and Supplies Needed to Roast Chestnuts on the Stove 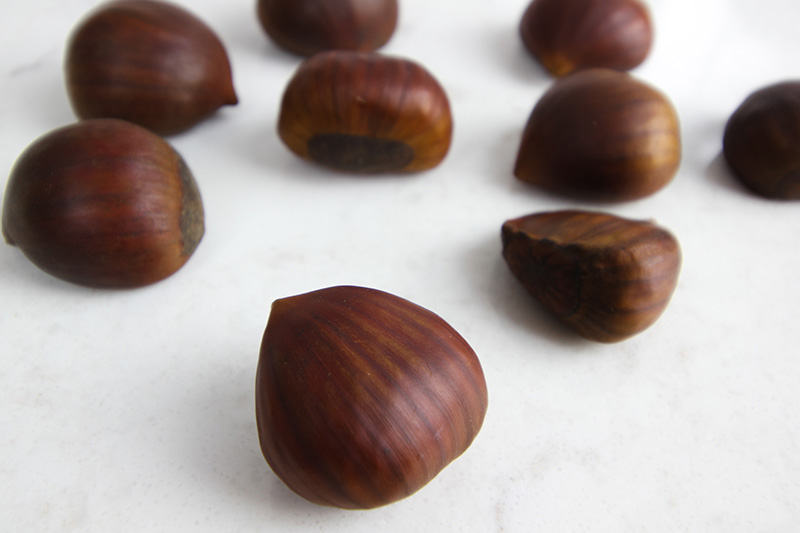 If you have access to a traditional chestnut roasting pan, definitely use it. The holes in the bottom of the pan allow the skins of the chestnut to  get a little extra crisp and brittle, which makes them much easier to peel. The direct contact with the heat also contribute to the sweet, smokey flavour of the chestnuts when they’re cooked. I ordered my chestnut roasting pan off of Amazon, but a cast iron pan will work as well in a pinch.

How to Roast Chestnuts on the Stove: Prepping the Chestnuts

The first very important step is to slice through the outer shell of each chestnut. This prevents your chestnuts from exploding as they heat up, but it also makes them easier to peel when you’re ready to eat them. The skins will shrink back and open up to reveal the chestnut meat inside as they cook and char up a little bit and the bigger your cut, the easier the peeling process will be.

The best tool for slicing through a the shell is definitely a chestnut knife. Now that I’ve attempted this task myself, I can see how the curved design of the blade is perfect for this task. I’ll definitely be putting one of those on my Christmas list!

If you don’t have a chestnut knife, I found that the next best tool is actually a serrated knife. After a bit of trial and error, I found that my bread knife did a really good job and minimized my risk of slipping and cutting myself. 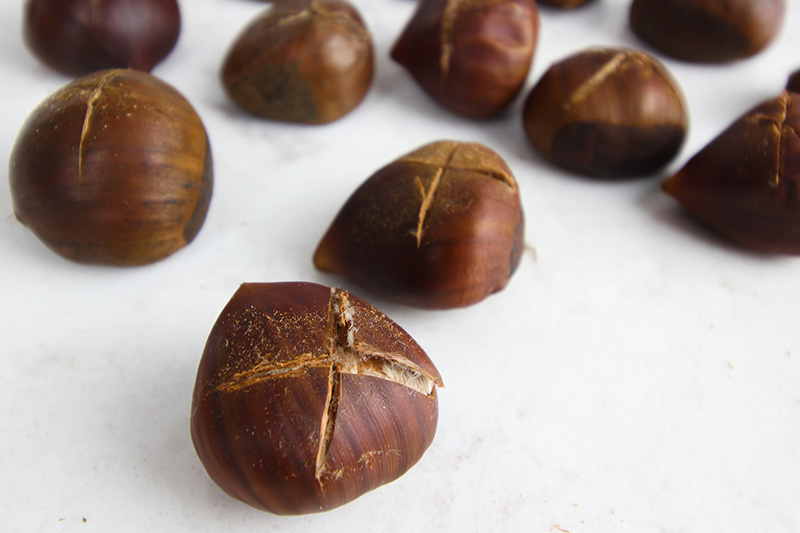 You may run into people who have a strong opinion about what the “right” way to cut a chestnut shell is, but the truth is that you should cut it in whatever way you feel most comfortable. Some people love to do a kind of a clamshell cut running most of the way around the shell and some people just do a little slice at the pointed top of the chestnut. I did a few different types of cuts to test them out and they all did the job. My favourite way to cut them was to make an “x” on the rounded side of the chestnut. I just felt like this was the easiest, safest place to do my cuts.

How to Roast Chestnuts on the Stove: The Actual Roasting Part

I was surprised at how quickly the actual roasting process went. Everything that I’d read and all the videos that I’d watched on this process said that it would take 15-20 minutes for the chestnuts to roast on medium heat. 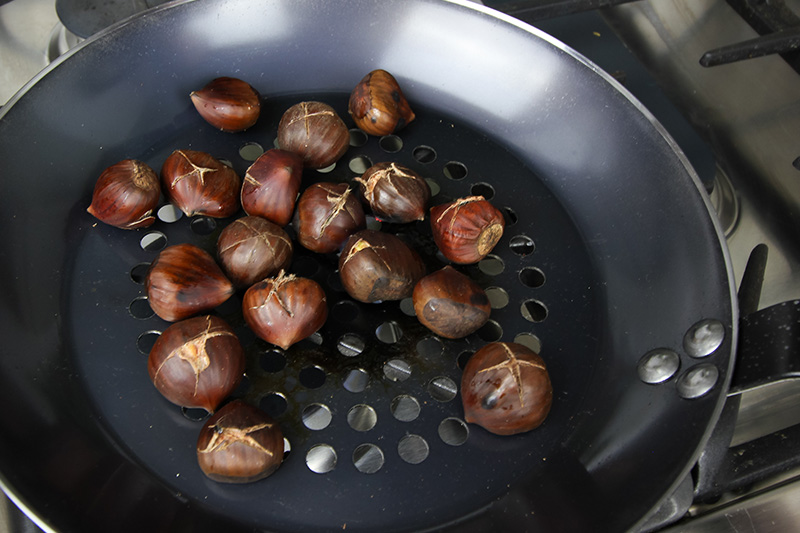 You want to roast your chestnuts until the skins are charred and shrinking back. Mine were thoroughly charred after only about 10 minutes. I also had my stove on low heat because the chestnuts were literally catching fire. You definitely need to keep the pan moving and keep shaking the chestnuts in the pan for the entire roasting time. 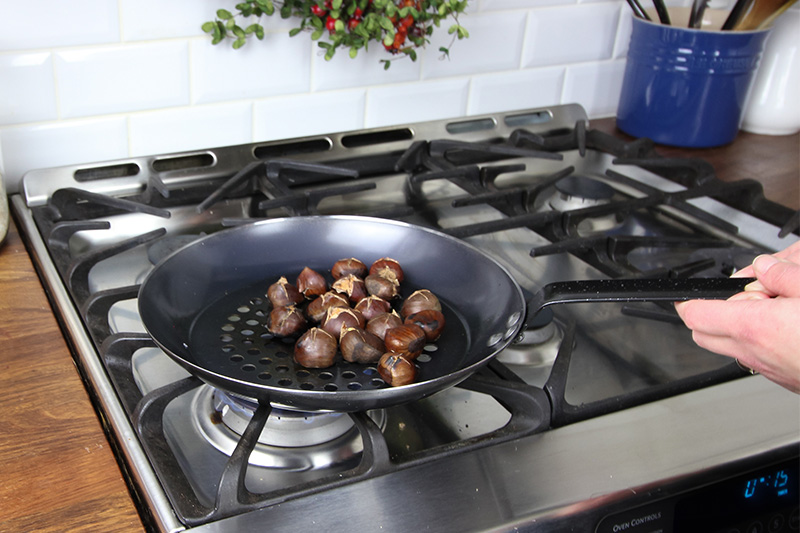 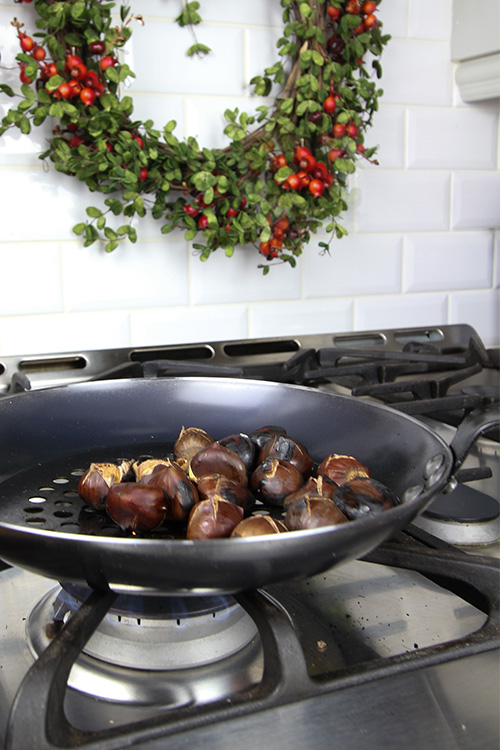 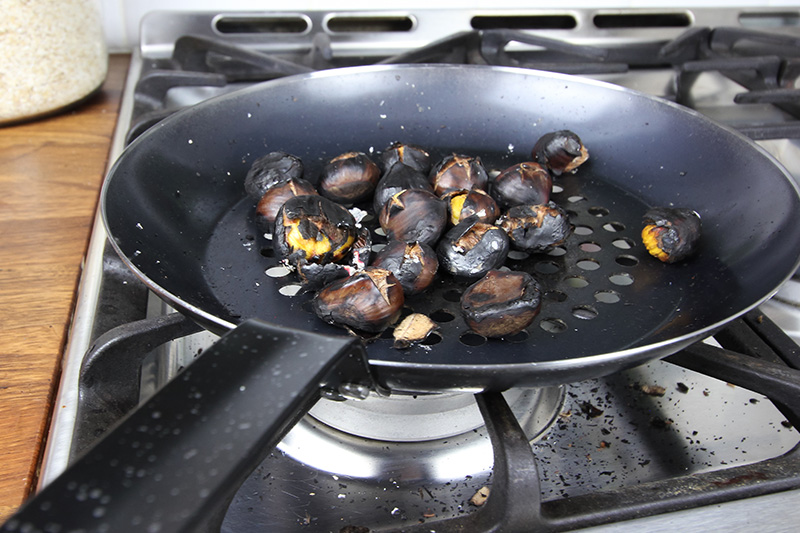 When your chestnuts look done, allow them to cool for a few minutes, them shake them out into a tea towel and fold the tea towel up around them for five to ten minutes. This will allow them to cool slightly and also steam a bit, continuing the cooking process for the chestnut meat inside. 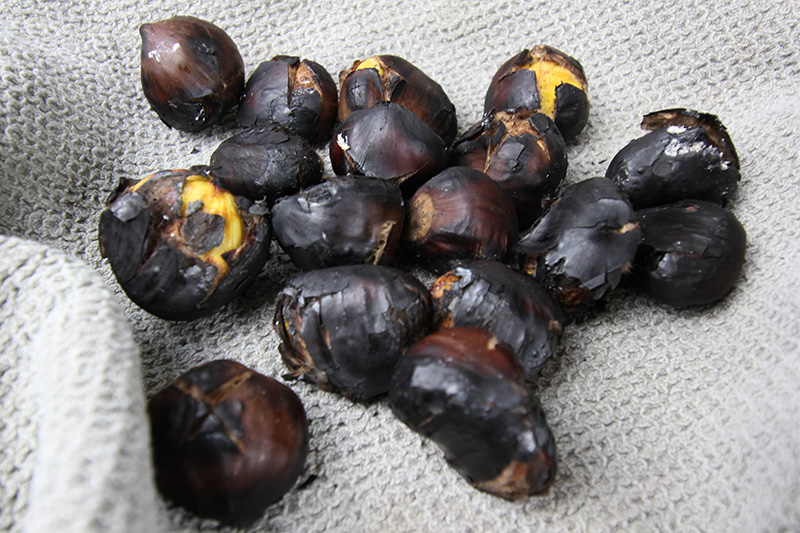 When you’re ready to eat your chestnuts, just crack the outer shells off with your fingers. They should be super brittle and flaky and come away from the meat very easily.

And that’s all it takes to roast your own chestnuts! Of course, you could do this whole project over an actual open fire if you have one going, but you can easily do it from the comfort of your own kitchen as well!

Do you roast chestnuts at Christmastime?