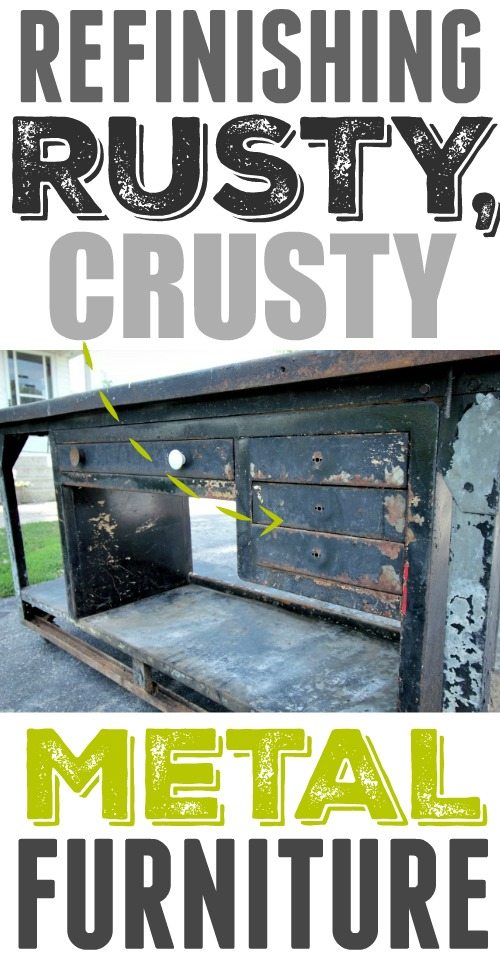 We’ve had this old metal workbench in our garage since we moved in here 5 years ago.  I’ve always secretly thought it had kind of a neat industrial look to it but it was all the way in the back corner of the garage, looked like it weighed about a zillion pounds and it was in really terrible shape. We finally decided that we needed to get it out of there a few weeks ago, so we thought maybe we’d pull it out, see just how bad it was, and maybe refinish it and sell it if it was in nice enough condition. 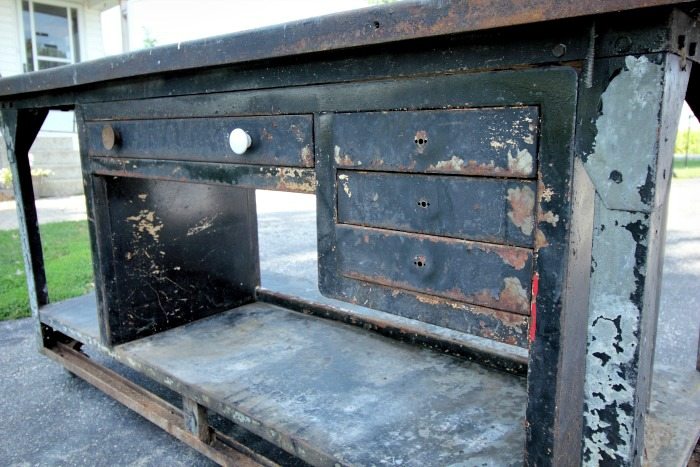 Well, once we got it out of there, of course we totally fell in love with it. I have to say that I wish I had a giant industrial-style dining room, or a big old barn to host events in, because this would make such a nice buffet/serving station all filled with baskets underneath and stacked up with dishes on top. Of course, we’re not using it for that, but it is going to be the world’s best workbench. 🙂

Someone had taped cardboard down on to the top of the workbench at some point so that made us think that the top was really badly damaged, but it’s actually completely fine! The whole thing is really sturdy and stable, and it has wheels on it which roll really nicely. I hadn’t noticed those wheels before so now it’s a totally new ballgame. 🙂

We decided that we could build the long benches along the side of our garage to allow us to push this big metal workbench up underneath of them, and then we can roll it out into the middle of the room when we want a big, open, flat surface to work on from all sides. Can you imagine how easily our projects are going to come together now?

So anyway, enough with the excitement. 🙂 Here’s how we refinished this piece to give it new life!

Of course, we had to start off by taking off all of the old paint. There’s no exact science to doing this, but we used a few different tools to remove everything to the point where we felt like we could repaint.

We started off by using the pressure washer over everything. This removed a lot of the paint, but also all the dirt, grime, and cobwebs that had built up everywhere. We took the drawers right out and gave them a good spray-down as well. 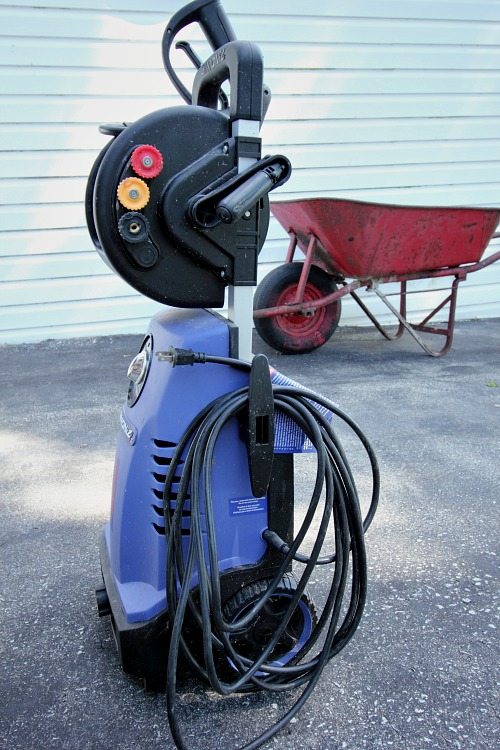 Next we used this wire brush to remove a lot of the peeling paint, or paint that was already half coming off. Make sure you exercise caution when using a wire brush like this! Use protective eyewear and make sure not to have any drinks nearby. These carry the same risks as those metal bristled BBQ brushes that I told you about recently and one reader told me how her nephew had a piece fly off of a wire brush like this in his workshop and go into the straw of his drink. He ended up drinking it and it wasn’t pretty! He’s fine now, but just please be extra careful about these things! They sure do the trick though when they’re spinning away on the drill! 🙂 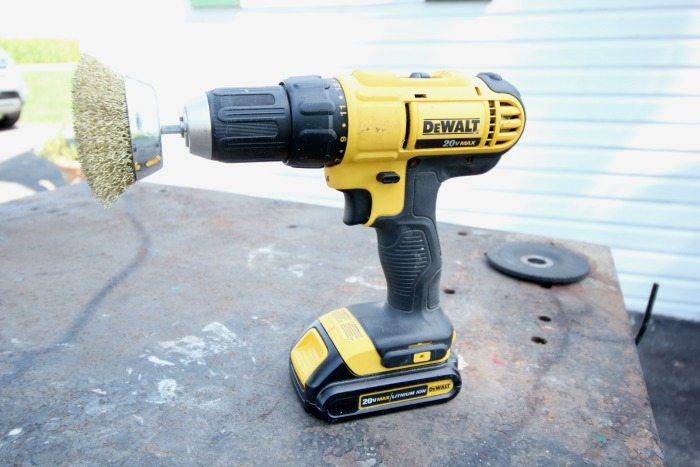 The last tool we used was one of these sanding flap disks attached to our grinder. This really helped us get most of the paint off and created a really nice smooth surface. These sanding disks are pretty neat because they’re designed to be in these staggered layers, so as one layer wears down, it reveals a fresh layer of grit underneath. That’s just smart! 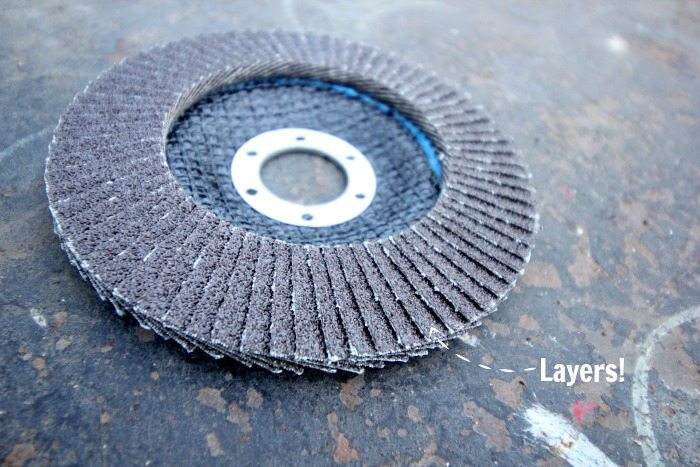 We finished up by spray painting the whole thing with 3 coats of black spray paint. We used this high heat paint because we had some on hand, but also because you never know in a workshop! Anything to make it more durable! We finished up with 2 coats of semi-gloss clear coat to make it a really nice clean, smooth surface to work on. 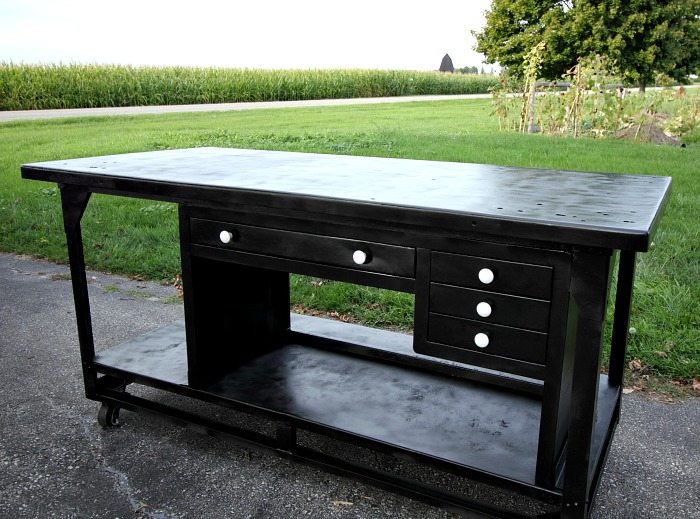 We did the insides of the drawers in oil-rubbed bronze just to be a little fancy too. 🙂 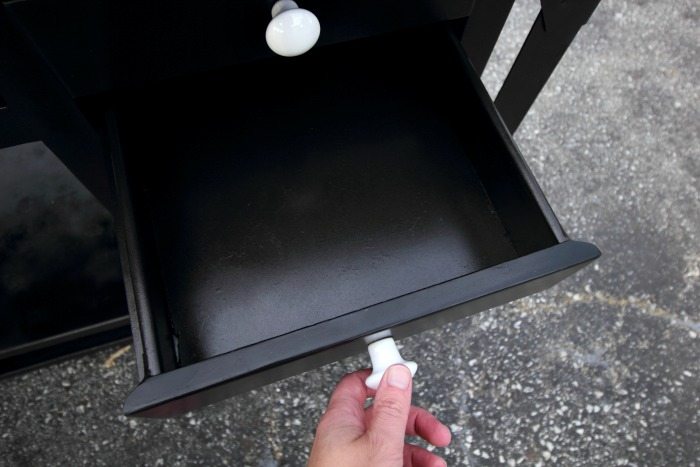 We added some new knobs of course and now the whole thing is ready to go! We haven’t had any kind of large working space like this around our house (other than the kitchen) in the past and we’ve usually just used the picnic table in the driveway if we needed a lot of room, so this is kind of a big deal for us, if you couldn’t already tell! 🙂

You can see that there are still some holes in the top where tools were attached, but that really won’t be a problem for what we’re using this for. You can also see that Jack is never more than 6 inches away from me at any given time if he can help it! 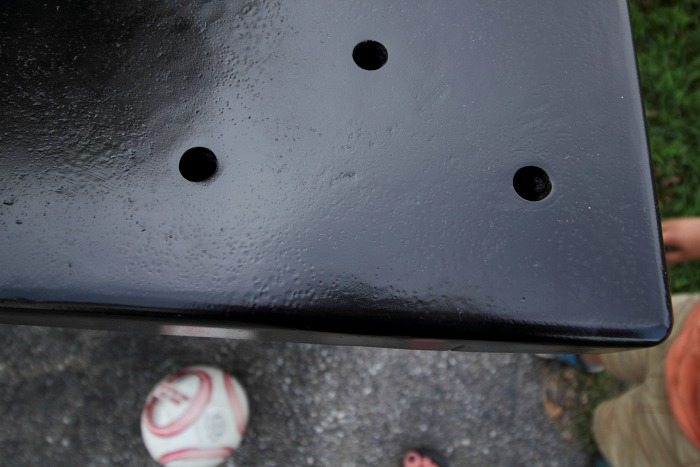 There was quite a bit of pitting in this piece from years of rust and we decided not to worry too much about that. Partially because it gives it a neat, rustic look and partially because everything is so nicely sealed up now that it’s painted that it won’t matter at all when we’re working on it. If you wanted to get a really fresh clean surface, you could keep sanding with sanding disks with finer and finer grits until it’s completely smooth.

We should have the rest of the garage finished and in tip-top shape soon so I can’t wait to show you the rest of our workspace when it’s done! 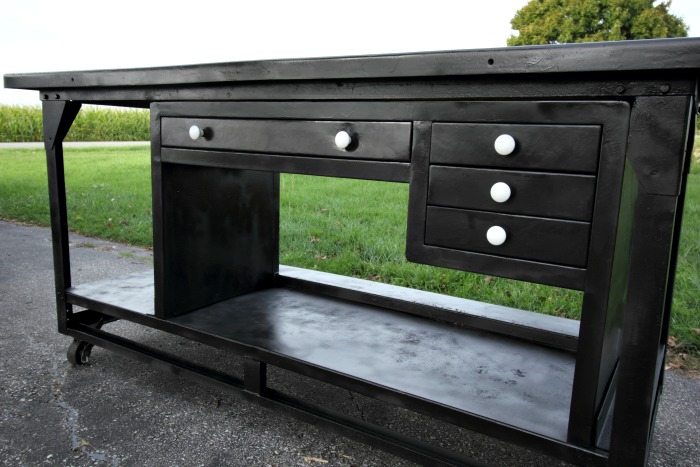 If you come across any old metal furniture that you think has potential, definitely pick it up! It’s easier to refinish than it looks and these pieces turn out so beautifully when you’re done!

Do you have any metal furniture pieces that you’ve refinished in the past? What are your favorite refinishing tips?