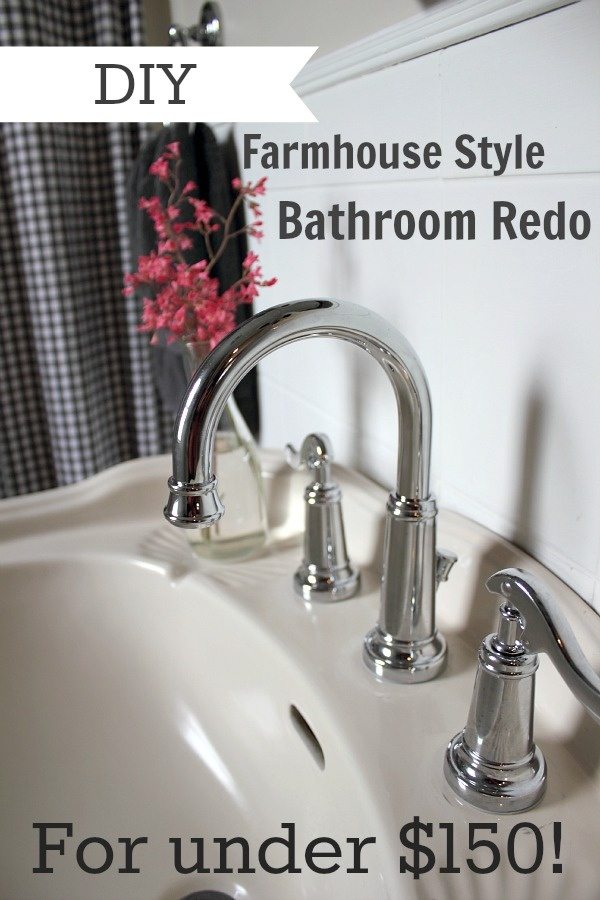 At one point when I was working on this bathroom, Chris walked in and made some joke about my lack of perfectionism. I told him he clearly didn’t understand the spirit of this bathroom makeover. This is a bathroom  on a mission!

To fully explain, let me show you how it looked in here before. 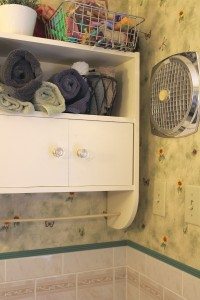 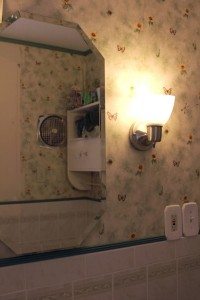 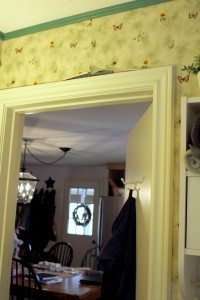 And this was the better of our two bathrooms. I’d thought when we moved in, it would be fine to leave this one for five years or so since it was pretty much in good shape, even if it was kind of ugly and had peeling wallpaper. Why put any effort into fixing it at all when we’re just going to be tearing everything out in a few years and starting with a clean slate? But then one day, I finally clued in. I missed cleaning my bathroom and actually having it feel clean. I missed being able to put out fun hand towels and have them look actually nice. I really like fun hand towels.

I realized that for just a few dollars and a few hours of my time, I could have a bathroom that I actually enjoy while we wait to be ready for the big renovation. Or at least one that felt “normal” and not completely embarrassing. Wasn’t that worth it? 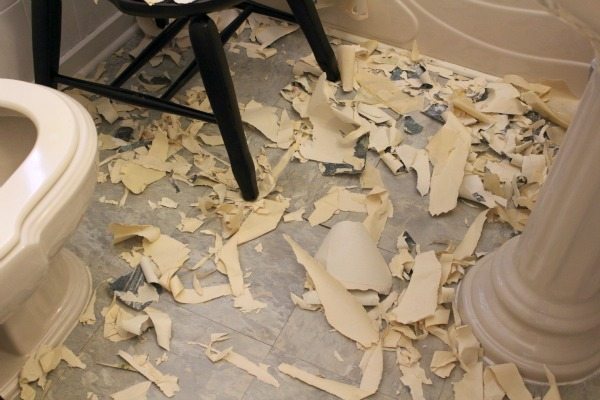 I spent a little bit of time each day for the next couple of weeks tearing down all of the two layers of wallpaper that were in there and then filling holes and sanding the walls. The walls are still super imperfect, but perfection isn’t the point. And besides, it’s an old house and that’s part of the charm. 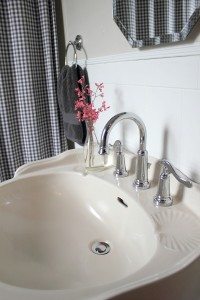 I painted the top half of the walls with some leftover paint from our last house and then I did something really crazy. I ran out to Walmart and grabbed a $13.88 can of white recycled paint in a matte finish and used that to paint my tile. Regular ol’ paint. Cheapo regular ol’ paint, at that. And I love it! But I think that’s a post unto itself. I’m sure I’ll get lots of people who don’t believe that I actually did it (about three months ago now actually) and got away with it. But I did and I am!

After that I got to have fun, just in the same way that I would have if we’d done the full bathroom reno that we’re planning on doing eventually, when we figure out what we actually want.  Even though all these little details were fun to play around with, the biggest difference maker was the white paint on the tile. Even if I’d only done that one thing, I would have been thrilled with this bathroom. 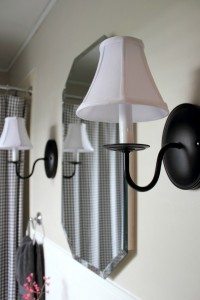 New sconces were my biggest splurge, but even they were a super deal. I wanted some just like this, but the lady at my lighting store was having a hard time finding any for me. Then she remembered that she may have some in a storage facility on the other side of town leftover from three years ago or so. And she did! The best part? Today’s prices for something like this seem to be around $95 each, but I was charged at the price from three years ago, which was $49 each. Deal! 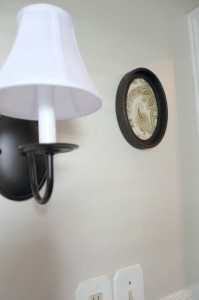 I picked up a couple of oval frames from a thrift store for about $4 each and just put some scrap fabric in them for art. I wanted the ovals to go with the sconces and also because they felt like a bit of a nod to the time when the house was built, in 1900. 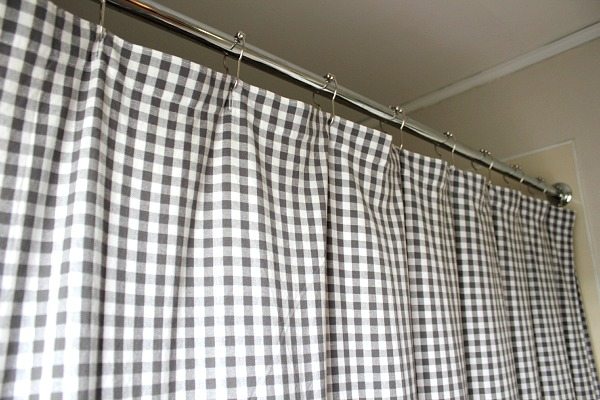 I reused my shower curtain that I’ve had for the last couple of years. 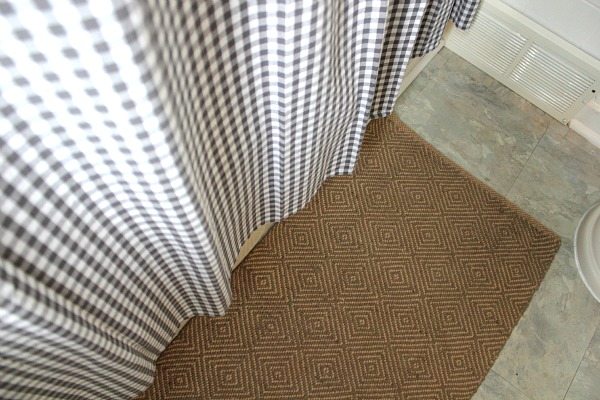 I decided to leave the floors as they were because the thought of combining all that steam with paint and then walking on it seemed like a bit of a dangerous situation and they’re pretty neutral anyway. I bought myself a new $12 rug from Target instead and I was happy.

Our non-white toilet doesn’t seem so problematic now surrounded by all that painted white tile. 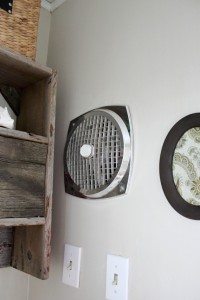 Chris thinks this fan on the wall is the dumbest thing ever, but I actually think it’s kind of cute. I just painted the yellow plastic part in the middle white and now it’s good as new! 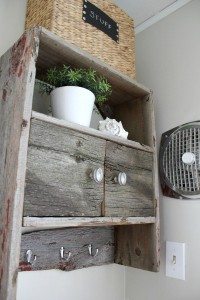 Chris built me this cabinet by disassembling the old one and using the hardware to hold together this new one made from barn wood. Note the oval handles. Details! 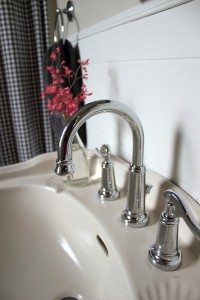 After a lot of trial and error, I can safely say that the new faucet is kind of magnificent as well. Pfister provided it to us free of charge for this project, so that was an amazing stroke of luck and kindness. I would still love this bathroom without it, but the faucet really is the icing on the cake for me. 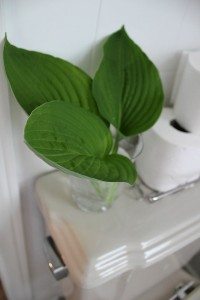 I thought I was going to enjoy just having a normal, neutral bathroom, but with all the little touches we’ve added I actually love it more than I thought possible. It’s little bathroom that could!

So what is this bathroom’s mission then? Well, the point is this: We all have reasons not to make our spaces into something that we can really enjoy every single day. Maybe we don’t want to waste time and money while we wait for that big reno, maybe we just don’t think we can afford to live in something that we find comfortable, maybe we feel like if we’re not going to do it the right way, we might as well not do it at all. So we just wait and cringe a little every time we look around. We could be cringing for 20 years! 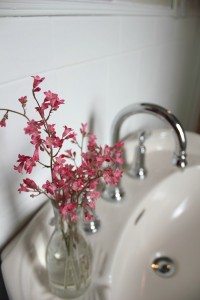 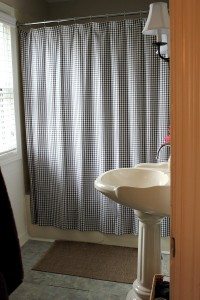 And now I have a bathroom that makes me say “Aah!” instead of cringing every time I walk it. It was worth the $13.88 can of paint.