This is a Sponsored post written by me on behalf of Walmart. All opinions are 100% mine. 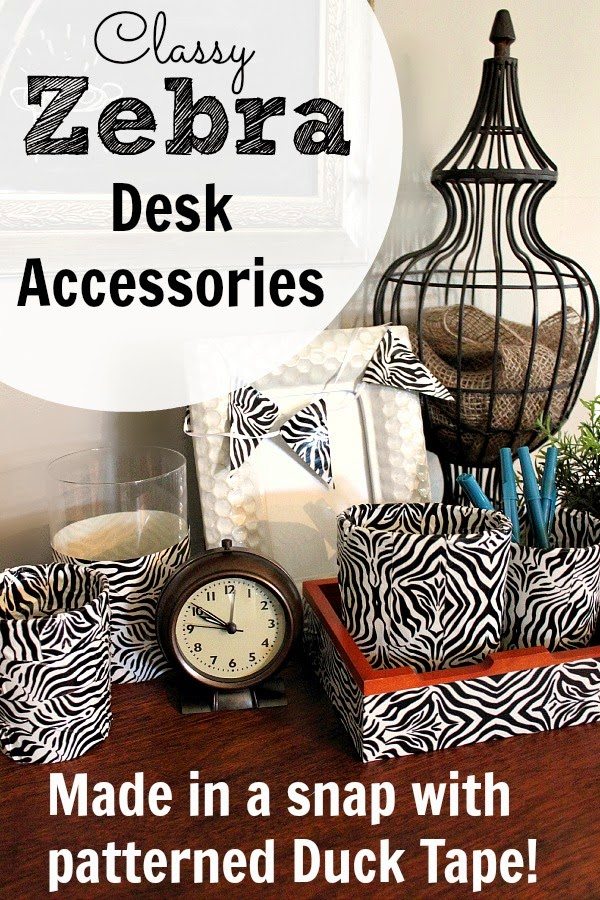 That’s right. You read correctly. The words “Duck Tape” (®) and “Classy” were both used in the same sentence. Or at least in two adjacent sentence fragments. Let me tell you, I was thoroughly pleased when I went to buy Duck Tape for this little project and found this great classic pattern.

I found tons of bright colors in different solids and patterns, but when I saw this zebra print, my project idea was locked in. 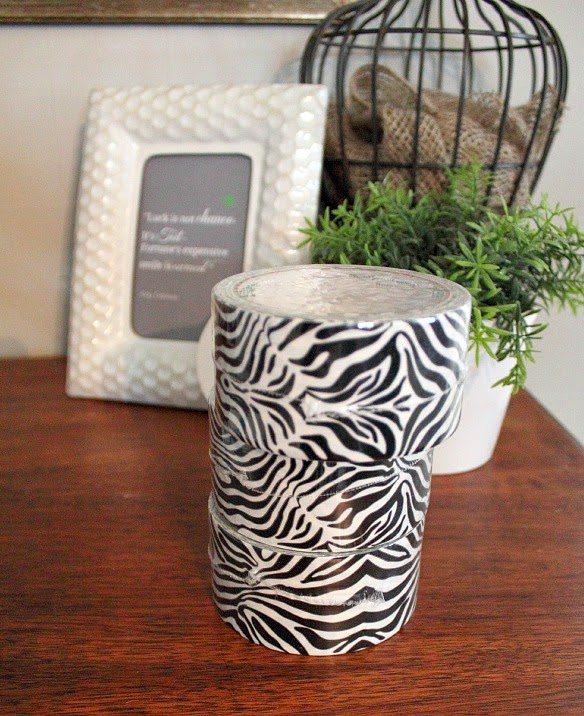 We’re in the preliminary stages of working on Kennedy’s soon-to-be zebrafied room, so I knew I had to try making something fun for that. And then once I got started I couldn’t stop and I wanted to…

Zebra all the things!

But first I started with a few desk accessories for the built in desk/book shelves that Chris just built in there. 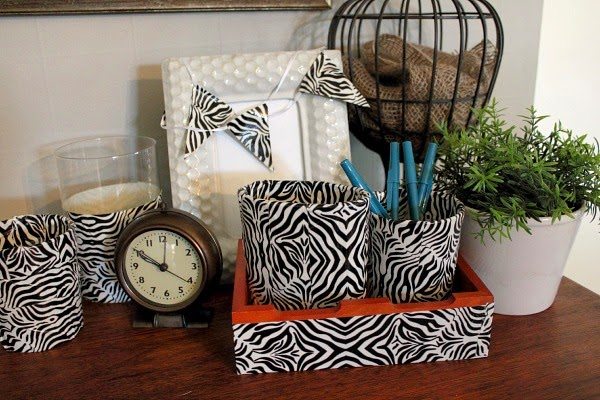 I let Kennedy help me out to start with, but because I’m secretly a terrible person, I thought I’d end up having to just quietly throw out/set aside whatever she made and then actually use what I made because of course it was going to be totally disastrous. There would be too much stickyness. There would be tape sticking to tape. There would be temper tantrums. And Kennedy would probably have a bit of a hard time working with it too. (ha!)

Duck Tape® was so easy to work with and the fact that the tape is all crazily patterned made it so easy to smooth down and hide any little bubbles and blips that we had where the tape wasn’t perfectly placed. 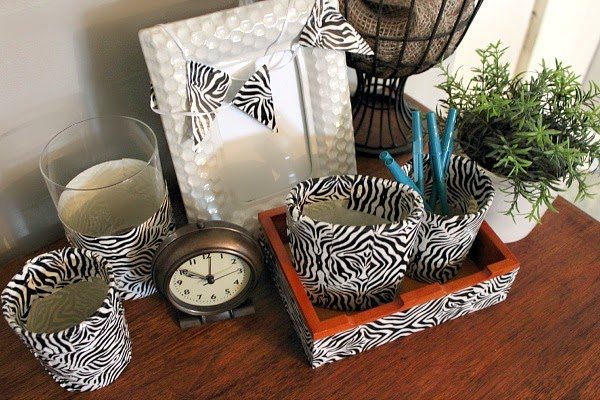 In fact, Kennedy made most of these pen cups, vases, and trays herself. You can’t tell, but I had a look of triumph on my face while I was taking this picture. Using child labor to complete your blog projects will do that to you.

So here’s what we/she did!

Step 1) We put some tape on some cups/vases/and an old wooden tray/box that I think used to be part of a doorbell. For the vase, we only did the bottom half and left the top half with the glass exposed for added classiness and so we can have a bit of sparkle mixed in there.

Step 2) We admired our handy work.

Really, that’s pretty much it.

A few tips for you though:

First of all, don’t stress over perfection, you really won’t see almost any mistake you can make with this tape. Also, if you’re doing cups, it looks a little better in the end if you run the strips vertically down the sides rather than try to go around horizontally, but even then, just go where the wind takes you. It doesn’t matter much. Also, also, if you have a project in mind, you probably won’t need as much tape as you think. I only used about half a roll for all the desk stuff, and I was thinking three rolls might not be enough when I started out. You will, however, find uses for any extra leftover tape!

So now I get to zebra more things!

I’m so happy with how these desk accessories look kinda soft and leathery rather than shiny and plasticky. I think they’d look just as much at home in a sophisticated home office setting for an adult animal print lover, as they would in a funky tween bedroom.

I got to thinking and started playing around a bit after the success of the desk zebrafication and I made a couple of little bunting banners too. 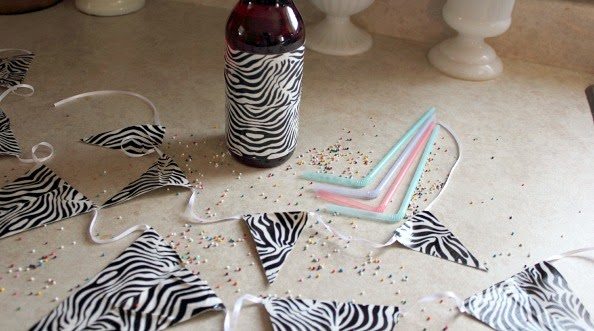 Kennedy’s got a birthday coming up and now I know what I’m doing for decorations! Basically, I’m going to put tape on everything and then everyone will admire me and be so amazed at all of my co-ordinating decor and my handiness. I shall henceforth be known as the cool mom! Confetti will rain down on me wherever I go!

OK, possibly not, but the party should at least look fun.

It’s like hitting the easy button, but in tape form. Where has this been all my life? 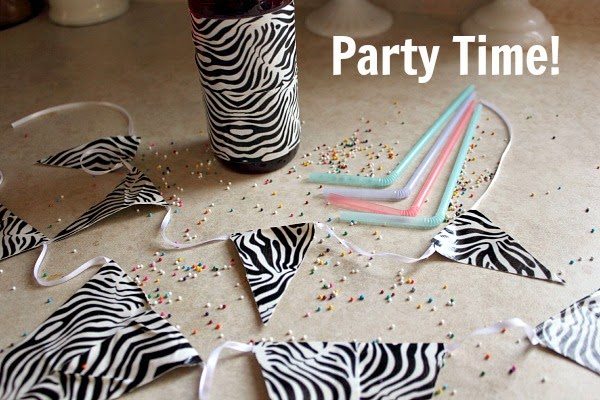 So, if you want to make your own adorable 28 second buntings, here’s how:

For the mini one, I just folded a piece of tape in half over a thin ribbon at each spot that I wanted a little flag and then I trimmed it into a triangle. Bam! One done.

For the larger sized one (I’m calling it “normal size” but I don’t really know if there is a “normal” size when it comes to these things), I folded two pieces of tape in half over the ribbon, but for the second piece, I put it right next to the first and made sure it overlapped just a bit. Then I trimmed the flags all into triangles and instant festiveness occurred. 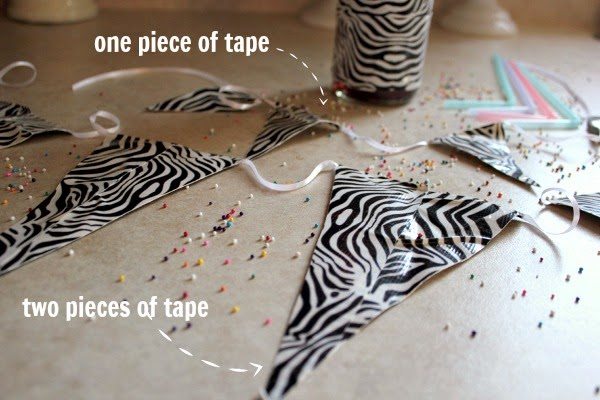 So that’s what I’ve done so far with my zebra Duck Tape®! I still have like a million rolls left though, so watch out! The world isn’t yet safe from my zebrafying ways!